Some classic Russian films are impressive, others are interesting — and this one takes our heads off, as if we were seeing great moviemaking for the first time. Soviet filmmaking under Stalin was locked in the grip of stifling bureaucratic sameness; Mikhail Kalatazov waited until the passing of Joe Stalin to direct with a degree of freedom. This show about lovers separated by war won prizes around the world, giving Soviet films new life internationally — its bravura montages and fluid camera set pieces still astound. 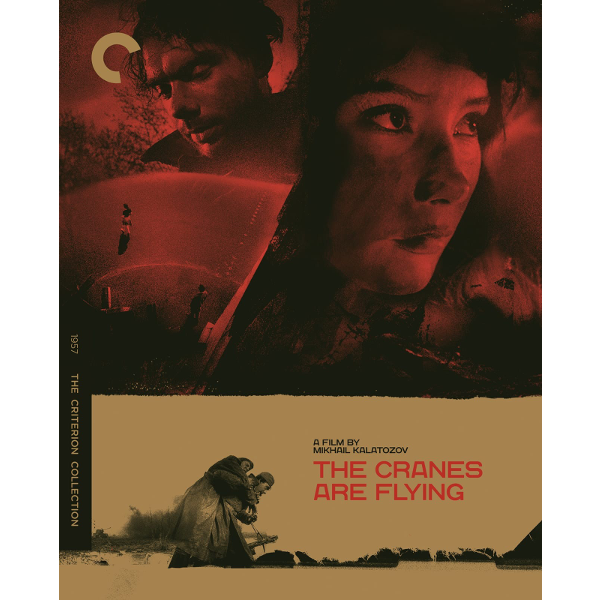 Yes, we saw a lot of pictures in film school, and a benefit of that was gaining an appreciation for cinematic achievements of all kinds, from Duck Soup to Last Year in Marienbad. But a real exception was an afternoon screening of the Soviet The Cranes are Flying, which grabbed the student audience and knocked us for a loop. Mikhail Kalatozov’s bittersweet tragedy has everything: an astonishingly expressive leading lady, camerawork and editing the likes of which we’d never seen, and a story of universal appeal. Sure, sure, it’s another Soviet film about the sacrifices of WWII, the ‘great patriotic war,’ but the emphasis is on personal lives and feelings, not collective slogans.

Just a few years earlier, many Soviet export films had been created as propaganda weapons for the Cold War, and our State Department routinely blocked their import. The Cranes are Flying practically re-introduced Russian filmmaking to the international cinema stage. After winning a top award at Cannes it played all over the United States, proving itself a major art movie hit, one of the most popular of its time. It’s an emotional tale of love, war, separation and loss told with breathtaking cinematic precision. The performances are pretty nigh unforgettable, especially that of the lead actress, Tatyana Samojlova. It’s a lot of people’s favorite Russian movie, by far.

The story is the age-old tale of separation and loss. Veronika (Tatyana Samojlova) is in love with the artist Boris (Aleksei Batalov). His cousin Mark (Aleksandr Shvorin) works a trick to avoid the draft, but the patriotic Boris volunteers to go off to war, even though he has a legitimate deferment. Veronika is shattered when The war turns everything into chaos — total mobilization puts a strain on all relationships. Veronika’s parents are killed in a bombing, so she moves in with Boris’ family. There the pressures of war and repeated air raids throw her into the arms of the less-than-ethical Mark. They are married to the dismay of just about everyone, including Veronika herself. The German invasion prompts a mass evacuation — people, industries — to the East. While the displaced Muscovites try to hold things together, Veronika can’t disguise her misery and self-hatred. Has Boris been lost in action?

With director Kalatozov we’re in good hands from the very beginning; inside the formal visuals, the performances are delightfully warm and human. Composition-wise, we see classic Eisenstein stylistics. Strong diagonals inform a scene on a giant bridge and expressionist lighting intensifies the clincher close-ups of the two young lovers. But nothing can overwhelm the performance of the stunning Tatyana Samojlova, who carries the film with an intensity to rival any Western actress. The dark-haired, smiling beauty is never a simplified ‘girl in love’ — her teasing and bossing of the likeable Aleksei Batalov (of the inspiring science fiction drama Nine Days of One Year) evokes a full personality demanding to exist on its own.

The flight of cranes is used as a symbol of the purity of Boris & Veronika’s love, but the screenwriter Victor Roszov is quick to show love as an endangered emotion in a crazy world. Not a minute into the movie, the lovers stare at the birds in the sky — an action that causes them to not notice a water truck heading their way. They don’t see the World War coming, either.

Samojlova’s Garbo-caliber face seems to plug directly into the viewer’s emotions. It’s fascinating to watch her expressions, whether radiating joy or narrowing her catlike eyes with internalized pain. Veronika experiences one emotional extreme after another, and Smojlova’s performance reminds us of a less glamorized, more lifelike Jennifer Jones. The fine liner notes by Chris Fujiwara tell us that director Kalatozov spent some of the war as a liaison in Hollywood, and the comparison of the intensity of his show to the emotional heights of King Vidor’s Jennifer Jones movies is an apt one. 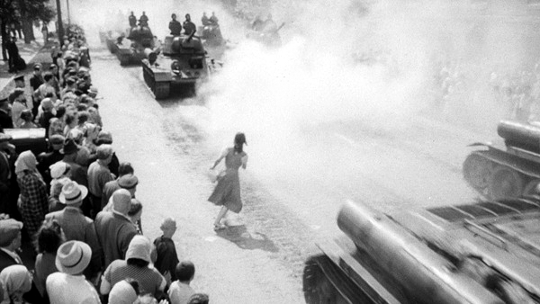 The Cranes are Flying looks like a young man’s film, but it’s by a middle-aged talent. We learn in the extras that Kalatozov was directing accomplished films until the early 1930s, at which point he became a film bureaucrat for twenty years. He must have decided that it was wise to lay low in the Stalin period, when many individualist artists were ‘disincentivized’ for bizarre political reasons.

The movie’s emphasis on personal, individual concerns could only be made during Khrushchev’s cultural thaw. It is painfully intimate yet staged on a grand scale, with sweeping crowd scenes that take one’s breath away. Knowing that everything we are seeing in Cranes is physically real, makes Kalatozov’s camera gymnastics ten times more exciting. Audiences gasped at the trucking and crane shots for Boris’ farewell scene, in a huge mob on a Moscow boulevard. Veronika is desperate to see her beau before he goes away. Sergei Urusevsky’s camera starts on a bus, pursues Veronika through a crush of people and finally soars upward when she runs into the background through an onrushing phalanx of tanks. These expressive flourishes serve the emotional flow of the story — the gimmick-oriented CGI-driven one-take uncut sequences in today’s films do not begin to compare. 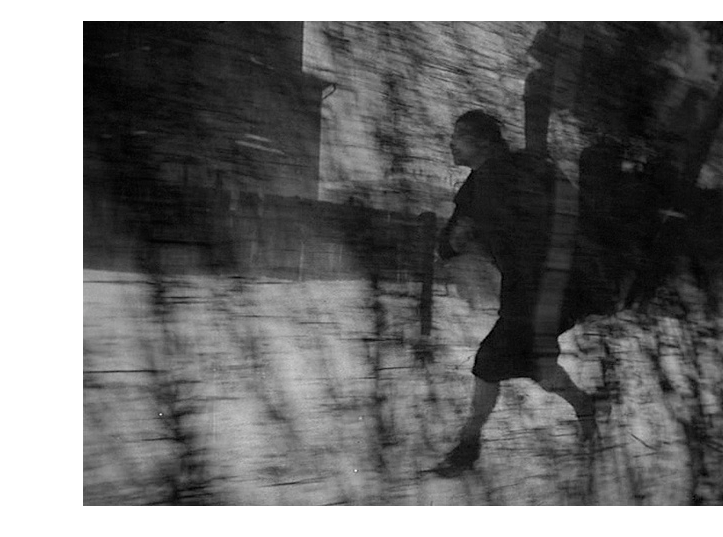 Kaltazov balances his dazzling no-cuts sequences with wild montages that raise expressionist editing to a new level. Again, these bursts of cinematic frenzy are saved for emotional highlights. When Veronika flees a veteran’s hospital in a delirious panic, Cranes brings back the cinematic power of silent moviemaking. As she runs, handheld angles break the image into expressionistic blurs seen through picket fences or jittery clusters of shaking tree branches. ( → ) We’re reminded of Dimitri Kirsanoff’s Ménilmontant, with its psychological, ‘shattered’ editing patterns. The ‘running behind the slatted fence’ shots create a strange subliminal effect, warping our perception of the motion, like a reverse Zoëtrope. It’s more intense than comparable experimental film work, because the effect is in service of the narrative’s emotional drive. If I remember correctly, G.W. Pabst’s silent classic The Love of Jeanne Ney has an identical ‘slatted fence’ sequence. Kalatozov brought back gloriously effective cinematics that had been long abandoned. (Jeanne Ney is due out soon on Blu-ray, so I’ll find out if I ‘dreamed’ the resemblance.) 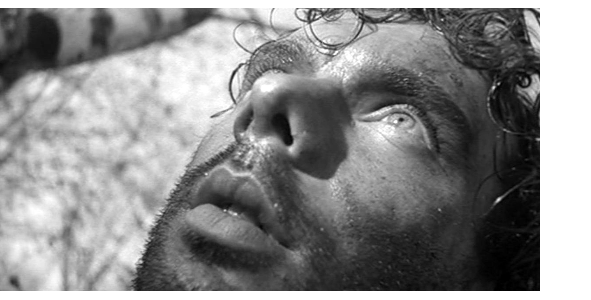 Yet another distinctive montage is an optical sequence with Boris in combat, expressing his delirious, fragmented thoughts at a moment of maximum stress. Overlapping superimpositions present his idealized vision of a future wedding with Veronika. The beautifully designed series of overlapped dissolves bests anything done by Hollywood — especially in 1957. Each of these segments is less than a minute long, but after each one you think, “That’s the best sequence of that kind I’ve ever seen.” The director / cameraman team of Kalatozov and Urusevsky later collaborated on the knockout exercise for moving camera known as I Am Cuba. It’s an impressive picture, but once again places political messages first and is less affecting. 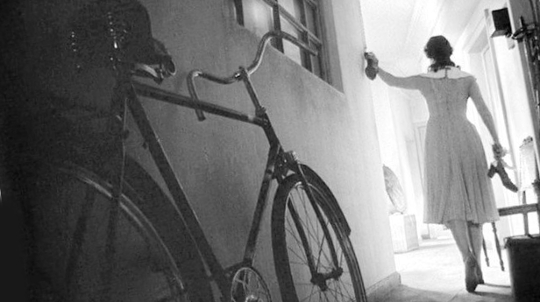 The acrobatic camera work never displaces Veronika’s emotions from the center of our interest. Much of the drama of The Cranes are Flying revolves around her (perverse?) decision to take Mark as first a lover, and then a husband while still being in love with Boris. Unlike so many other dogmatic Soviet pictures, at several junctures Cranes contradicts the Soviet party line with personal opinions. The girls from the factory bring official salutations from the working comrades, but readily admit that their personal feelings are much more important to them. Boris’ doctor father (Vasily Merkuryev) at first seems a ‘backbone of the revolution’ sort of guy. He helps a heartbroken patient whose girl has ditched him by making a public address in the ward, loudly berating all ‘worthless women’ who desert soldiers doing their duty. Veronika is present, and it shatters her. But later on father is the first to understand Veronika’s emotional plight; his previous speech was just to give the boy back his pride.

Sentiment ends up the focus of Kalatozov’s camera, and Crane’s finale is one of the most emotionally moving ever. When Veronika finally finds peace with herself, it’s in a vast crowd of Russians rejoicing in the return of their loved ones at the war’s end. With deep oaths to maintain the peace and to save mothers and children, the elaborate trucking shots show us dozens of happy faces swimming around Veronika as she gives out flowers one by one, sublimating her own heartbreak. The honesty of the emotions evoked is overpowering. Event though it ends in a grandly collective gesture, Kalatozov’s film isn’t propaganda. Honest emotion tops political message-making at every turn. The powerful finale earns its tears, like the worthy humanist films The Crowd, or The Search. 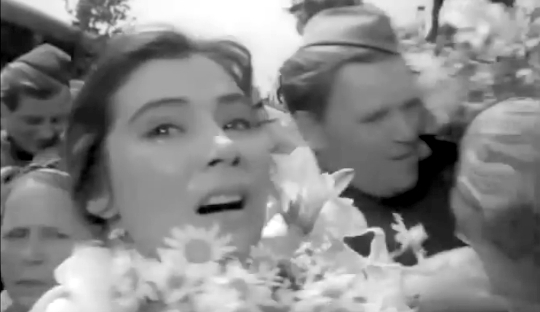 The Criterion Collection’s Blu-ray of The Cranes are Flying is a knockout restoration of this great picture, that bests by far Criterion’s old DVD from 2002. The image is clean, rich and stabile; as you might expect from my descriptions above, the intense close-ups of Tatyana Samojlova are astonishing. She’s fine in Kalatozov’s follow-up feature Letter Never Sent (1960), but her more complex fate in that show is not as emotionally devastating. Her Anna Karenina (1967) is highly rated as well.

Criterion’s disc producer Elizabeth Pauker retains the Chris Fujiwara essay from the 2002 release — that edition’s only extra. The new extras constitute an education in the development of the Soviet cinema post-Stalin. Ian Christie hosts an illuminating overview of both Kalatozov and the ‘new wave’ of (relative) freedom that arrived in the Khruschev era. Michael Kalatozov is heard in a 1961 audio interview, illustrated with images. A 2009 documentary examines the director’s career under Soviet supervision; and other docus and featurettes about the film’s cinematography and its 1958 premiere. In one piece, a Kalatozov crew member revisits Havana, to show where scenes from I Am Cuba were filmed.

One of the extras takes us behind the scenes to see a remarkably clever, elaborate device engineered to obtain a single shot in The Cranes are Flying. A custom spinning elevator camera rig is seen in action filming a bravura staircase sequence. It’s really impressive.

The Cranes are Flying
Blu-ray rates:
Movie: Excellent
Video: Excellent
Sound: Excellent
Supplements (from Criterion): New interview with scholar Ian Christie on why the film is a landmark of Soviet cinema; Audio interview from 1961 with director Mikhail Kalatozov; Hurricane Kalatozov, a documentary from 2009 on the Georgian director’s complex relationship with the Soviet government; Segment from a 2008 program about the film’s cinematography, featuring original storyboards and an interview with actor Alexei Batalov; Interview from 2001 with filmmaker Claude Lelouch on the film’s French premiere at the 1958 Cannes Film Festival. Insert folder with an essay by critic Chris Fujiwara.
Deaf and Hearing-impaired Friendly? YES; Subtitles: English (feature only)
Packaging: One Blu-ray in Keep case
Reviewed: March 5, 2020
(6219cran)