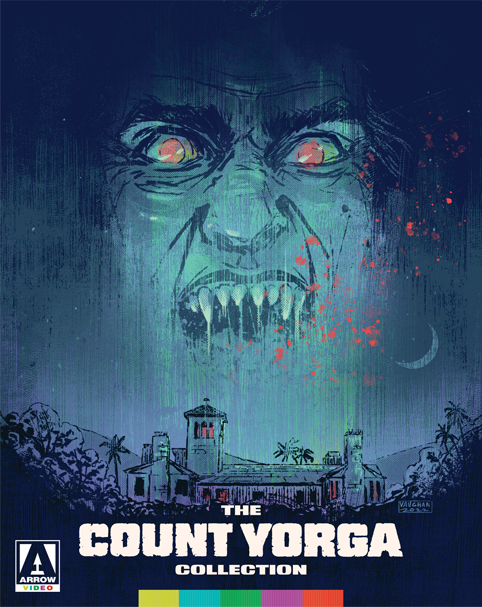 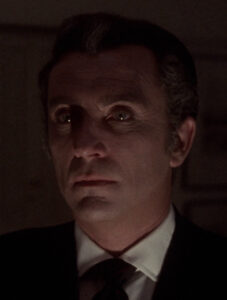 An aristocratic bloodsucker from the old country is the main attraction of Bob Kelljan’s Count Yorga, Vampire, but what drives the movie is an actual motor, a 1969 Volkswagen bus with a blood red trim. That amiable vehicle, the stoner’s favorite mode of transportation, is front and center in several pivotal scenes (Yorga even hitches a ride) and comes to symbolize the film’s premise; an old-fashioned vampire at large in The Me Decade. The set-up is ripe for a satire like Joe Dante’s The Howling, but instead of taking the stuffing out of horror movie cliches, Kelljan is dead serious about the undead.

Robert Quarry plays Yorga, a vampire whose standard uniform of cape and tuxedo sets him apart from the more casually dressed Angelenos—nevertheless this well-traveled ghoul understands that the locals are just as superstitious as his neighbors back in Transylvania. Yorga advertises himself as a medium, ostensibly to connect the bereaved to their dearly departed, but he’s really using his crystal ball as bait for new victims—the prettier, the better (the original title was The Loves of Count Iorga). Currently in his sights is Donna Anders who plays a young woman aching to see her late mother—she doesn’t have far to look, mom is currently occupying space in the basement as a member of Yorga’s vampirized harem. 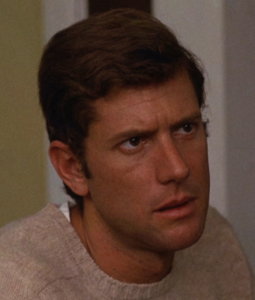 Kelljan was also the screenwriter and he wisely kept his story simple, even if his dialog is from hunger. As soon as Yorga is finished with Donna he works his way through her small circle of friends, knocking them off one by one until Dr. Hayes, an ersatz Van Helsing played by Roger Perry, takes matters into his own hands. Michael Murphy has a prominent role as one of the star-crossed co-stars and the actor, on his way to becoming an Altman regular in that year’s MASH, is in his element as the wisecracking boyfriend of Judy Lang, one of Yorga’s future victims.

Part of Murphy’s easygoing manner might have been due to his confidence in Kelljan: the fledgling director exhibits a real command of his material. A busy actor in the sixties in Psych-Out and Hell’s Angels on Wheels, Kelljan paid extra attention to the mechanics of those low budget exploitation films; he contrived a budget-friendly script for Yorga and his direction is far better than it has any right to be—the film cost under $100,000 and took less than two weeks to shoot. He also carefully removed a few salacious scenes to qualify for the more desirable GP rating inaugurated that same year (“Suggested for General Audiences, but Parental Guidance is Advised”). Kelljan’s skill surprised critics; the modest little thriller received positively glowing reviews. Kelljan had more surprises up his sleeve, his movie was a runaway hit which led to the hasty revival of Yorga and a trip up the coast for The Return of Count Yorga. 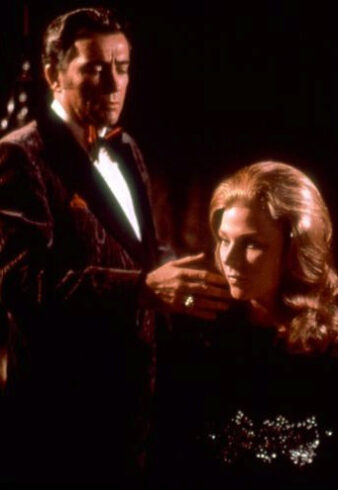 Kelljan and Yvonne Wilder wrote the script which teases fans with an intriguing premise: an orphanage located in a bucolic Bay Area locale is infiltrated by Yorga and his ever-expanding band of vampire brides—as the industrious fiend seduces the more comely school teachers he turns the younger students into supernatural go-betweens.

Kelljan had an eye for talent, his co-writer Wilder—who also plays a small role in the film—had already enjoyed success as a broadway performer, starring as Anita in West Side Story and as Consuelo in the film version. Mariette Hartley, her star still rising, plays Cynthia, a teacher at the children’s school and Yorga’s latest obsession. Kelljan’s smooth direction is one of the film’s few saving graces but even Craig T. Nelson’s film debut—he plays a comical cop—and the work of cinematographer Bill Butler (Jaws, The Conversation) can’t distract from the thin story and Yorga’s repetitive exploits. The critics were far less kind to Yorga’s comeback—after greeting the original as a welcome sleeper, The Return of Count Yorga was a veritable punching bag for reviewers (Roger Ebert devoted his entire review not to the movie, but the derisive laughter in the theater.) 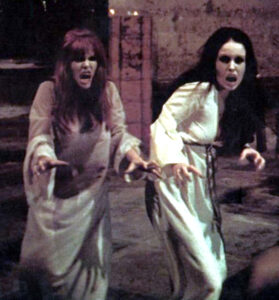 There are still plenty of Yorga fans among us, and Arrow Video should make them very happy with the release of The Count Yorga Collection. The movies themselves look terrific with vivid color and great detail. The two disc package includes two new commentaries from Tim Lucas and Stephen Bissette, a multitude of specially produced documentaries and interviews, including an illuminating chat with actor Michael Murphy. The highlight might be an encounter with Frank Darabont in which The Green Mile director recalls his first look at Count Yorga as an impressionable 11 year-old.

Complete details on the extras and more can be found here at Arrow’s site. 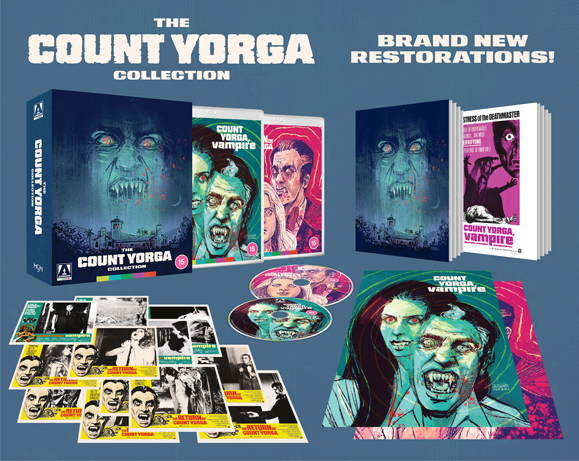 Here’s Mick Garris on Count Yorga, Vampire, and The Return of Count Yorga: