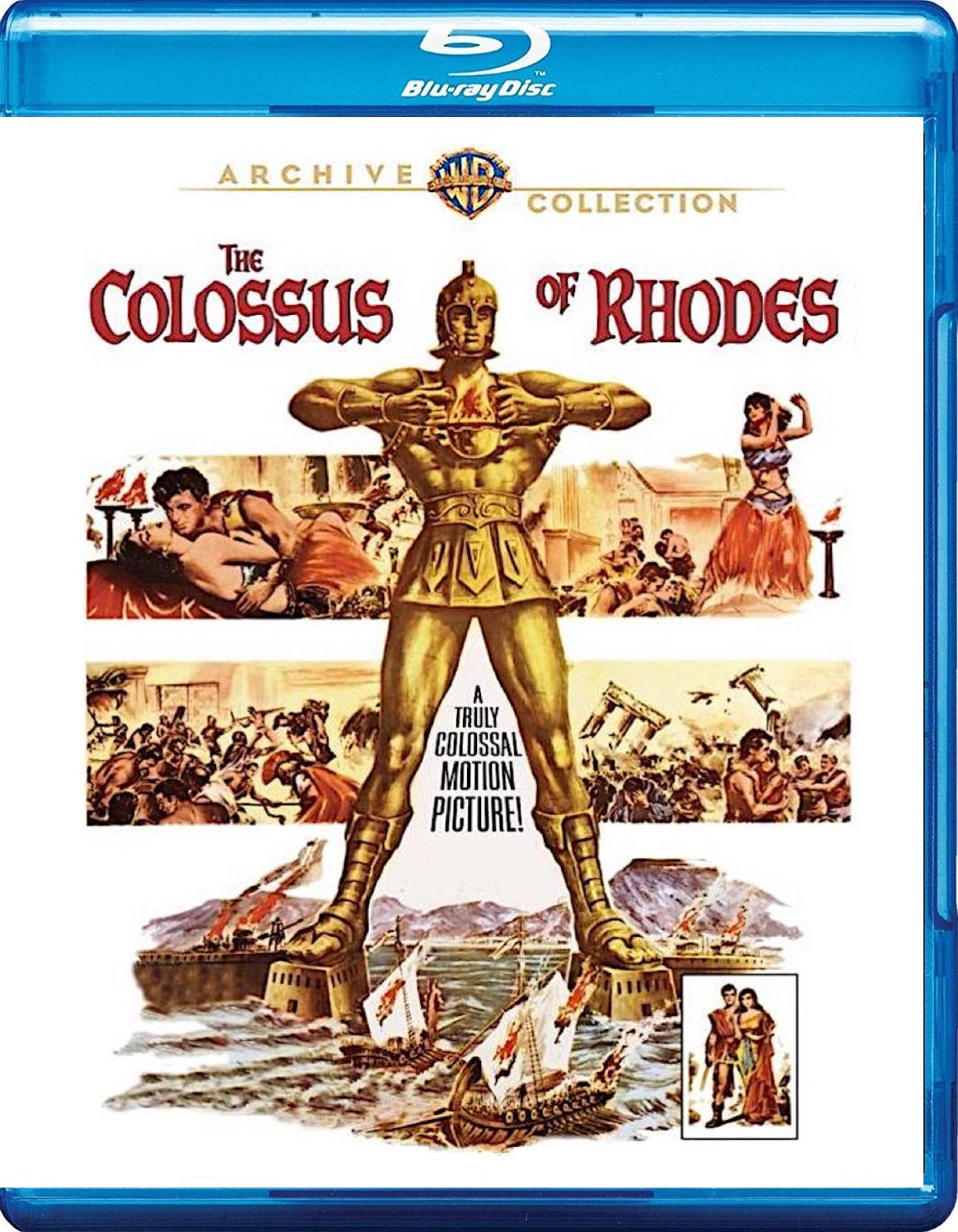 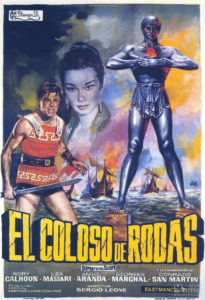 Fred Astaire once said of an undulating Cyd Charisse, “She came at me in sections.” So does the star of Sergio Leone’s The Colossus of Rhodes, a 300 foot titan whose sky-scraping vertical stance is at extreme odds with Leone’s widescreen frame. Save for some long shots, one of The Seven Wonders of the World is reduced to a slide show of disconnected body parts. Such are the giant-sized headaches of epic movie-making.

Even before an earthquake would wreak havoc on the community and topple the Colossus in 226 BC, Rhodes was a city in turmoil. Darios, a Brylcreemed military hero and would-be romeo has just dropped anchor but in lieu of a warrior’s welcome, he’s immediately ensnared in a two-pronged plot to overthrow Rhodes’ dictatorial king.

Those warring factions have the same end game but different motives: a band of rebel insurgents looks to regain their democracy while the king’s two-faced lieutenant, Thar, is hard at work on his own power grab.

The usurpers use every bit of the island to do their scheming including the palace halls and bed chambers, the catacombs beneath the city and, most spectacularly, the interior of the bronze giant itself – weaponized with catapults and the capability to douse passersby with molten lead, it doubles as a deterrent for unwanted visitors and desperate escapees.

The palace intrigue reaches a boil compelling Darios to drop his womanizing and lead the rebels in a bloody showdown with the king and the evil Thar, their sword-clanging battles spilling out into the throne room, the colosseum and, acrophobes beware, up on the broad shoulders of the Colossus where less sure-footed combatants perform ill-fated swan dives into the Mediterranean.

The action is predictable, the plot line is rote and the acting is pure Provolone – but Leone, in his first credited opportunity as a director, makes sure that the staging and production design combine for a visually dynamic experience – filmed in the awe-inspiring port of Laredo in Spain, this is one of those movies, like Metropolis or Blade Runner, where the architecture is more interesting than the actors.

John Derek was set to play the role of Darios but made a hasty retreat, opening the door for human toothpaste commercial Rory Calhoun. A couple of years later Leone would transform another small screen cowboy into an international movie idol but no such magic transpired with the star of TV’s The Texan.

The rest of the cast is fleshed out by sword and sandal perennials like Georges Marchal, Conrado San Martín (still active in films) and, thankfully, the cat-eyed Lea Massari as the duplicitous Diala. The sultry actress graced both Antonioni’s L’Avventura and Malle’s Murmur of the Heart and her sinuous presence gives the citizens of Rhodes a much-needed reason to fight for their country.

Leone’s secret weapon was Ramiro Gómez, the production designer behind 1959’s The Last Days of Pompeii. Antonio Ballesteros handled the colorful but somewhat pedestrian photography and the barrel-chested score was courtesy of the remarkable Angelo Lavagnino whose typically rousing melodies kickstarted films from Gorgo to Chimes at Midnight.

The Colossus of Rhodes has always been an outlier within its own genre – when it was released in December of ’61, even its trailer felt markedly different than the Steve Reeves-ian product invading Saturday matinees every other weekend. There was an appreciable sense of gravity about the film, perhaps because the ultimate toppling of its star attraction was a bracing reminder of how far the mighty can fall.

The new Blu ray from Warner Archive does nothing to change the film’s outsider status. The image is very nice but not really approaching the brilliance and clarity of a “Totalscope” experience. Equally grating is Warner’s recycling of the cut version of the film (the original Italian release was 139 minutes – stateside audiences saw a 128 minute contraction). European Blu rays with the uncut version exist but they lack subtitles. Calling all Rhodes Scholars… we need a proper presentation of Sergio Leone’s monumental Colossus.