Vincente Minnelli took a break from musicals to feature Judy Garland in the first movie to show her dramatic acting range, a charming and thoughtful wartime tale in New York: a whirlwind romance goes from nothing to marriage in 48 hours. She’s a working woman and he’s a soldier shipping out for combat; the miracle is that the whole thing is believable, and resolutely unglamorized. The illusion of ‘ordinary life’ in NYC is remarkable for 1945; star Robert Walker leaves behind the gangling bumpkin character he’d been playing. The Warner Archive’s Blu-ray is a welcome addition to the Minnelli disc library. 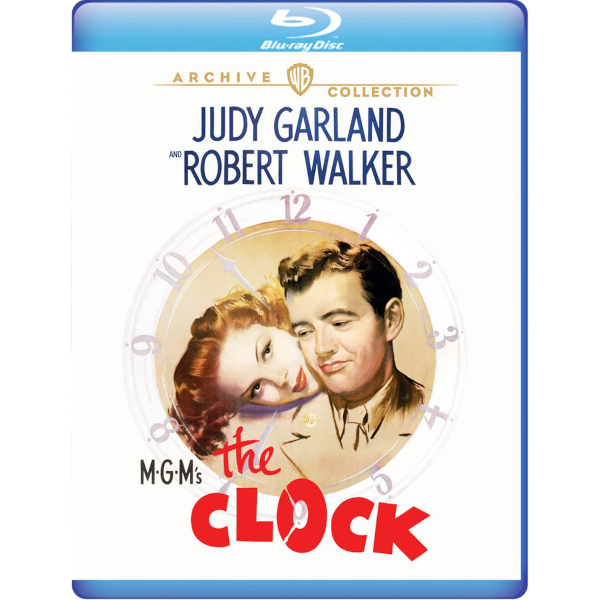 The unusual New York romance The Clock was for quite a while one of the more fondly remembered movies of the war years. While other homefront movies presented soap operas about patriotic families standing firm under home front pressures, this engaging romance underplays the story of a fateful 24-hour pass. A lonely soldier finds a girl and the whole world changes for them both. We’re told that it’s the first non-musical by director Vincente Minnelli. He comes through with a special item, and gets extra points for not flubbing the direction of a star with whom he had fallen in love.

Judy Garland shocked her fans by not singing in The Clock; her Alice Mayberry is just an ordinary girl unprepared to encounter the love of her life. Robert Walker discards his awkward See Here, Private Hargrove persona to sympathetically play a stranger on leave among New York’s intimidating skyscrapers. Director Minnelli tries his best for a naturalism that goes against the MGM house style. He’d marry his star Garland soon after completing the film; critic James Agee announced that fact in his review for The Clock in Time magazine.

Starting his two-day-pass, Corporal Joe Allen (Robert Walker) is intimidated by the Big Apple until he encounters Alice Mayberry (Judy Garland) on her way home from work. Despite following Alice like a puppy dog Joe manages a favorable impression. She cancels another date to have dinner with Joe, and their walk in Central Park becomes one of those ‘is something happening here?’ dates. Their adventures continue as they hitch a ride on the milk truck of Al Henry (James Gleason). A drunk (Keenan Wynn) gives Al a black eye, so the pair spend the rest of the night finishing the milk run. The next day they lose each other in the subway — each despairs so much that when they miraculously find each other again, they become determined to get married. That means running a gauntlet of Manhattan red tape to secure a license, get blood tests and obtain a waiver for the 72-hour cooling off period. 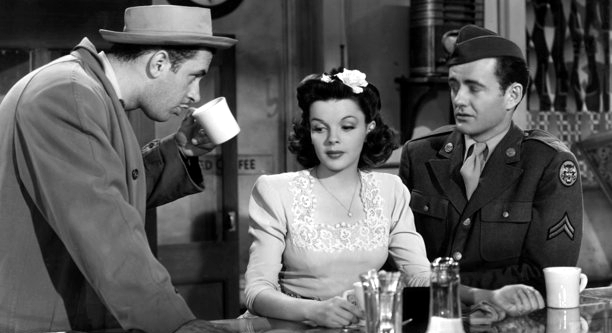 One can see Vincente Minnelli itching to try something new in The Clock. Many scenes play out in only one or two mastershot takes, such as the luncheonette encounter with the drunken Keenan Wynn. Most if not all of the New York scenes are done by a second unit, with Garland and Walker inserted into process photography. Yet Minnelli and his cameraman George Folsey do their utmost to sidestep the MGM sheen of unreality. Critic James Agee remarked on the film’s embrace of naturalism, even to the extreme of passing a minute in Central Park where ‘nothing happens.’ Left alone in a vacuum, the two young lovers discover that they aren’t bored.

While Alice putters around her apartment thinking about her date, the camera rests on an ordinary armchair for a few seconds, reminding us that she lives in the real world, not one designed by Cedric Gibbons. The dress she chooses is not a creation for Judy Garland, but something Alice Mayberry might believably have tucked away in her closet. James Agee really liked that detail, saying that it helped the movie’s credibility.

In this same year 1945 Louis De Rochemont began filming thrillers on the streets, but in a different Newsreel style. Vincente Minnelli may have seen Jean Renoir’s easy-going, unhurried slice of life movies, but Italian Neorealism wouldn’t arrive in New York for at least a year. The equipment didn’t yet exist to take a tiny crew onto New York streets, so Minnelli had to achieve his own anti-glamorous ‘impromptu’ style by backwards means. He used MGM’s most sophisticated production values — precise back-projection, highly detailed sets — and with cameraman George Folsey works hard to approximate the look of shooting in real locations.

The show has the use of two enormous sets, a New York railroad station (Penn Station?) and the lobby of a glamorous hotel, the Waldorf. Can we presume that the set was a hand-me-down from MGM’s Meet Me at the Waldorf, released the same year?  The milling New Yorkers on these sets are carefully rehearsed to act like real people, not trained Hollywood extras. Minnelli was highly aware of Hollywood’s passive racism: the crowds on view include many more black faces than was usual for MGM.

In one scene near the beginning takes place in Alice’s apartment with her roommate Helen (Ruth Brady) and Helen’s boyfriend Bill (Marshall Thompson). The studied performances and ‘smart’ dialogue are more like a standard Hollywood movie. As soon as Alice and Joe meet again in the lobby of the Waldorf, Minnelli returns to his more agreeable naturalistic mode. Look at the way Garland walks: she adds a slight waddle into her step, so as to be less like the idealized girls of her earlier MGM vehicles. 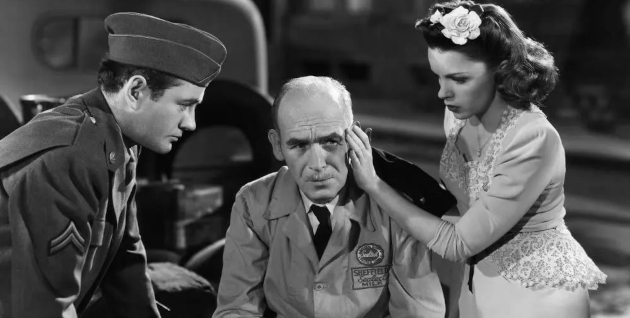 The story keeps the sweethearts’ conflicts as simple as possible and finds a good balance between sentiment and realism. Joe proves that he really wants that dinner date by sprinting alongside Alice’s bus. Their rash decision to get married comes after they’re accidentally separated. Alice is crestfallen when she realizes that she can’t trace Joe, because she hasn’t even learned his last name. Their mutual panic and sense of loss is enough to make up anyone’s mind in a hurry.

Contemporary reviews stressed the romantic nature of a city that loves soldiers and sweethearts, but Joe and Alice must also deal with indifference and petty interference, especially when attempting to secure a marriage license. Even the overnight ‘magic coach’ trip on a milk wagon has its drawbacks. Not only does the truck get a flat, milkman Al Henry and his wife don’t present an overly rosy, idealized example of marriage. The older couple get along well enough yet bicker like magpies.

The Clock presents an exception among quickie wartime marriages, which statistically had a low rate of success. War was a marriage catalyst for scared young guys and eager young girls. When the boys returned from their duty abroad they often found they had nothing in common with their estranged brides. Cynicism worked its way into the mix when ‘Allotment Annies’ gathered near points of debarcation. As the spouses of soldiers were entitled to monthly checks and benefits, some sharp sisters married repeatedly under assumed names, committing bigamy for profit. It’s no wonder that the USO woman has no sympathy for Alice when she can’t find Joe … many of the marriages hatched under these conditions were pitiful mistakes.

Alice’s wedding is made especially un-glamorous, and she experiences disappointment and disillusion. She breaks down in tears after her rushed and utterly romance-free civil ceremony, with no ring and a janitor for a witness: “It was all so UGLY!”  It’s nothing like the couple’s earlier stopover in a large church, that seemed so peaceful and positive. 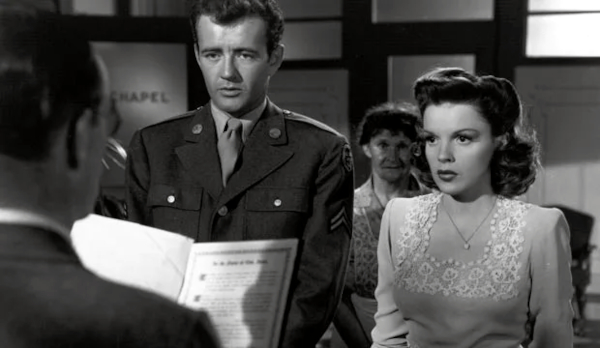 Just the same the show surely encouraged young lovers to take their chances. Alice does get her wedding night, which The Clock mercifully implies was a success. She and Joe appear to be serious kids with a deep affection for each other, and they seem almost unnaturally prepared for an immediate, lasting separation at the railroad station. When Alice strides away from what by all rights should be a sad parting, she has a big smile on her face. The future is uncertain but she isn’t afraid. Now all that remains is to write all those letters explaining to her folks — and his folks — that they’re married.

Minnelli finishes with a crane shot that pulls back into the rafters of Penn Station, as Alice disappears into the crowd. It now makes us think of the millions of dramas attendant to my parents’ generation, most of whom had their lives defined by the war experience. James Agee was so impressed by The Clock, he predicted that it would not be forgotten even fifty years later. It’s now 77 years later, and the vast majority of people who remember the WW2 homefront are departed. The war is now most often referenced through film fans that relate to history through pictures like The Clock.

In 2010 video artist Christian Marclay premiered an art installation called The Clock, a looped video 24 hours in duration, and is meant to play synchronized with real time. It uses clips from hundreds of movies in which actors interact with clocks that display a particular time of day. It’s literally a history of filmic experience ‘watching the clock.’

The idea is that museum viewers looking at the presentation at, say 2:41 in the afternoon, will perhaps see James Stewart checking his watch, the dial of which reads 2:41. People rise for work, break for lunch, go to shows, meet to plan murders, and perhaps synchronize their watches while prepping bank robberies at 2 am. We haven’t seen Marclay’s installation. But as the films share a title, I wonder if it shows the modern clock face in the lobby of the Waldorf Hotel, with Alice and Joe meeting for their big date. 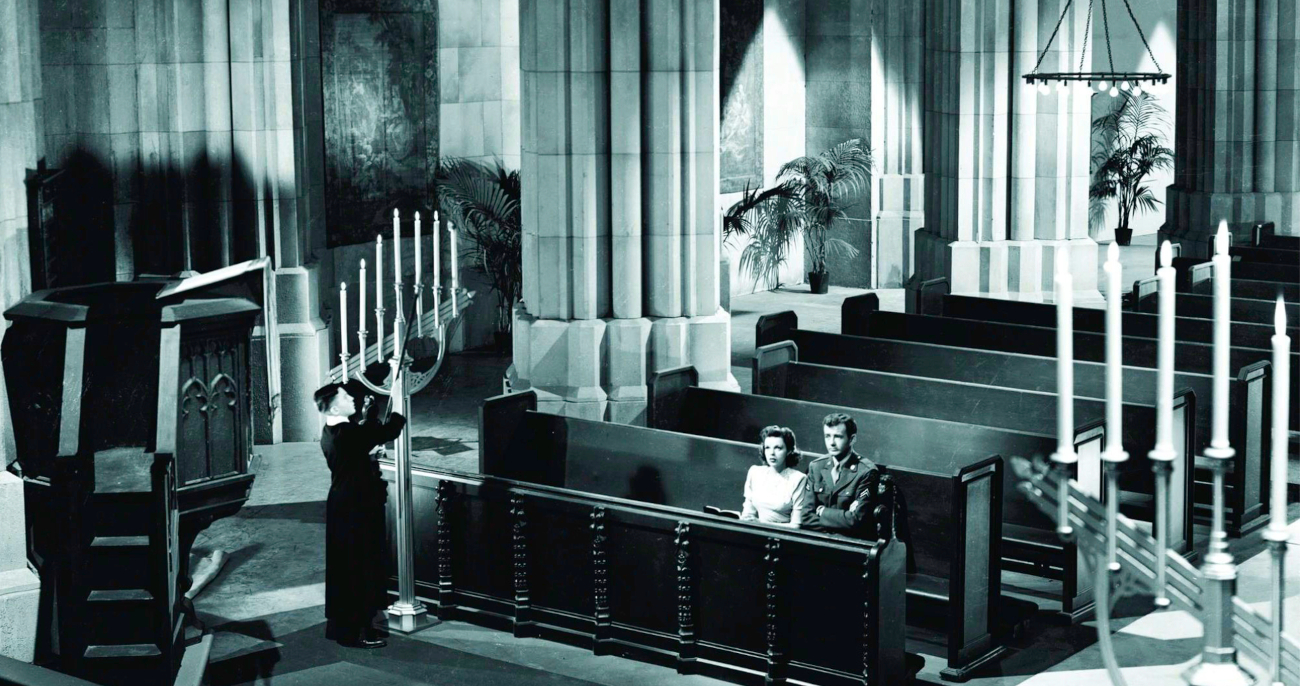 The Warner Archive Collection Blu-ray of The Clock is a beautiful encoding of this Judy Garland favorite. Improved B&W film stock helped the precision studio artisans put across some clever tricks, as when the camera pans to follow Garland and Walker from a stage set, to a position in front of a rear-projection of New York City. The excellent illusion likely fooled many audiences completely.

George Bassman’s musical score stands out but avoids overstating The Clock’s more emotional moments. James Agee had an opinion about this as well — he hated heavily-scored scenes of emotion. His review lectures MGM that Garland and Walker’s most intimate scenes with the choker close-ups, would have played better without a music overlay.

The presentation reproduces the extras given the 2007 DVD. The Pete Smith short Hollywood Scout is still in a miserable old telecine transfer, but Tex Avery’s hilarious The Screwy Truant looks great in remastered HD. This is the Screwy Squirrel cartoon that changes course halfway through to lampoon Little Red Riding Hood. A hungry wolf rushes through a doorway only to run into a solid brick wall. A sign reads, “Imagine That! No Door!”

One amusing touch is the menu text that assures us that a recording of a radio version of The Clock is ‘audio only.’ That’s one controversy narrowly averted. The original trailer is included as well. It billboards the fact that James Gleason’s wife is played by his real missus, Lucile, as well as the writing couple Paul and Pauline Gallico. Romance is all over this picture.

The cover art for The Clock is so attractive, it’s hard to believe it’s from an original studio poster. I bet that Minnelli stepped in to secure something better than the usual MGM eyesore.