The frights of Horror Hotel are back in an improved presentation in this 2018 Limited Edition. Set in New England but filmed in Old England, this creepy shocker is a favorite not just for the presence of Christopher Lee, but also the wonderfully mortiferous Patricia Jessel and the cadaverous Valentine Dyall. VCI has released an improved Blu-ray of The City of the Dead, hereby designated their Remastered 2018 Limited Edition. Having been too young to see Psycho first-run, a certain plot twist in this show provided my initial horror shock of the, “but they can’t do that!” variety. The City of the Dead has a distinctive look and distinctive performances… some of the English actors’ Yankee accents are ‘off’ just enough to sound more than a little odd.

This efficient and reasonably engaging witchcraft tale gets high marks on the horror matinee hit parade, conjuring up a few good scares. Christopher Lee tops a cast that does well with a by-the-numbers script, adding enthusiasm and conviction. Some Italian films around this time played games with the cast billing to appear to be made in England. This English production takes place in America to take advantage of the notion of historical witch burnings, etc. Most of what we see is predictable Satanistic coven activity. But atmosphere counts for a lot in Gothic horror, and City of the Dead is soaked in spooky fog and under-lit sets. 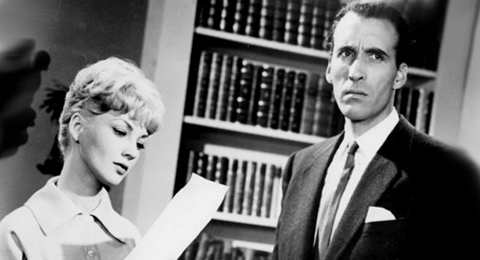 After a Black Sunday– like period witch burning scene, producers Max Rosenberg and Milton Subotsky begin their show in an academic setting, with a college professor who should never have been granted tenure. Eager to research witchcraft and impress her professor Alan Driscoll (Christopher Lee), pretty Nan Barlow (Venetia Stevenson) goes against the wishes of her brother Richard (Dennis Lotis) and boyfriend Bill Maitland (Tom Naylor). She uses her college vacation to drive North to the tiny New England town of Whitewood, where it is said that witches were burned almost 250 years before. There she meets Mrs. Newless (Patricia Jessel), the haughty owner of a small inn. She is warned by several locals including young Patricia Russell (Betta St. John) that devil worship may still be active in the dark and foggy hamlet.

From the moment we see Christopher Lee glaring angrily at a student that has dared scoff at his theories about witchcraft, we know we’re in one of those horror movies where certain things have to be taken for granted. Lee’s transparently villainous Professor Driscoll telegraphs his nasty motives with every gesture. None of his students are the least bit concerned by his brooding, sinister manner. When Venetia Stevenson’s Nan Barlow approaches Whitewood, she encounters villagers that behave like extras in an old Dracula movie. We never see the town in daylight; it instead exists in perpetual darkness. A misty fog hangs over everything without a hint of a breeze. Patricia Jessel’s insufferably haughty Mrs. Newless condescends to her guest, torments a mute servant and in general behaves so suspiciously, one wouldn’t turn one’s back on her, let alone stay in her hotel. Valentine Dyall’s spectral warlock Jethro Keane is on hand for additional generic menace. In a well directed bit of witchery, he vanishes mysteriously from Nan’s car. She takes it in stride, like every other uncanny thing she encounters. This woman would be an excellent traveling companion.

Actors Jessel and Dyall provide the chill factor that puts over the film’s sense of menace — both have great screen presence. Each wears a slightly sneering facial expression, just enough to be upsetting. Valentine Dyall’s commanding voice is a big asset as well. He narrates many English trailers, and serves as the booming voice of God in Stanley Donen’s Bedazzled. Neither of these creeps will give a simple answer to a simple question. Dyall’s Jethrow Keane talks as if he’s the Devil himself, in charge of bigger things than the claiming of a ripe virgin like dear innocent Nan.

Nan isn’t bothered by any of this strange behavior. This graduate student in anthropology is alone in a spooky town with a lot of weird locals. That must be a cue to strip to her ridiculous music-hall underwear to get ready for bed. Betta St. John’s Patricia is the local Marilyn Munster, oblivious to all the satanic activity around her. She runs her little bookstore without any sign that she ever gets a customer, as all the locals seem to be undead ghouls. Her father has (perhaps) been blinded by these town necromancers. Yet Patricia is puzzled when Nan’s brother Richard (Dennis Lotis) asks her if she has any ideas as to how his sister may have disappeared in Whitewood … on a known demonic holiday. Don’t all New England calendars come marked with the Dark One’s holidays?

All that really isn’t a problem, as The City of the Dead places us firmly in Happy Horror Movie Land, where we accept the stylized settings and even the somewhat artificial behaviors . . . it’s all part of the ritual. The heroes require seventy minutes to finally figure out what we knew going in. But we care about the likeable and attractive cast, and the show manage some impressively tense moments. Detractors can’t just pass it off as a Hammer wannabe. In terms of sophistication, Rosenberg and Subotsky’s picture can’t touch thrillers like Curse of the Demon or Burn, Witch, Burn, but it has a charm of its own and has become a favorite for many. The credited screenwriter is George Baxt, whose cheerfully lurid Circus of Horrors is a favorite that begs for a major reissue in Blu-ray.

The City of the Dead has curious similarities with Alfred Hitchcock’s Psycho. Nan Barlow checks into an inn and has much the same experience as the unlucky Marion Crane. Instead of a lover and a sister investigating her disappearance, it’s a brother and a boyfriend. The concept of one female victim entering a deadly trap with a second almost following in her footsteps is fairly generic. But since Subotsky’s film was shot earlier in 1959, he can’t have come home from Hitchcock’s movie raving, “We have to copy this, only with witches!”

City also utilizes a similar witch-burning prologue from Black Sunday, and from The Brides of Dracula the notion of the shadow of a cross utilized as a weapon against evil. All of these movies were released in the same year, so it would be unwise to claim that any of them is a copycat without a signed confession in hand. The City of the Dead is a respectable programmer made from various off-the-shelf genre elements. For the record, director John Moxey broaches the subject in his commentary, where he also compares his film’s plot to that of Psycho. In all fairness the stagey, fog-bound sets representing Whitewood look great, with interesting lighting and compositions. Desmond Dickinson’s B&W camera direction adds some welcome variations on established horror clichés. One nice touch is a shot of several couples dancing in Mrs. Newless’s inn. They simply spin around like tops, as did the haunted revelers way back in William Dieterle’s The Devil and Daniel Webster (1941). As for the sets covered in fog, I give them a solid ‘A.’ Roger Corman would use the same look on several of his Poe pictures — a bare stage with naked trees and a fog to cover the floor. The B&W image makes all the difference: in color and Panavision, interior sets of this kind never really convinced me.

Today’s fans of course like Christopher Lee most of all, although they need to know that he’s a supporting character here. The good news is that he gets a few dialogue scenes to play, when we’re used to seeing him in near-mute roles or dubbed with someone else’s voice. His professor Driscoll is an awfully uptight, twitchy guy. A blind man could see that he’s hiding something. Whenever someone mentions Whitewood or witchcraft, his overstated ‘little reactions’ look as if somebody hit him with a joy buzzer.

Venetia Stevenson is a favorite, sort of an angora sweater dream girl type grown into something a bit more substantial. Unlike hundreds of of horror bimbos, her Nan Barlow is a serious student, even if she at times seems more than a little dense. Knowing she’s in Witch Country, Nan nevertheless talks shop about the local superstitions. Her most amusing moment is when she tells Mrs. Newless, “Did you know that covens must first take a personal object from their victims?” Barely a moment later Nan follows that with, “Hey, you haven’t seen my gold locket, have you?” Mrs. Newless is another master of the ‘twitchy-subtle’ reaction. A fun editorial and writing exercise would be to superimpose subtitles over Chris Lee and Patricia Jessel, revealing what they’re really thinking.

Ms. Stevenson is possibly the only American actor in a movie that’s supposed to take place in New England (and she’s really half-English, being the daughter of director Robert Stevenson and actress Anna Lee). Only the old garage attendant played by James Dyrenforth tries for a genuine New England accent, and he gets his ‘Hickory Farms’ twang down just fine.

VCI’s Remastered 2018 Limited Edition Blu-ray of The City of the Dead is apparently taken from an entirely different source than their earlier release. It’s sharper, with a more stable image; more importantly the film speed/frame interpolation issues that made the earlier disc questionable have been cleared up. Chris Lee’s dialogue is still briskly paced, but it no longer has the ‘Nick at Nite’ feel of time compression. The framing is now a more spacious 1:66 and the contrast in most scenes is excellent. The fogbound, stagey interior/exteriors now have the right spooky feel; the show no longer looks like some odd kind of kinescope.

Although VCI’s revisit to its popular title has yielded a much better encoding, the extras have been pared down quite a bit from the earlier Blu-ray. The Christopher Lee items have been retained, his full commentary and the 2001 on-camera interview. Also present is a trailer. Dropped are an interview and commentary with director John Moxey, and the interview with actress Venetia Stevenson. Gone as well is the mushy standard-def copy of the shorter American cut Horror Hotel previously included for comparison purposes. Finally, a third commentary by Bruce G. Hallenbeck, has also been deleted from this Limited Edition.