An exercise in dizzy disorientation, this Cornell Woolrich crazy-house noir pulls the rug out from under the audience at least three times. You want delirium, you got it — the secret words for today are “Obsessive” and “Perverse.” Innocent Robert Cummings is no match for sicko psychos Peter Lorre and Steve Cochran. 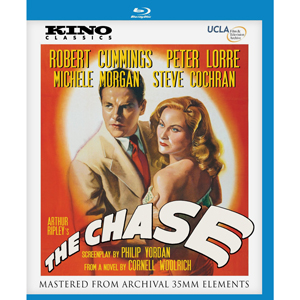 As Guy Maddin says on his (recommended) commentary, the public domain copies of this show were so bad that in some scenes one couldn’t see what happened. That’s quite true —  I’ve even read synopses that misread major events. Long absent in decent copies, the 1946 Arthur Ripley The Chase is now in terrific shape from Kino, ready for noir fans to watch, enjoy, and maybe scratch their heads at, in puzzlement. I saw it last year at one of the Noir City screenings, and I have to say that a couple of its plot turns didn’t work for me. The sensation was as if an amusement park ride had suddenly flipped over and dumped me on the sidewalk. The third and fourth times through, I’m still convinced that the twisted plot throws this thing all out of whack. Yet if you like creepy mysteries and doomed amour fou romances, The Chase has all the right ingredients. 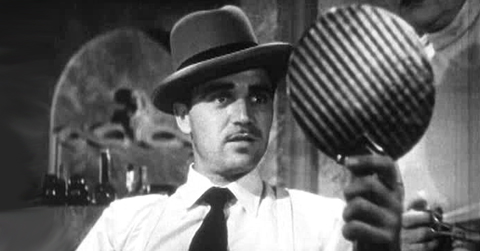 Seymour Nebenzal produced several German classics including the original Fritz Lang “M”.  Like so many others, he fled the Nazis and reestablished himself in Hollywood. The success of Hitler’s Madman directed by Douglas Sirk improved Nebenzal’s fortune; he remade some of his earlier productions, like the Joseph Losey “M” and the Maria Montez  Siren of Atlantis, which I’m told recycles footage from his old Pabst film L’Atlantide with Brigitte Helm.  1946’s The Chase is core Cornell Woolrich noir. It has a fairly good part for Peter Lorre and gives Steve Cochran an excellent launch as a sadistic gangster. And Michèle Morgan, a French actress who never found her footing in Hollywood, is nicely cast as a mysterious leading lady / damsel in distress.

The movie’s characterizations grab us immediately, even if screening audiences now feel the need to laugh at Robert Cummings. He bears an undeserved reputation as a bad actor, thanks to some over-the-top dialogue in Kings Row. When we first meet Chuck Scott (Cummings), he’s staring through a diner window in downtown Miami at a breakfast he can’t afford, like Joe Buck in Midnight Cowboy. An ex-Navy man on the bum, Chuck becomes a chauffeur for Eddie Roman (Steve Cochran) a wealthy operator with an ostentatious house full of marble statues. Roman’s a narcissist and a sadist; he punches out a young manicurist and plays threatening word games with his lady barber, much as does Joe Pesci in Goodfellas. 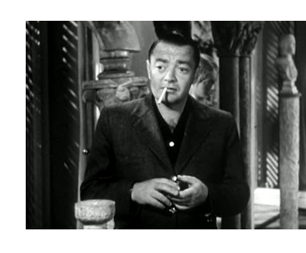 Roman’s creepy assistant Gino (Peter Lorre) sulks and loiters around the mansion until it’s time to help Eddie intimidate a businessman that they intend to cheat, or murder. Chuck falls in love with Roman’s caged bird of a wife, Lorna (Michèle Morgan). She’s always dressed as if she belongs in a fantasy dream sequence. Chuck watches as Lorna stands by the stormy surf to contemplate an escape to freedom in Cuba.

So far, little in the movie seems ‘real,’ but then the storyline soon goes completely haywire. Chuck and Lorna make their break for Havana, knowing they can easily be traced. Everyone there seems to be a long-distance operative for Eddie Roman, carrying out his romantic revenge. The story then flip-flops in a way that would be criminal to divulge. Let it just be said that the tale embraces classic Woolrich thematic material: dream sequences, mental illness, amnesia.

Even the dream sequence is strange — in retrospect we realize that Chuck must be able to see the future: his subjective dream invents people and places that later turn out to be real. Chuck also dreams scenes in which he’s not present, which is okay — who’s to say how explicitly subjective a dream must be?  Not even Dorothy in The Wizard of Oz dreams exclusively about herself. But here it feels as if the narrative had been thrown in to a blender. It wouldn’t take much effort to re-cut the movie reversing Act 2 and Act 3, with Chuck’s seeing the psychiatrist coming first, and then the trip to Cuba. If you see the movie you’ll know what I mean. 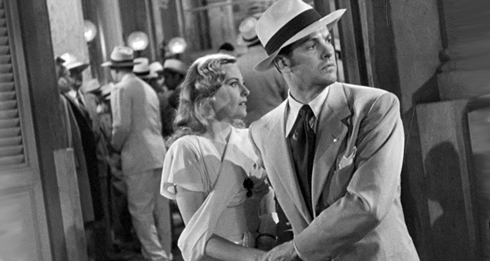 Another dislocating element: Lorna’s mid-film surprise is surprising enough, but she’s also deprived of anything like a ‘special’ introduction. When Chuck meets Eddie and Gino no mention is made of Lorna. She is later simply ‘discovered’ sitting on a sofa. There’s no scene where Chuck first sizes her up, or her eyes stray in his direction. But a couple of minutes later, they’re madly in love and contemplating a mad dash for freedom. That’s natural enough in films noir, but the dreamlike feeling in this movie begins way before the dizzying Woolrich dislocations occur.

Why do I question the plotting in this picture? It was independently made, so no studio head was around to insist that it be hammered into a conventional shape. Guy Maddin’s commentary references many differences in the original Woolrich story, which, for instance, begins in Havana. Maddin says that Yordan’s script invents a plot device that’s just plain nuts. Eddie Roman’s car has a second set of pedals in the back seat, and a second speedometer. Whenever he wants to, Eddie can take control of braking and acceleration, leaving poor chauffeur Chuck to handle the steering as the madman in the back seat takes the car up to 100 mph. Even Peter Lorre’s Gino turns pale. Forget the engineering miracle that would be needed to make this work; it’s only there to give Roman an opportunity to behave like a maniac. Chuck takes the crazy behavior in stride, and earns Roman’s approval. 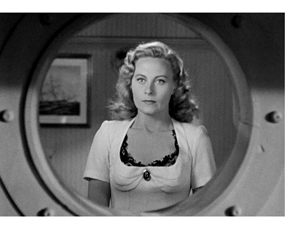 This back seat driver gag plays as ‘unreal,’ but not strictly dreamlike. It functions as if it were conceived to substitute for even more outrageous activity. As Steve Cochran always looks like a raving sex maniac, we can only wonder what the hell is really going on.

Ms. Morgan’s Lorna maintains a dreamlike poise, like one of her husband’s statues. One scene on board a boat is partially framed through a porthole, creating an erotic vision that aligns with Robin Wood’s critical interpretation of Alfred Hitchcock’s Marnie. Cummings plays the luckless noir loser-pawn, who looks like a goner for sure. Peter Lorre is balefully effective, even without much to do. But Steve Cochran runs with his (minor) star-making part. When he discovers Lorna’s infidelity, Eddie Roman looks profoundly hurt. Is this all just a private misunderstanding between a sensitive sadist and his sex prisoner? When the psychiatrist shows up a little later on, we’re convinced that most everyone in the cast could use his services.

Alexis Minotis, Nina Koshetz and Yolanda Lacca have intriguing roles to play in the confused Havana sequence. According to Guy Maddin, in the original Cornell Woolrich original story Ms. Koshetz’s character was male, and also an opium dealer; Ms. Lacca’s character ended up a romantic partner with our confused hero. The Chase is beautifully directed for maximum visual appeal. Franz Planer’s rich images enhance (or improve?) the work of director Arthur Ripley. Commentator Maddin wrongly calls the movie cheap, more than once. The Chase is a fairly impressive mid-sized production. A real Hollywood cheapie of this time – say perhaps, Decoy, lacks large sets and numerous extras.  I think the starring cast would have impressed industry pros back in 1946, too. 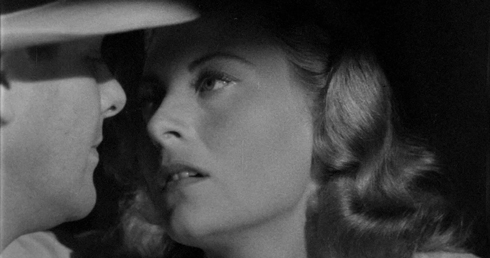 The Kino Classics Blu-ray of The Chase is a very good restoration, or more accurately, a film rescue from the brink of doom. There’s some mottling here and there and one or two slightly soft shots, but overall the picture is excellent, with solid audio. The image hasn’t been over-scrubbed and retains a filmic surface. Kino reports that it’s the work of the UCLA Film & Television Archive, as was Andre De Toth’s Pitfall from last year. The Film Foundation was involved as well.

Kino’s producer (Bret Wood?) has rounded up two different radio performances of the Woolrich short story, enabling listeners to compare versions. Also included are spiffy trailers for Kino’s releases of A Bullet for Joey, He Ran All the Way and Witness to Murder.

I’ve already noted the informative Guy Maddin feature commentary. Filmmaker Maddin is really taken with the picture, and may have asked to contribute to the disc. Most of his observations are comparisons with the short story source, although his thoughts about the characters and performers are interesting as well. Neither too technical nor too fussy, the commentary has some surprises, as when Maddin identifies the actress playing a Cuban curio shop owner as a famous opera star. He’s fascinated by the bizarre fate of actor Steve Cochran, who perished trying to make the ‘I Sailed to Paradise with an All-Girl Crew’ fantasy into a reality. When Maddin seemingly can’t distinguish between real shots of a speeding train and obvious miniatures, we’re not perturbed — his contribution goes beyond simple facts. And someone please tell him that his favorite Peter Lorre movie The Face Behind the Mask has indeed shown in excellent condition on TCM… although why it hasn’t been released on disc in some form is a mystery.

The Chase is not a movie I was expecting to see surface anytime soon. It’s amazing — every few months, another previously unavailable key noir rises from the bog to shine on Blu-ray: The Strange Affair of Uncle Harry, Ride the Pink Horse, Cry Danger, The Prowler, The Captive City, Force of Evil, Caught, World for Ransom, In a Lonely Place. Coming soon are Woman on the Run, 99 River Street and Too Late for Tears. What’s still not on disc at all? We’re always ready to see Stuart Heisler’s Among the Living, Don Siegel’s Baby Face Nelson, W. Lee Wilder’s The Pretender, Harry Essex’s I, the Jury (in 3-D), and Robert Siodmak’s Christmas Holiday. And if The Film Noir Foundation can swing it, maybe we’ll see disc releases of those ‘Argentine noirs’ they’ve been showing at their film festivals.