It’s hard to think of a musical that would benefit more from a Blu-ray boost than Ken Russell’s kaleidoscopic all dancing, all singing send-up of theatrical clichés on the music hall stage, circa 1925. We’re just happy that the adorable Twiggy got to be put in a film like this, to be enjoyed forever. The Russell crowd is all aboard, led by Glenda Jackson and Murray Melvin. Gosh! 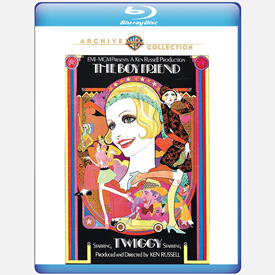 Some directors have a reputation for iffy, edgy films not expected to find favor with all audiences … but some come through with the occasional crowd pleaser that wins over everybody. This one is a real winner — especially when released in this new Blu-ray presentation.

The devoted following of the highly creative film director Ken Russell loves everything he ever filmed, from a series of 1960s TV shows about great artists to his intriguing drama Women in Love to his series of phantasmagorical musical biographies. Russell built a definite Bad Boy reputation as the director of the X-Rated The Devils (1971), an excessively violent, graphic and blasphemous period epic.

From the same year, Russell’s The Boy Friend is a spirited, G-rated musical filmed immediately after The Devils. His star is Twiggy, the famous ’60s teen model, and she’s terrific in her screen debut. Twiggy’s slight build, huge, sad eyes and winning smile are perfect. She also sings and dances quite well.

Sandy Wilson’s original 1954 stage musical lampooned a class of peppy, romance-oriented and totally shallow variety entertainments from 1920s England. Julie Andrews made her American stage debut when this popular show came to Broadway. Perhaps inspired by Singin’ in the Rain, the play is a featherweight trifle about a number of young schoolgirls at the ‘Villa Caprice’ preparing for an important party. Millionaire’s daughter Polly Brown (Twiggy) has no beau of her own and hides her posh background when the delivery boy Tony (Christopher Gable) takes an interest in her. Polly’s doubts vanish when Tony shows up as expected; the other girls all receive proposals of marriage but determine to wait until midnight to give their answers.

Viewers unfamiliar with the style of the ’20s English musicals spoofed in The Boy Friend might remember a snippet from one presented in David Lean’s A Passage to India. The iconic image is a quartet of gaily-dressed ingenues carrying parasols, courted by young swains in ice cream coats and straw skimmer hats. In Lean’s movie, the serious Judy Davis can’t stand the inane amateur production and walks out.

Backed by the considerable resources of EMI-MGM, Ken Russell’s frames the play The Boy Friend as a show being offered by a run-down theatrical company fraught with all the shenanigans expected in a backstage comedy. Frantic, nervous understudy Polly (Twiggy) fills in when the show’s star (Glenda Jackson, in a cute cameo) hurts her leg. Russell even goes so far as to directly quote the deathless “Come back a star!” and the “Go out there and make me hate you!” cliché dialogue from the original Busby Berkeley backstage extravaganza 42nd Street. The staging and performances of the musical numbers remain fairly faithful to what might be seen on a stage in 1925, enhanced with charming and lovely designs (Tony Walton) and terrific costumes (Shirley Russell).

But Russell doesn’t stop there. Several of the musical numbers ‘open up’ into surprising fantasy sequences, each following a different visual theme. One romp in a park is an orgy by characters from Greek mythology; it doesn’t sound too promising but is as clever and pretty as the corresponding animated scene in Disney’s Fantasia. “A Room In Bloomsbury” expands to allow Polly and her beau Tony (Christopher Gable of The Music Lovers & Women in Love) to play house in an outsized dollhouse set. They then leave the stage even farther behind, to romp through a forest of mushrooms in a fanciful land of trolls and elves.

Some of the fantasies reproduce iconic images from ’30s musical classics. We see the showgirls riding the wings of a giant biplane, as in Flying Down to Rio. Many recreate Busby Berkeley’s gloriously outrageous musical set pieces choreographed for the camera in his major Depression-era musicals. We get Berkeley’s complex silhouette tricks and his aerial views of dozens of dancers creating kaleidoscopic geometric patterns. Shimmering in unusual colors, female bodies form a screen-full of playing cards. A railroad car splits in two as in “Shuffle off to Buffalo”. The camera plows through dozens of splayed legs to reveal the romantic leads smiling at the camera.

In 1971 the camp rediscovery of Busby Berkeley was just beginning to filter down from the New York smart set to college campuses, so most audiences were taken by surprise. Russell also doesn’t cheat, in that he creates his graphic illusions with the same organic methods used by Berkeley. These musical numbers are more than copycat exercises — design-wise, some are refinements on Berkeley’s originals. Russell’s syncopated chorines are certainly better dancers than Berkeley’s squads of exhausted Hollywood showgirls. 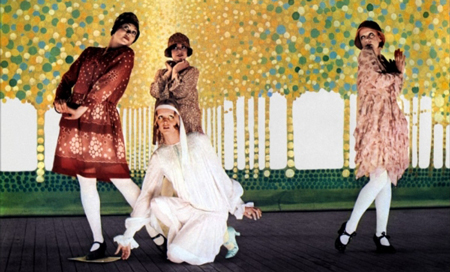 It also needs to be said that Russell, his designers and choreographers come up with scores of arresting dance and performance inspirations on their own. Ace cameraman David Watkin is in charge of the splendid lighting cinematography. The creativity on display in The Boy Friend is dazzling. Unlike the Rodgers & Hammerstein operetta + ballet musicals that had dominated screens for fifteen years The Boy Friend entertains through pure performing oomph. Tommy Tune’s long-legged specialty dancer is a perfect match for the kind of tap-dancing wonders that emerged from New York’s vaudeville circuit. Those four key girlfriends are terrific dancers and comediennes.

While Polly desperately tries to attract Tony’s attention (and avoid laying an egg), most of the other performers are busy upstaging and sabotaging each other in an attempt to impress Mr. De Thrill (Vladek Sheybal), a big time movie director watching the sparsely attended matinee performance. One of the male performers is hiding from his wife, who shows up with a crying baby in tow. An older veteran rails about the indignities of working in the tiny theater, while his own spouse tries to cheer him up. Poor Polly is convinced that Tony doesn’t really like her, but the backstage romance and the one in the play eventually dovetail into the inevitable happy ending.

The Boy Friend was chopped up for distribution, with the original U.S. release coming out in 70mm but suffering almost twenty minutes of cuts. We’re told that Russell’s full-length 136-137 minute version wasn’t shown in the states until the late 1980s. The long cut does drag somewhat in the last act. We begin to overdose on fantasy sequences, especially when Russell repeats his overhead pinwheel effect, or throws in a second solo number with Twiggy singing another Nacio Herb Brown MGM tune from the late 1920s. Just the same, the overall good impression is not diminished. Audience approval for this show is a given.

We come away from The Boy Friend enchanted by Twiggy and angry that the movie industry in 1971 didn’t find more special opportunities for her. Twiggy’s filmography is not a lean one but it contains little if anything as impressive as this first film. Most younger viewers probably know her from her charming cameo in The Blues Brothers, and must look to their elders to learn how big she was just ten years earlier. Plenty of visually oriented high-concept films, musical and otherwise, have failed for lack of a strong central star performance, and Twiggy makes The Boy Friend into a classic. 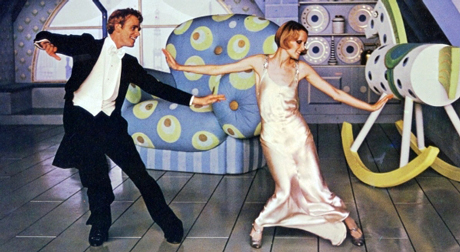 The Warner Archive Collection Blu-ray of The Boy Friend duplicates the earlier DVD-R but with a dazzling HD image that heightens the film’s colors and designs. The contrast between ‘reality’ and the stage productions is more acute, and we spend time admiring the details in the old-fashioned greasepaint makeup and fanciful costumes. If you saw this picture a while back pan-scanned on TV, you haven’t seen it. The wide Panavision aspect ratio displays the film’s full horizontal sweep, perfectly framing cameraman David Watkins’ carefully composed images. The colors are exceptionally good, especially the subtle use of greens and yellows. The “traditional” stage scenes give a good impression of footlights shining up on all the exaggerated smiles of the heavily made-up comediennes. The show also carries subtitles, which the old DVD-R disc did not. .

The full 136-minute cut includes entire musical numbers and plenty of stage business dropped from the original American cut. Thanks to Bruce Kimmel for writing to me to detail the differences:

“Hey Glenn — I enjoyed your treatise on the film very much. I saw it about ten times during its brief run at the Picwood back in the day and loved it; it never occurred to me it might have been longer, so seeing the full version the first time I wasn’t quite sure what to make of it because I’d loved the short version so much. Eventually I got used to it, but the cuts were done very well and some of what they cut is, well, Russell-excessive. Just a correction. All the footage in ‘Room in Bloomsbury’ was always in the short cut. The big excisions were that long, endless Greek sequence, almost the entirety of  ‘It’s Never Too Late to Fall in Love’ — both Twiggy solos were in the short cut — and several other big chunks in numbers but not ‘Bloomsbury’ or ‘I Could Be Happy’ or the finale. They tended to go for huge chunks.”

The show also has an Intermission card and musical accompaniment dropped for the initial U.S. run.

The sole extra is a 1971 behind the scenes featurette showing Russell at work filming the dancers on stage. It’s a real treat. We readily understand why Russell fans once explained that The Boy Friend needs to be seen on a big screen. On a large home monitor, it’s a knockout.