True-Crime Terror! Richard Fleischer and Edward Anhalt’s riveting serial killer makes extensive use of split- and multi-screen imagery. One of the most infamous murder sprees on record fudges some facts but still impresses as a novel approach. 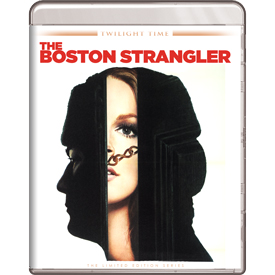 Twelve years ago I wasn’t all that impressed with The Boston Strangler. I thought it too slick and felt that its noted multi-screen sequences were a gimmick. I appreciate it more now — except for the name cast, it’s actually quite naturalistic. Edward Anhalt’s excellent screenplay takes on the hot subject matter with good taste even as it suggests terrible sex crimes. Director Richard Fleischer’s visual approach can’t be dismissed as an imitation of European trends; the split-screens and surreal sequences reach beyond the verbal descriptions of madness in Fleischer’s Compulsion, another true-life murder story. It makes good use of complex narrative devices.

The first half of The Boston Strangler plays its true-life horror angles to the hilt. As the warped multiple personality Albert DeSalvo, Tony Curtis suppresses his all-smiles pretty boy image. Back in 1963, an unknown serial killer holds Boston in terror — he’s killing women of all ages, and they all seem to have let him into their homes. The lack of clues and witnesses confounds special investigator John S. Bottomley (Henry Fonda), who scours the underside of the city and even enlists the help of a professional psychic. His hardworking detectives bring in every pervert on the books but nothing pans out. It turns out that their killer citizen conforms to none of their pet theories … and the score is up to eleven women dead.

The Boston Strangler sees 20th Fox retracing its steps back to the postwar years, when they pioneered a style of filming crime thrillers on real locations, sometimes using non-actors. William Friedkin’s The French Connection went full bore with the style three years later. The ex- television documentarian Friedkin said to hell with tripods and pretty pictures and shot a lot of his police thriller as if it were being captured by a news camera. The Boston Strangler sticks to the facts. Its scary story is kept down at the level of the poor victims, little old ladies and single nurses. The women aren’t made to appear cute or attractive, and seem all the more vulnerable for it. Seeing these believably frail and frightened women was a shock in 1968. When they movies showed them at all, women over sixty were usually portrayed as cute ‘little old ladies.’

There is a big difference between this film and Fox’s The Detective of the same year, and it isn’t just the lack of a jazzy music score. Familiar actors play the police, led by a bona fide star, Henry Fonda. But Fonda looks older and far more weary than his ruthless gunslinger in Once Upon a Time in the West. He doesn’t smile. He’s more subdued than his police commissioner in the same year’s Madigan. The main detectives on the case are given conflicting personalities — George Kennedy has empathy for the victims, Murray Hamilton has a smart tongue, and Mike Kellin smokes a pipe like an intellectual. None is given an easy dramatic pattern to follow, and the show really isn’t about the police. It instead focuses on the horrific crimes, and then the horrific man responsible for them. 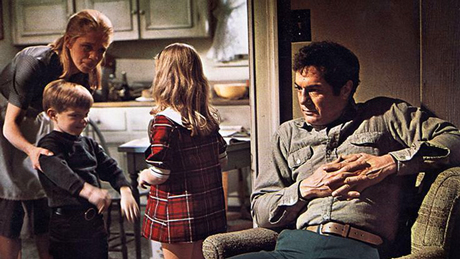 Following on the grim reality of the previous year’s In Cold Blood, the edgy content of The Boston Strangler was jarring for ordinary audiences of 1968. Nine years after James Stewart was finally allowed to say ‘panties’ in the courtroom drama Anatomy of a Murder, the cops are throwing around words like semen and faggot to show us this is how real policemen talk. It’s natural enough but the screenplay pulls back from giving the cops more realistic reactions to the unhappy homosexuals and maladjusted kooks they shake down to find their man — none feel a moral duty to punish ‘degenerates.’ Henry Fonda’s special investigator personally saunters into a gay bar to interview a homosexual antiques dealer denounced by a pair of hostile lesbians. The antique dealer turns out to be Hurd Hatfield, Dorian Gray himself. Not exactly creative casting. Here’s the official stance on deviant behavior circa 1968: they’re sick, sick, sick … but the police are an understanding bunch of guys when dealing with these people on a daily basis.

What seemed liberal in 1968 really isn’t. The public got its first big movie dose of LGBT realities through police dramas dealing with vice and psychopathic killing, and a favorite theme of ’60s thrillers was to make a generic killer into a ‘sex deviate.’ The basic lesson learned is that being gay and violent crime are related.

The best performance in the movie is that of actor William Hickey (of Prizzi’s Honor). Hickey’s pitiful sicko Eugene T. O’Rourke is a mournful suspect who so despises himself that he sleeps on raw bedsprings and ‘washes himself in the toilet.’ Kennedy and Hamilton take that as surefire proof of guilt. Hickey’s horrified reaction when he realizes that that they think he’s hurt someone is extremely well done.

The Boston Strangler’s split screen sequences were exciting and different in 1968. Conventional film montages work with cuts, developing rhythms that can bridge content and compress time. These split screens put multiple images side by side on the screen, creating parallel actions that make us choose what to watch. Or we can just stare at the screen and soak it all up as a pattern of boxes. Most of us pay as much attention to the shifting, moving little mortised boxes as we do to their content. The obvious special use of a split screen is to show us an action from two views at once, such as the simultaneous recording of action on both sides of a door during a murder (Image just above). Elsewhere the split-screen treatments substitute for conventional montages. The Boston Strangler uses the device with restraint for the police investigations and press conferences.

The trend lasted several years. Norman Jewison’s split screens in The Thomas Crown Affair (1967) were just for decoration, to show off Steve McQueen’s glitzy lifestyle. Every so often, the screen would explode into a kaleidoscope of moving images. Frankenheimer’s multi-screens in Grand Prix (1966) added variety to what might otherwise be interchangeable car races. [ Interestingly, scenes in earlier Frankenheimer films showing massed TV monitors could be called a use of ‘organic’ multi-screening. ] Woodstock (1970) certainly used its split screens creatively, but was still a desperation measure used to spread unimpressive 16mm images over a broad 70mm canvas. Brian De Palma would later make frequent use of split screens to add interest to ordinary suspense scenes. Former editor Robert Wise made excellent use of the ‘gimmick’ for carefully selected sequences of The Andromeda Strain. 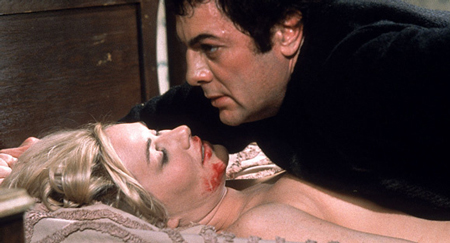 To its credit The Boston Strangler dares to use a boldly experimental narrative structure. The crime thriller narrative grinds to a dramatic halt with the capture of Albert DeSalvo, played in perfect pitch by Tony Curtis. A psychiatrist claims that there are two warring personalities withing DeSalvo. Split personalities on film had been mined-out in endless TV rehashes of The Three Faces of Eve, but Curtis’s DeSalvo is fascinating, even in the obligatory self-discovery scene in which he becomes aware of his evil true nature by acting out a memory scenario. Along with Liv Ullman lookalike Carolyn Conwell as DeSalvo’s pathetic wife, surviving victim Sally Kellerman plays support in a final act that’s confined to a couple of rooms. This extended psychiatric investigation has no real forward motion. We’re left with a proper respect for the gravity of the crime even as the film freezes into stasis, in a featureless ‘room of the mind’ reflecting DeSalvo’s isolation. It’s comparable to the cosmic prison / hotel room in the same year’s 2001: A Space Odyssey.

Seldom mentioned but quite good is a DeSalvo memory-scene, in which he forces himself to penetrate the wall of denial about what happened between him and one of his victims, an old lady. Mixing B&W and color footage with travelling mattes, Fleisher and Edward Anhalt show Albert DeSalvo’s psychological self-defenses breaking down, as he himself feels alibi giving way to the sordid facts of a murder. Technically it’s like a Jean Cocteau montage, where DeSalvo steps from the false reality back into what really happened. He even walks ‘through’ a glass shop window, like the 4D Man. Late- ’60s Hollywood often looked stupid when imitating European visual trends, but The Boston Strangler uses its visual tricks with integrity.

The Boston Strangler gives us a full roster of colorful supporting characters. Good performances abound. Jeff Corey is an attorney, William Marshall a deep-voiced D.A. and John Cameron Swayze lends a familiar voice to radio announcements. George Voskovec has a bright scene as a fussy psychic who embarrasses a young detective (James Brolin) by divining that the man came from making love to his wife on the kitchen table. Familiar comedy actor George Furth plays an unlikely Don Juan, an ordinary, unimpressive guy who somehow manages to seduce a dozen women a week. The detectives are suitably impressed.

The Twilight Time Blu-ray of The Boston Strangler is a strong entertainment package, with excellent extras. The sharp widescreen image spreads all the split-screens across the screen — the movie died when pan-scanned on television. Colors are excellent. Lionel Newman’s spare music score is on an isolated track, but with the sound effects. The show begins in silence, with plain text cards coming up, a ploy from In Cold Blood that sobered up 1968 audiences right away. 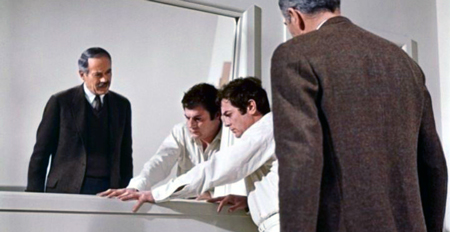 Older extras from Fox are included. A short Movietone newsreel confirms the panic that befell Boston during the reign of the Strangler — older women are seen on the street carrying knives as insurance, and an authentic man from the gas company says he’s having a heck of a time making house calls. An AMC Backstory segment on the making of the movie spins a cleaned-up version of the crime and its path to the screen.

From 2013 come two Fiction Factory interview based featurettes, from Robert Fischer. Split-Screen Personality gives us director William Friedkin talking at length about the movie. Real Killer, Fake Nose interviews Richard Fleischer’s son, cameraman Richard Kline and actress Sally Kellerman, all of whom have interesting things to say. David Del Valle and Steve Peros contribute an audio commentary, and the package rounds out with a pair of trailers. Julie Kirgo’s expected incisive liner notes offer some real surprises — the movie fudges many of the basic facts of the case, and reportedly fictionalizes Albert DeSalvo’s split personality.