It’s the granddaddy of British cop dramas of the modern era. The most popular English picture of 1950 introduced PC George Dixon, a warm-hearted constable who would become a staple on BBC TV for 21 years. T.E.B. Clarke’s screenplay of a murder manhunt is stocked with actors American fans know well — Dirk Bogarde, Bernard Lee — and some we should know better — Jack Warner, Robert Flemyng, Dora Bryan. The show was made by the top craftsmen of Ealing Studios, and its fast pace and Brit sensibility will definitely impress. And remember — the Bobbies on the beat don’t even carry guns. 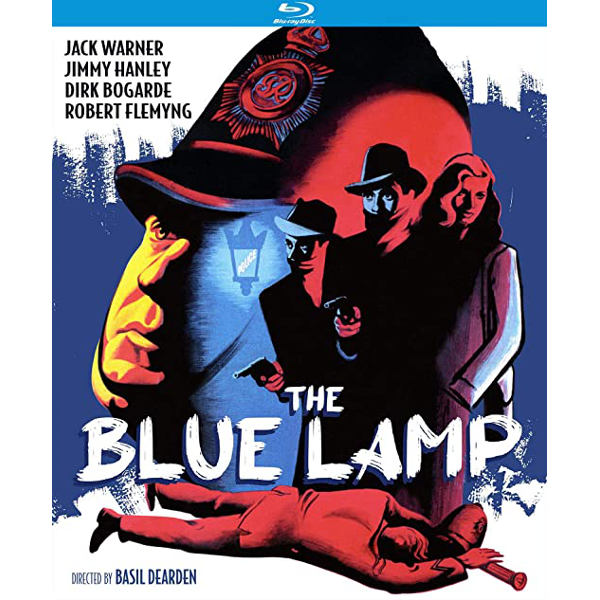 About twenty years ago I read a library book by Raymond Durgnat on British Film and realized there was a big hole in my film education. Each page listed at least four unfamiliar titles. The first thought that went through my head was, ‘I haven’t even heard of any of these.’

The popular 1950 police drama The Blue Lamp was such a mainstay in England that my UK readers might not understand our interest. In the last couple of years the Studiocanal-Kino Lorber hookup has given us terrific new and uncut encodings of movies that just weren’t shown much on U.S. television, like the superb Pool of London and Seven Days to Noon. Is it too much to hope for the even more obscure 1948 thriller Counterblast?

The Blue Lamp is a warm pro-police thriller that emphasizes the everyday doings at a London station house, using elements that will be familiar to any lover of cop shows: the wise veteran, the green recruit, the competent detectives and supervisors. The Blue Lamp of the title refers to a light outside police stations.  There are corny aspects … even one of the writers thinks that a scene about a precinct-house chorus was imposed on the picture. The fun for us Yanks is trying to understand the specific London context of law and order. Peacekeeping in postwar England presented new challenges.  Organized criminals of the 1930s — they say — accepted a code that in general curbed violence, especially toward policemen. But a new crop of younger hoodlums and punks followed no predictable rules. I’m presuming that this film’s ode to the city’s law men was partly in response to a wave of pictures that critics complained were glamorizing criminality.

The respected and loved Police Constable George Dixon (Jack Warner) is getting on. He’s considering retirement, an idea welcomed by his adoring wife Emily (Gladys Henson). Dixon is helping to break in young PC Andy Mitchell (Jimmy Hanley), who needs help learning some of the rules of walking a beat in a poorer section of town. A pair of young toughs cause trouble: when Tom Riley and Spud (Dirk Bogarde & Patric Doonan) steal a jeweler’s keys and rob his store, upper-level detectives Sgt. Roberts and Inspector Cherry (Robert Flemyng & Bernard Lee) are soon on the job. Tom’s girlfriend Diana Lewis (Peggy Evans) has run away from home because her alcoholic mother expects her to take care of the younger children; Tom soon has Diana helping arrange a robbery at a theater, on a night when the noted Tessie O’Shea will perform. The crooks are clever but Tom panics and shoots a constable. The organized police response closes in on Tom and Spud, to put things back in order.

Human interest and curiosity about policing in 1950 are the strong elements in this exciting story. At the time it was considered to be a semi-documentary, filmed mostly on real streets. Because it seems as if every inch of the London on view has since been radically redeveloped, The Blue Lamp is a time machine to a different age. Just seeing the interiors of businesses and the popular music hall feels like a trip to a lost world. The constables know their turf.  The young punks think they’re anonymous but the cops can spot them in a second, as can the more established crooks. When Tom and Diana argue in the street, even young PC Andy can tell they’re ‘not right.’ Sure enough, Diana reveals immediately that she’s a runaway, and has to take a trip to the station house for an interview.

The action scenes are crisp even if the car chases are visibly under-cranked to make things seem to go faster. One car pursuit threatens a crosswalk filled with schoolchildren, an encounter seemingly revisited for the 1966 heist film Robbery. The chases reportedly make London ‘map sense’ as well. A foot chase exits one district, crosses a broad industrial area and ends at a large dog racing stadium. Perhaps Londoners would feel right at home. Director Basil Dearden doesn’t shy away from showing dilapidated housing and grimy slum kids. In one memorable scene a policeman retrieves the murder weapon, a pistol, from a little girl who has found it on a filthy mud flat. 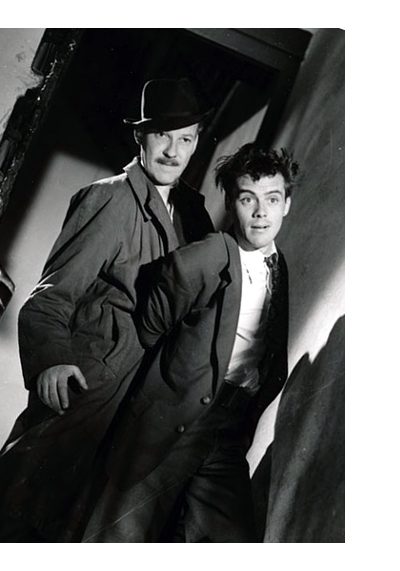 How idealized are the station house scenes?  The camaraderie among the street-beat constables and the overall professionalism of the lawmen is fairly inspiring: wouldn’t it be nice to have a social system where the police are a closer part of the community?  Our heroes do encounter people who hate cops, even children. But the constables don’t seem to hold grudges. The jeweler fell into the thieves’ trap because it was baited with a woman, and the detectives don’t mind keeping that part of the crime out of the news.

I imagine that Brits might feel the same way we do about some older crime pictures: nostalgia for a time before the complications of drugs, racial tensions, immigrant issues, etc.. The same escapist yearning applies to westerns, where audiences can pretend for two hours that there’s only one problem to be solved. Basil Dearden’s directing career would include several films that probed more complicated social issues. Especially singled out for merit were Pool of London and Sapphire (racial tensions) and Victim (the blackmailing of homosexuals).

The conclusion finds a way to please everyone. When the murderer tries to lose himself in the crowd at a dog-racing track, the script confects to have all of English society cooperate to bring him down — the police, the track proprietors, the track’s sizable corps of bookies, gamblers and low-lifes. The bookies even use their semaphore-like signal system to relay the information.  This vision of the underworld seems borrowed from Kurt Weill and Fritz Lang — neither legitimate society nor the underworld has any use for a mad dog punk.

At least half the fun of The Blue Lamp is enjoying its wide range of popular English film actors. Jack Warner’s constable George Dixon is beloved by all; the actor reprised the character for the long-running TV series Dixon of Dock Green, which began a full five years later. Genre fans here know Warner mainly from The Quatermass Xperiment and perhaps Carve Her Name with Pride. Future star Dirk Bogarde was certainly established by this time. I don’t know what role put him over the top, unless it was his series of ‘Doctor Sparrow’ movies. Jimmy Hanley isn’t known here in the states at all. He worked in comedies and musicals, and I’ve previously seen him only in an unrewarding role in the obscure 1956 science fiction film Satellite in the Sky. Hanley was 32 at the time, perhaps a little old for a rookie constable. 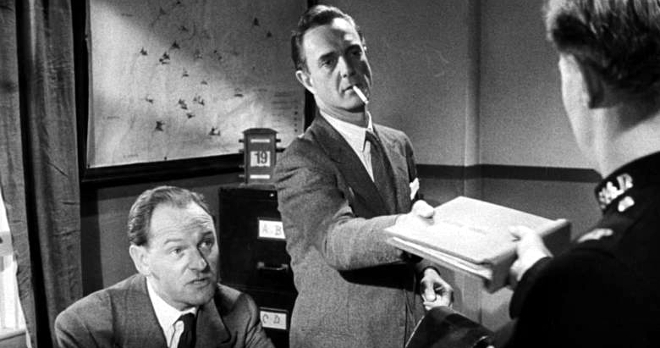 This is the youngest I’ve seen favorite Robert Flemyng ( Middle ↑ ), who would surely blanch at the notion that he’d be remembered for The Horrible Dr. Hichcock. Flemyng’s drawn face is immediately identifiable. Bernard Lee ( Left ↑ )   is of course “M” from the first dozen or so James Bond films; we were surprised to see him looking normal-sized, after his tall soldier in The Third Man. (Was Trevor Howard just very short?)  I don’t remember seeing the interesting Peggy Evans ( ↓ )  anywhere else. However the very cute Dora Bryan brings back good memories of excellent performances both before (The Fallen Idol, 1948) and much later (A Taste of Honey, 1961).  In for a nice bit is none other than pretty Jennifer Jayne, who sci-fi fans remember well from The Trollenberg Terror.

The Blue Lamp remains a satisfying high-quality cop drama. The documentary aspects are a big draw; it’s like a period recreation, but where nothing had to be re-created. We can even see what was playing in London movie theaters during the filming — not English pictures, but Hollywood’s Escape Me Never, Words and Music and The Fountainhead. Was the filming done in September, 1949? 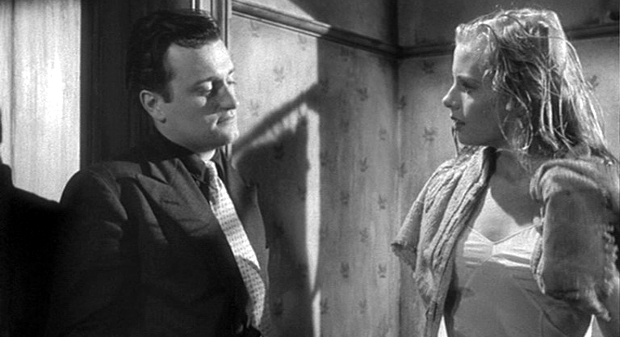 KL Studio Classics’ Blu-ray of The Blue Lamp is a flawless encoding of this sharp B&W show, filmed in large part in the heart of London. We don’t see as much residual bombing damage as was exploited for the 1950 picture Night and the City, which was filmed around the same time. Perhaps the most concentrated bombing was down closer to the industrial area of the docks. The audio is clear yet we appreciate the English subtitles’ help in understanding the accents. The writers seem to have avoided police jargon where possible.

Kino’s extras are really helpful — some or all were sourced from Studiocanal’s Region B Blu release from late 2016. Bryan Reesman’s dense commentary begins one’s education into exactly where this film came from and who the players were. That’s followed up by an archival audio talk with the writer Jan Read, interviewed by Charles Barr. Mr. Read is slow and weak-sounding at first, but proves to have a sharp memory for names and titles. A BBC audio featurette offers another general overview of the well-regarded The Blue Lamp. 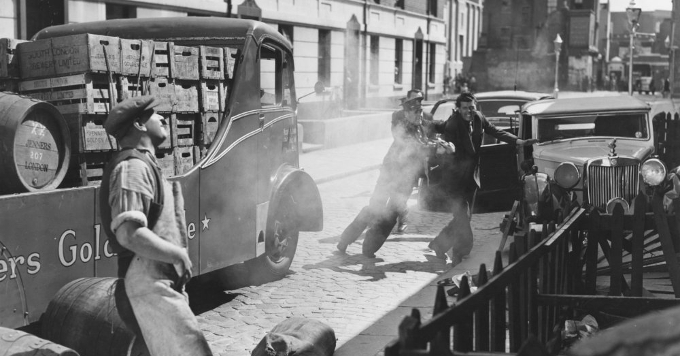 The locations featurette with the London-knowledgeable Richard Dacre is mostly an exercise in frustration — most of the sites he visits are all but unrecognizable now. I guess we can’t expect things to stay the same, anywhere.

The extras emphasize the special writing talent afoot in London at the time. Ealing Films took advantage of personnel recently turned loose by Gainsborough Pictures, a studio that was closing down.  Jan Read, the future screenwriter of First Men in the Moon and Jason and the Argonauts, got an early start working for Sam Goldwyn in Hollywood.  T.E.B. Clarke is of course the brilliant screenwriter (The Lavender Hill Mob, The Titfield Thunderbolt) who prided himself on being a troublemaking schoolboy before becoming a policeman.