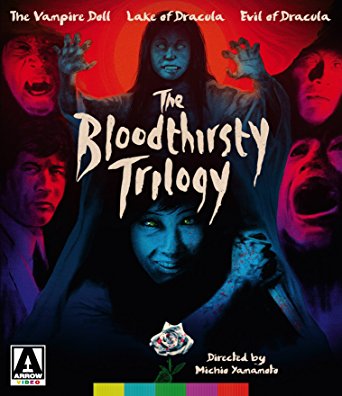 In 1970’s The Vampire Doll, a restless spirit’s killing spree is the product of a tragic family secret – a storyline out of a Ross Hunter weepy with arterial spray taking the place of tears. 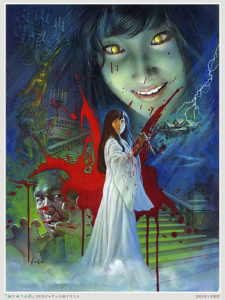 In search of her wayward brother and his girlfriend, Keiko arrives at a lonely country home only to find the sibling gone and his fiancee Yuko dead. Yuko’s saturnine mother is unusually tight-lipped about the circumstances surrounding her daughter’s death – but the truth is revealed late that night when Keiko is visited by the porcelain-skinned Yuko, golden eyes flashing and teeth bared.

The musty rooms littered with doll parts, a jovial doctor who dabbles in the occult, the unnerving staccato movements of Yuko when she moves in for the kill – all contribute to the film’s measured but never less than intriguing march to its climax, a startling confrontation between an angry ghost and a monstrous human  (the villain’s demise is carried out with a grisly panache that surely impressed the young Takashi Miike).

Photographed by Kazutami Hara, cameraman on Kurosawa’s tense Tohoscope drama High and Low, the actors are framed by widescreen compositions that emphasize a sense of isolation and unease. Aside from that blood-spattered finale, Yamamoto’s direction is discreet and his cast is admirably reined in – particularly Kayo Matsuo (of Shogun Assassin) as Keiko and, in a nearly silent performance, Yukiko Kobayashi (of Destroy All Monsters) as the star crossed Yuko.

An entertaining though rote horror thriller, 1971’s Lake of Dracula continues the theme of family trauma – in this case a little girl’s recurring nightmare of a white-faced corpse and a fanged killer ready to strike. Now living in a lambent lakeside village with a perennially setting sun, the grown-up Akiko begins to understand that her childhood dream was in fact a prophecy. 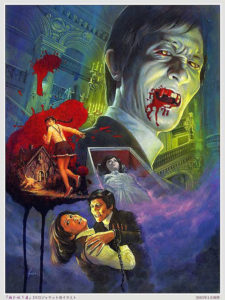 The orphaned Akiko lives with Natsuko, her brash younger sister who has casually flirtatious intentions toward Akikio’s handsome boyfriend. When a mysterious coffin-shaped box arrives, Natsuko falls prey to its bloodthirsty occupant; her coquettish manner turns feral and the sibling rivalry takes a  deadly turn.

The second film in Yamamoto’s trilogy is hampered by conventional monster movie theatrics while bowing deeply to tradition; the bestial vampire played by Shin Kishida (star of the enjoyably loopy Godzilla Vs. Mechagodzilla) is clearly based on Christopher Lee’s animal-like interpretation of the Count – Kishida caps his performance by dissolving into a face-melting puddle ala Horror of Dracula.

Yamamoto’s cast maintains convincing poker faces throughout, especially the dreamboat doctor played veteran Chôei Takahashi who still maintains a long and fruitful career, counting films like Tampopo and A Taxing Woman as part of his resume.

The late night escapades of naughty schoolgirls and their vampirized head-master animate Evil of Dracula in the manner of Hammer’s similarly salacious Lust for a Vampire. Though decidedly more circumspect than Yutte Stensgaard’s sultry bloodsucker, Yamamoto’s 1974 film is still closer to sexploitation than Noh Theater – though it does have its idiotic pleasures. 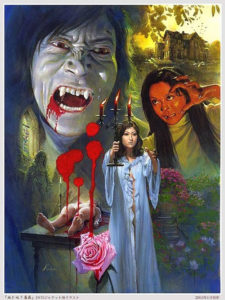 A young professor is offered a choice position by the headmaster of a finishing school but the suspicious academic is more intrigued by the old man’s recently deceased wife who rests, uneasily to be sure, in the cellar below.

The undead damsel begins to pay nightly visits to a trio of nightie-clad sophomores, vampirizing them one by one in titillating rituals that were de rigueur for R-rated 70’s horror fare like Hammer’s The Satanic Rites of Dracula and every other Paul Naschy film.

The movie ends with a comically prolonged scene of fisticuffs featuring the young professor and the undead headmaster – a misguided attempt to replicate Cushing and Lee’s frenzied showdown in the 1958 classic. In a poignant display of togetherness, the vampire and his mate disintegrate at the same moment, their fingers just touching as their skin drops from their bones.

As the professor pursued round the dorm rooms by randy bobbysoxers, Toshio Kurosawa  (of Lady Snowblood) never reveals any outward sign of his good fortune – or any other emotion for that matter.

Arrow Films has done a splendid job with their Blu ray release of Yamamoto’s so-called Bloodthirsty Trilogy. Presented over two discs, each film looks progressively better than the last – unfortunately the superior Vampire Doll suffers a bit from what looks to be a slightly faded print. Both Lake and Evil are sumptuous presentations with the cameramen Rokuro Nishigak and Hara getting a well deserved showcase.

The extras include a 15 minute presentation from UK genre pro Kim Newman, a stills gallery, original trailers for each film and a reversible sleeve featuring vibrantly in-your-face artwork by Matt Griffin (which is used to illustrate this review). The initial pressing includes a print essay by Jasper Sharp.

The 70’s may have been the real Golden Age of Hollywood – that era’s mix of street wise cynicism and New Wave affectations could be found in even the most humble genre movies. At the same time Hammer’s Dracula series was beginning to wear at the seams, Rollin, Kümel and Rothman were embarking on their own offbeat approach to the vampire legend.

Jean Rollin’s languorous sexploition/art films, like La Nue Vampire (The Nude Vampire), were plagued by low budgets and no advertising but have found a new audience with adventurous art house crowds.

Kümel’s Belgian-based Daughters of Darkness, starring the formidable Delphine Seyrig, was a richly pleasurable diversion in which the real vampire’s curse turns out to be ennui – Dracula’s Daughter in Marienbad. Rothman’s The Velvet Vampire, with its dreamy ambience, is in some ways a vampire tale that could only have been told in stoned and sunbaked L.A.