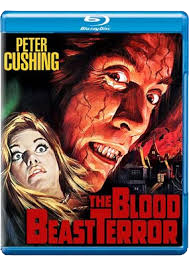 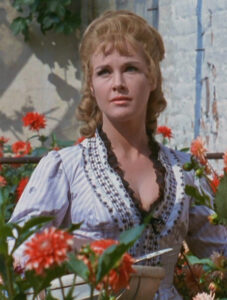 A serene British countryside is rocked by a series of brutal murders with a common thread; each victim has been mutilated and drained of their blood. All eyes are on a nearby university and its resident eccentric, the mysterious Dr. Mallinger, an entomologist with a fascination for Death’s-head moths. His daughter Clare shares his interests but her concerns are more personal than academic—Clare is a shapeshifter, transformed into a deadly butterfly when her blood is up and romance is in the air.

Directed by Vernon Sewell, this not so thrilling thriller features Robert Flemyng as Mallinger, and Wanda Ventham as Clare, whose blank-faced beauty suggests an otherworldly nature or a general lack of enthusiasm for the project—if it’s the latter she’s not alone: Peter Cushing stars as Inspector Quennell, a detective working under an assumed name, and judging by his performance Cushing might have preferred a pseudonym for the credit roll. It’s difficult to picture a more unhappy thespian than the Peter Cushing of  The Blood Beast Terror. 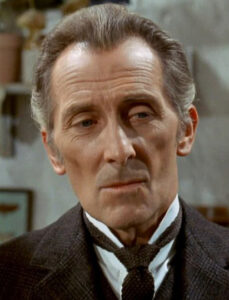 Even when playing a cold-blooded sociopath like Victor Frankenstein, Cushing was unable to disguise the fun he was having; in 1958’s Dracula his hyperactive athleticism electrified the theater—he was the Burt Lancaster of vampire hunters. In Sewell’s plodding monster mash-up, Cushing has no tables to jump on, no ropes to swing from—he seems to fade into the background even when he’s center stage. As is often the case with such misfires, the army of talent behind Sewell’s film was capable of much better things—including Sewell himself.

Early in his career Sewell displayed an affinity for special effects and miniature models, traits that moved Michael Powell to hire the young artist to direct 1934’s The Medium, a short film about a mad sculptor and his mind-reading model. In 1943 Sewell made The Silver Fleet for Powell and Emeric Pressburger but the director’s time at the top was short-lived—Sewell was relegated to a world of B-level budgets and quickie productions. Still, the director performed admirably in a long string of noirs and quasi-horror films: the atmospheric Ghost Ship with Hazel Court, an inventive crime picture called The Man in the Back Seat, and the enjoyably spooky campfire tale, House of Mystery produced in 1961 (its brief length led to an American debut on Kraft Mystery Theater). 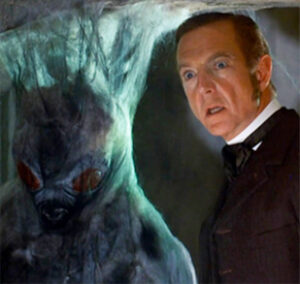 The Blood Beast Terror was produced by Tigon British Film Productions, a multifarious production company founded by Tony Tenser, a former publicist with a special talent for teasing ticket buyers—in 1955 he coined the term “sex kitten” for Bardot. Apparently Tenser’s mind ran in that general direction: in 1961 he and Compton Cameo Films scored with a run of nudie films like My Seven Little Bares and Naked as Nature Intended. In the mid-sixties he co-founded the Compton Group and established his art house bona fides with Polanski’s Repulsion and Cul-de-Sac. Any way you slice it, these were seminal films in their respective genres—his next venture would satisfy both art house snobs and grindhouse thrill-seekers; in 1966 Tenser co-founded  Tigon, producing Michael Reeves’s masterful  Witchfinder General, exploitation fodder like Zeta One, and Jean Rollin’s La Vampire Nue.

When Peter Bryan, the screenwriter for Terence Fisher’s Hound of the Baskervilles and John Gilling’s The Plague of the Zombies, began work on Blood Beast, he may have had another Gilling film in mind; The Reptile, a gothic-tinged thriller about a lonely beauty who transforms into a two-legged viper. A family tragedy with supernatural underpinnings, Noel Willman and Jacqueline Pearce play an estranged father and daughter dominated by a Malaysian curse, a macabre illustration of  “…how sharper than a serpent’s tooth it is to have a thankless child.” No such nuance can be found in The Blood Beast Terror, certainly not in Flemyng and Ventham’s lifeless relationship. 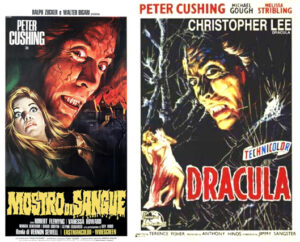 Cushing fans might be disconcerted by the cover art for Kino Lorber’s new Blu ray release of The Blood Beast Terror, the actor’s resemblance to Christopher Lee is uncanny. The art is in fact Renato Casaro’s painting for “Mostro di Sangue”, the Italian release art for Sewell’s film. The image of Lee was copped from the Italian poster for 1958’s Dracula, “Dracula il Vampiro.” Such brazen “borrowing” from other movie adverts was common in Europe’s film promotion, leading to a sinister figure from Roger Corman’s Tales of Terror popping up alongside Vincent Price in the poster for Corman’s House of Usher. At the very least these conglomerations suggest a netherworld where our favorite horror stars can mingle after hours, a classic horror multiverse.

Regardless of the film itself, Kino’s Blu ray is a beauty. Cinematographer Stanley Long may have been best known for low budget sex comedies like Adventures of a Plumber’s Mate but he also shot Reeves’s cult favorite, The Sorcerers. Long’s work on Blood Beast is perfunctory but it looks like a million bucks on the Kino release. Included on the disc is a new feature-length commentary from novelist/critic Kim Newman and writer/editor Stephen Jones. Bringing up the rear are a nice selection of trailers from the Kino vaults.