Secret agent Michael Caine must take on both the kidnappers of his son and his own suspect Army Intelligence colleagues in Don Siegel’s efficiently filmed, curiously tame suspense thriller. Delphine Seyrig is enticing and Donald Pleasance an unlikeable security bureaucrat, while the capable Janet Suzman and John Vernon fill out a top-flight cast that performs well in thriller surprisingly lacking in dramatic impact. 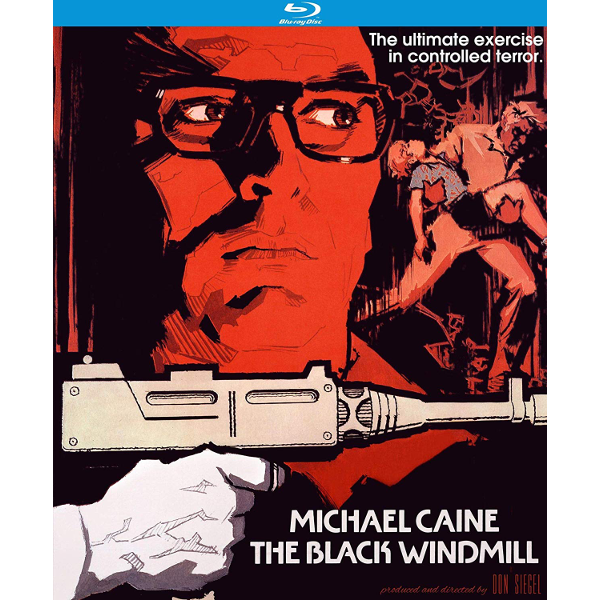 Something seems wrong from the first with The Black Windmill: the main credits are spelled out in a child’s building blocks. Since we don’t come to a spy-action film expecting to be confronted with petty domestic issues, the visual motif feels inappropriate, unwelcome. In 1974 the name Don Siegel meant hardboiled crime thrills, as in his blockbuster Clint Eastwood cop show Dirty Harry and the underrated escapist heist thriller Charlie Varrick). The poster for Windmill with a scowling Michael Caine promises a repeat of his intimidating Brit hood from Get Carter.

Before his string of weak paycheck features in the 1980s, the presence of Michael Caine on a marquee was almost a guarantee for a solid entertainment. The thriller that follows must not have been a good fit for Caine, which is odd because there’s nothing particularly wrong with it. The story is serviceable and Siegel’s direction is as muscular as we would expect, with some very good action sequences.

Michael Caine is Major John Tarrant, a mid-level agent for British Army Intelligence. Enemy agent McKee (John Vernon) seeks to force him to deliver a fortune in diamonds, by kidnapping his young son. The utterly ruthless McKee eliminates the functionaries that actually carry out the kidnapping, and uses the seductive Ceil Burrows (Delphine Seyrig) to contact Tarrant directly. The highly professional Tarrant goes into crisis mode, which in his case leaves no room for emotional histrionics. His wife Alex (Janet Suzman of Nicholas and Alexandra) fears that he doesn’t care, while Tarrant’s minders at work immediately wonder if he is withholding information. Fed up with the cool treatment from his superior Cedric Harper (Donald Pleasance) and the lofty, uninvolved section chief Sir Edward Julyan (Joseph O’Conor), Tarrant realizes that he’s no longer trusted when his own colleagues begin to shadow him. When McKee and Ceil plant evidence that Tarrant is a traitor, he has no choice but to go rogue to recover his son. He steals the diamonds, dodges all of Brit intelligence and prepares to face the kidnappers alone. The action leaps across the channel to Paris, and then back to the lonely English countryside.

A few years before, Michael Caine graced three fine ‘Harry Palmer’ spy thrillers ending with Billion Dollar Brain. Our vivid memories of his reluctant agent Palmer put a damper on his character here. The un-preposessing John Tarrant isn’t a cocky loose cannon with a wicked, insubordinate sense of humor. Neither is Tarrant a stone-cold brutal avenger, as Caine played so effectively in Get Carter. Caine seems to be doing nothing, when he’s likely following Don Siegel’s direction to underplay the part. Disappointment is unavoidable as we wait in vain for Caine’s star persona to come to the fore. Tarrant eventually does break out into action, but his Tarrant never becomes interesting to us. By the 1970s, even Clint Eastwood was no longer underplaying his tough guy roles.

This was Don Siegel’s first European film, and he does fine work maneuvering his camera through the streets of London, Paris and aboard a hovercraft ferry for Tarrant’s furtive return to England. Siegel has at his disposal a crackerjack cast of British pros; is the problem an unrewarding screenplay that doesn’t give them enough to do?  Donald Pleasance’s insincere spy boss Cedric Harper has only one level of ‘jerk’ to express; he unfortunately has no opportunity to put in any of his eccentric character touches. Harper is so transparently manipulative that we’d expect Tarrant would have long ago learned to thoroughly distrust him.

The notion that ‘nobody can trust anybody’ would seem central to this spy story, but it is not really addressed in Siegel’s slick, action-oriented approach. The presence of the silky Delphine Seyrig, and the rumor that Edward Fox was originally proposed to play Tarrant suggests that The Black Windmill may have begun as an attempt to reproduce the spare, ultra-realistic thrills of the previous year’s superior Day of the Jackal. Perhaps told that Siegel will create the thrills around him, Michael Caine ends up being somewhat dull. That’s tragic: Michael Caine has of course been in bad movies, but he’s rarely dull.

The Black Windmill has plenty of supporting characters, most of whom go through the motions in restrictive scenes with little dialogue. Only a few feel fleshed-out. We love Clive Revill (Avanti!) but he doesn’t do much more than make a few entrances and exits. Joss Ackland has sufficient screen time, but is also placed in the role of a functionary. Catherine Schell is present just for her good looks, as sort of a secondary tease to briefly interact with Caine’s Tarrant. The impressive Janet Suzman does fairly well with the suffering mother role. Delphine Seyrig has just enough screen time (and exposure) to remind us how well she can command the screen, and our attention. Following up on his excellent turn in Charley Varrick, John Vernon is an able but predictable bad guy.

The elaborately established story turns out to be very simple. The action reveals that the quiet Tarrant has unexpected resources: he survives several murder attempts, and pulls off a couple of slick tricks to elude his own spy colleague. The final confrontation brings out Tarrant’s formidable killer instincts. He rises to the challenge, but nothing much changes in his relationships. The film’s character scenes are realistic, but only a few really engage us.

The final blow comes after the action finale. Tarrant settles some scores directly, but a rushed fade-out leaves a number of unanswered questions. One would think we’d need an emotionally wrenching ending where Tarrant explains to his wife why he had to stay so remote from her. And what of his relationship to his unit at work?  Are twenty agents going to come forward to apologize?  What really becomes of Donald Pleasance’s character, a skunk well in need of a comeuppance?

The KL Studio Classics Blu-ray of The Black Windmill looks far better than the bleary print that Steve Nielson and I saw at the Village Westwood on a rainy day in August of 1974. By that time I was already a big fan of Don Siegel, thanks to film school screenings of his pictures Invasion of the Body Snatchers, The Lineup, and The Killers. I wasn’t expecting Siegel to make such a generic picture. I rarely have memory gaps about movies but must admit that I soon forgot what the movie was about. The fine Panavision cinematography is by Ousama Rawi (Zulu Dawn), who contributes a brief talk in an extra on the disc. More engaging is the full commentary by filmmaker and collector extraordinaire Mike Siegel, who gives us all the known information on the picture and offers his own thoughts as to why it’s not entirely satisfying. He says that the shooting script may have been deficient due to a writer’s strike.

The new cover illustration bears an image of Caine that seems too reminiscent of key art for The Ipcress File. The monochromatic original artwork (on the reversible insert sheet) sports Caine with an attitude more like his role in ‘Get Carter,’ against a stylized windmill graphic. Rendered ominously, with the tagline “The Ultimate Exercise in Controlled Terror,” we might think that that Father Merrin and Pazuzu were hiding inside that black windmill silhouette.

As a low-key thriller the show is really not that bad. The public likely rejected it in 1974 for the simple reason that they were led to expect something much more intense. If you’re a fan of Michael Caine, Delphine Seyrig or sub- Le Carre spy thrillers, The Black Windmill is worth giving a shot.