It was a winner right out of the starting gate, an instant classic that’s still a pleasure for the eyes and ears. Carroll Ballard and Caleb Deschanel’s marvel of a storybook movie has yet to be surpassed, with a boy-horse story that seems to be taking place in The Garden of Eden. 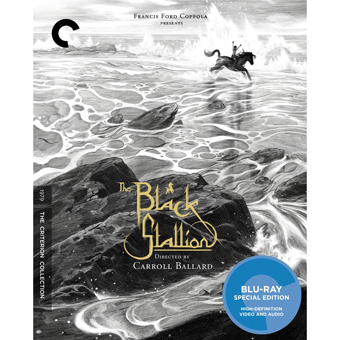 Francis Coppola divided audiences with his war epic Apocalypse Now, but in the same year his name also adorned a show much more universally loved, Carroll Ballard’s The Black Stallion. Hollywood has been making movies about ‘special’ horses ever since film could spool through a camera. Every generation got its show about ‘a wild stallion that yearns to be free,’ or the Very Important Horse that will win the Kentucky Derby because of its love for Shirley Temple. Just as the still-seminal ‘dog’ movie of our childhood is the sentimental, often absurd Lassie Come Home, the touchstone horse movie is probably 1945’s National Velvet with Elizabeth Taylor and Mickey Rooney. Ballard’s The Black Stallion bests that Clarence Brown movie in most every category, and also links to it with a bit of sentimental continuity, with its casting of actor Mickey Rooney in one of his better post-stardom roles. 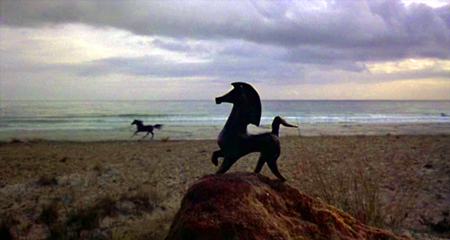 Carroll Ballard’s intensely visual movie plays like a children’s storybook writ large. It is packed with unforgettable images, often more than one per scene. A steamship sinks off the coast of North Africa. Young Alec Ramsey (Kelly Reno) loses his father (Hoyt Axton) and washes ashore alone on a vast beach, with only a pocketknife and a horse-shaped toy figurine. But also surviving is a magnificent Arabian stallion, “The Black” (Cass-Olé). Alec helps free it from some ropes and slowly wins its friendship. When rescue comes, Alec takes The Black home with him to America, where it lives in his back yard until they meet the retired jockey Henry Dailey (Mickey Rooney), who encourages the boy to find out if the horse can race. Now a widow, Alec’s mom (Teri Garr) doesn’t like the idea that her remaining ‘man’ wants to risk his life riding a race horse. But Alec knows the meaning of destiny.

Before The Black Stallion animal movies had gotten into a slump, with cheap outfits using beasts of all kinds to sell sappy stories. Will the magic horse help Jimmy keep his parents from divorcing? Will the magic deer teach Suzie the real meaning of Christmas? I remember liking a movie called Misty but can’t remember much about it beyond scenes of the horses running on a vast Carolina beach. It looked kind of windy. Albert Lamorisse of The Red Balloon made a French film called White Mane that has a lot in common with The Black Stallion. Its main character is a kid, and it emphasizes artistic visuals. There was also a movie called The Sad Horse (1959), which at the age of seven was an incredible downer. People in the story were sick, maybe the horse too, and I remember a lot of crying. Fox put out an MOD disc of that recently; maybe I should go find out how depressing it really is. 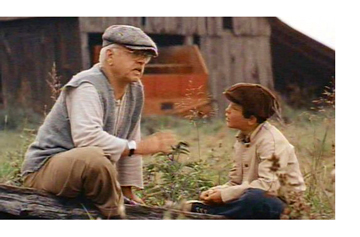 The Black Stallion is the antithesis of depressing. The movie has minimal dialogue, at least until Clarence Muse and Mickey Rooney show up. One of the writers is Melissa Mathison, who would be immediately tapped to help with E.T. The Extraterrestrial, another show that conveys the feel of a cherished children’s book.  The excellent scenes on the sinking ship are scripted to give us the subjective viewpoint of the curious young Alex. The shipwreck is limited to several intense, traumatic images, such as a spectacular shot where we see the entire stern of the ship sticking up out of the water. Is this a full-scale set accomplished by the experts at Cinecittá? A big undertaking for just twenty seconds of film, it’s more proof that The Black Stallion knows exactly what it’s doing. In the old days, Ballard and Deschanel would have been forced to use a stock shot.

Carroll Ballard and Omni Zoetrope put their production money completely behind ace cameraman Caleb Deschanel, a skilled artist who combines an exacting eye and a willingness to hold out for quality. The Zoetrope gang must have believed in him, for his only previous feature is More American Graffiti. Deschanel advanced immediately to the demanding visuals of Hal Ashby’s Being There and Philip Kaufman’s The Right Stuff. In the earlier sections of this movie the roles of director and cameraman are almost completely blurred. The action is scripted but is often not staged for the camera in any conventional way; it’s as if Deschanel hired five angels with five magic cameras, waiting to catch every important action.

The best-remembered scenes observe the castaway horse & boy on the beach, which is less of a survival ordeal than a return to the Garden of Eden. The old MGM film The Yearling went surreal-fantastic to present its vision of a swamplands kid running wild with nature, cavorting with deer and leaping through the woods, accompanied by eerie strains of classical music. The association of childhood innocence with nature and the animal world is a common thread in coming-of-age stories; the nice thing about The Black Stallion is that it doesn’t feel the need to kill off the animal to make some point about growing up and accepting the real world. Although Alex and The Black ought to be starving, our attention instead goes to a string of ‘how did they film that?’ sequences. Alec slowly wins the confidence of the enormous black horse that holds its tail high in the air, like a flag of pride. 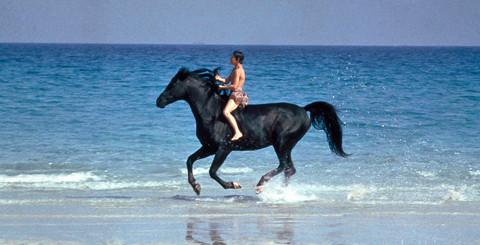 The imagery has an emotional flow, like poetry. The camera and cutting pace are matched to the natural rhythms of the horse’s movements. When the boy and the horse gallop through the surf, the camera flies alongside them. The images of course work closely with Carmine Coppola’s sweeping music score, a set of romantic themes that manage old-fashioned peaks of emotion without overstatement. The only hint of schmaltz is the slight ‘Arab’ theme that sneaks in during close-ups of The Black’s face. We wonder if the horse is going to whinny in Arabic.

The movie remains in ‘children’s book’ sketch mode when Alec returns home. Things are kept so basic that we don’t question how the North Africans allowed Alec to take the horse home with him. It’s just there. Teri Garr’s mother is a vision of motherhood idealized for a little kid — sweet, nurturing, irrelevant. There’s never a question that she’ll eventually allow her twelve year-old boy to ride in a highly dangerous professional horse race. I ask these questions as a way of marveling at how well the movie works, considering that it could never get past a conventional studio approval gauntlet.  A studio head wouldn’t necessarily see The Black Stallion except in terms of similar movies that came before. It’s obvious that the producers believed in Ballard and his ‘vision.’ Yep, in movies like this one there is such a thing as a ‘director’s vision.’ 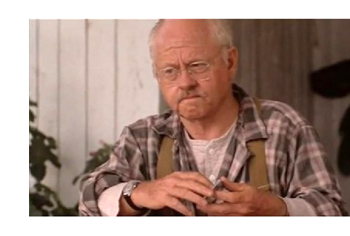 Some scenes back in America are formal and spare, going for a Norman Rockwell look. Others become an editor’s dream of short, expressive cuts of telling details. The prep for a race is an almost impressionist blur of activity. When the big finale comes along, Ballard and Deschanel don’t cut corners. We see an enormous grandstand filled with spectators. Alan Splet’s impressive audio tracks sell us on things we can’t see beyond the edges of the frame. The big race bears down on one idea, whether or not Alex and The Black can make up for a fumble at the starting gate. No fancy effects or angles are used, just shots that focus on the horse and rider blasting forward down the track like a black rocket. Little Kelly Reno, a horseman practically from infancy, looks born to be in the saddle. The filmmakers know to return the audience to imagery of Alec’s ride in the surf, his arms upraised. And viewers likely stayed through the end credits, to see more satisfying images of the horse and boy playing on that faraway beach. I imagine this show made for a lot of happy movie-going afternoons.

The Black Stallion and its Oscar nomination boosted the stock of the talented Mickey Rooney back up to a respectable commercial level. He’d never regain his top position in the industry, despite numerous impressive character parts and a few career highlights like his Sammy Hogarth in the TV drama The Comedian. He did all kinds of roles but eventually settled into overly sentimental ‘mentor’ roles for kiddy epics. Of course, once this movie hit, Rooney would perform the same basic role a dozen times again, in lesser pictures. 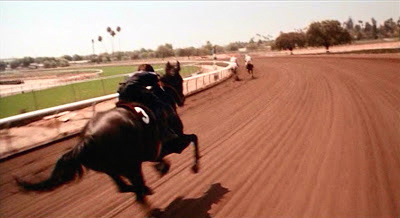 The Criterion Collection’s Blu-ray of The Black Stallion is exactly what we want to see, a video version of this classic that replicates the look of theatrical screenings. The image is often so clear that we think we might be watching 70mm. The look of the film’s different sections is also intriguing, as with the visual contrast between the green-blue boat sequence and the blazingly clear and bright African beach. Deschanel definitely subscribes to the idea that images influence psychological moods.

Criterion’s presentation gives us five of Carroll Ballard’s earlier short subjects, that demonstrate that the talented director didn’t emerge from nowhere. They’re quite interesting, especially one about a rodeo. Caleb Deschanel filmed one of them, and also Ballard’s later feature Fly Away Home.

Deschanel appears in a new interview. He talks quite passionately about Ballard’s loose filming style, looking for new ideas to film during the shoot. Ballard is interviewed by critic Scott Foundas, and tells the story of how he came to work in film after an earlier interest in auto design, and a stint in the Army. Ballad began making his own movies because he found the industry totally locked up, with little hope of entry for an outsider. Still photographer Mary Ellen Mark discusses her photos from the film. As many show the filming setups and crew at work, they comprise an unofficial making-of piece. Critic Michael Sragow provides the foldout insert essay.

I was witness to a rather depressing phenomenon in the early 1980s, when I worked editorial on several years’ worth of Sea World commercials. The creative head for the ad agency wanted to stress Sea World as a family destination, so themed each season’s spots by baldly cribbing the concept of whatever children’s film was popular that year. When The Black Stallion was a hit, the ads showed a little boy befriending a killer whale (but not riding on its back with his arms up). An E.T. rip-off compared the alien’s magic touch to the kiss of the Orca, this giant pink tongue tapping the cheek of a little blonde girl. In each case, the narration copy made the connection, as did music that aped the films’ styles. It was pretty shameless, but the client went for it, and so did the public. I eventually escaped from Sea World, Denny’s and Mattel commercials into something with far more dignity and ethics: film trailers for The Cannon Group!