This time they may have gotten it right! If a knife or a straight razor won’t do, how about killing a victim with 500-pound metal artwork studded with spikes? Dario Argento distilled a new kind of slick, visually fetishistic horror who-dunnit thriller subgenre with this shocker, aided by the dreamy cinematography of Vittorio Storaro. 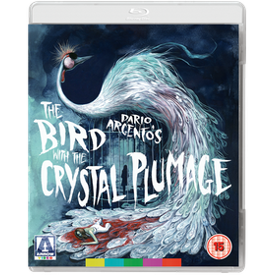 From the moment we hear the tinkling notes of Ennio Morricone’s oddball music score, we know we’re in different territory than previous murder mystery movies. Dario Argento became a buzzword in the 1970s, but his popularity exploded with the first wave of DVD releases. The flood of DVDs of vintage European film product was very selective: no sword and sandal pepla to speak of, and at first not too many police action pictures, but a regular tsunami of quality Euro-horror of all kinds. At one of the few fan conventions I attended in the early 1990s, I saw dealers selling rip-off VHS tapes of obscure foreign movies with strange names, in mostly grim quality. I knew I didn’t want to pay twenty $ dollars a shot to see them in that condition.

Let’s assume that you already know about Gialli and the general trend of ’70s Italo pop cinema. It took DVD to show us how great some of these pictures looked. The overlap of early video adopters and potential fans of Euro-horror was strong in those days, before college kids found ways to pirate everything off the web, and made do with video on their smart phones. And the new DVDs, from a variety of vendors, were beautifully remastered with original audio tracks and extras. They made new widescreen TV monitors look great, and introduced a new (the last?) generation of film mans to the lush lounge soundtracks of continental composers like Bruno Nicolai, Riz Ortolani, Stelvio Cipriani, and the master, Ennio Morricone.

Back in the ’70s I think I was aware only of Dario Argento’s Suspiria and Four Flies on Gray Velvet. The big initial title for the Giallo slasher thriller subgenre was his 1970 The Bird with The Crystal Plumage (L’uccello dalle piume di cristallo), a visually stunning horror-inflected who-dunnit . It was the first direction credit for the former critic and screenwriter, and it’s no amateur effort. Ennio Morricone took a break from Western scores to provide the eccentric music that gives the film its modernist feel. Key collaborator Vittorio Storaro would soon become one of the more celebrated cinematographers in the world. The cinematographer infused the images with the high gloss of photos in Italian fashion and interior design magazines, the ones that weigh a pound each. By the time of Deep Red Argento’s films had become incredibly lush exercises in visual fetishism. The reflections from glossy close-ups of fancy footwear were almost as important as the story being told. Argento’s script won’t impress Agatha Christie fans, as tracking down the killer is a string of suspect encounters, most of which could be shuffled in any order. In Rome, American writer Sam Dalmas (Tony Musante) witnesses a bizarre murder attempt at the art gallery of Alberto Ranieri (Umberto Raho). Trapped between glass doors, Sam is unable to assist the helpless victim Monica Ranieri (Eva Renzi). Inspector Morosini (Enrico Maria Salerno) confiscates Sam’s passport but decides he’s not a suspect. Morosini doesn’t mind that Sam and his girlfriend, model Julia (Suzy Kendall) investigate a related string of murders on their own. Surviving an assassination attempt by the sinister Needles (Reggie Nalder), Sam talks to an imprisoned pimp (Gildo Di Marco) who might know the assassin, a gay art dealer (Werner Peters) and the artist Berto Consalvi (Mario Adorf), whose disturbing painting of a murder scene was purchased by the mad killer. Bird expert and Sam’s friend professor Carlo Dover (Raf Valenti) borrows a recording of the killer’s voice, which may hold an important clue.

The way Argento tells his story made Crystal Plumage into a worldwide hit, wherever local censorship tolerated his borderline transgressive imagery, an impressive intersection of the skills of director Argento and cinematographer Storaro. The attractive Cromoscope visuals make use of strong compositions emphasizing sinister shadows and menacing silhouettes, but the style is less German expressionism than it is Italian fashion fetishism. We’re given tight close-ups of leather gloves and jackets, and a set of polished knives mounted in red felt. Argento’s mad killer is a collection of sensual textures, and the movie makes a glamour statement out of killings with butcher knives and razors. That and a fairly competent flair for suspense distinguish Crystal Plumage from other thrillers circa 1970.

Is the violence-against-women content offensive? One of the anonymous victims is first viewed preparing for bed in a see-through nightgown, before being savagely tormented by the knife-wielding fiend. We don’t ban films for their moral content (at the moment), but it’s true that this stuff seems pretty ugly and exploitative now. There have to be plenty of lonely and insecure guys that eagerly identify with the power and privilege of a sexually charged slasher murderer. Too many men already think of sex as a power relationship.

The episodic script is stacked with filler scenes with eccentric characters, like an American TV detective show. Argento goes for exotic detail made possible by the demise of the censors — a lineup nabs a transvestite, while the curious Dalmas seems to interview nothing but extroverts with alternate sexual-preference lifestyles. The most amusing of these is Mario Adorf’s hermit of an artist, who manages to paint without an income by raising his own food supply.

Don’t look to Crystal Plumage for sophisticated content. Argento’s stylishness can’t hide his reliance on clunky Hitchcock references. I caught a number of angles through peepholes, and a killer in a distinctive yellow jacket escapes by disappearing into a room full of men with identical jackets. There’s also an amusing twist on Hitchcock’s frequent culinary jokes, which will surely gross-out pet lovers. For his biggest revelation, Argento swipes an audio clue from Akira Kurosawa’s film work.

On the plus side, Argento’s Hitchcock quotes aren’t the blatant plagiarism found in Brian De Palma pictures. He also comes up with a number of interesting, fairly original visual ideas. Although 1970 was the height of the craze for shallow- focus montages, Crystal Plumage uses its long lenses with discretion and saves the zooms for disturbing overstatement, like a pull-out from the tongue of a screaming victim. Sinister reconnaissance views of potential victims pop to B&W as ‘stills’ are photographed. The reverse of that process creates an impressive frisson when a B&W photo of the mystery painting is suddenly replaced by the color original — hanging on the murderer’s wall. Argento allows his cast to be reasonably natural in their (admittedly unchallenging) roles. Leads Tony Musante and Suzy Kendall are comfortably bland. Enrico Maria Salerno top cop is thoughtful instead of the expected bully. Various eccentrics (Pino Patti, Gildo Di Marco) are amusing, with favorite Werner Peters (The 1,000 Eyes of Dr. Mabuse, 36 Hours) mincing around an antiques store in a guest bit. He compares well with Martin Balsam in The Anderson Tapes. The interesting Eva Renzi and Umberto Raho are the married owners of a high-class art gallery, which seemingly specializes in artwork custom-designed for various bizarre murder scenarios. Some exterior views of the gallery resemble a surreal diorama, with its oversized statues of things like a dragon’s claw.

Argento opens with a horror set piece so arresting, its effect lasts through the rest of the film. Responding to a struggle he sees in the art gallery, Musante’s Sam is trapped in the gallery’s portico, between two glass walls. It’s like Rear Window, except that he’s barely five feet from the bleeding Monica Ranieri, and unable to aid her or run for help. The setup confects a frightening, voyeuristic distillation of the horror film experience — the dreadful spectacle is happening in full view, but audience surrogate Sam can do nothing about it.

Sam later returns to the same fateful location by a different route, an idea perhaps borrowed from the underrated 1945 comedy noir Lady on a Train — a Deanna Durbin movie! We have already seen the installation of a massive and dangerous-looking sculpted artwork, a big metal slab that looks like a pancake griddle for Attila the Hun. As soon as we see the spikes poking out of that thing, we know it’s going to show up later. Don’t forget the old movie rule — if in the first reel you introduce a ten-foot sculpture likely to crush and impale somebody, you must put it to use in the last reel.

Crystal Plumage has its plot holes and unfair red herrings, but nothing we can’t live with. Argento also requires a couple of extra scenes to wrap up his story, but otherwise his murderous movie machine is a winner.

Arrow Video USA’s Blu-ray + DVD of The Bird with the Crystal Plumage is, I believe, a follow-up on a 2011 Blu-ray that came in for heavy criticism for video quality and aspect ratio. On that earlier disc consultant Vittorio Storaro used his clout to promote his personal bias for the 2:1 aspect ratio of his proprietary format Univisium. Storaro also has a bad habit of re-inventing color for new transfers, not reproducing original looks.

Arrow is quick to note this time that what we’re getting is a brand new 4K restoration from the camera negative in its original 2.35:1 aspect ratio, produced exclusively for this release. That extra image real estate makes a big difference, especially in that opening set piece. The nighttime view of the art gallery itself looks like modern art, or one of those see-it-all glass buildings from Jacques Tati’s Playtime, that look real, but also remind us of dream imagery.

Arrow has also splurged on new extras, some of which enliven the discussion of the long-exhausted subject of the artistry of Signor Argento. The feature commentary is handled by this years’s go-to Euro-horror expert Troy Howarth, with Alexandra Heller-Nicholas and Kat Ellinger appearing on camera to provide featurette film analysis. The reportable facts about Crystal Plumage haven’t changed — it still comes from the same literary source as Gerd Oswald’s Screaming Mimi. The movie’s status as a German co-production may account for some of the film’s Krimi- inflected mystery touches, and perhaps also for the presence of Reggie Nalder (who is of course a walking Alfred Hitchcock reference unto himself).

The fans should be tickled by the foldout poster and the lobby card reproductions, while Arrow’s fat essay booklet reminds us that these top-tier disc boutiques are just as capable of creating reference-worthy added-value extras as The Criterion Collection.

Arrow is no longer a mostly UK-based company — almost all releases appear to be simultaneous in both markets. If my information is correct, the formats are the same for both versions – the Blu-ray encodings are good for both Regions A and B, and the DVDs are NTSC, on the principle that UK TVs play both formats. I’ve figured that out from various hints dropped here and there online, so if I’m wrong I’d appreciate a correction.