Clever plotting goes into overdrive for this light-comedy proto-paranoid film noir about a magazine publishing empire so organized that it seems a sci-fi invention from the future. Ray Milland’s charismatic fall guy finds himself embroiled in a murder plot filled with false identities, and a manhunt that he must supervise… to catch himself. Maybe Robert Zemeckis and Bob Gale watched this from their cribs, and applied its chaotic symmetry to their pretzel-plotted comedies! 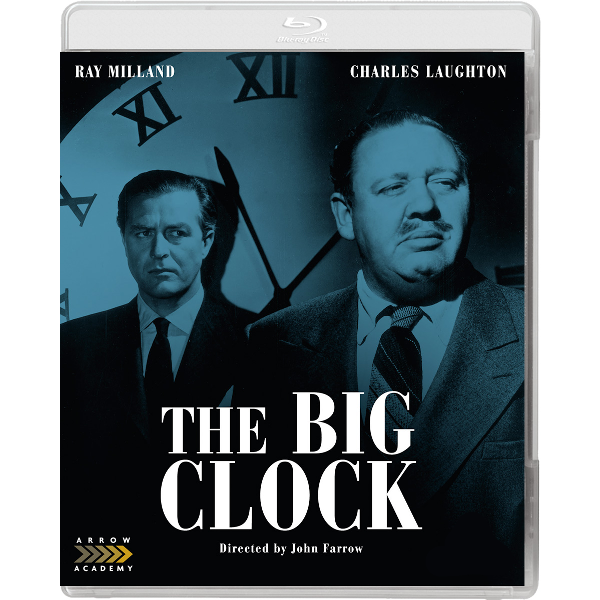 The thriller The Big Clock crosses over into light comedy so frequently that it edges away from the mainstream of film noir, despite the acutely noirish maelstrom of crazy coincidence that traps its characters. The extremely clever script creates an exciting world inside a publishing company so modern it was probably considered futuristic in 1948. At the center of the plots and schemes is a deviously brilliant Charles Laughton, and Ray Milland is excellent as the executive who must simultaneously out-wit frame-ups from within and without. As the dragnet for the killer slowly zeroes in on Milland, we get a thrilling and hilarious puzzle picture — and a taste of future paranoia in the corporate world. From a single skyscraper in Manhattan, the ruthless, autocratic and amazingly successful Earl Janoth (Charles Laughton) runs a formidable publishing empire encompassing dozens of popular magazines. His top editor is George Stroud (Ray Milland), who has promoted Crimeways magazine into the most successful monthly in Janoth’s stable. Crimeways doesn’t just report on sensational murders, it solves them:  Stroud systematically sets his investigators to pursue clues the police overlook. But now George is in a real jam. He was the last person to see mystery woman Pauline York (Rita Johnson) alive, and he has left plenty of clues behind him. Janoth and his ax-man executive assistant Steve Hagen (George Macready) want Stroud to find the killer!

The Big Clock is so complicated that I still have unanswered questions about minor plot details, and I’ve seen the picture four or five times. It’s great entertainment in every respect, as we watch the characters make their desperate little moves. As we know more than any of them what is going on, watching the mystery unfold in the Janoth Building is like peering into a beehive with a revolution brewing. Janoth Publications has its own army of security men. It’s impossible to guess how George Stroud will escape the law, or his employer’s hired killers.

The marvelously bigger-than-life Earl Janoth is a nice stretch for the skills of the top actor Charles Laughton. The despotic businessman lets his personal obsessions dominate all aspects of his employees’ lives. His micromanagement extends to the light bulbs in a broom closet, over which a janitor loses his job. Tardiness is inexcusable. The gigantic mechanical clock in the office lobby serves as a symbol of Janoth’s tyranny in this business dictatorship. The Big Clock is mechanically synchronized with every timepiece in the building, the way our personal electronics are now, a notable futuristic touch. The sudden stopping of the Central controlling clock sends some of Janoth’s minions into a nervous tizzy, like the robotized denizens of Jean-Luc Godard’s Alphaville.

The story kicks into gear over an equally modern issue of employee loyalty between family and job. When Janoth forces George to skip his much delayed family vacation because of an artificially-induced company crisis, George Stroud simply quits. That’s the dilemma of every working person today who is asked to sacrifice just because some supervisor wants to prove their potency. Stroud’s executive revolt puts him way ahead of Billy Wilder’s C.C. Baxter in The Apartment. But George’s bid for freedom entangles him with another disgruntled Janoth employee, the boss’s mistress. What happens in her apartment puts Stroud’s job, his marriage and his life in jeopardy.

The Big Clock harmonizes so well with The Apartment that it’s tempting to think that it influenced or inspired Billy Wilder’s bittersweet/cynical romance. The setting in both films is a modern high rise office that’s a world unto its own. Lowly clerks and executives are shuttled around at the mercy of the top man. Both employee heroes become involved with the boss’s mistress. A death/near death occurs in her apartment/love nest. The employee tries to hide the death/near death. Other company employees visit the apartment, complicating the situation. People associated with the apartment building get the wrong idea about the hero, presuming him to be a killer/womanizer.  A central scene in both pictures is a drunken binge in a bar with a woman who probably wants to seduce the hero. Both big bosses use underlings to cover up their personal indiscretions. There’s a shared speech in which a mistress complains  that she’s just one in a long line of the executive’s conquests among the staffers — secretaries, models, elevator operators. Like I say, the two movies share a lot of interesting coincidences.

The idea of a detective assigned to track himself down isn’t exactly fresh but it is given some progressive twists. George watches helplessly while his clever operatives slowly single him out, his own training and methodology defeating his attempts to throw them off the scent. When eyewitnesses that can identify George are brought to the Janoth building, his mobility becomes restricted. He, and we, can feel the net closing in.

The screwy clues that incriminate George Stroud are cleverly orchestrated around the main theme. The murder weapon is a kind of clock. The color green finds its way from a ribbon to a stain on a handkerchief, an interesting clue for a B&W movie. Like a prototype James Bond, Stroud must work undercover — but in plain sight — in a futuristic company where everyone’s movements can be monitored and armed police have been told to shoot on sight. Stroud throws a monkey wrench into Janoth’s organization, first by interrupting the Big Clock and then by sabotaging an elevator restricted for executive use.

The executive elevator aligns neatly with The Apartment’s executive washroom, as a symbol of the corporate class divide. Stroud immobilizes it by sticking something into a side gap in the elevator door, the same way George Lazenby’s 007 outwits Blofeld’s electronic doors in On Her Majesty’s Secret Service. It may be no accident that the producer of The Big Clock is Richard Maibaum, a key writer behind the 007 film franchise.

The show also makes use of amusing acting bits provided by excellent Paramount contract players. Richard Webb (TV’s Captain Midnight) is one of Stroud’s investigators, along with the ubiquitous Douglas Spencer (The Thing from Another World). Margaret Field (The Man from Planet X) is a secretary and Noel Neill (Invasion, U.S.A.) the elevator girl constantly being propositioned by a C.C. Baxter-like clerk. Reportedly hidden amid the huge staff at Janoth Publications are Ruth Roman and Diane Stewart. Relatively diminutive Harry Morgan plays against type as Janoth’s dangerously sullen bodyguard, an updating of The Maltese Falcon’s sawed-off henchman Wilmer.

The executive hatchet man George Macready is willing to do anything to support his all-powerful boss, legal or not. Rita Johnson has the true thankless role as the mystery woman, George Stroud’s drinking partner. Elsa Lanchester (Laughton’s real-life missus) is delightfully funny as an eccentric Greenwich Village painter whose studio overflows with unsold art and fatherless children. She’s a dotty marvel when trying to remember what became of her various husbands. Her machinations in the Janoth offices become crucial when we discover that she’d rather get paid than finger Stroud — she’s one of the few who can link him to the murder.

Maureen O’Sullivan (the director’s wife) plays Georgette, George Stroud’s neglected wife. Georgette contributes a sterling assist as one of the few confederates Stroud can fully trust. Mistaken identity adds to the fun when Stroud enlists an actor friend from his favorite bar to help him nail the real killer. By the time the fast-paced picture is racing to its climax, the story complications have reached the level of farce. Yet things are kept just serious enough for us to experience George Stroud’s fearful isolation.

The Big Clock is light entertainment, but Earl Janoth’s arrogant power over his employees reads like the future of American working life. And that big clock in the lobby comes across as an expressionist master stroke, a symbol escaped from Fritz Lang’s Metropolis. The film scores as a film noir, yet most people will react to it as a solid comedy thriller.

The film was remade (sort of) by Roger Donaldson in 1987 as the relatively humorless No Way Out.

Arrow Academy’s Blu-ray of The Big Clock is a surprisingly good-looking encoding of this 1948 gem. The show has been given a thorough digital going-over to help correct density problems. It’s an improvement over the older DVD from 2004.

Arrow provides the extras that the old Universal DVD did not. Adrian Martin’s informative commentary digs into the film’s complicated background; John Farrow was apparently a difficult man in many ways. The two on-camera lectures by Adrian Wooton (on the film) and Simon Callow (on Laughton) are somewhat unfocused; Callow in particular seems to be discovering his subject as he goes along. His loose string of associations ends up with him referring to the actor as a faggot — even though he’s trying to report that slur as the appraisal of actor Ray Milland. A radio show is present along with a trailer and an image gallery.

The nicely illustrated collector booklet (only with the first pressing) has a good essay by Christina Newland, The Inner Workings of The Big Clock. She nails the film’s connection to the ‘organization man’ office-set classics of the corporate ‘fifties, but my structural links to Wilder and Diamond’s The Apartment are safe.