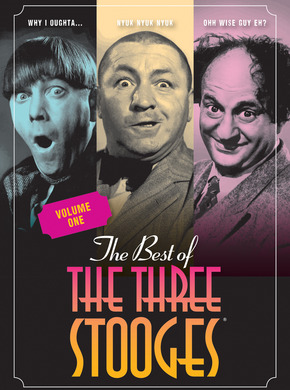 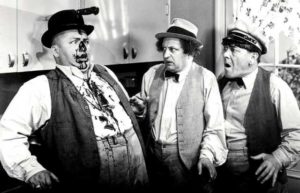 Garden variety slapstick has always been fraught with physical peril but The Three Stooges took the concept to medieval levels, their persona defined by  equal parts vaudeville and the Spanish Inquisition.

With clothes seemingly hijacked from clotheslines and manners borrowed from feral raccoons, the scrappy trio were nothing if not street survivors – always on the dole or making do with hardscrabble day jobs. Their raw brand of comedy, all simmering anger and violent outbursts, was the embodiment of depression-era resentment. 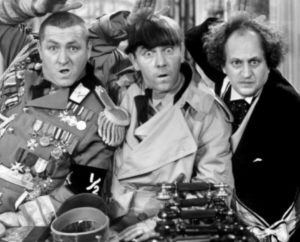 Ticket buyers loved them, so much so that Columbia president Harry Cohn used them as a bargaining chip when striking deals with hungry theater owners – if exhibitors wanted The Three Stooges, they were stuck with Blondie Plays Cupid. The act survived for nearly 40 years outlasting Cohn, Blondie, critical brickbats and the P.T.A. – yes, they were street survivors.

Time-Life has assembled those rough and tumble short films, most barely scraping 20 minutes in length, in a monstrous 13 DVD set, The Best of the Three Stooges. The films starring Moe Howard, Larry Fine and “Curly” Howard are spread over 8 discs while 5 other platters contain some fairly obscure Stooge-related theatrical cartoons from the 30’s and 40s. Bringing up the rear are solo turns from Shemp Howard, Joe Besser and Joe DeRita, a series of documentaries and 3 full length feature films including Have Rocket, Will Travel. 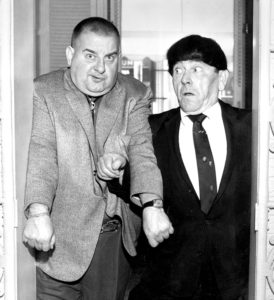 The magnitude of the set exposes the pitfalls of the working class Stooge in front of and behind the camera, a decades long journey both fruitful and soul-crushing – The Death of a Salesman with pratfalls.

The punning titles were a barometer of the team’s ingenuity – some, like They Stooge to Conga, You Nazty Spy and What’s the Matador? might inspire chuckles while others (honestly, most others) like We Want Our Mummy exposed both a dearth of imagination and the desperate need to grind out more product. 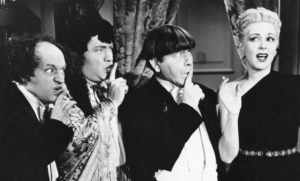 Over the years there were unqualified laughs to be had and even some unexpectedly lighthearted moments (devoid of eye-poking and general carnage). In spite of its title, Violent is the Word for Curly features a genuinely joyful moment – the boys’ be-bopping rendition of “Swingin’ the Alphabet.” The purebred silliness of 1945’s Micro-Phonies, with a dragged up Curly impersonating an opera diva, is a fast-moving forecast of Some Like It Hot that could seduce the most hardened Stooge-hater. 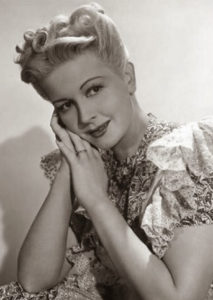 Adhering to strict vaudevillian rules, the Stooges’ boy’s club depended on a feminine foil in all her incarnations, matriarchal,  maternal and good-time girl – actress Christine McIntyre, a classically trained singer with a forgiving nature and incredulous smile fit the bill.

Her kindly manner extended to her off-camera presence – called on to decimate Shemp in his solo effort, 1947’s Brideless Groom, she resisted till her frustrated co-star begged “Honey, if you want to do me a favor, cut loose… give it to me Chris and let’s get it over with.”

It was Shemp who was called on when Curly’s failing heath forced the team to find a replacement (he was an original member of the team before Columbia came calling). Shemp’s sudden death in 1955 created another crisis and Joe Besser enlisted to take up the slack (but none of the knocks – his contract demanded that no smacks, slaps or injuries would be tolerated.)

After a slow and dispiriting swan dive in the 50’s, the Stooges enjoyed a reversal of fortune thanks to the release of their films to TV and a struggling burlesque comic,  “Curley Joe” DeRita, signed up for a kid-friendly feature film revival. Each of those comics, Shemp, Besser and DeRita, took tortured routes to their eventual Stoogedom and director Jules White was their most prominent ringmaster. 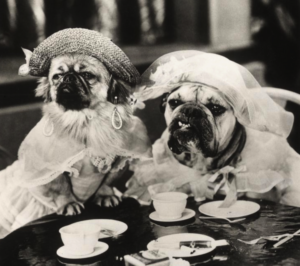 White was a sometime actor (he had a bit part in The Birth of a Nation) and switched to the other side of the camera in 1926 with the bizarre Dogville Comedies, a series of shorts featuring all-canine casts satirizing current Hollywood hits (All Quiet on the Canine Front) before beginning his long tenure at Columbia’s short-subject division.

The industrious Hungarian struck gold with the Stooges and spent most of his career directing them or trying to duplicate their success including a dire series of farces starring dancing comedians Wally Vernon and Eddie Quillan with titles like Crabbin’ in the Cabin (don’t ask.) Other White efforts toplined Andy Clyde, Hugh Herbert and, soon enough, Shemp, DeRita and Besser.

Most of those films, if not all, were staged with the finesse of a stag movie. 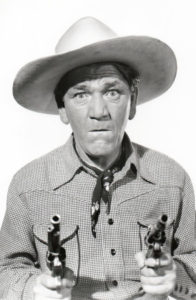 Shemp, the one Stooge that could be termed “multi-talented”, had a career beyond 19 minute slapstick shorts including roles in more serious-minded films like Pittsburgh and The Strange Case of Dr. Rx along with memorable comic support in classics like The Bank Dick and Buck Privates.

Hyped (by his agent no less) as the “Ugliest Man in Hollywood”, Shemp’s solo work for White takes little advantage of his peculiar comic stylings, shoehorning him into standard issue vaudeville scenarios involving errant husbands and incompetent handymen.

Besser had a similarly wide ranging career away from the Stooges popping up most memorably as the demented man-child “Stinky” in the Abbott and Costello TV show. His and DeRita’s work with White are among the most dispiriting comedies ever put on celluloid. Thanks to White’s boorishness and a compulsive need to imitate himself (even down to the deco font used for the title cards), Shemp, Besser and DeRita are made to appear like the least funny humans in Hollywood. 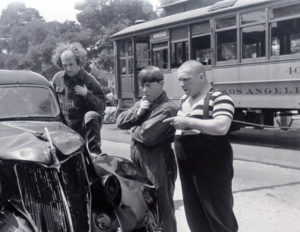 To Stooge fans, Time-Life’s collection is a treasure trove though most weekend warriors will be fine with the existing compilations that are better curated in terms of quality and historical importance (two phrases that don’t exactly trip off the tongue in relation to the Stooges). The dvds are crammed together in only three cases, an odd show of disrespect.

The transfers on these discs look… just fine. Would a Blu ray upgrade change our perceptions? Perhaps, in giving us a clearer window into the world the Stooges inhabited – the squat skylines, threadbare storefronts and vacant tracts of Los Angeles in the 30’s and the increasingly insular atmosphere of the 50’s shorts with their dependence on airless cookie-cutter studio sets. But the Stooges? They remain impervious to modern-day blandishments, digital or otherwise – knuckleheads in perpetuity. 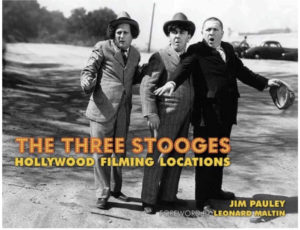 For actual historical significance, The Three Stooges: Hollywood Film Locations by Jim Pauley (with foreword from Leonard Maltin) is a fascinating tour of L.A. at a time when Stooges walked the earth.