Animal movies aren’t just for kids anymore, but nobody made one better than this French production, which stars a pair of talented Ursine thespians doing their thing amid more beautiful mountain scenery than seems decent. It’s guaranteed perfect ‘watch something with the kid’ material, and more than intelligent enough for consenting adult fans of the great outdoors. 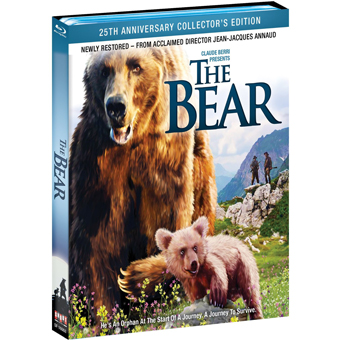 Jean-Jacques Annaud’s The Bear charmed big audiences of rowdy kids back in the day. I saw the phenomenon happen in Westwood, where about five hundred of them stopped giving their mothers and nannies grief and turned their entire attention to the screen. With what did they suddenly so strongly identify?  One fuzzy, slightly blue-shouldered bear cub, a vulnerable little spud with a big curiosity and a crybaby attitude to adversity. The animal movies of my childhood tended to be fun but sappy stories about horses (Misty, 1961) or fantasies about anthropomorphic proto- E.T.’s (Flipper, 1963). Disney 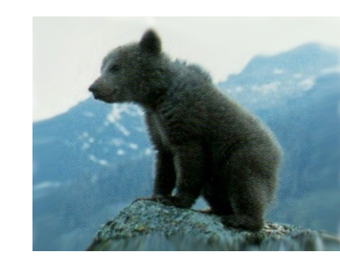 exploited every potentially cute animal on the planet, stopping short only before “Gut Eater, the mixed-up Hyena.” Since even Disney wasn’t above blatant fraud concerning nature facts (Lemmings a go-go), by the 1970s kids expected all warm mammals to love humans and befriend lonely children. Ivan Tors’ TV animals laughed along with humans by snorting, hopping up or down or flapping their flippers.

What is fascinating about Annaud’s The Bear is that its animals are given the dignity of being just plain ignorant animals, trying to get along the way God and Darwin made them. Things are harsh for those bears in the woods, but life isn’t easy for anybody else, either. Because The Bear is set in the past of the 1880s, the hardy frontiersmen we see are as sympathetic as the animals they’re trying to trap. The top-billed bears are genuine stars, performers with unique abilities. They’re trained, yet convince us that they’re behaving like wild animals.

A young, inexperienced bear cub (Youk) is orphaned when its mother digs at a beehive and brings a large rock down on herself. The cub wanders about, lost and miserable, encountering (and dreaming about) some frogs in a pond. He eventually finds a huge rogue male bear (Bart) but is not made welcome. Some hunters wound the bear, after which it and the relatively tiny cub become companions. An associate brings the hunters a pack of dogs, and the chase is on. Separated from his enormous protector and for a time captured by the hunters, the cub is then targeted by a hungry mountain lion. 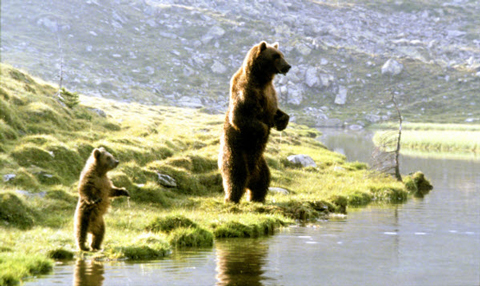 Fascinating from one end to the other, The Bear overcomes all resistance to its slow pace and refusal to play the ‘cute animal movie’ Game.  Instead of making this cute cub a party clown to entertain kids, Annaud pulls kids into the very wildness of the wild outdoors. The cub cries like a baby that likes affection but is basically selfish, which of course does make it seem human. It’s as playful as a child — we’re charmed to see it romp around a mountain meadow, swiping at butterflies. It feels miserable when it slips into a stream of ice-cold water. 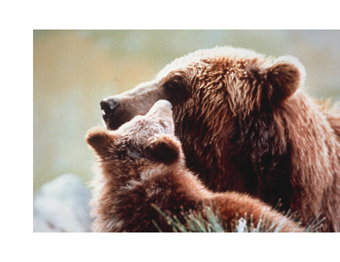 In interviews about The Bear, Annaud states right up front that a friendship between a cub and an adult male bear is unlikely but not impossible. We really did not want to see the big bear eat the little one, but our bonding with the animals is not exploited. We’re all too aware that those hunters can blast the big bear with their large bore rifles, and that the cub has no defense against a pack of hounds. The story has blood and death, and is not for really small kids incapable of handling scenes of dogs being splattered on rocks. Screenwriter Gérard Brach is most noted for films by Roman Polanski. He sets a tone that respects both men and animals. Director Annaud reaches for visuals that instill a reverence for the majesty of nature.

Equally fascinating is figuring out how the movie was filmed. The trained bears are in the high country of a distant location, meant to be North America but actually the Alps of Italy and Austria. Bart, an Alaskan brown bear, is an experienced trained movie animal, but not one to be treated casually — those huge paws are deadly. The two animals appear in many scenes together, but trickery is often employed to make them interact, most often out-of-focus foreground puppets. All those animal sounds are authentic, if carefully edited for maximum effect. The little cub’s pouting whines, whimpers and irate snorts are a riot. And when he falls on his face, the sound editors can’t resist punctuating the action with an appropriate ursine ‘oof.’ 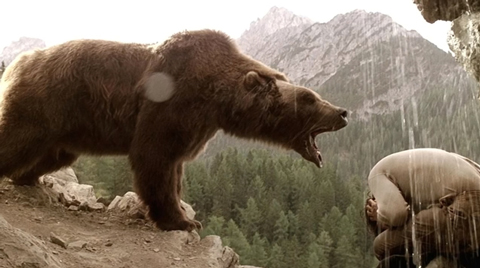 There are optical effects, but considering the style of the cinematography I’d be surprised to learn that split screens are used to a large extent. Annaud and Rousselot’s choice of angles in the exciting chase scenes generate a real spirit of adventure. Hey kids, life has its ups and downs. One day you’re romping in the clover, and the next a bunch of killer dogs have you cornered atop a craggy peak. You can hide or you can fight, but you can’t be passive about it.  It’s like Junior High School.

Elsewhere the tone is odd. The bear cub dream-hallucinates images of butterflies and frogs, represented by a stop-motion sequence from Czech animator Bretislav Pojar. This should break the no-anthropomorphisms rule, but director Annaud gets away with it. Perhaps the smartest thing about The Bear is that we aren’t told how to react to what we see, and nothing is explained verbally. The clever hunter (Tchéky Karyo) experiences a close call encounter with the giant bear, that no words could properly explain. No narrator intervenes to sketch out what’s before our eyes. This allows the parents of young children to fill in that role, if so desired. With a light snow falling, getting out of the cold and hibernating feels awfully cozy. Nobody can say if the bears will have a great time next year, or be turned into a pair of rugs. The unspoken lesson is that neither people nor animals are granted a guarantee of security, and we all have to take what comfort we can get. The Bear has no ulterior social agenda. It doesn’t teach the wrong lesson. It’s a good film for adults and children.

Shout! Factory’s 25th Anniversary Collector’s Edition Blu-ray of The Bear is a great encoding of this marvelous show. An earlier DVD was quite handsome but the HD resolution brings out all the richness in the Panavision images. The stereo sound is also fine. In some venues the film was released in 70mm, a format that by 1988 was beginning to disappear.

The film is accompanied by a 50-minute making-of documentary that will tell viewers everything they want to know about how to get two non-domesticated wild animals, one of them capable of ripping your head off, to perform so well on screen. Frankly, I’m surprised that old Bart didn’t take one look at the high mountains, and head off into the woods to do whatever bears do there. How would they stop him?  The docu gives us an interesting look at director Jean-Jacques Annaud, whose films run the gamut from science fiction (Quest for Fire, 1981) to soft-core colonial eroticism (The Lover, 1992 ) to glamorous battle action (Enemy at the Gates, 2001). He’s no slouch.

This release pretty much makes the older DVD expendable. I need to keep mine, because it’s the only record of a short featurette I edited for the film’s U.S. theatrical release. It and a similar promo for Sex, Lives and Videotape helped me win better trailer jobs after I left the Cannon Group. The best shot by far, used up front in the long docu, shows Youk the bear cub being carried around on a platter, like a little spoiled prince.