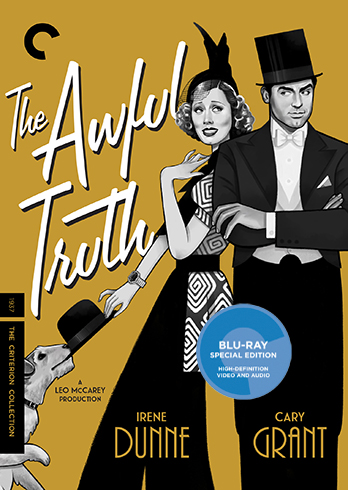 Thanks to Louis Armstrong and his fellow geniuses, the Jazz Age  transformed a generation and dominated pop culture for close to two decades; Vanity Fair  and Life recorded the nightlife of hot-to-trot sophisticates while early risers followed the seesaw romance of a willowy flapper named Blondie Boopadoop and her paramour Dagwood Bumstead, a lovesick Dick Powell wannabe.

It was Powell who helped popularize the uptempo rhythms pervading the fast and loose musicals of the era, in particular Paramount’s raucous output which flaunted hot jazz on the soundtrack whether it starred Crosby as a college crooner or W.C. Fields as a double-dealing misanthrope. Even Norman McLeod’s Alice In Wonderland began with a bouncy bit of swing time over the title cards. 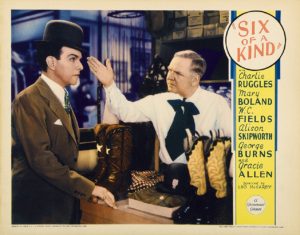 One of Paramount’s most reliable comedy directors was Leo McCarey, responsible for dizzy crowd-pleasers like Six of A Kind featuring Fields and The Milky Way starring Harold Lloyd. In 1933 he corralled the Marx Brothers for their anti-war masterpiece Duck Soup, in which Groucho’s motor-mouthed put-downs and Harpo’s slapstick exemplified the frenetic to and fro of screwball comedies.

McCarey, a frustrated songwriter himself, was hardly immune to the music that was agitating the airwaves. He would regularly hold cast readings while sitting at a piano, noodling the keys as his actors traded lines. It was a splendid way to introduce jazz-like improvisation into the mix, even to the point of discarding the script and directing performers to supply their own dialog. The method frustrated a by-the-book actor like Cary Grant but McCarey’s off-the-cuff inspirations helped transform the Hollywood icon from garden-variety matinee idol to world class comedian in 1937’s The Awful Truth.

With a screenplay by Viña Delmar (the mildly notorious author of 1928’s Bad Girl), The Awful Truth is the story of Jerry and Lucy Warriner, a nonchalantly wealthy duo who impulsively decide to split and immediately regret it.

The Warriners are the embodiment of Vanity Fair‘s nightclubbing swells; life is a 24-7 playground where even the specter of divorce holds the potential for more fun and games. This particular fantasy world, a never-never land free of responsibility and with money to burn, was intensely appealing to depression era audiences and who better to embody such storybook figures than Grant and Irene Dunne, two glamourous farceurs whose evening clothes were like a second skin.

Counting down the days to divorce court, Grant and Dunne find time to indulge in their own casual flirtations – chief among those distractions are furrowed-brow heiress Barbara Vance (a thankless role played by Molly Lamont) and human punching bag Dan Leeson, an oafish mother’s boy from Oklahoma perfectly inhabited by Ralph Bellamy (Bellamy manages to survive the film with a few granules of dignity intact, particularly when compared to his fate in His Girl Friday where Grant fillets him for 92 hilariously brutal minutes).

Though The Awful Truth was a significant blueprint for a hundred other comedies, it doesn’t reach the manic level of Bringing Up Baby or The Lady Eve – it’s a screwball comedy that really isn’t that screwy. Though Bellamy is brilliant in his country-bumpkin persona and Dunne has some truly inspired moments (especially in her musical interludes) this is the film that will be remembered as the moment Cary Grant became “Cary Grant”. 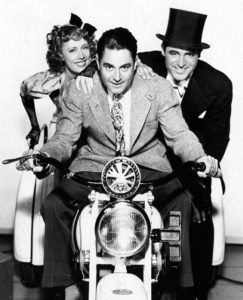 McCarey’s improvisational style was welcomed by Dunne but her leading man begged to differ – Grant wanted to quit the picture (or even switch roles with Bellamy, a sure sign of desperation.) According to jazz critic Gary Giddens, McCarey (who cut his teeth on silent comedy) encouraged the uneasy star to use his own innate physicality to, in Giddens’s words, “fill the frame.”  The trick worked and audiences remained glued to the sight for over two decades.

Giddens has more expert insight to share in the half hour interview included on Criterion’s terrific new blu ray edition of McCarey’s seminal comedy. Other extras include an audio interview with Dunne, a video essay by David Cairns, Tell Me Lies About Cary Grant, and the complete Lux Radio adaptation from 1939 starring Grant and Claudette Colbert.

Last and by no means least is a print essay by film critic Molly Haskell who graces the package with a lyrical appreciation of both McCarey’s career and The Awful Truth. Special thanks to Criterion for reaching out to such masters of their craft as Haskell and Giddens. More (much more), please.

You can find out more about Vanity Fair and Life Magazine artist John Held Jr. here. And The Comics Journal has a swell overview of Chic Young’s Blondie here.