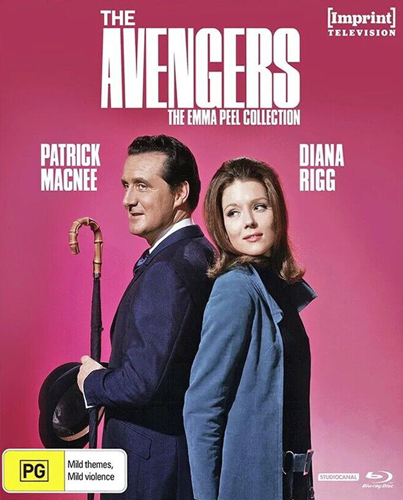 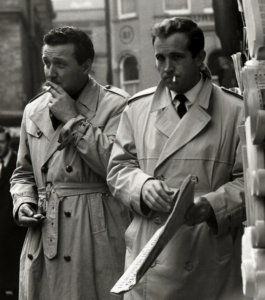 Though remembered for its idiosyncratic humor, The Avengers made its debut in 1961 as a no-nonsense crime drama. Ian Hendry starred as David Keel, a doctor turned detective, while Patrick MacNee haunted the sidelines as an inscrutable investigator named John Steed. Shot in black and white under grey English skies, the show was unmistakably a product of the Cold War, fueled by John Dankworth’s  stentorian theme and an origin story that predicted television’s noirish The Fugitive; Keel’s fiancée has been murdered, prompting our heroes to join in the search for her killer.

It was a brief sojourn for Hendry who left at the end of the season, relinquishing star billing to Macnee and his new partner, Honor Blackman. The plucky actress parachuted into the boy’s club as Cathy Gale, an adventurous anthropologist with a talent for judo, a taste for black leather, and in Blackman’s words, “… the first woman to fight back.” 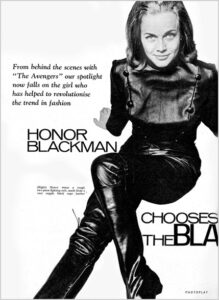 While Blackman was canoodling with Bond, the producers of The Avengers, Brian Clemens and Albert Fennell, searched for her replacement. They discovered her in Diana Rigg, a Shakespearean actress with a knack for adventure and a soft spot for champagne, the perfect partner for the devil-may-care Steed.

Over the next three years they conducted a romantic charade that might have been the real thing—a quasi love affair that made John Steed and Emma Peel the most charming light comedy team on television. [Imprint] Television, an Australian home video company, pays tribute to the magnificent Ms. Rigg in The Avengers: The Emma Peel Collection, a new Blu ray release featuring all of Mrs. Peel’s appearances in one expansive box set. 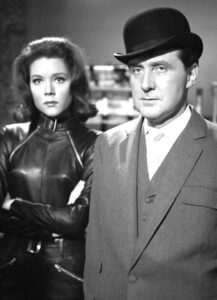 Though Rigg’s hold on most American fan boys and girls took root in the colorful episodes of 1967, the black and white shows first broadcast in Britain in 1965 more than held their own and in some ways were superior entertainment. Always a budget-conscious production even at its most popular (Rigg and Macnee were never happy with their salary—at one point Rigg was being paid less than the cameraman), those early shows thrived thanks to the star’s sparkling teamwork and the filmmakers who juggled the transition from hard-boiled spy thrillers to quirky fantasies about man-eating plants, trench-coated cyborgs, and unkillable zombies.

Britain has a tradition of television fantasy going back to 1938’s R.U.R., based on a science fiction play by Karel Čapek, and a 1949 adaption of the The Time Machine starring Russel Napier—so a band of uniquely qualified craftsmen was ready and waiting when The Avengers arrived—among them Roy Ward Baker, Sidney Hayers, and Charles Crichton. Baker turned 1967’s Quatermass and the Pit into a revelatory horror classic, Hayers’s sordid Circus of Horrors galvanized the drive-in crowd, and Crichton spearheaded one of Britain’s great farces, The Lavender Hill Mob. 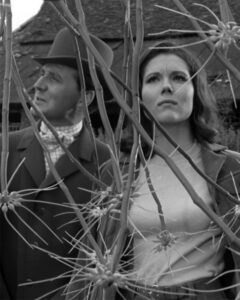 Producer, screenwriter, and occasional director Brian Clemens was invaluable in setting the show’s unpredictable tone—he even designed some of the sets. Cinematographers like Ernest Steward and Alan Hume helped steer the production through a weekly grind that had to reflect a rapidly changing culture—from the hard-nosed monochrome of 1965 to the pop art renaissance of 1967, they gave even the most impoverished settings a big screen luster. The Avengers’ greatest resource was their roster of crowd-pleasing actors, many of them made famous by Hammer Studios; Peter Cushing, Christopher Lee, Michael Gough, André Morell, and Andrew Keir.

Hayers helmed two of the more memorable entries during Rigg’s tenure, The Cybernauts (starring ace scenery-chewer Gough) and The Man-Eater of Surrey Green in which the director almost convinces us that a telepathic plant has cornered Steed and Emma in a leafy death trap. Crichton was in charge of five entries including 1966’s Death at Bargain Prices, a tidy thriller set in a department store with André Morell as a mad (nuclear) bomber and Diane Clare as a sales clerk (they were father and daughter in that year’s The Plague of the Zombies). 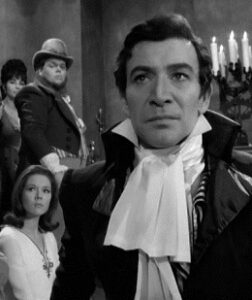 Directed by James Hill (A Study in Terror, Born Free) Castle De’ath offered a Scottish retreat for Steed and Peel—the castle-bound chiller starred The Curse of Frankenstein‘s Robert Urquhart as a Scottish lord with a busy torture chamber. Hill was also in the driver’s seat for one of the show’s most notorious episodes, A Touch of Brimstone, a provocative potboiler about Britain’s infamous Hellfire Club.

Written by Clemens, it’s the story of  a secret society dedicated to sin and all its permutations and it seemed tailor-made to push people’s buttons—or at least whip them into submission. Whichever it was, it succeeded in getting itself censored in future broadcasts. Peter Wyngard (the skeptical husband in Hayers’s Burn, Witch, Burn) starred as a sinister libertine out to dismantle the British government. The mood is mildly perverse with debauchery topping the menu and Emma Peel for dessert: Rigg’s appearance as “The Queen of Sin”–which required the game actress to don a skimpy bodysuit, spiky choker, and knee-high boots—scandalized the British dailies. 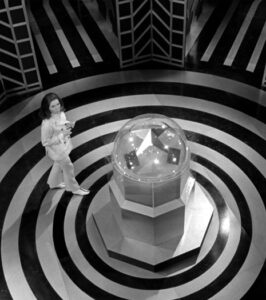 With twenty episodes under his belt, Don Leaver was The Avengers’ most prolific director—he was the prime architect of The House that Jack Built, a creepy, claustrophobic thriller produced early in 1966. One of Clemens’s most inventive screenplays, the story pits Emma against an old foe who also happens to be dead; this madman lives on via an “automated” house—a twisting, turning hall of mirrors meant to drive our girl mad. It’s a wonder it didn’t have the same effect on Leaver but he keeps the merry-go-round spinning smoothly—it’s a hallucinatory 52 minutes with echoes of The Lady from Shanghai and a nod to the trippy mind-games celebrated by the emerging counterculture. Steed and Peel became even more closely aligned with their flower-power fans the following year. 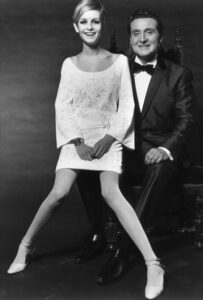 When ABC expressed interest in broadcasting the show in America, they had but one caveat, the next season must be produced in color (a new thing in British broadcasting). ITV was happy to comply and on Monday night, March 28, 1966, the show began its stateside run with Hayers’s The Cybernauts. Steed and Emma’s charm campaign had its desired effect on the Yanks and in 1967, the switch to color was in full effect; Steed’s Carnaby Street clothes and Peel’s multi-colored jumpsuits would put the duo at the forefront of the British Invasion alongside The Beatles, James Bond and Twiggy. 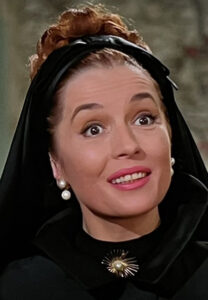 The premiere of this new-look Avengers boasted an enhanced title sequence, kicked off by Laurie Johnson’s theme, a brassy blend of John Barry and Henry Mancini. What followed was a jazzy montage of our heroes hard at play—their feet on the desk, champagne glasses already empty—all of it topped by a bit of nonchalant gunplay and a few karate chops.

That puckish intro signaled that the lightly satirical tone of the previous seasons had become full-fledged farce, the kind of absurdist comedy that Richard Lester mined in 1965’s Help—so it was fitting that Robert Day, director of The Green Man, a raucous black comedy starring Alastair Sim, did the honors for the show’s premiere, From Venus with Love. Though not strictly science-fiction, it sure looked like it; the story centered around a club of eccentric astronomers led by Hammer’s imperious scream queen Barbara Shelley. The real star was Wilkie Cooper’s ravishing photography (the great cameraman responsible for The Admirable Crichton and Jason and the Argonauts would lend his talent to four more episodes). 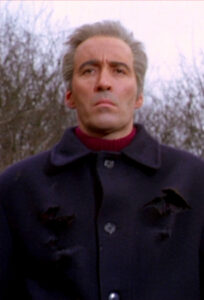 Day would return for five more equally eccentric send-ups, including The Fear Merchants, The See-Through Man, and one of Steed and Peel’s odder adventures, Never, Never, Say Die, starring an unstoppable Christopher Lee, unstoppable because—shades of Dracula—he won’t stay dead. Later that season the producers gave equal time to Dracula’s arch rival when Peter Cushing turned up in 1968’s The Return of the Cybernauts. Charles Tingwell (the harried inspector of Margaret Rutherford’s Marple movies) co-starred as a reluctant scientist terrorized by the revenge-minded Cushing.

In the spring of 1968, the party was over. On Wednesday, March 20, (September 25th in Britain) Emma Peel said goodbye to Steed, and to us, in The Forget-Me-Knot, in which Mrs. Peel returns to what we must presume to be a more respectable family life with her long-lost husband—what a fate! It was left to Linda Thorson to replace Rigg—impossible on the face of it. As Mrs. Peel motored away, it was little consolation that Mr. Peel bore more than a passing resemblance to the downcast Steed (after the show wrapped, MacNee confessed to weeping in his dressing room). 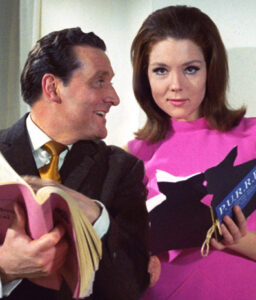 The bright colors of the fifth series had given the show a near psychedelic veneer but with that came an inescapably cartoonish quality, as if that other 60’s sensation, Batman, had taken over—with The Joker in charge of the scripts. If it seemed increasingly difficult for Rigg and Macnee to keep a straight face, I say go ahead and let them laugh—after all, it was their party, and it was a pleasure to be invited.

[Imprint] Television has done everything right with their Avengers set. Along with the superb transfers (the color episodes light up the sky), the extra material can be considered an embarrassment of riches.

The episodes are spread out over sixteen Blu ray discs and each show is accompanied by its own extras including audio commentaries and on-camera video interviews with directors, screenwriters and actors like Brian Clemens, Roy Ward Baker, and Peter Wyngarde. Also included is a raft of special productions, both archival documentaries and contemporaneous. The disc producers have also tracked down complete episodes of the original Avengers episodes starring Ian Hendry and Honor Blackman. Another rarity is an episode of Armchair Theatre, The Hothouse, starring Diana Rigg (the performance that led to her casting as Emma). 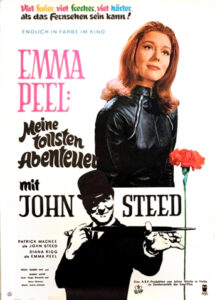 In Germany, The Avengers inspired a Beatleseque fanaticism. The show, edited down to 45 minutes per episode, was broadcast as Mit Schirm, Charme und Melone (loosely translated as With Umbrella, Charm, and Bowler Hat). In order to sate the hungry fan base a theatrical film was manufactured from two 1967 episodes, The f50,000 Breakfast and Murdersville, and titled, Emma Peel: Meine tollsten Abenteuer mit John Steed (Emma Peel: My biggest adventure with John Steed). Imprint has included the German trailer for that mash-up along with a charming if awkward interview conducted by Krimi star Joachim Fuchsberger (who’s compelled to translate their dialog in real time).

A complete rundown of the extras can be found at the [Imprint] website.

Books about The Avengers have become a cottage industry, including Marcus Hearn’s The Avengers: A Celebration: 50 Years of a Television Classic, Macnee’s own The Avengers and Me, and in particular Dave Rogers’s The Complete Avengers: The Full Story of Britain’s Smash Crime-Fighting Team!, a succinct guide to all things Avengers and a valuable reference for this review.