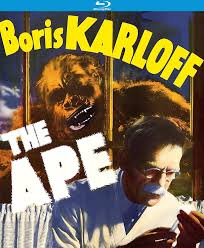 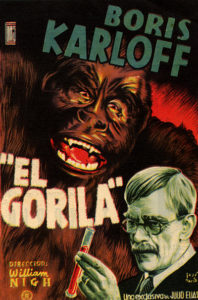 William Nigh directed over 40 silent films before he signed on for The Ape, which might account for this 1940 film looking far older than its release date—the staging is rudimentary and the dialog so simple that intertitles would convey the action with all its meaning intact. Curt Siodmak’s storyline could have been plucked from a different era too—in particular 1931’s City Lights in which a flower girl regains her sight thanks to Chaplin’s perennial outcast, the little tramp. In The Ape the misfit is Boris Karloff as a scientist who helps a lame girl to walk—and though this low budget melodrama can’t compete with Chaplin’s sentimental masterpiece, like many silent era films, it has its own unvarnished appeal. 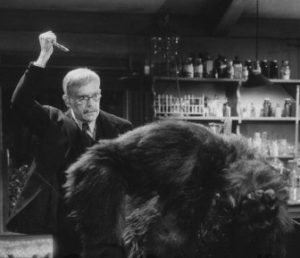 Karloff plays Dr. Adrian, a misanthrope who’s perfectly content to be shunned by the community—he’s the kind of deranged scientist typically found on the covers of Weird Tales—but Adrian’s goals are benevolent, not apocalyptic. He’s focused on one patient in particular—Frances Clifford, a wheelchair-bound beauty whose disability is a reminder of the doctor’s late daughter. Adrian needs spinal fluid to complete a cure and he finds it in an unlikely place: the mangled body of a circus trainer. The gorilla responsible for that assault serves another, even more sinister purpose; Adrian uses the simian’s skin as cover for murders of other, equally unwilling, donors. 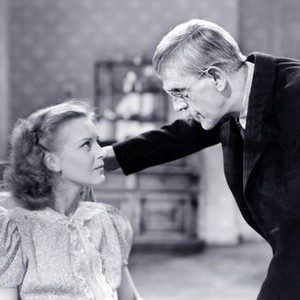 Did any great actor prop up more flea-bit productions than Boris Karloff? He was an artist whose ability to express pathos was nearly unequalled—his nakedly emotional portrayal of Frankenstein’s creation made Chaplin’s tearjerkers seem contrived. But Karloff’s turn in The Ape is a bit of a misfire—except for a bravura scene in which Karloff deftly dispatches the rampaging beast, the actor walks through an oddly colorless performance (the John Bolton mustache doesn’t help). Nevertheless, the film is given all the heart it needs by Maris Wrixon, the actress who plays Frances. Wrixon managed a career that spanned two decades where she often appeared in end credits as “girl”, “blonde”, “information girl”, or “autograph hound.” In Calling Philo Vance she was given something of a promotion as “long distance operator.” It’s safe to say she mainly played bit parts in B movies—a shame because her work in The Ape, so understated and engaging, suggests she was capable of more challenging roles. 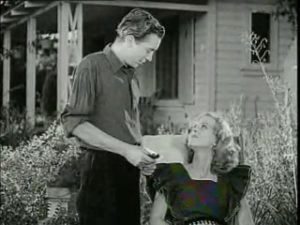 Though Brando had nothing to worry about, the rest of the cast acquits themselves quite nicely too, with Gene O’Donnell in what should be a thankless boyfriend part and Henry Hall as the sheriff in above his head—thanks to the efforts of Wrixon and co-stars, the audience can choose to reject or accept the preposterous premise and still enjoy Nigh and Siodmak’s handiwork. The Ape finds Siodmak at the beginning of his most fertile period with The Wolf Man, I Walked with a Zombie, Son of Dracula, and The Beast with Five Fingers still on the horizon. Nigh on the other hand was near the end of the line, wrapping his career with Stage Struck in 1948. Perhaps his “signature” film remains 1942’s The Strange Case of Doctor Rx—a low rung Universal horror embellished by an idiosyncratic cast including Lionel Atwill, Shemp Howard, and monkey shines courtesy of Ray “Crash” Corrigan as a gorilla—he performed similar duties for Nigh in The Ape.

Kino Lorber’s very fine new Blu ray might cause the movie community to revaluate The Ape—this is a Monogram picture to be sure—which means every penny-pitching production decision is under a high res microscope. But so is Harry Neumann’s cinematography which occasionally rises above the slapdash sets and ramshackle exteriors. Neumann began working in 1917 and by the time he hung up his shingle in 1958 he had racked up 345 films—his portfolio was a veritable encyclopedia of B films including The Mummy’s Tomb, The Maze, and The Bowery Boys Meet the Monsters. Along with that excellent transfer, Kino has not one but two feature length commentaries from Tom Weaver and Richard Harland Smith. They both approach the film from different angles and leave no gorilla suit unzipped, giving Nigh, Karloff, and “Crash” a thorough examination.