Remember those DVD collections organized by star, that combined favorite actors’ big movies with good titles you might not have seen?  Shout Select has gone that route in honor of the great Anne Bancroft, collecting eight titles in one box. They span the years 1952 to 1989 … and are sourced from multiple studios and disc boutiques. Eight, count ’em 8 — no dog-eared transfers, and one is even a fully-appointed Criterion disc. We’re told that Mel Brooks applied some of the clout that made this happen. 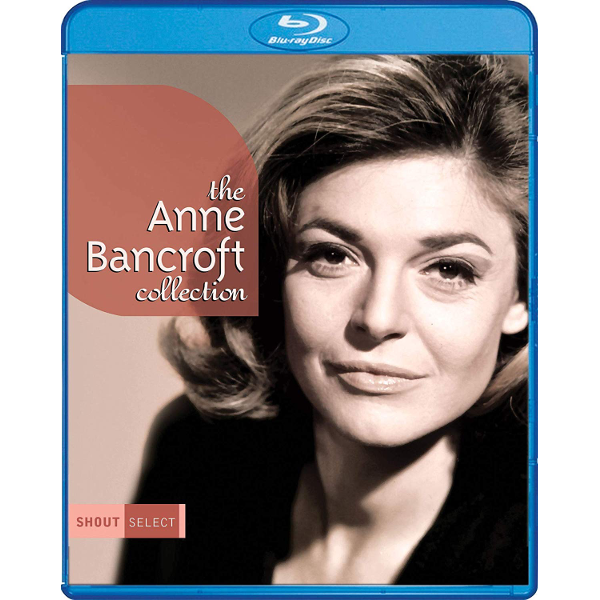 Fifteen years ago it must have been simple for Warner Home Video to assemble boxes of Bette Davis and Errol Flynn movies, as almost all of those actors’ older films were made by the same studio and controlled by the same rights-holders. That doesn’t work when an actors’ career is spread out over the map. And that’s what makes this new The Anne Bancroft Collection such a nice surprise: Shout Select has found eight full Bancroft features spanning 35 years, and licensed them from multiple rights-holders. It’s like different kinds of birds flocking together — there’s even a Criterion disc in the mix, with all of its extras intact.

Like all studios, 20th Fox kept a stable of starlets on hand. Ms. Bancroft certainly did better than most, although this collection spares us from things like Gorilla at Large, which is great fun but hardly a showcase for her talent. Cut loose from Fox, Bancroft enjoyed a colorful career that included some good films noir (New York Confidential, Nightfall) and highly-praised TV work. Although Hollywood initially used her as heroes’ girlfriends and generic frontier women, Bancroft always stood out. She was consistently memorable, in good dramas like Hugo Fregonese’s The Raid. Even her ordinary characters seemed intelligent, vital and alive, and frequently with a warm sense of humor.

The range of Bancroft pictures is impressive. This collection taps her Oscar-winning movie The Miracle Worker and three of the four features for which she earned well-deserved Academy nominations. Going through the filmography, some worthy Bancroft performances outside this collection are The Slender Thread (1965, Sydney Pollack),  7 Women (1966, John Ford), The Turning Point (1977, Herbert Ross), Garbo Talks (1984, Sidney Lumet) and ‘night, Mother (1986, Tom Moore). We eagerly note the stellar lineup of directors whose work benefited from Anne Bancroft’s presence. Represented here are Roy Ward Baker, Arthur Penn, Jack Clayton, Mike Nichols, Alan Johnson, Norman Jewison and David Hugh Jones. Bancroft was also directed by Anthony Mann, Richard Attenborough, Robert Wise and David Lynch. We know she was picky and shrewd with the roles she took. Her career received a boost in conjunction with her husband Mel Brooks, but one can’t say she ever took on a part better suited for somebody else.

1952’s Don’t Bother to Knock is an early-career Fox highlight. Anne Bancroft was billed below Marilyn Monroe, but was so good that she wasn’t ignored in the reviews. Her appearance might surprise viewers that only know her as Mrs. Robinson — she’s all of 21 or 22 years old here. The show is an offbeat suspense thriller and one of the better directing efforts by Roy Ward Baker (Inferno, A Night to Remember). The encoding includes an isolated score track; I reviewed a fine Twilight Time disc from 2018 at this link.

Next comes Bancroft’s 1962 triumph The Miracle Worker, with her Oscar-winning turn as Annie Sullivan, the teacher of the famed Helen Keller. It’s a movie one can re-view every few years, as it’s always like seeing it for the first time. For once a Broadway play adaptation kept its original cast — we wonder what Patty Duke would have been like in the role, on stage, three years younger than she is in the movie. The encoding on view is not just the same as for Olive Films’ excellent 2017 release — the disc is the exact same authoring, with a new label.

Jack Clayton’s Brit art picture The Pumpkin Eater is reviewed separately today, by Charlie Largent. For this show Bancroft took on a weighty Harold Pinter script, with uncommunicative characters fighting their way out of psychological stasis. Housewife Jo keeps having children, but her self-image is crushed when she finds that her husband (Peter Finch) is seeing other women. Maggie Smith and James Mason fill key roles. Clayton’s direction emphasizes social discomfort at parties and other awkward situations; the many close-ups and the unglamorous B&W cinematography communicates Jo’s feeling of social vulnerability. Bancroft won Best Actress at Cannes for this part.

The disc included of The Pumpkin Eater appears derived from a Powerhouse Indicator disc from 2017 — two featurette extras are included. Jeremy Mortimer on Penelope Mortimer the author is discussed by her son; and Dinah and Fergus is a conversation with the former child actors Frances White & Fergus McClelland.

Here’s a first, in terms of inter-company cooperation: the disc edition presented for Anne Bancroft’s most famous film The Graduate appears to be the Criterion release from 2016 — the label is different but the playback begins with the faint ‘C’ in the upper left hand corner. The list of extras also appears to match what I covered in my review: two commentaries, interviews with Lawrence Turman, Buck Henry, Dustin Hoffman, etc., featurettes Students of The Graduate, The Graduate at 25, TV appearances by Mike Nichols with Barbara Walters and Paul Simon with Dick Cavett; screen tests, etc.

We impressionable teenagers in 1967 thought The Graduate would become an all-time classic, but it seems somehow to have diminished into something less than that — the edgy satire and California-chic stylization isn’t as celebrated as it was when Dustin Hoffman was the reigning acting champ of the hour, and nobody questioned the profundity of the Simon & Garfunkel songs. It’s still a great picture, and Anne Bancroft’s character is the most original and daring of the ensemble.

There ‘always was an Anne Bancroft,’ but somewhere along the line we became aware that ‘Anna Louise Italiano’ had been married to ‘Melvin Kaminsky’ since 1964 — what a creative union that turned out to be. Mel Brooks’ Brooksfilms indeed gave Bancroft some great parts, and she earns her credit for her one feature- directing effort, 1980’s Fatso. It is reportedly also the first Brooksfilm picture, preceding The Elephant Man. Fatso was not consistently well received, with some critics opining that DeLuise’s starring debut didn’t come off — perhaps because the only message about obesity offered is that it doesn’t have to get in the way of a happy life. Anne Bancroft plays DeLuise’s sister, and Candice Azzara the nice girl Dom falls in love with.

Shout released the movie Fatso earlier this year, as a single. The disc appears to be the same, with a featurette discussion between Stuart Cornfeld and Mel Brooks, and an interview with a film historian, Maya Montañez Smukler.

Did Bancroft and Brooks ever perform together? The answer comes in 1983’s To Be or Not To Be, their big co-starring comedy vehicle. It’s a remake of the famed 1942 Ernst Lubitsch original and as such had difficulty attracting credit for its own merits. Like Brooks’ other ‘spoof’ comedies, most everything is Borscht-belt broad. The show is far removed from its original wartime context, when making Adolf Hitler jokes was an act of bravery. The weak update adds details like gay rights to the main issue, such as the annihilation of Jews. The supporting cast is strong, though: Charles Durning, José Ferrer, Christopher Lloyd. A re-formatted Fox disc, this comes with several featurettes including a trivia quiz and an isolated music track.

Columbia Pictures provides the collection’s final two pictures, presented in plain-wrap editions but beautifully mastered for HD. The sober 1985 drama Agnes of God is about a pregnancy in a convent, from the play by John Pielmeier. Anne Bancroft had to campaign for the part with director Norman Jewison, who wanted the actress from the stage, Geraldine Page. Bancroft is the Mother Superior and Jane Fonda the psychiatrist that try to get to the truth behind the claim of the young, disturbed Sister Agnes (Meg Tilly) that she’s undergone a virgin conception. Critics were divided on the picture, saying it didn’t fully engage with its touchy subject matter, but it earned Oscar nominations for Bancroft and Tilly, and the music by Georges Delerue.

The last show may be the biggest surprise for thoughtful viewers. 1987’s 84 Charing Cross Road, a real gem about an odd friendship conducted by mail between a nervy New York writer (Bancroft) and a fastidiously polite London bookseller (Anthony Hopkins). The source is a famous account by Helen Hanff detailing her experiences between 1949 and 1971. All that literally happens is that she orders books by mail, but the sweetness and delicacy of the correspondence is winning — we keep hoping this pair will get together, even though he is happily married (to Judi Dench) with two daughters. It’s one of Brooksfilm’s best efforts, with wonderful, understated evocations of the passing years in NYC and London. David Jones’s direction successfully breaks the fourth wall: the Bancroft and Hopkins characters sometimes talk to the camera — directly to each other — expressing the connection made in their letters. Shout Select’s Eight-title Blu-ray of The Anne Bancroft Collection presents each film on a separate disc. All can boast of sparkling transfers — this is not an excuse for studios to unload stocks of back-inventory editions. The playlist does indeed sketch out a good cross-section of Bancroft’s career — eight films out of her fifty-odd features.

Each disc carries a Shout Factory label, but a couple are identical encodings to earlier releases by other companies.

Don’t Bother to Knock is a pre-widescreen 1:37, The Graduate a Panavision 2:35, and the rest are cropped to widescreen 1:85. A twenty-page insert booklet has a full essay and liner notes descriptors for the eight features, written by Alicia Malone. A fat keep case carries all eight discs.

Strange corporate bedfellows: the logos printed on the box are a United Nations of disc producers: Shout Factory, 20th Fox, MGM, Columbia, Olive Films, Criterion, StudioCanal. I confirmed that Shout! Factory, formed in 2003, was created by the folks that ran Rhino Records — which I’ll never forget as the compilers of superb music collections on CD, pulled from wide sources instead of one label. I remember in particular their satisfying A Fistful Of Film Music: The Ennio Morricone Anthology. Rhino did the same for everything from classical obscurities to ‘Dr. Demento’- type novelty records.

Good for Mel Brooks and the memory of a great lady. Should Shout Select favor us with similar creative collage collections, I’ll be taking notice. Considering the rights-boundaries that are being crossed, many ideas seem possible. They could put out all three Hammer ‘Quatermass’ films, in one set. Do you think Mel Brooks might be a Quatermass fan?