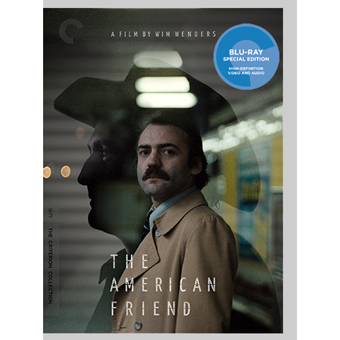 Fourteen years ago Anchor Bay released a Wim Wenders DVD collection with excellent extras provided by the director himself. Wenders is almost unique in that he owns almost all of his films and retains their film elements; it must give him great piece of mind to know that Warners could cut his Until the End of the World without doing any permanent damage. A festival of Wim Wenders pictures made the rounds last Fall. It looks as if his entire catalog — including the long version of End of the World — will be forthcoming from Criterion. 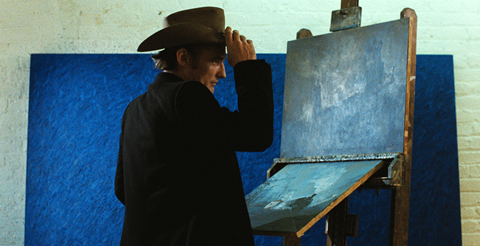 1977’s The American Friend did not boost Wenders from the festival mainstream to full American awareness, but it did set him up for a bad career move with Francis Ford Coppola. The big jump came when  Paris, Texas, and Wings of Desire raised the director to full visibility. The American Friend is a Deutsche mix of Wenders road picture and film noir situations, a satisfying crime/suspense thriller for thinking adults.

Wenders altered the novel by master suspense author Patricia Highsmith to fit his personal style. American Tom Ripley (Dennis Hopper) is a slightly unbalanced art fraud entrepreneur, selling the paintings of the ‘dead’ artist Derwatt (Nicholas Ray) at auction in Hamburg. But Derwatt is actually alive and well in New York, secretly cranking out priceless originals. Tom’s sometime pal, French mobster Raul Minot (Gérard Blain) needs some killing done. Together they approach art consultant/picture framer Jonathan Zimmermann (Bruno Ganz) for the work. The happily married Zimmermann only considers the offer when a new medical test reveals that his nagging blood condition has become critical. He begins a weird odyssey into murder and deceit — but also a new friendship. The capricious Ripley takes a strong liking to Jonathan, and on a European train trip, suddenly breaks with the plan to give him some help.

The American Friend shows Wim Wenders at his offbeat best, creating believable character interaction. The bad guys are sympathetic, even as they cruelly deceive our thoughtful, inoffensive hero. The beginning is much like many another Patricia Highsmith story. Instead of bumping feet accidentally, as in Strangers on a Train, the fates of Zimmermann and Ripley cross at an art auction house. Zimmermann’s offhand snub makes invisible sparks fly with the volatile American. It’s just enough to motivate Ripley to pull the meek German into his circle of jeopardy. Wenders’ adaptation also finds its own conclusion, dropping Highsmith’s bloodbath finale.

Highsmith’s serial character Tom Ripley was interpreted more faithfully in the famous films Purple Noon (1960) and its remake The Talented Mr. Ripley (1999). Dennis Hopper’s take goes in a wholly new direction.  This Ripley is older, more eccentric and happily ensconced in a lucrative racket. Hopper upholsters the part with bits of improvised business stolen from Easy Rider or invented on the spot. Tom seems lonely; he records his voice just to have someone to listen to. Although a very dangerous killer, he’s a soft touch for his more conniving pal Raoul Minot. 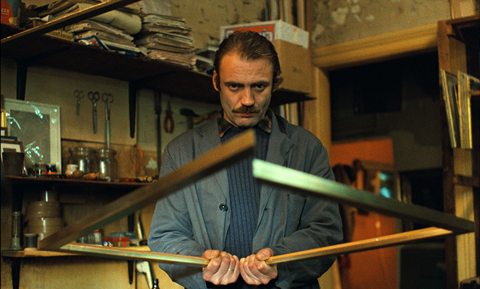 This is star Bruno Ganz’s first major film appearance. Wenders has Jonathan continually bump into things, as if he’s disoriented. His doctor tells him to avoid exertion, so we know that his health problem is real. Is the tension making Zimmermann absent-minded, or is his rare blood disease threatening to give him a stroke?  The kind of work Jonathan takes on for the gangsters would give anyone a heart attack. We understand when he tries to hide everything about it from his wife Marianne (played by Lisa Kreuzer of several of Wenders’ earlier road pictures).

Wenders’ camera prowls the creepy neo-noir underground passages of airports and train stations, and the antiseptic Paris Metro. New York is seen as a similarly lonely, ragged cityscape. Key scenes happen within view of each of the Statues of Liberty, the big one on Governor’s Island and the little one in the middle of the Seine. Jonathan’s Hamburg apartment is in a harbor area where entire blocks of buildings have been demolished. 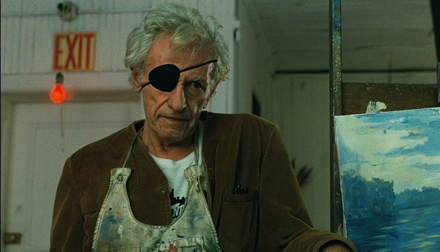 Wenders casts a fellow film director in every criminal or conspirator role. They’re even segregated in the final credit crawl. Alongside a number of European regissieurs, heavyweight legends Sam Fuller and Nicholas Ray carry key parts. Ray’s more substantial Derwatt seems to exist out there in some painter’s limbo, redoing his most famous work. When he alters his blues, the change is just enough for a sharp eye like Zimmermann’s to pick it out. Tired and sickly, Nick Ray is given an update of his famed ‘I’m a stranger here myself’ motto: “(If you) Close the doors, they’ll come in through the windows.”

Is it too obvious that the first time we see frame-maker Zimmermann, he’s ‘in a frame’ formed by a piece of his own handiwork?  Wenders takes pains to associate Jonathan with toys, optical illusions and proto-cinematic devices. He makes some of them for his son, and others to amuse himself. Ripley’s friendship is born with the gift of a little trick photo. Jonathan even makes a homemade wire garrote to use in the contracted train murder. 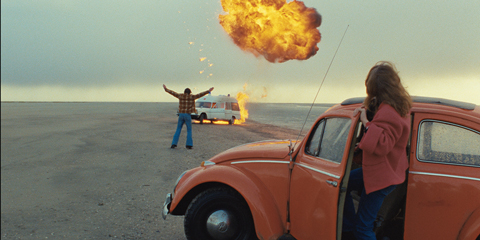 Noir tales often have complicated plotlines, but Wenders is much more into character. I don’t think we were meant to understand exactly why Raoul Minot wants to kill the gangsters, although we can assume that the Sam Fuller character comes after Tom and Jonathan to tidy up loose ends. No matter. Ripley’s strange relationship with Zimmermann is beyond simple explanations. If Ripley is meant to be homosexual, as in the earlier adaptations (along with Hitchcock’s Bruno, I guess) then we’re in ambiguous Joseph Conrad / Secret Sharer territory. We don’t expect any cheap character twists or reveals — the relationships are strange, but solid. Marianne Zimmermannn’s concern for her husband is never questioned. At the bitter end she’s actually quite the heroine, volunteering for hazardous duty.

Cameraman Robby Müller captures precise atmospheres and records worried-looking skies that help express Jonathan’s emotional state. The overland train murder scene was apparently filmed half on a real moving train, and half in a studio. The technical matching of rear-projected backgrounds is not what one would expect from a ‘New German’ filmmaker. The final scene employs a simple but risky-looking car stunt, a simple spinout more real than a dozen fancy stunts. It’s all done under one of those blistery, perfect-light early morning skies.

The final touch is the rich music score by Jürgen Knieper. Each return of the vivid guitar motif is a welcome surprise. In the next decade Wim Wenders will allow music to play a much greater role in his films. 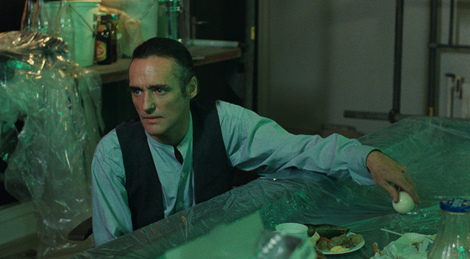 The Criterion Collection’s Blu-ray of The American Friend is a showcase for Robby Müller’s arresting camerawork. On the basis of this picture he was soon courted by top filmmakers: Peter Bogdanovich, Alex Cox, William Friedkin, Barbet Schroeder, Andrzej Wajda, Lars von Trier. As explained in the extras, Müller worked out a system of filming with fluorescent light, creating a realistic / stylized look that made him an idol of cinematographers everywhere.

Wenders and Dennis Hopper’s commentary is a repeat from the 2002 disc. The friends talk about the personalities in the film, but skip some of the personal issues between them. Wenders is mellow, with kind words for his collaborators. He offers tales of Nicholas Ray and especially Sam Fuller, who would regale the director for hours with original story ideas. Wenders recounts his own early doubts about whether or not he was cut out to be a filmmaker. Hopper is pleasantly serious and attentive throughout. He contributes an interesting tangential story about John Ford and John Huston, and acknowledges that Friend helped re-ignite his acting career. When Hopper ends by heaping praise on Wenders the director quietly quips that, “Together, we are the founding members of our mutual admiration society.”

New interviews with Wenders and Bruno Ganz give us a much deeper appreciation of who these men were and how their careers proceeded. Wenders says that Sam Fuller kept him from making a terrible mistake, by convincing him to not abandon a movie project. He remembers Hopper showing up late, in terrible shape from Apocalypse Now, and the first few days of filming being a disaster. Ganz talks about his transition from the stage to film.

Also from Wenders’ film vault is a lengthy series of original trims and outs, with his verbal comments. The deleted scenes give Marianne Zimmermann a profession of her own, but add no clarifications to the plot. The insert essay is by Francine Prose.