Martin Scorsese commands the screen without a single profane word or gunshot to the head. His adaptation of Edith Wharton’s 1920 novel is a marvel for its year, a highly entertaining, dramatically involving epic that takes us to a world lost to time, the high-toned society of New York in the 1870s. For adult viewers, Daniel Day-Lewis, Michelle Pfeiffer and Winona Ryder form a stunning romantic triangle. 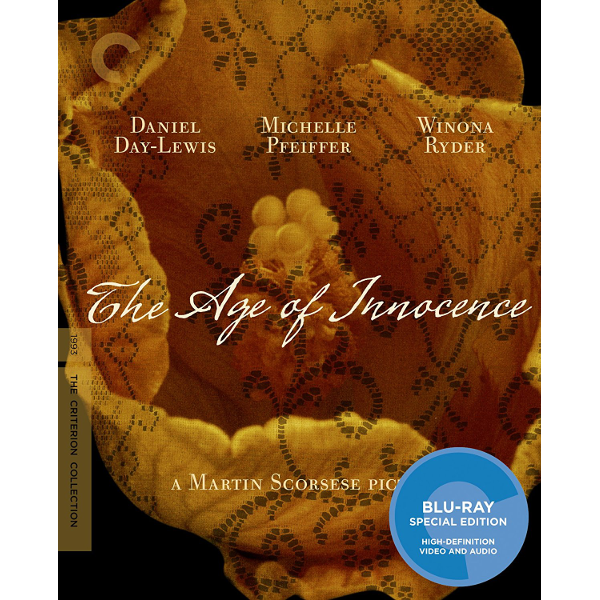 The whole point of ’60s and ’70s student filmmakers becoming top directors was to get away from the habits of old Hollywood, which included adapting period novels and turning them into (what we students thought were) stuffy movies starring Greer Garson. Well, the truth is that some of those Greer Garson pictures still play extremely well. Just as the French New Wave proposed to revolutionize film language, and then mostly reverted to old forms, the more commercial of the U.S. student hotshots simply turned around and gave the audience the old-fashioned matinee thrills they wanted all along. In 1993 Martin Scorsese made a picture far outside his established groove of intimidating violence and brutality. A period picture lavishly faithful to arcane modes and mores of New York in the 1870s, The Age of Innocence sticks to author Edith Wharton’s image of a rigid social order among the well-to-do, even going so far as to forego the conventions of romantic movies. Nobody makes movies anymore in which potential lovers lust and suffer from afar, without some kind of carnal payoff. That’s the brutality in Scorsese’s show . . . the harsh reality that confronts people that only think they can escape the conventions of their time.

As good costume pictures do, The Age of Innocence demonstrates that folks of other times, rich or poor, were just as tangled up in complicated relationships as we are now. The ‘plot’ of the story can be explained in just a few sentences. Attorney Newland Archer (Daniel Day-Lewis) is engaged to the lovely May Welland (Winona Ryder) but finds himself attracted to Countess Ellen Olenska (Michelle Pfeiffer), a relative of May’s that has fled a failed marriage to a titled European. It takes a concerted effort by Archer to help Ellen be accepted by the discriminating bluenoses of a society that values scandal-free stability over all other considerations. Newland plays by the rules, even as he’s appalled by the cruel snobbery exhibited by some of his otherwise reasonable peers. His inner rebellion draws him closer to Ellen, even as he goes through with his marriage to May.

The storyline is simple enough, but the adaptation of Jay Cocks and director Scorsese takes on a larger challenge, to confront the viewer with a social world run by wholly different rules. In escapist fiction there’s always a rebel that flaunts convention, uncovers hypocrisy and still ends up on top. With some novels, the hero or heroine remains faithful to a higher standard of behavior, endures some suffering and comes out at the finish rewarded for their superior values.

We’re first immersed in a New York that’s a foreign country. In 1870 many streets are unpaved and blocks undeveloped. The wealthy social set live in a propertied bubble of privilege, tended to by servants and transported everywhere in personal carriages. Messages, invitations and love notes are written by hand and sent by messenger. All of the city’s fine arts, theater and opera exist to entertain this moneyed elite.

As Ellen observes, the high social strata of New York is un-American in that it has imported European class distinctions, without the accompanying flexibility. A cultured lifestyle and the appearance of carefree opulence are everything. Men purchase flowers for their sweethearts every day. The walls of houses and apartments are covered with fine paintings. Men go to London for acceptable clothing; women import Parisian fashions but must be careful about ‘wearing them too soon’ so as not to appear too radical. Michael Ballhaus’s Super-35 camera takes special care to document incredibly fine table arrangements and place settings, and the amazing feasts being served, course by course. A top hostess, planning a party, chooses between the scores of silverware patterns she owns, out of a personal catalog. One of the more outspoken gentlemen has appointed himself a judge of manners, while another keeps (and revises) the official history of the city’s top families.

Newland Archer is surrounded by a large number of characters, some of whom seem innocent and idealistic and others that play along with whatever hypocrisies suit their personal fortunes. Still others seem like potential villains. A pair of waspish culture watchdogs (Richard E. Grant & Alec McCowen) ruin reputations by airing cruel gossip in ‘smoker’ gatherings. The women of both May’s and Newland’s families don’t mind airing their narrow prejudices. May’s grandmother Mrs. Mingott (Miriam Margolyes) helps smooth the way for Ellen but senses that Newland’s affections are wandering. Although a successful banker (Stuart Wilson) carries on an open affair while married, he is socially accepted because most of the families have invested their money with him. He actively pursues Ellen, trying to have an affair with her as well. One gets the feeling that, as in the old tune September Song, ardent swains hope to wear down their female targets simply by being persistent, even if a seduction takes years.

Occasional narration (by Joanne Woodward) of Wharton’s prose explains the strange social psychology at work. All are scrupulously, politely sincere in person or on paper, while cruelly conservative gossip controls who is acceptable and who is not. As Woodward’s voiceover intones, a single whisper can render an offender persona non grata. When Countess Olenska’s relatives throw a party to present her to society, rumors of past marital cheating ensure that almost every invitation is returned, ‘with regrets.’ Newland must appeal to the lofty van der Luydens (Michael Gough & Alexis Smith) to get the mortal snub reversed. Ellen is continually made aware, always indirectly, that her behavior is scandalous. Her dresses are unaccountably condemned as in terrible taste. At a party, she walks across a room to sit with a man, which is considered unforgivable. The real problem is that Ellen is an experienced, unattached and independent woman — not under the ‘safe’ control of some man.

Almost because of this social quicksand, the honest Newland Archer finds Ellen attractive. She has an open mind and questions things much as he does. She actually makes him laugh. By contrast, Newland finds the adorable May limited in her needs and desires, and pleasantly shallow. That May accepts without question the validity of the social rules, is a quality highly valued by their peers. At first Newland feels that the way out of danger is to marry soon, but May is the one to insist on a lengthy engagement. This arrangement becomes a recipe for a disaster that is postponed only by Ellen and Newland’s self-control and discretion. Although both know exactly how they feel about each other, they also know how to avoid temptation, and are especially careful not to broadcast their attraction to the gossip underground.

The story becomes a painful series of near- amorous encounters that almost occur. Ellen and Newland’s attraction is not frustrated by arbitrary events, but by their own shifting commitment to responsible behavior and ‘doing the right thing.’ Thus the movie becomes a meditation on life’s opportunities missed, or alternately, terrible paths narrowly avoided. For Newland, the final assessment is a particularly critical blow. He was far from cognizant of everything going on around him, and he sorely underestimated the depth and wisdom of his beloved May.

For a couple of decades Martin Scorsese was one of the few American directors empowered to choose and develop his projects like an old-fashioned auteur. In the case of this film his good judgment and taste — especially his choice of collaborators — give us a refined and classy but also emotionally compelling drama. The treatment flatters the audience, with no effort made to modernize the material, to make it more accessible. In his new interview Scorsese doesn’t identify himself as real connoisseur of fine art, such as the opera glimpsed in the movie. But he is sensitive to the nuances of character interaction that become The Age of Innocence’s real subject matter. By the second scene we’re reading every face we see, looking for additional meaning beyond the words they say. We’re soon picking up on minute details of Ellen and Newland’s body language. Scorsese also says that he realized that studio executives assessing Age’s commercial prospects must have been equally frustrated by the film’s lack of sexual release. A heavy-breathing romance where nobody sleeps together was unheard of. The married stars of the next year’s The Getaway practically had real sex on camera, in close-up.

Some of Scorsese’s visual transitions and effects make it look as if he’s trying to channel the expressive tricks of his idol, Michael Powell. Fades to colors instead of black work well only once, when a fade to red is partially achieved with colored lights on the set. Some trick flicker images when opera glasses are panning across a crowded opera hall are distracting. Scorsese clues us to ‘important memory moments that will haunt Newland forever’ by suddenly giving us three shots in a row, dissolving together. These don’t hurt, but they feel like unnecessary emphasis. On the other hand, Scorsese pulls off some screen masking and iris effects that play very well. And the picture’s matte painting effects are terrific as well, especially a stunning scene by a riverbank at sunset (top picture, above).

The actors and Scorsese’s direction of them cannot be faulted. Daniel Day-Lewis and Michelle Pfeiffer seize our attention at all times, while Winona Ryder does wonderful things with a very difficult role. She won the film’s only Academy nomination for acting. The smaller character parts are quite precisely drawn, with Alec McCowen, Geraldine Chaplin, Stuart Wilson, Miriam Margolyes, Norman Lloyd and Jonathan Pryce scoring as standouts. We’re happy to see Michael Gough in such a pleasing role, and then surprised to find out that his wife is played by none other than Alexis Smith.

The Criterion Collection’s Blu-ray of The Age of Innocence is a beautiful sight, starting right off the top with the main titles created by Elaine and Saul Bass. The textures of the age predominate: fabrics, lace, wood, the silver of fancy cigarette holders and cigar snips. These rich New Yorkers spent their money on the things everybody else needs, but at a level of quality that made every personal possession a work of art. The attention to the costumes so lovingly photographed is more than just for show — we don’t envy these people the hours of each day that must be devoted to dressing and grooming.

Criterion gives us just the extras we want. Martin Scorsese’s interview takes him out of Film Historian mode, and we discover how candid and honest he is when evaluating his own work. He has nothing to apologize for here — his movie may not be in the masterpiece category of his worshipped Luchino Visconti, but it’s no mean achievement. Co-screenwriter Jay Cocks (The Gangs of New York) also sounds sincere as he describes the working conditions on Age as ideal. We’re also given interviews with Gabriella Pesucci, who won the film’s only Oscar for costume design, and production designer Dante Ferretti. A half-hour promotional making-of show from 1993 contains a great deal of behind-the-scenes footage. Geoffrey O’Brien handles the text essay in the insert booklet.