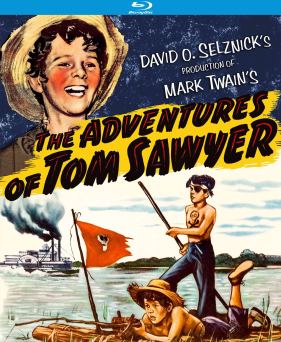 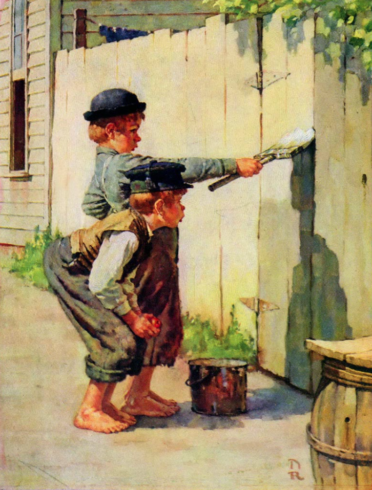 Though Hemingway suggested “all modern American literature” comes from Huckleberry Finn, a case could be made for The Adventures of Tom Sawyer as the great American campfire tale.

David Selznick’s picaresque film version of Mark Twain’s bucolic farce plays out through the producer’s rose-colored glasses – an elegy to “the beautiful past, the dear and lamented past.” The brisk adaptation by screenwriter John Weaver (only 91 minutes) is a laundry list of Tom’s greatest hits – his graveyard vigil with Huck Finn, the pirate escapade, the hair-raising cavern finale – all are adventures ingrained in the collective unconscious of most sentient human beings – even those who never cracked a book.

Directed by Norman Taurog, a man who specialized in the kind of uncomplicated entertainment usually described as “breezy”, and photographed in delicate Technicolor tones by James Wong Howe, Selznick’s pastoral comedy is nothing if not cheerful – but it was produced under a cloud of backstage drama and the fussy Selznick, no surprise, was the instigator for most of it. 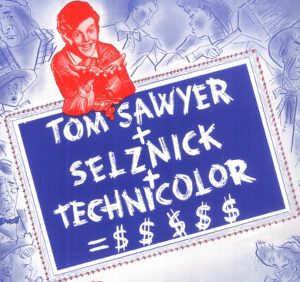 The dysfunctional production was chaperoned by as many directors as The Wizard of Oz – including William Wellman, George Cukor and H.C. Potter – and endured an everchanging cast list running through three Aunt Pollys, two Huck Finns and two Tom Sawyers. Howe himself engaged in daily skirmishes with Technicolor cameraman Wilfred Cline (the cinematographer was aiming for a subtle palette) and didn’t make another color film till 1950’s The Eagle and the Hawk.

Cooler heads prevailed and The Adventures of Tom Sawyer arrived in 1938 with Tommy Kelly as Tom, May Robson as his perpetually disappointed Aunt Polly, Marcia Mae Jones as his serenely beautiful cousin Mary, David Jones as his mealy-mouthed half-brother Sid and Ann Gillis as the sweet but high-strung Becky Thatcher.

A vivid supporting cast, including Olin Howland as the sadistic schoolmaster, Walter Brennan as the addlepated Muff Potter and Victor Jory as the demonic Injun Joe, personified the notion of “local color”.

The newcomer Kelly, freckle-faced and not “too” innocent, is a reasonable incarnation of Twain’s Everyboy – a barefoot con man, hooky-playing vagrant, habitual liar and determinedly unpolished apple of Aunt Polly’s eye. 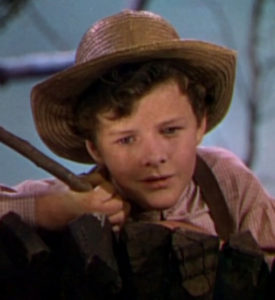 Tom’s rascally ways don’t interfere with his kindly nature – his best friend is Huck Finn, the town’s untamed outcast, and it’s their uncanny ability to be in the wrong place at the wrong time that put them at the scene of a graveside murder. The grisly spectacle sets the plot in motion and leads to a terrifying underground pursuit leaving both Tom and Huck hometown heroes and abruptly wealthy.

Selznick naturally availed himself of Hollywood’s finest when it came to his crew, bringing in heavy hitters like Kong composer Max Steiner for the soundtrack and the brilliant Walter Plunkett (running the gamut from Forbidden Planet to King Solomon’s Mines) as the costume designer – even with all this firepower the film is almost excessively modest in its demeanor, sometimes resembling a beautifully photographed Our Gang short (that is not a bad thing).

Selznick’s greatest inspiration was in recruiting William Cameron Menzies as storyboard artist and unofficial director of the film’s climatic cave sequence. The longtime production designer’s hand is obvious in the stark imagery of the boneyard murder with the dastardly deed playing out in silhouette atop a craggy hilltop – but Menzies’ coup de grâce is the heart-stopping pursuit through the cavern up and down the perilously steep walls and bottomless pits – it’s the very definition of a cliffhanger.

Though much of Twain’s more acerbic humor is missing, the film ends in shockingly funny fashion as Aunt Polly unleashes a devastating, and well-deserved, right hook – a moment that inspires spit-takes and belly laughs to this day.

Fans of this enormously charming brand of nostalgia – the yearning for what never was – have long hankered for Tom’s exploits to find a proper presentation on home video. It was worth the wait – Kino Lorber’s new Blu ray release is a beauty – the transfer of Howe’s exquisite work is sublime, revealing (at last) the remarkable details in clothing, set design and every knick knack on the Sawyer family mantle. 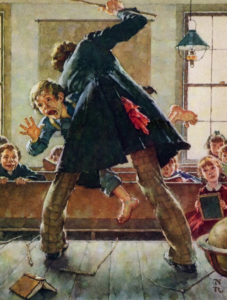 There are no extras but the disc includes includes both the original 91-minute cut and the 77-minute reissue.

The above painting of Tom whitewashing the fence (and hoodwinking his friends) and the schoolroom scene to the left are by Norman Rockwell from the 1936 edition of the Twain classic. More can be found here.