Watch out – a bloodsucking fiend is stalking the highways and by-ways of lower Manhattan… and she has a PhD!  Abel Ferrara’s vampire mini-epic puts Lili Taylor through an ordeal that’s harrowing, transformational and either profound or pretentious depending on how you roll with existential philosophy. We acknowledge that Ferrara is a good judge of actor-flesh: sharing in the theory-speak and blood-soaked grue are Christopher Walken, Annabella Sciorra, Edie Falco, and Kathryn Erbe. 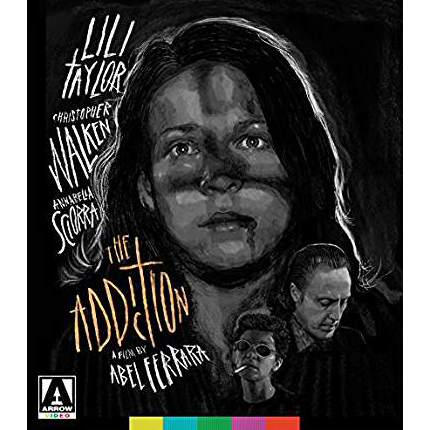 By the time Abel Ferrara’s The Addiction came along, Manhattan museums were holding retrospectives of the Bronx-born director’s work. Ferrara missed the mark in his unnecessary Sci-fi retread Body Snatchers but for my money hits a bulls-eye here. Several fine actors led by the utterly committed Lili Taylor bring a vampire fantasy to life and keep it alive through some pretty rough ‘philosophical’ passages. Several of Ferrara’s actors have gone on to high-visibility careers, which speaks to his reputation as an independent filmmaker that actors like to work with — it doesn’t hurt to be associated with success.

Ferrara certainly gives the vampire film a run for its money. The genre lore in this picture is fairly standard, but the underpinnings are unique. I imagine that plenty of essayists have related the director’s Catholic sensibilities to the philosophy behind this bloodsucker’s personal motivation.

The actual screenwriter Nicholas St. John needs to be given credit up front. He wrote the Ferrara pictures I like the most, and he gives The Addiction a open vein of philosophical double-talk that’s frequently worth listening to.

Doctor of Philosophy candidate Kathleen Conklin (Lili Taylor) lives in libraries, conversing only with her associate, fellow student Jean (Edie Falco). Her cellar apartment is just off of Washington Square. The academic focus is currently on genocide and other inhumane human activities that bring into question the notion of evil. Kathleen is disconcerted and troubled about this when she’s attacked on a street corner by Casanova (Annabella Sciorra), a short-coiffed woman in a swanky gown who is nevertheless extremely powerful. Bitten on the neck, Kathleen’s trauma subsides and then comes back in a new form, her own hunger for human blood. She’s soon attacking victims left and right. Her promiscuous street predations are mounting when a potential victim turns out to be a much more experienced vampire, Peina (Christopher Walken). He takes her back to his lodging to try to teach her a few things about surviving. Having plumbed the real meaning of existence, Kathleen wants to die but realizes that her undead status is going to make that very difficult. She embarks on a course of events that will give her more than one kind of satisfaction.

In the disc extras some of the filmmakers talk about their own history with substance and alcohol abuse, but The Addiction soon moves beyond a drugs/blood metaphor. The film’s various speeches about the nature of evil are pretentious yet highly appropriate — Kathleen’s leap-frogs mere nit-picking about good and evil when she physically experiences the imperative of hunger. As Lili Taylor explains in an interview extra, lions eating their prey aren’t concerned about morality, codes of conduct or their immortal souls. Predators aren’t evil, they’re just a part of nature. Kathleen’s eventual thirst-influenced philosophy concludes that Man is not tempted by Evil, but that Evil has always resided in Man as part of his basic nature. Illiterate brigands realize this — remember what the bandit Calvera said in The Magnificent Seven: “If God did not want them sheared he would not have made them sheep.” The world’s rich minority certainly follows this philosophy, for money and sometimes blood as well.

The vampire Casanova uses a verbal ritual when she savages her victims. Much like Travis Bickle asking, “Are you talking to me?” Casanova taunts Kathleen, entreating her to tell her attacker to go away, to demand that she goes away. Most victims instead cower and beg, which in Vicious Predator-ese translates to ‘Kill me, I’m weak and worthless.’ Casanova calls Kathleen a collaborator in her own victimization: those that wish to survive cannot surrender. When Kathleen goes on the prowl she adapts this philosophy to her attacks as well. For her it explains the psychology of mass murder, blaming the victim for their own victim-hood the way Calvera dismisses his victims as sheep. It’s Manifest Destiny or voluntad imperativa — a horrendous crime is its own justification.

Kathleen-the-vampire has a Catholic background, and she eventually uses that to achieve one of her ends. She’s able to apply her raised consciousness regarding her new blood-soaked lifestyle to her doctoral exams. As if blessed with powers to exterminate the lesser minds about her, she then does what graduate students everywhere secretly dream of doing. Who says grungy ’90s horror pictures can’t be emotionally satisfying?

Grungy isn’t the right word, for The Addiction is a sharp-looking picture, about a million miles away from the ping-pong granularity of Ferrara’s early 16mm-shot The Driller Killer. The excellent direction concentrates on performance and mood; the soundtrack is laced with rap music that serves to suggest the world on the streets, where Kathleen finds most of her victims. Yes, an Abel Ferrara picture has beautiful images. Studying Lili Taylor’s expressive face is rewarding for this viewer; I find her sympathetic even when she’s knee-deep in gore and writhing in the joy of bloodlust. Although she rattles off Kathleen’s philosophical arguments with elan, much of Taylor’s performance is silent mime, as was Sally Hawkins in last year’s The Shape of Water. I personally fell under Lili Taylor’s acting spell in the oddball independent picture Household Saints from 1993.

Christopher Walken’s brief appearance contributes a needed context to the ‘vampire setup’ being proposed. The only question we have is, if the ghouls proliferate at the rate we see, one would think that in just a matter of months the entire population of America would be transformed into hungry hungry hippo vampires. Walken’s Peina may have learned to curb his appetite, but Kathleen’s been in business just a few weeks, and she’s already got a couple-dozen newbie vampires under her direction.

As an unofficial student of vampire film experts Alain Silver and James Ursini (I proofread a number of their books) I personally found little of interest in most vampire pictures post- 1980. I don’t think I would have seen this one on my own, because I’m also not keen to take in all of director Ferrara’s work. But The Addiction is as good to see as it is to read about in a roundup of neo-vamp offerings.

Ah, don’t forget the Catholic symbolism, thesis-writers. Kathleen finds her way free of the curse of the undead through means that would please Dr. Van Helsing, even if he didn’t realize he was being used. I don’t understand the (duality of?) the last scene, but who wants to split hairs when the movie works so well?  I did not leave this show disappointed or bored, as is the case with the majority of post-classic era horror pix. Now to track down a good copy of Ferrara’s Ms .45, to see if it holds up.

Arrow Video USA’s Blu-ray of The Addiction is a terrific encoding; Arrow produced the video and audio restoration in-house and the results are to be applauded. Reviewers in 1995 mentioned the bleak B&W photography, but that must have been a result of the release prints — the new transfer gives the show an attractive, sometimes sensational look, with sharp, often deep-focus night photography on the streets.

There’s nothing sloppy about the soundtrack either — Ferrara’s technical crew does fine work, and Joe Delia’s soundtrack score is rich and moody.

Ferrara is deeply embedded in the extras, several of which are interviews that he self- directed. In one we get lengthy and candid contributions by Lili Taylor and Christopher Walken, where they speak their minds on a number of topics. One extra simply shows Ferrara in 1994 holding court in his editing room, noting that the war crimes in Bosnia fit all too well into the section of his film where Kathleen watches images of historical atrocities.

Ferrara handles the commentary on his own, while Brad Stevens provides a non-director analysis of the movie. The insert booklet (32 pages) has an essay by Michael Ewins and a Ferrara interview by Paul Duane.