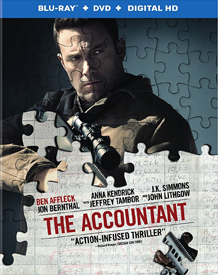 Comic book action thrillers are so influential today, that more naturalistic suspense thrillers are giving way under the strain. Just winding up is a long series of paternal revenge & response thrillers starring Liam Neeson, who is forever striking back against the ‘evil forces’ threatening the sacred family unit. No action hero ever fights for right for its own sake anymore, it’s always because of some heightened sense of family loyalty or personal duty – a ‘me’ motive. My theory is that nobody sees idealism functioning beyond the personal any more. Doing violence in the name of family absolves most anything… if you’re a leading character in modern heroic mode. 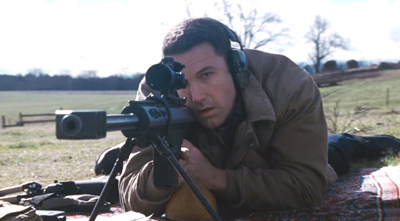 2016’s The Accountant is quite a concoction, a complex, well-made adult action-violence film with a character almost as stylized as a comic superhero — essentially, ‘Autism Man.’ A whirlwind of unlikely formative events creates a hero who is an Idiot Savant — a genius with numbers who can’t relate to people, yet is also an unstoppable fighting machine. This ‘unstoppable fighting machine’ BS delivers the exploitative action that audiences crave, and is therefore the modern fantasy that won’t go away. Writer Bill Dubuque’s clever screenplay works an intelligent variation on thrillers about corporate conspiracies and imaginary teams of ultra-sophisticated assassins. Director Gavin O’Connor, a fine cast and a very slick production do the rest — the show is easy to follow yet not too easy to predict. It’s entertaining.

Only a few years ago the film’s entire concept would be deemed to be in terrible taste. The fine actor Ben Affleck plays the lead character as a cross between Rain Man and The Terminator — I kept expecting him to say something like, “I’m a very good driver.” There’s also a comparison with TV’s Monk, where Tony Shalhoub played a detective beset with obsessive-compulsive disorder, who nevertheless is a crime-solving whiz. The whole idea sounds foolish, yet The Accountant stays serious and keeps its balance through good storytelling. It’s a comic book fantasy given a real-world polish. The hero makes lame excuses for his social awkwardness. He’s blunt and clumsy. He takes a sack lunch to million-dollar corporate business meetings. 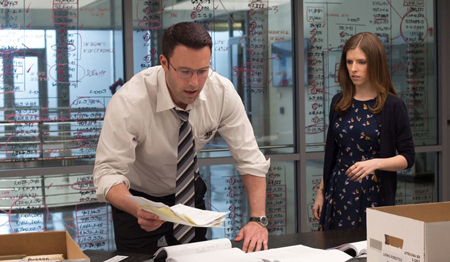 Here’s a very limited outline synopsis. Raised by a fanatic, demanding military father to compensate for his severe Autism, accountant Christian Wolff (Ben Affleck) went to prison for a tragic violent incident at his mother’s funeral. There Christian learned from ex- mob accountant Francis Silverberg (Jeffrey Tambor) how to survive while working for the Mob and big business, both of which routinely kill the accountants that help hide the billions in their crooked books. On release Christian set up a cover business as a strip mall accountant, to cover for the special, confidential jobs he performs for big-paying customers. Christian is all but invisible — his residence contains little of personal value, but he keeps a fancy Airstream trailer packed with priceless art, money, guns, and new identities so he can move on a moment’s notice. When Christian goes to work to find missing money on the books of Living Robotics, everything blows up. The owner (John Lithgow) and his sister/business partner (Jean Smart) seem sincerely upset when Christian’s scrutiny appear to trigger a suicide at the company. In actuality, a team of ruthless killers has been called in to clear up loose ends. Christian is targeted as well, but he’s so skilled at fighting and weaponry, and so brilliant in his combat strategy, that he invariably survives ambushes and slays all sent against him. In this case Christian Wolff flees with young Dana Cummings (Anna Kendrick) the Living Robotics staffer who originally detected the embezzled money. What Christian doesn’t know is that a major player in the high-level assassination game is someone from his past. That, and that the Feds are hot on his trail. The financial crimes director at the Treasury Department is Ray King (JR Simmons). He blackmails his own staffer, young analyst Marybeth Medina (Cynthia Addai-Robinson) into using her skills to identify and locate the mystery accountant caught in photos with important hoods and crooked financiers. 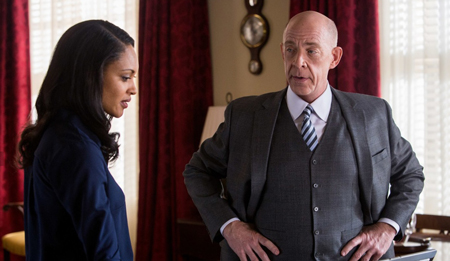 The Accountant is smartly written but made of very familiar elements. Christian Wolff has a ‘genesis back story’ not all that different from the Batman of Batman Begins — a broken family, intense & exotic training by a series of fanatics, and a final grooming to fit into a lucrative slot in the modern world of super business and super crime. Everybody needs Christian to solve their accounting problems, which, we’re told, usually results in the murder of both the embezzlers and the accountants that uncover their theft.

Unwelcome dramatic adage #1: Just remember that nobody ever dies accidentally in this world; they’re all being killed by shadowy conspirators.

Christian Wolff’s trailer is locked away in an ordinary storage unit. It’s basically his mobile Fortress of Solitude, and when he brings Dana Cummings there, she’s just like Vicki Vale being granted a tour of a superhero’s lair, The Batcave. Survivalists will love Christian’s preparations. When the Feds finally find his house, the rear woods entrance is covered with cameras and intrusion detectors. But nothing seems to guard the front entrance — until Ray King finds a military-grade mini-gun mounted in the garage.

This ‘Autistic Luke Skywalker’ hero has his own Darth Vader — a severe father who preaches a tough-love technique for survival in a tough world. Christian also has a Yoda — the old accountant who fled to the witness protection program, only to see the Feds abandon him to be tortured by the merciless Mob. 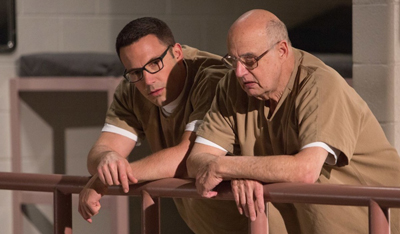 Unwelcome dramatic adage #2: Always preach the notion that the real world is more cruel and deadly than decent humans can possibly understand. It’s a wonder any of us can survive a single day out there. Modern action movies live on fear and paranoia.

Flashbacks to Wolff’s childhood show him at first severely incapable of functioning, a problem that carries into the present day. He hammers himself with exercise, loud music and self-beatings to maintain control over his malfunctioning brain. He goes nuts if he can’t finish what he starts — puzzles as a child, and the audit for Living Robotics. Christian has gotten himself out of a tight spot with The Mob by going on a one-man massacre attack. Slaughtering people is apparently distressing, even for Christian. During times of stress he mumbles a nursery rhyme to stay mentally on task. The rhyme is one clue that helps Marybeth Medina track him down.

Unwelcome dramatic adage #3: Audiences are not really disturbed by god-awful terror attacks as long as they happen somewhere else, to strangers. TV coverage of terror threats is just a new form of reality-show infotainment. A movie hero can now do exactly what a mass killer terrorist does, and the film will not considered socially irresponsible. 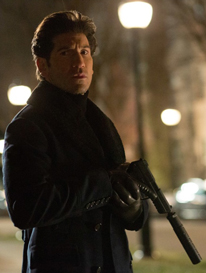 I enjoyed The Accountant quite a bit — just unraveling its neatly woven storyline was pleasurable. But right in its midsection is this hilariously pandering subplot. We see how the unemotional, robot-like Christian Wolff functions, and see that he’s made of Good Guy Right Stuff when he helps an adorable older farming couple who just can’t seem to make the mortgage and are in danger of losing the homestead. No, they aren’t named Joad. Just like in The Incredibles, Christian guides them into a way to game the tax system so they can stay afloat. They let him practice shooting on their rolling green acres until Evil Assassins show up to kill Christian, whereupon he performs one of his miraculously effective violent wipe-out attacks. He saves the old folks’ lives, and leaves them standing with the corpses. Now, even John Dillinger knew that he was risking the life of anybody he hung out with, but all Christian can say is, ‘I’m sorry.’ He then just drives off, leaving Mr. and Mrs. Farmer to dispose of the bodies!

Unwelcome dramatic adage #4: Your gun-crazy maniac killer hero is okay and hunky-dory, if he is friendly to the Forgotten Middle Americans that just need a break from all the modern madness.

So, I’ve critiqued The Accountant’s underpinnings, yet I have to say I found it entertaining. The fact that it’s not militantly stupid puts it several steps ahead of the competition. On the contrary, I found it well constructed. The characters are fun and interesting, with Affleck, Kendrick, J.K. Simmons, Addai-Robinson and Tambor all well acted and amusing. I thought that John Lithgow was a standout. Actor Jon Bernthal is also very good with a character I haven’t described, to avoid Spoiler issues. When the show requires tough talk the dialogue provided is pretty snappy. The ‘serious’ character speeches aren’t bad and the expository element is so well handled that I was never aware of being updated on the basic facts.

Although various people are shown using computers, they aren’t all-purpose Info Dump Boxes, that can pull facts out of the air whenever the storyline needs a jolt. I’m talking to you, NCIS, with its instantaneous ‘good hacking.’ ‘Good’ hacking is a myth, like James Bond’s License to Kill. Give a special agent the ability to kill anybody he wants and he’ll kill you too, stupid. Christian Wolff goes on the pile of fantasy heroes that unleash merciless violence, but be assured that it’s only against villains that really really deserve it. Step right up folks, no annoying moral issues here.

The film’s action direction is polished, if impersonal, and the slick images make the whole thing go down easy. Will there be an ‘Accountant Part Deux?’ If this isn’t a major stab at creating an action-violence-suspense franchise, ya fooled me. 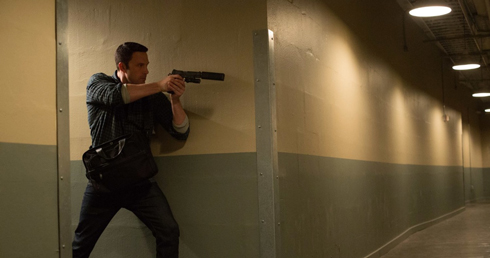 Warner Bros. Entertainment Inc.’s Blu-ray + DVD + Digital HD of The Accountant is the expected handsome encoding of this slick show, which came out last September and apparently did fairly well. Zero complaints for picture or audio — and the soundtrack dialogue is sufficiently distinct to make the subtitles unnecessary.

Promo featurettes are the key extras. One examines this new, ‘unique movie action hero.’ Behavorial Science explains how Christian Wolff’s characterization was kept in line with the reality of his condition. The Accountant in Action is a stunt and action breakdown. Codes are included to access a digital HD copy.

Yep, the time is ripe for great new movie heroes tailored for a new world of ADD-aware entertainment. How about a dental hygienist who also has a secret treasure trove of ancient Egyptian potions and poisons? Or a child torture victim, locked for twenty years in a dark room, who can mine coal so efficiently, that we can shut down all forms of clean energy harvest? Or how about a leader who can succeed without benefit of any knowledge or expertise whatsoever, who has no need of advice or counsel beyond his own selfish impulses?