Is it a modern classic? I think so. Lawrence Kasdan’s best movie embraces characters often lampooned or dismissed, or stereotyped as kooks — introverts, extroverts, people trying to make personal connections and those trying to avoid them. William Hurt finds his best role and Geena Davis won an Oscar for hers; thirty years later the entire cast feel like beloved friends. 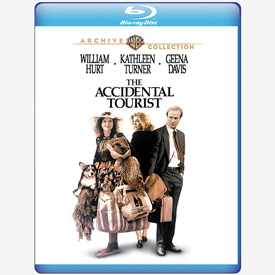 Some of my favorite movies are shows that I had to be dragged out of the house to see. I was carried away by the amazing characters of The Accidental Tourist, and left the theater feeling as if I knew them personally. Lawrence Kasdan’s picture is among the best of light romances, alongside movies that generate positive feelings about people. As highly accessible examples, Powell & Pressburger’s I Know Where I’m Going! and Wilder & Diamond’s The Apartment come to mind. Charming and funny, Tourist looks at the quiet introverts and sensitive souls that movies normally make fun of, and creates a drama that hooks us from the start.

This is by far Lawrence Kasdan’s best film as writer or director. His cast is superb, led by Geena Davis’ wonderful portrait of a slightly odd but warmly caring woman who takes on the job of breaking a good man out of a crippling emotional shell. The movie is consistently amusing but always serious.

The story takes its time to introduce its odd characters. Travel book writer Macon Leary (William Hurt) has descended into non-communicative isolation following the death of his son a year before. His wife Sarah (Kathleen Turner) leaves him, so Macon moves back in with his kindly but eccentric siblings, removing him even further from the need to live like a normal person, to engage with strangers. Enter dog trainer Muriel Pritchett (Geena Davis), a pushy, captivating oddball who sets her cap for Macon in an instant. Can she communicate with a man who shrinks from all interpersonal involvement, and has forgotten how to express his own feelings?

The Accidental Tourist has comedy, tragedy, kooky people, a slow pace and a dry sense of humor. Its main characters are over thirty and live quiet lives dealing with their problems and working to make ends meet. They try their best to be fair to each other. Nobody wears a sign reading ‘deserving hero’ or ‘meddling outsider.’ In other words, the emotional relationships in Anne Tyler’s original story acknowledge the complexities of real life. As we begin to understand these people, our reward is a heightened understanding and compassion. 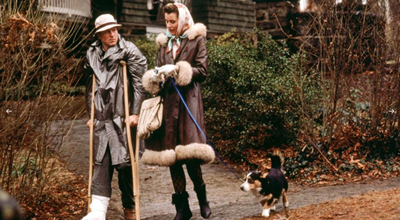 The amazing thing is how simply Kasdan’s show accomplishes this. We’re presented with some challenging characters, to say the least. Macon Leary begins as an insensate lump, functioning just well enough to write his little travel guides for people that don’t want to travel. Everything about Muriel Pritchett is forward, intrusive, and loud. She’s a true original character, bravely trying to make her way with an adventurous spirit and an unusual fashion sense. Her inquisitive impatience lets us know she needs to find the right person, right now. Viewers that prefer their characterizations broad and simple may become restless; Tourist requires a more inquisitive attitude.

For those of us that don’t lead hard-charging lives, The Accidental Tourist is a unique portrait of sensations that don’t show up in normal movies, the kind that make action heroes of accountants and clerks. When he’s alone, Macon Leary has serious motivation trouble. Just doing his chores becomes an exercise in deliberation and willpower. His wife Sarah overdoses on his emotional deadness; neither of them has recovered from the death of their son, a murder victim. Sarah leaves to try living alone, perhaps to see if Macon will snap back to life in her absence. He instead returns to his family home, retreating to an earlier life of acceptance and predictability. It’s a cozy but unhealthy place to be — one divorced sibling and two unmarried ones, all back together and feeding off one another’s collective eccentricities. 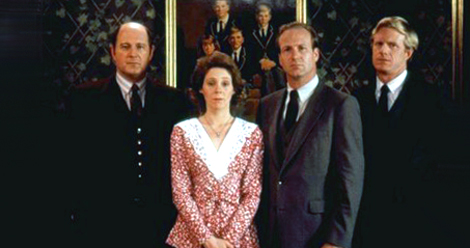 Sister Rose (Amy Wright) is an obsessive who derives pleasure from absurd over-organization; brothers Porter (David Ogden Stiers) and Charles (Ed Begley Jr.) are becoming functional zombies, living comatose lives where nothing changes and one’s most important task is to see that nothing ever does. When they decide the phone is a bother, they stop answering it. Macon’s new girlfriend Muriel and Rose’s new suitor Julian (Bill Pullman) are treated as intruders, unknown factors that might disturb the status quo.

The strength of Tourist is that it presents these amusing people as credible humans with sensitive personalities. Many would see Macon’s avoidance of people as rude and boorish, and Rose’s painful honesty (“You’re just trying to keep me from my last chance at love”) would certainly tag her as a social misfit. So thank heaven for the romantics that keep trying. Outsiders Muriel Pritchett and Julian both know what they want but must swim against a current of disapproval and rejection. It takes special sensitivities to communicate to such insular people, to break through emotional scar tissue and the mixed signals of apathy and distraction.

That The Accidental Tourist can maintain this intimate tone is a storytelling miracle; Tyler, Galati and Kasdan — and especially editrix Carol Littleton — make skilful use of amusing narrative devices. Macon’s adventure-killing travel advice is to avoid anything new or unpredictable, especially other humans. His defensive rules provide a wry counterpoint to ordinary scenes: “Don’t get attached to items you might find during your trip; think of how awkward and inconvenient they may become later on.” That Macon’s self-willed isolation is a nervous disorder becomes clear through his Corgi dog, Edward. A direct connection to the lost son, Edward senses Macon’s disharmony and starts biting people. 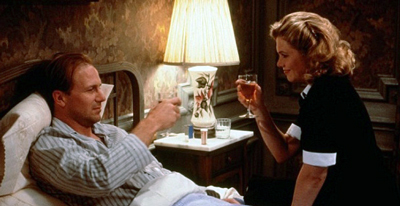 The intelligent and uncompromising William Hurt is marvelous as Macon, communicating depths of feeling with a minimum of actorly effects. His co-star from Kasdan’s Body Heat Kathleen Turner handles her problem role with equal sensitivity. Her Sarah is also disturbed, and is struggling to regain her self-possession the best way she knows how. Everyone in Tourist is accorded respect as an individual, with a life outside the confines of their individual character turn. The standout among the supporting cast may be Amy Wright, with her portrait of a woman that anywhere else would be caricatured as a fussy spinster. Ms. Wright can be seen in highly affecting roles in pictures as diverse as Breaking Away, Wise Blood and Inside Moves. With only a few moments on screen, she makes a strong impression in The Deer Hunter.

Geena Davis’s Oscar win was that rare exception when a perfectly realized film role is justly rewarded. Her Muriel Pritchett starts out as an angular oddity almost like Shelley Duvall’s Olive Oyl in Popeye. But Muriel has an understanding of unstable personalities, starting with Macon’s dog. She’s undeniably courageous, considering her determination to win over a man five steps removed from even considering her agenda. Muriel’s startling costumes and makeup pop out of Macon’s gray world like a sign of hope in the fog. By downplaying Ms. Davis’ glamour, Muriel becomes a vulnerable woman with serious problems of her own — making her more believable to those viewers convinced that attractive people are by definition exempt from everyday woes.

The Accidental Tourist pulls us in with its quiet tone and delicate acting. We watch these faces for subtle hints and clues just as we watch the real people in our lives. Their thoughts and ‘themes’ aren’t telegraphed in grand gestures and clever dialogue. A big help to this process is the sensitive score by John Williams, which I think is one of his best. Never resorting to coy noodling or cute effects, it sets the tone of yearning and need with its vibrating strings, and lets us know that these characters won’t be abandoned.

Critic Robin Wood would surely categorize The Accidental Tourist as a ‘theraputic film,’ charting the healing process of an emotionally wounded person. Unlike the prime example Vertigo, Kasdan adds no genre twists or Gothic ironies, just the hope that happiness is possible.

Macon eventually ends up in a foreign country, trapped in a small room and forced to finally make a &%#*@ decision to sort out what previously has been the ‘baggage’ in his life. The therapy works, and Sarah and Muriel will no longer have to idle in suspense. The film celebrates the quiet yearnings of ordinary, isolated people in a way that lifts our spirits. When I saw the show in a crowded theater one could hear a pin drop, and then there was applause.

The Warner Archive Collection Blu-ray of The Accidental Tourist is now much improved on Blu-ray. The transfer is more sensitive to the moody colors of the original — some flashback scenes are purposely cold and greenish, while much of Macon Leary’s daily life is spent in relative darkness. Everything associated with Sarah seems to be earth tones, and then Muriel shows up, as jolting as piece of modern art.

John Williams’ score amplifies feelings already in the scenes. Today’s dramas are dropping music in a search for ‘realism,’ and its true that many older scores were used to impose emotions on indifferent material. I don’t think that’s the case here.

The excellent old extras have been ported over intact, as is Warners’ custom. Lawrence Kasdan is on camera for an introduction and a docu that serve as terrible spoilers and should be avoided before seeing the film. The docu has interviews with Kasdan, Turner and Davis. It starts badly by merely restating the film’s plot, characters and themes, but soon gets into more rewarding content. Geena Davis provides a partial commentary track that thoughtfully skips around the film, and is perhaps a half hour long. This allows her to address her hiring, the character, the way the film was shot and her glorious Oscar night story without having to hurry up or slow down. Ms. Davis is a delightful personality and great fun to listen to.

Also illuminating is a tight array of eighteen deleted scenes, most of which fill in plot points and connect dots in the timeline, yet are not missed in the finished film. What’s that new sofa doing in Macon’s house? What happened to Muriel’s car? Two supporting characters have been dropped, Macon’s mother and Muriel’s mechanic/babysitter friend Dominick. I couldn’t make casting IDs for either actor. Shrewd editorial judgment was exercised to cull this often-good material.

Carol Littleton’s editorial wisdom extends to some re-shooting and telescoping of early scenes — the originals we see here are played at a much higher tension level. To recognize this and reshoot the beginning was inspired, as The Accidental Tourist now opens with a quieter series of scenes that let the drama creep up on us.

One excised scene was likely dropped because it made Macon appear too unstable – he suffers a panic attack at the top of the World Trade Center. It explains exactly how Macon first called Muriel, filling a hole in the fabric of the finished film. When we see his first fearful look at the tall towers and share his stratospheric tower-top view of the East River, we experience a faint panic attack of our own. That’s the 9/11 effect, I suppose.