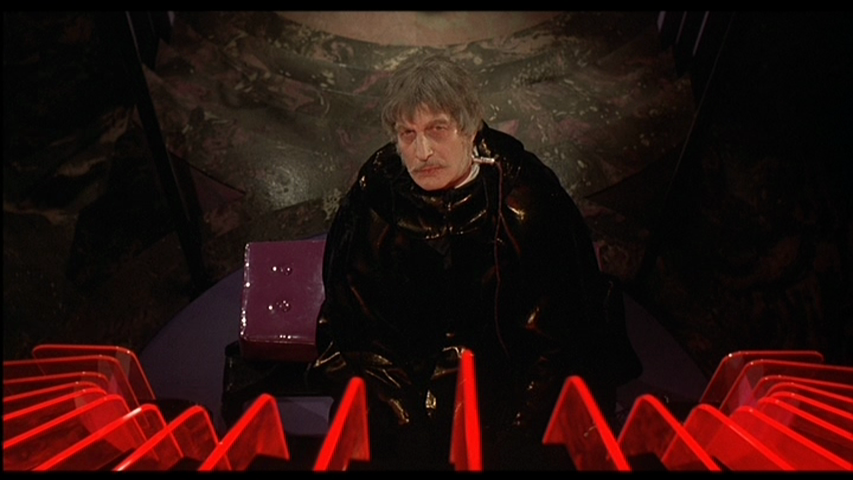 The pomp and circumstance of Felix Mendelssohn’s “War March of the Priests,” as played on a grand pipe organ by a hooded figure seated in an opulent ballroom during the opening credits of The Abominable Dr. Phibes (1971), perfectly sets the tone and timbre of director Robert Fuest’s film, both with playful irreverence and an eloquently ominous aural shroud of dread. The events we’re about to see play out in the film will hardly be a righteous procession of missionary or military zeal, as Mendelssohn’s music was originally intended to evoke. Instead, as it rings and bellows forth from the ornate instrument in this eerie chamber, one which feels at once haunted and strangely festive, Mendelssohn’s fervor is immediately cast with the unmistakable sense of having been drawn forth from someplace much darker than one of heavenly inspiration. 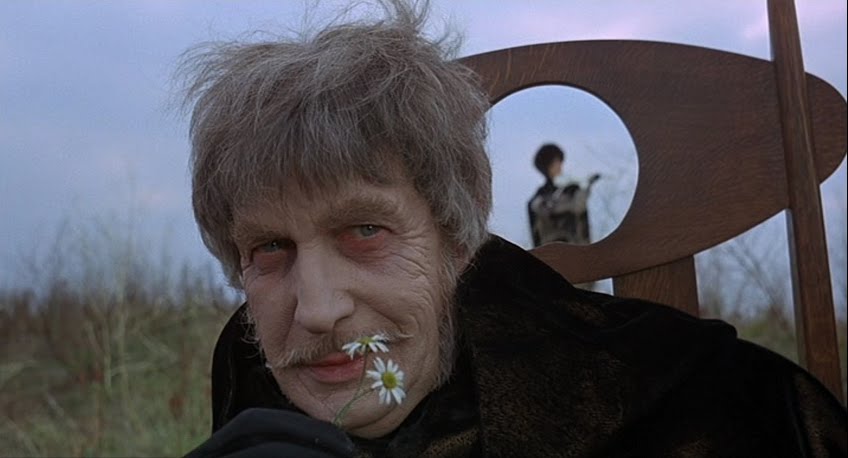 The organ itself rises from the bowels of the chamber and comes to a rest at the top of a rise of marbled stairs, as if on an altar, and set against a fiery proscenium of red and orange light, while the musician at its keyboard, clad in a flowing black robe, his back turned to the array of clockwork musicians silently populating the bandstands below, resembles nothing so much as a priest, all right, but one of a decidedly satanic nature, and probably not the sort Mendelssohn had in mind. Consequently, the music this priest conjures, whatever its original intent, promises not salvation or undeniable strength of national force, but instead the surety of righteous fury, vengeance, of the quite theatrical spilling of blood.

As great and inspired appropriations of classical music in the history of horror films go, especially in terms of indelibly bonding the imagery of the music with that of the film, the use of Mendelssohn’s “War March of the Priests” in The Abominable Dr. Phibes ranks with the most memorable, including the use of “Swan Lake,” which decorates the soundtrack of Dracula (1931) with ineffable dread, and the foreboding whistle of Grieg’s “The Hall of the Mountain King” to signal the arrival of unspeakable horror in Fritz Lang’s M (1931), up through Johann Sebastian Bach’s “Toccata and Fugue in D Minor” standing in as hell’s fanfare in the 1972 anthology classic Tales from the Crypt.

In The Abominable Dr. Phibes, music does indeed spring from the soul, but it’s a soul that has been blackened and charred, one bent toward revenge borne on devilish wings. Famed organist and musicologist Dr. Anton Phibes (Vincent Price, in what was heavily touted at the time of the film’s release as his 100th screen appearance), long thought dead after a fiery car crash, has used his vast knowledge of musical physics and acoustics to reconstruct his body and his voice and wreak his own sort of biblical vengeance upon the surgical staff who failed to save the life of his beloved wife—the awful fates he choreographs for each of the nine doctors use God’s own menu of punishments, variations on the 10 plagues visited upon Old Testament Egypt as punishment for the enslavement of the Hebrews, as their vicious, but not-at-all humorless template. 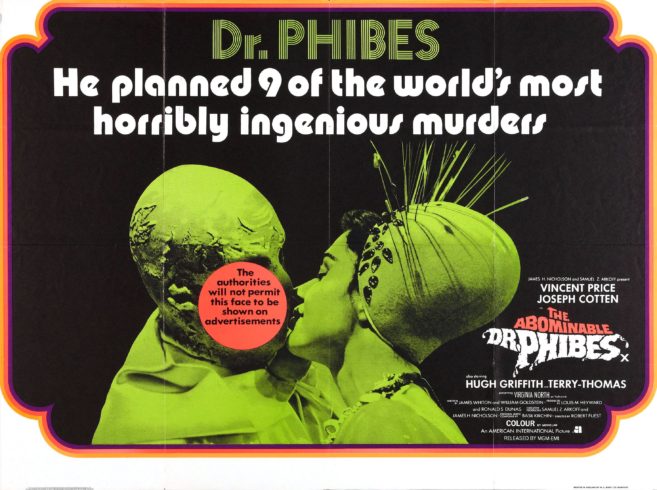 And entirely appropriately, Fuest, working from a screenplay by writers James Whiton and William Goldstein, informs Phibes with a briskly tuned, musically oriented structure which punctuates the possibly mad but undeniably romantic Dr. Phibes’ operatically scaled gestures of death with memorable musical flourishes. After one particularly explosive execution, Phibes and his mysterious assistant Vulnavia (Virginia North) celebrate with an impromptu outdoor violin concerto, and they are also frequently disposed to somewhat somber turns of ballroom dancing, accompanied by that orchestra of clockwork wizards. Meanwhile, composer Basil Kircher has decorated the soundtrack with a lovely recurring aria suffused with Phibes’ perhaps unquenchable longing, cleverly repurposed standards (who knew a swing band version of “Over the Rainbow” could be so haunting?), and a more practical, catch-as-catch-can horror score that may not be orchestrally cogent but is surprisingly effective and memorable nonetheless. 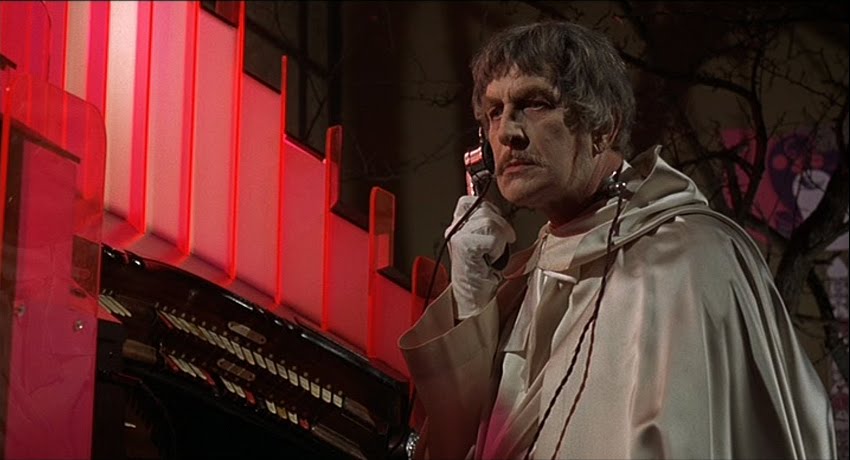 Director Fuest and set designer Brian Eatwell both sprang from a tour of duty with The Avengers (1968-1969), so the expertly modulated balance of horror with a sense of humor and witty visual resplendency that informs Phibes shouldn’t come entirely as a surprise, and they’ve taken care that the movie’s love of musical excess should be reflected in its agility with balancing tones of comedy and horror in the manner of a robust, reliably gory and even occasionally lewd symphony. The unfortunate Dr. Longstreet (Terry-Thomas) is dispatched by the slow-draining of his blood in one of Phibes’ most genuinely painful sequences, but it is preceded by a grand bit of naughty physical comedy—Longstreet has ushered his housekeeper out of the house so he can privately screen a dirty movie, in which a belly dancer dances with, and eventually begins to fellate a boa constrictor, and as framed by Fuest the motion of Longstreet hand-cranking the projector more than amply suggests what he might be seen doing were this movie not bearing a relatively “family-friendly” GP rating. And one of the movie’s most memorable musical cues even provides a direct link to the sort of comedy glory with which Phibes is amply seasoned—Kircher’s accompaniment to the film’s suspenseful denouement, in which the lead surgeon, Dr. Vesalius (Joseph Cotten), must remove the key implanted in the chest of his young son which will release the boy from a harness before acid can rain down upon his face, pops up only a couple of years later as the hyper-dramatic “score” to the hilarious Monty Python sketch “The Day Nothing Happened.” 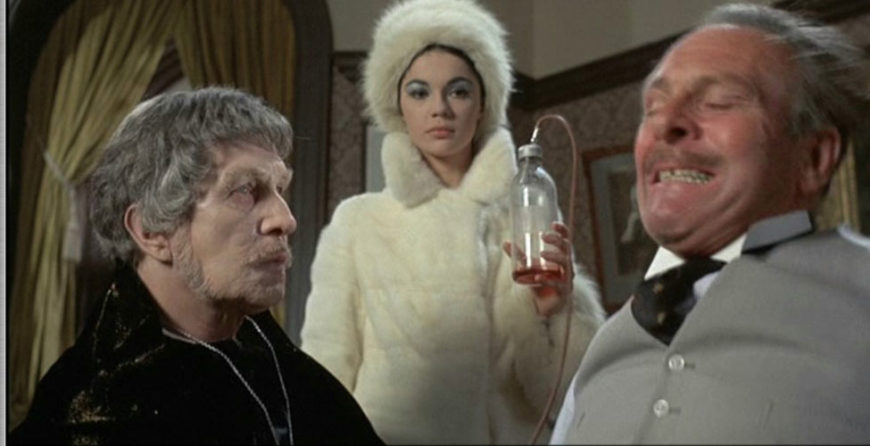 Vincent Price’s 100th feature was promoted with vigor by the usually fiscally conservative American International Pictures and it became a big hit in 1971—I saw it with a pal on my 11th birthday, after being sufficiently titillated by a barrage of newspaper and TV ads that expertly primed my fascination. It even spawned an entertaining but noticeably less-effective sequel, Dr. Phibes Rises Again, in 1972. And in 1973 Price extended his now apparently personal theme of wreaking revenge in the name of wronged artists with a film that could be considered an unofficial Phibes sequel, 1973’s Theater of Blood, in which Price plays a Shakespearean actor savaged by critics who visits vengeance upon his tormentors in the manner of elaborate deaths derived from the Bard’s plays. 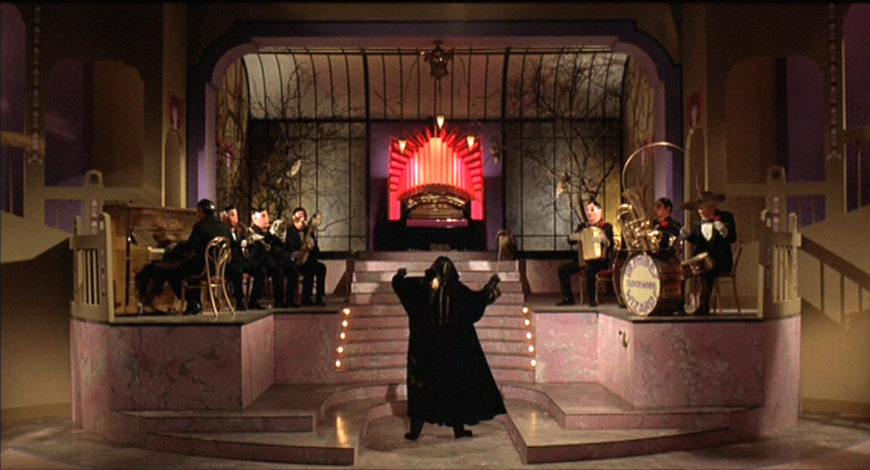 But as good as that one was, and it was good, markedly better than DPRA, even Theater of Blood can’t compare to Price’s first foray into self-righteous, furious comeuppance. There aren’t many horror films, if any, that soar, sing, swoon and shock in quite the way that Phibes does so ably, or many that intermingle sorrow, nastiness and comedy in the way that makes this movie stick to the ribs, especially for those, like me, whose early impressions of what horror could be were formed by seeing it at a young age. Would that it were so. But if it were, maybe we wouldn’t be so quick to recognize the singular symphony of sounds, scares and silliness that make this movie such a delight in the first place. Inspired by Price, Fuest, Eatwell, Whiton and Goldstein and many others, The Abominable Dr. Phibes makes its own special music in the darkly funny recesses of its black heart and, like Mendelssohn’s priests, marches accordingly. 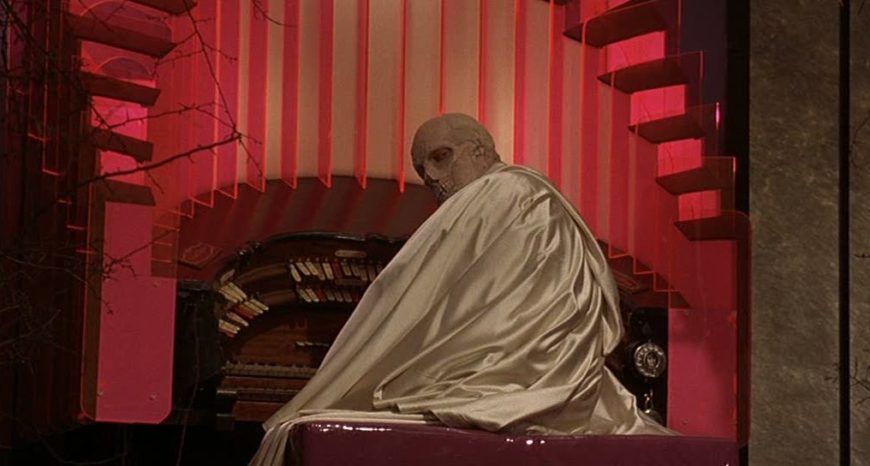 (The Abominable Dr. Phibes, which just finished a weekend run at Los Angeles’s storied New Beverly Cinema, returns to the theater for an 11:59 p.m. screening Saturday, May 13. But if you can’t make it to Los Angeles for that, the movie can still be obtained on MGM’s Midnite Movies disc series.)