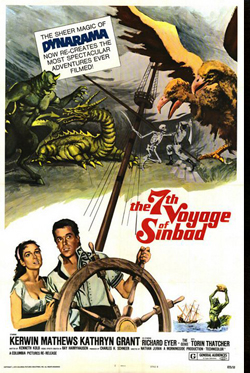 The 7th Voyage of Sinbad

A generation of baby boomers were forever enchanted by a passel of fabulous monsters in this now-classic fantasy hit. After years of working on Sam Katzman B pictures, FX genius Ray Harryhausen and his producer Charles Schneer moved up the ladder with a comparatively larger budget but still economical Arabian Nights adventure whose sleeper success spawned another two decades of Harryhausen magic. An enthusiastic Art Gilmore hawks the spectacle in this pre-release promo reel, almost a short subject in itself. Oddly, when this was reissued in 1975, Dynamation became Dynarama!