With the publication of an expanded edition of Reynold Brown: A Life in Pictures, it’s official… Brown was responsible for illustrating every movie poster ever made. Ok, not really but it will seem like it to anyone poring through page after page of some of the most potent propaganda in Hollywood history. An update on the update appears at the end of this review of the 2009 edition. 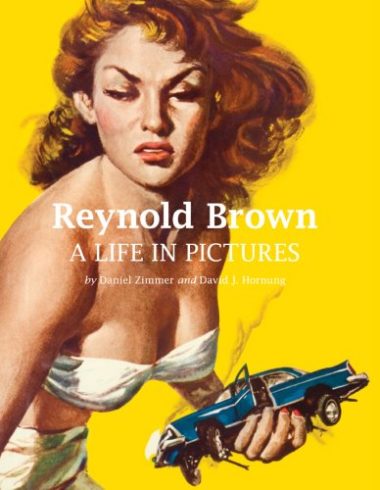 The era of the illustrated movie poster, that ideal marriage of art and commerce, has long since faded along with the posters themselves. From the big-top colors of Al Hirschfeld’s caricatures for A Night at the Opera to the orange whirlpool of Saul Bass’ Vertigo one-sheet, these were advertisements that excited the senses as much as the films they were designed to promote – if not more so. Contemporary movie posters seem determined to stifle those sensations. Victims of focus-groups, studio timidity and Photoshop, modern-day movie art is as blandly literal as the packaging of a frozen dinner, the actors demoted to mere ingredients, the director just a part of the cooking instructions. 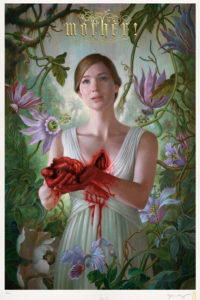 On occasion, art still prevails over this particular kind of group-think. Comic artist Daniel Clowes’ anxiety-prone antiheroes populate the one-sheet for both Todd Solandz’ Happiness and his own Ghost World. The elaborate campaign for the politically charged V For Vendetta was nothing less than an celebration of activist art. And James Jean’s ripe pre-release artwork for Darren Aronofsky’s overripe Mother! was a tantalizing intimation of the Hellzapoppin’ antics yet to come. And speaking of mondo, that Austin, Texas design company, Mondo, still continues to produce invigorating re-imaginings of classic poster art that could hang with the best of that late, great golden age of movie art.

The illustrator Reynold Brown probably didn’t think he was part of any kind of golden age, but Reynold Brown: A Life in Pictures suggests otherwise. Born in 1917 in San Gabriel, California, Brown was the very picture of a child prodigy, learning to handle a pencil while he was still in the crib. In 1935 he was given a scholarship to the Otis Art Institute in Los Angeles and began his professional career ghosting for cartoonist Hal Forrest on his daily strip, Tailspin Tommy. 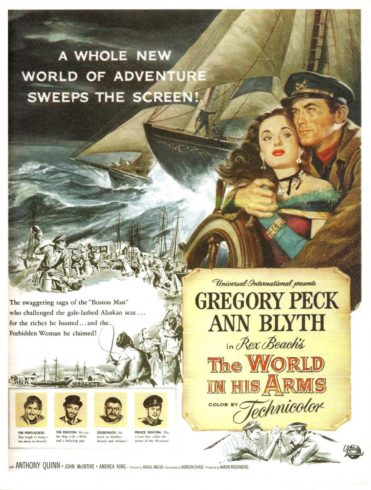 After leaving Forrest’s employ, Brown struck out as a freelancer, illustrating men’s magazines and romance novels. Some of his best work can be found in his fiery panoramas for Argosy and Boy’s Life but he couldn’t hide his boredom when painting the star-crossed paramours of standard-issue bodice rippers; Brown needed another kind of action to bring his work to life. A 1951 exhibition at the Art Center of Design in Los Angeles brought him to the attention the art director for Universal Pictures, Mischa Kallis, who hired him to create the poster art for Raoul Walsh’s seafaring epic, The World in His Arms. The result was a hit with the studio and Brown quickly settled into what would prove to be an astonishingly productive career, creating art for some of the most diverse, let alone seminal, motion pictures ever made. 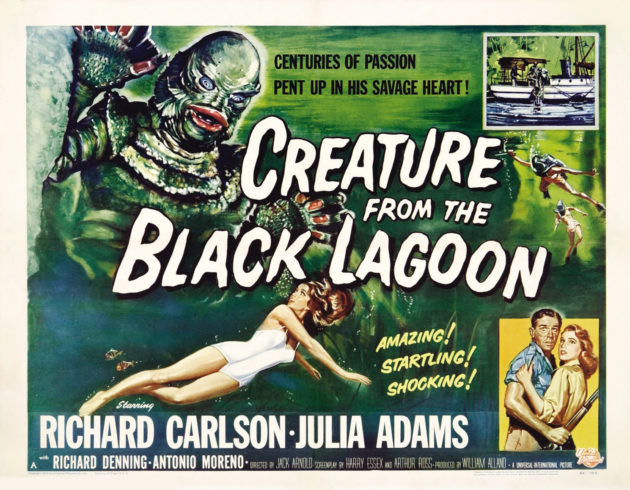 From The Creature from the Black Lagoon to Spartacus, Brown fired the imagination of a generation of movie goers. He set his characters against a panoramic canvas bursting with super-saturated color and frenetic action scenes that seemed to extend into infinity, ideal for suggesting the histrionic grandeur of Ben-Hur or the world-shaking attack of The Monolith Monsters.

He worked on the campaigns of a number of high-profile blockbusters (including The Alamo and How the West was Won) but it was his great run  on low-budget Universal and AIP movies (including The Incredible Shrinking Man and Roger Corman’s Poe films) that hypnotized children of the fifties and sixties. It’s not too shocking to suggest that Spielberg, Dante and Tarantino were more inspired by Brown’s artwork than the films themselves.

1958’s Attack of the 50 Foot Woman, a film with a budget somewhere south of Ben-Hur’s, is nevertheless his most iconic piece of work. Featuring a toweringly voluptuous Allison Hayes laying waste to an L.A. freeway without batting an eyelash, Brown dreamed up a phantasmagoric culture-clash fusing pin-up art, giant monster movies and pre-feminist girl-power. That there is nothing remotely like this amazing imagery to be seen in the actual movie is to understand Brown’s mastery of that fundamental element of motion picture promotion, the artful con-job. 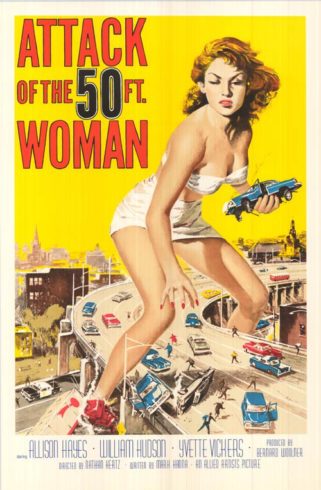 As the sixties wore on, Brown grew increasingly uncomfortable with the rowdy nature of the projects he was offered. In 1970 he sat down to produce the poster art for The Dunwich Horror, a Lovecraft-inspired tale of ancient demons and kinky rituals. When he was finished, the salacious image staring back at him (a tentacled creature slithering up and around Sandra Dee’s heaving bosom) proved to be the last straw for the conservative-minded illustrator. It would be his final piece of movie art. He spent the remainder of his life painting wild west fantasies and privately commissioned portraiture. In 1976, he was felled by a stroke that left him temporarily paralyzed and after months of exhaustive rehabilitation, the strong-willed artist was able to regain control over his painting hand and get back to work. Brown passed away in 1991.

Zimmer and Hornung’s work sketches the high and low points of Brown’s life, wisely leaving the bulk of the book to beautiful reproductions of his art. Even so, they provide just enough detail to hint at the deeper aspects of Brown’s character; a shy man who shunned the Hollywood nightlife to focus on his family and his craft. Brown left life as he entered it, surrounded by his loved ones and with an unquenchable desire to paint. Those paintings beguile us to this day, their epic, showboating glory still intact; hyperbole in excelsis. 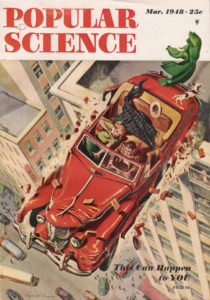 Update – In 2017  The Illustrated Press released an expanded version of Zimmer and Hornung’s book, adding alternate images and brand new imagery that, while it doesn’t increase our appreciation of Brown’s talent, certainly underscores his remarkable versatility. Along with the original artwork (sans typography) of one of his more alarming paintings for the March 1948 edition of Popular Science, there are dozens of new posters from Battle Hymn and The Unguarded Moment to a cigar-chomping Dorothy Provine doing her best Sgt. Rock impersonation in The Bonnie Parker Story.

Popping up here and there are curios including a puzzling bit of promo art for The Last Man on Earth (a stark portrait of a gothic mansion though no such house exists in the film). The new edition seemingly solves a puzzle… who was that distinctive artist for early ‘60s Disney films like The Shaggy Dog? It was Brown, apparently, working in a more family-friendly style, tamping down the overheated theatrics but adding an appropriately comic fizz to Uncle Walt’s ballyhoo.