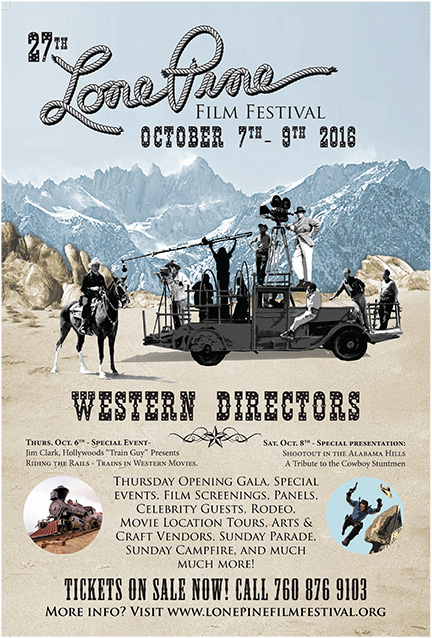 Ten years ago I attended the Lone Pine Film Festival for the first time. It was the 17th annual celebration in 2006 of a festival dedicated to the heritage of movies (mostly westerns, but plenty of other genres as well) shot in or near the town of Lone Pine, California, located on the outer edges of the Mojave Desert and nestled up against the Eastern Sierra Mountains in the shadow of the magnificent Mt. Whitney. The multitude of films that could and have been celebrated there were most often shot at least partially in the Alabama Hills just outside of town, a spectacular array of geological beauty that springs out of the landscape like some sort of extra-planetary exhibit, a visitation of natural and very unusual formations that have lent themselves to the imaginations of filmmakers here ever since near the dawn of the Hollywood filmmaking industry. 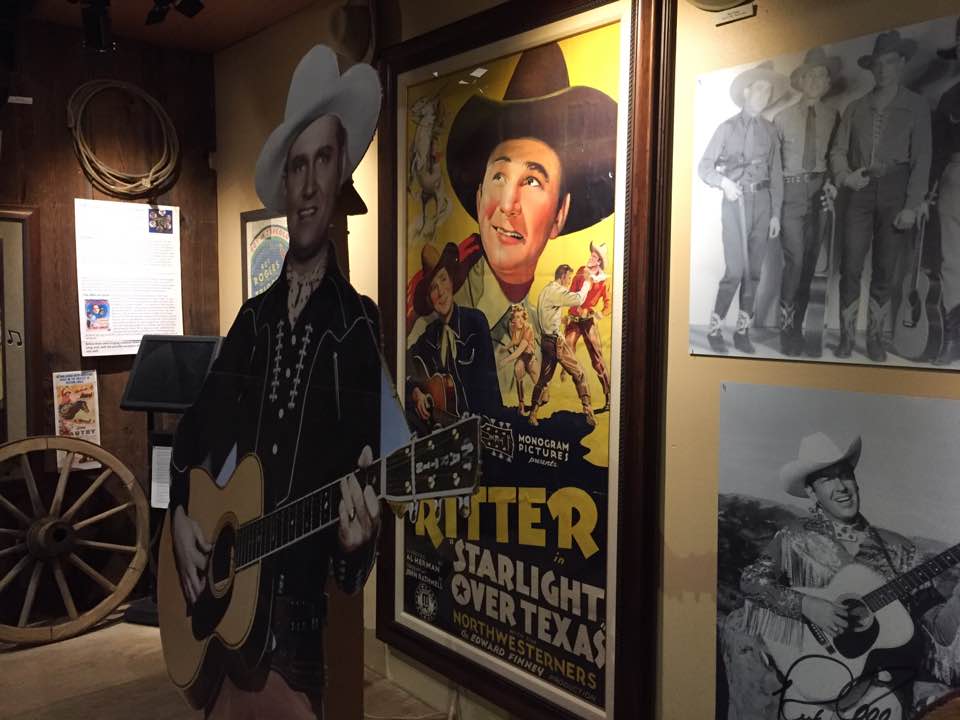 In writing about the LPFF in 2006, I said “Some might call it Cannes for the cowpoke set. Others might think of it as Toronto with tumbleweeds, or a six-gun Sundance.” The problem with those comparisons, aside from their author’s overly enthusiastic alliteration, is that they do a disservice to the Lone Pine Film Festival. Those three film festivals used for comparison, and hundreds of others just like them, are great showcases for important work and trends happening in international and independent film, and they’re also marketplaces where producers, actors, financiers and all other manner of hangers-on come to shill for their latest projects, make splashy distribution deals and, of course, to be seen.

But more so than just about any other film festival I can think of, and certainly more so than any other that I have attended, the Lone Pine Film Festival is the opposite of all that. It is the friendliest, least pretentious gathering of movie enthusiasts I could possibly imagine—for three days, beginning on Friday morning and ending with a parade through town and a festival campfire after dark on Sunday, the town is filled with folks whose memories and passions are invested in precisely the sort of movies—B-westerns, low-budget adventures and the occasional widely recognized classic—that wouldn’t get a sniff from the cognoscenti at a more typically urbane festival. The demographic skews older too, of course—a lot of folks in town for the weekend were kids in the ‘30s, ‘40s and ‘50s when these movies were in theaters, or in the ‘60s when many of them filled the parched schedules of local TV stations looking for inexpensive filler programming on Saturday and Sunday afternoons. And nobody is in town to be seen, well, except maybe the fella from Australia who makes the trip annually and dresses up as his boyhood idol William Boyd, aka Hopalong Cassidy, and ironically, though I met at talked to him in 2006, I didn’t see him at all this year. So much for networking. 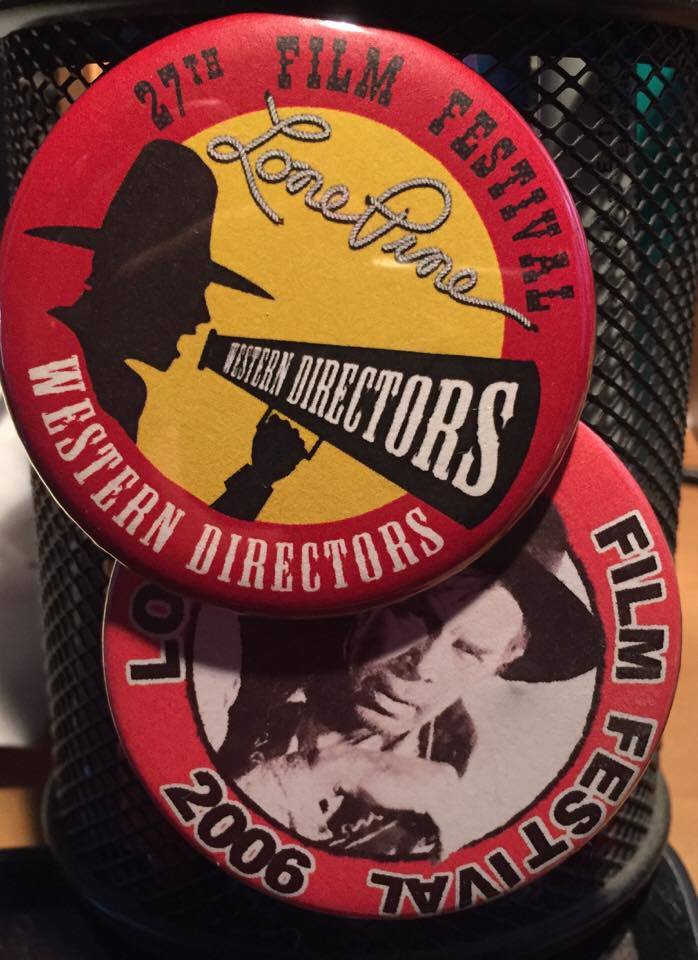 2006 also marked the official opening of the Lone Pine Film Museum, which serves as a sort of Grand Central Station for the LPFF, and right out of the gate it offered a terrific collection of memorabilia, props and posters to fascinate even the most mildly interested fan. It was a very good year to make my first attendance, as I got to meet the reincarnation of Hoppy and also attend a very entertaining panel on stuntmen and western movie villainy featuring Loren Meyers and Diamond Farnsworth (son of actor/stuntman Richard Farnsworth), as well as memorable movie villains Ed Faulkner (McLintock!) and, most memorably, veteran character actor Jan Merlin, who traded his acting in for a career as an Emmy-winning writer of soap operas and told a hilarious story about how he, a New York-trained actor with no experience riding horses whatsoever, bluffed his way through his very first western action sequence, on a western programmer starring Dale Robertson called A Day of Fury.

The Lone Pine Film Festival also features, of course, films all day Friday, Saturday and Sunday as well, some starting as early as 8:00 am—real cowpokes stir with the first light of day, you see—but what’s interesting about the ambience of this particular festival is that, because of its unique and accessible proximity to the beauteous surroundings that served as the set for the films it shows, the screenings almost come to seem less important than the experience of just being at LPFF. (LPFF is still showing their films in the local high school auditorium on projected Blu-ray and DVD, which will not exactly be catnip to your average self-important cinephile.) 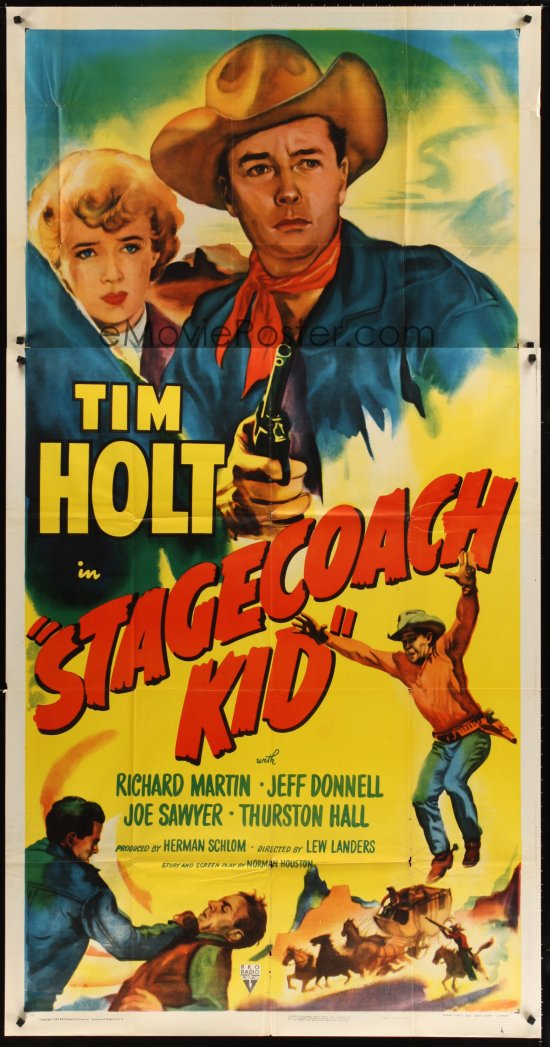 In 2006 I saw four movies here. This year, 10 years after my first experience at LPFF, I attended the festival again, along with my friend, writer and film historian Richard Harland Smith, and we saw a grand total of two movies—a terrific Tim Holt programmer called Stagecoach Kid (1949; Lew Landers) and the Saturday night showcase presentation of 3 Godfathers (1948), shot largely in the Mojave Desert and Death Valley National Park, though the Alabama Hills are visible behind the train station where sheriff Ward Bond’s posse encounters Jane Darwell’s Miss Florie. The screening of 3 Godfathers was hosted by TCM’s Ben Mankiewicz, who talked afterward onstage with Ford’s grandson Dan Ford, who seems to have inherited his grandpa’s notorious cantankerousness, and William A. Wellman, Jr., actor (The Horse Soldiers, Born Losers, It’s Alive, Night of the Lepus) and son of director William Wellman, whose The Ox-bow Incident showed earlier in the day.

And two movies was more than enough, because we spent the rest of our time relaxing at our campsite on the shores of nearby Diaz Lake (we saved a jacked-up motel rate and got to enjoy the great outdoors!), closely examining the offerings of the museum, which has significantly expanded its collection from that of 10 years ago, taking in a panel on western serial director William A. Witney, about whom neither of us knew a whole lot going in, and making our way, sans official tour guides, into the Alabama Hills themselves for a close-up look at one of the greatest stages upon which movie history has ever played out. Oh, yeah, we also hit the VFW breakfast pretty hard Saturday morning, and managed to find our way to an excellent Mexican restaurant right in the center of town on Friday night, though I think our camp breakfast of bacon, eggs and black coffee might just have been the best meal of the weekend.

The 27th annual Lone Pine Film Festival, which happened October 7-9, was a great weekend for a couple of city slickers to settle in, put on our jeans and cowboy shirts and take LPFF at its own leisurely pace. (There’s another difference between Lone Pine and the average film festival—conspicuous and intensely rapid consumption of everything on the schedule is an activity in which virtually no one is interested.) Richard even had boots and a hat, for extra authenticity—with my baseball cap, my look leaned more toward truck driver, but I did okay. We both left on Sunday with our love for the movies that were shot here renewed, and but we were also rejuvenated by the knowledge that not every film festival worth its salt has to be a crowded, exhausting, push-and-pull affair where you see as many movies as possible and then spend the rest of your time in a hotel or a coffee bar bashing out first-impression pieces on furious deadlines.

LPFF was also an excellent excuse just to get out and luxuriate in the crisp, clean air and natural beauty of the desert and the Sierras, an opportunity that I don’t afford myself nearly often enough. (Richard, however, does, and in that regard he provides for me yet another great model for my own habits.) Of all the touring and movie-watching that weekend held, I honestly think that the highlight might have come late Friday night/early Saturday morning, when the entire town was fast asleep and our actual festival experience had yet to even begin. Sometime between 2:00 and 3:00 in the morning, I woke up briefly and just laid there in my tent, listening to the absolute quiet of the desert at night. A few minutes passed before I heard a sound I think I’ve probably only ever heard in the movies: a band of coyotes– five, ten, who knows?– baying together at a moon that had long since slipped behind the mountains and out of my sight. It was one of the most soothing sounds I’ve ever heard, the sort of break in a blessed silence that can be, and was in this moment, so welcome. I slept great that night, and the next one too, and now that I’m back in civilization I’m already missing that quiet, and the music of those desert beasts, and drifting in my mind to a time when I can go back for more. What other film festival can offer a moment like that?

Inside the museum, one of RKO’s camera trucks, used to carry the equipment and ride beside galloping horses for some of the many action shots filmed in the Alabama Hills. 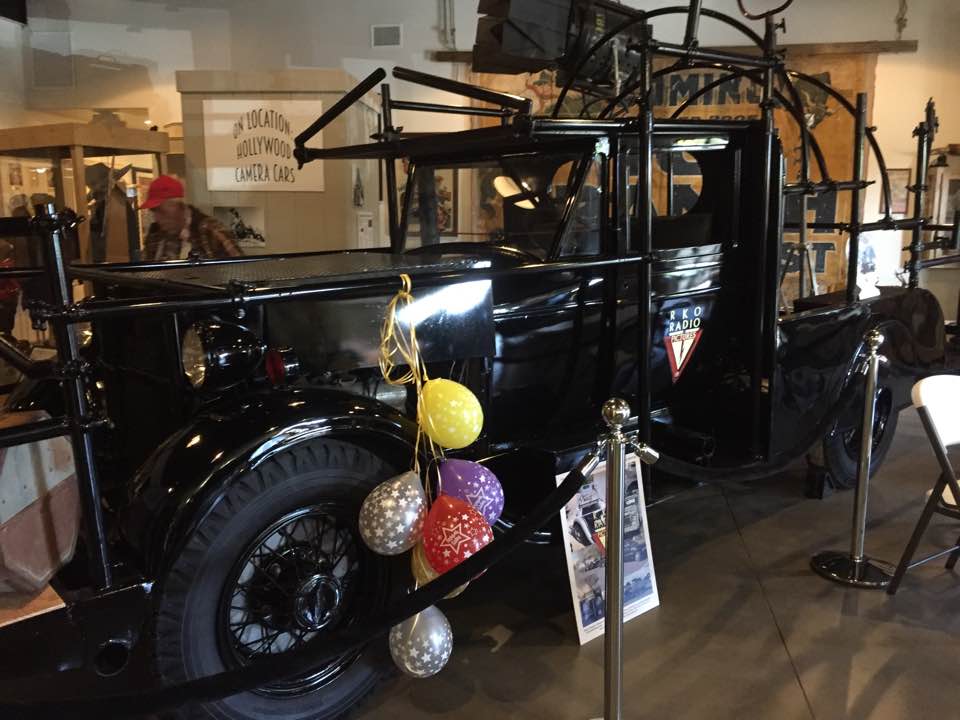 A graboid, the featured monster in Universal’s hit horror comedy Tremors, filmed in the Alabama Hills and the nearby desert. 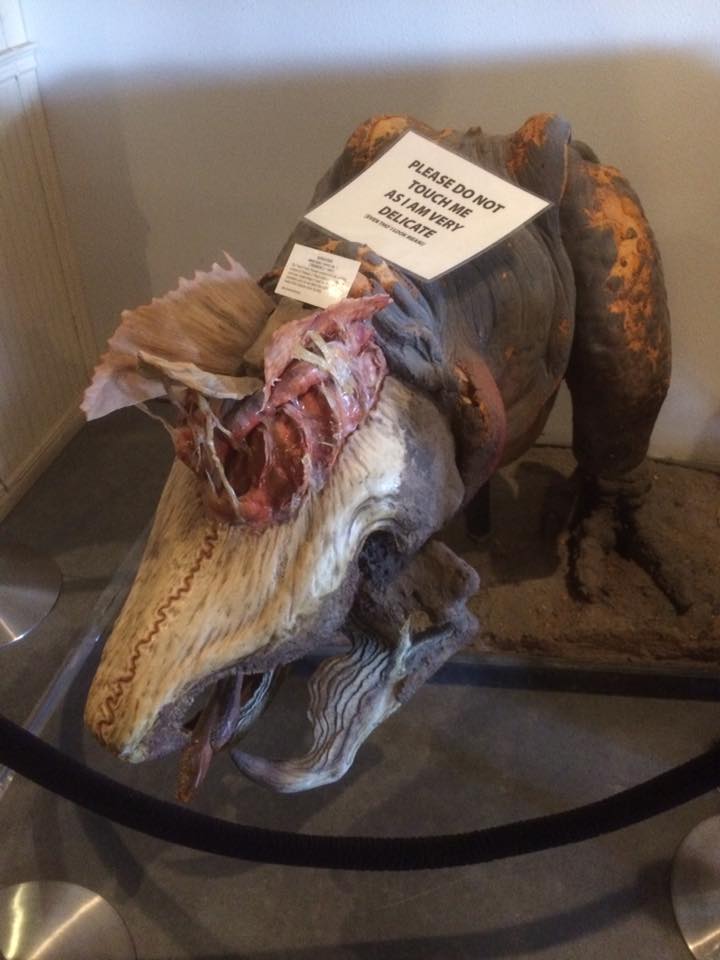 A loaf of the vast collection of Hopalong Cassidy merchandise featured at the museum. 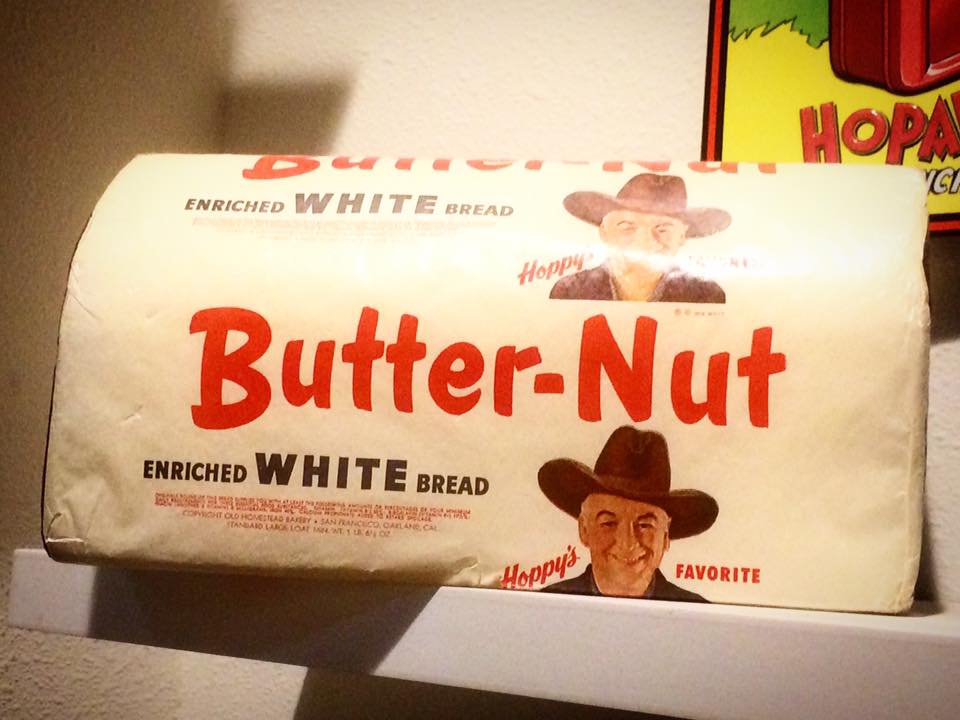 The one-sheet for Michelangelo Antonioni’s Zabriskie Point has its own special place in the museum, near a framed Gene Autry poster, high above the water fountains and in between the entrances to the men’s and ladies’ rest rooms, where it looks to have been hastily tacked up inconspicuously above the average sight line, in order to continue the theme of the movie’s irrelevance to the average participant in movie history, of course. My guess—most attendees to the festival would know the location, but probably wouldn’t know there was an artsy movie by a highbrow Italian director made there in the early ‘70s. 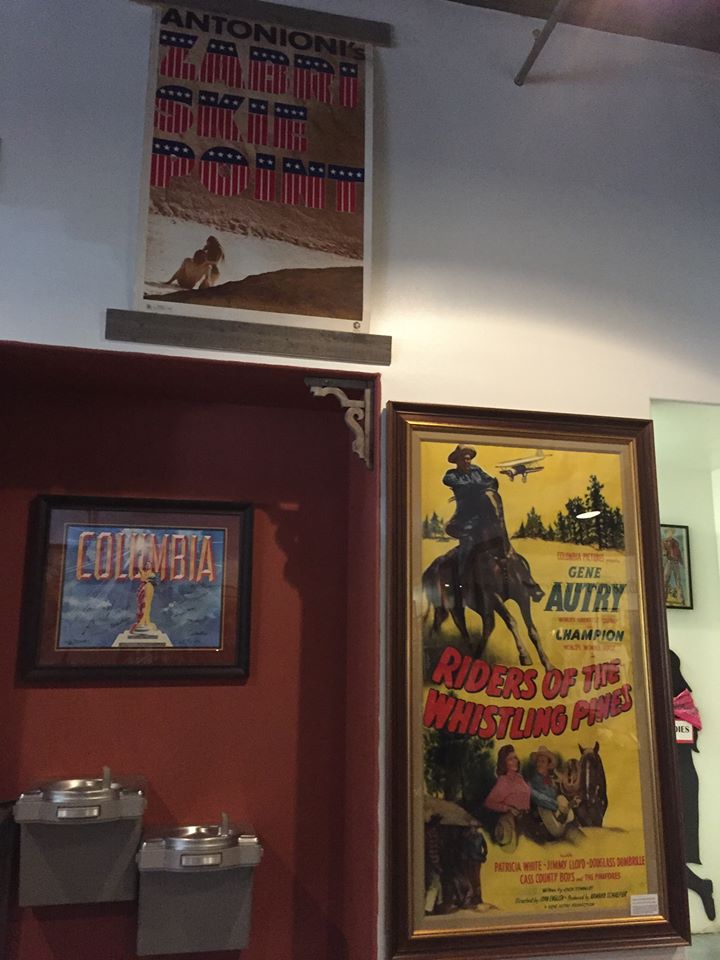 A corner dedicated to director William Wellman, including his pipe and a shooting script from Yellow Sky, his 1948 western, which is featured on the Florida drive-in movie calendar pictured here. 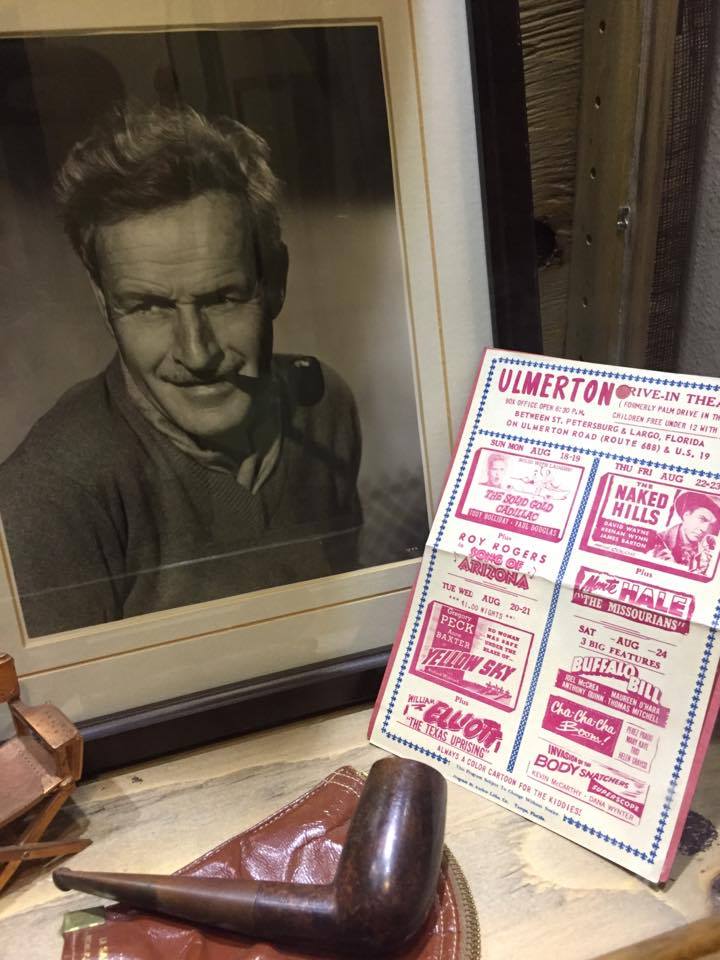 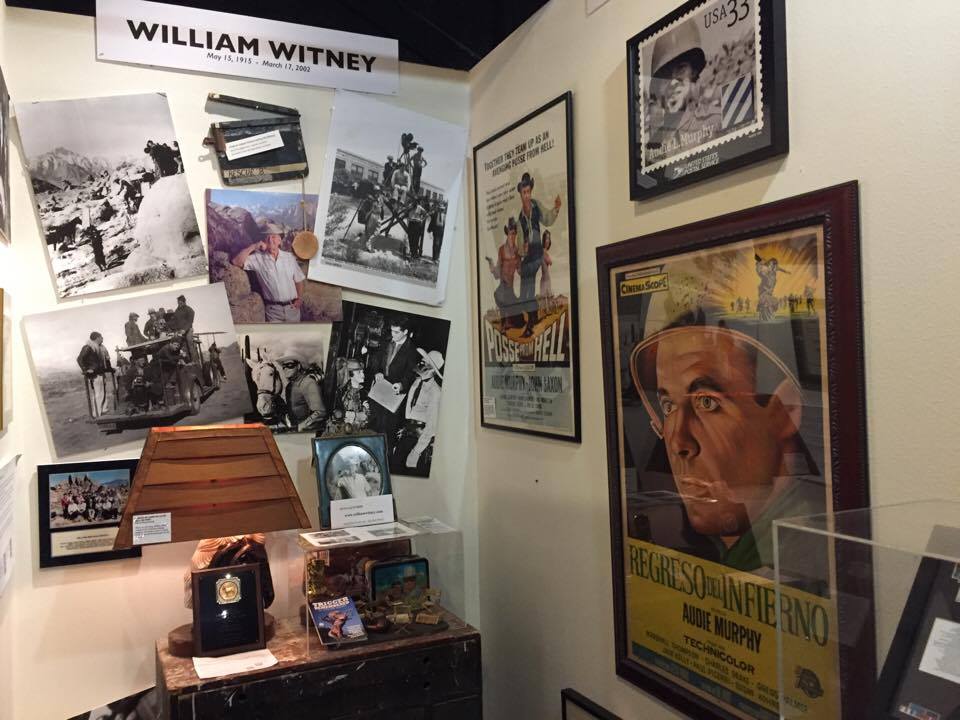 Richard contemplates the hills as we both contemplate the VFW pancake breakfast coming up next. 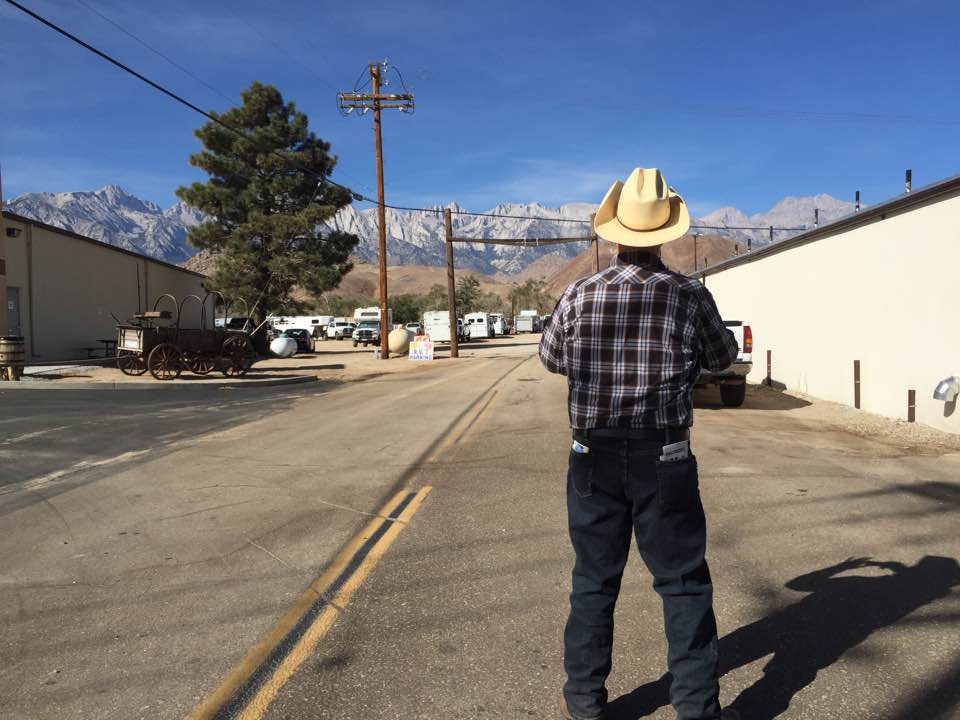 Scattered throughout the Ruiz Hills just outside of town along Whitney Portal Road are many placards indicating the locations for various scenes from Gunga Din, which was filmed there in 1939. 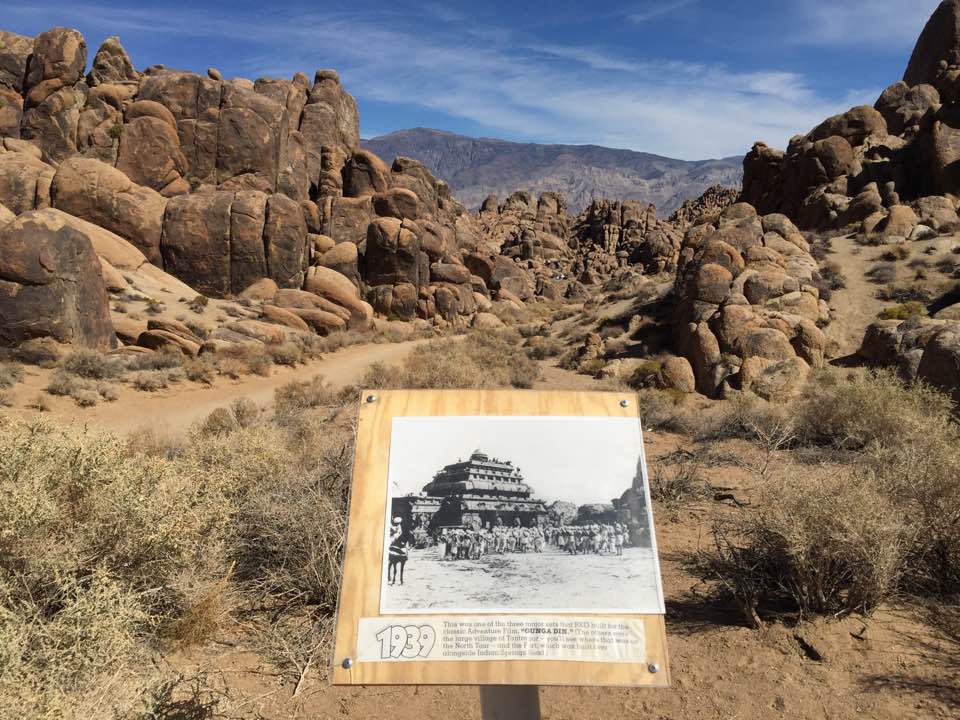 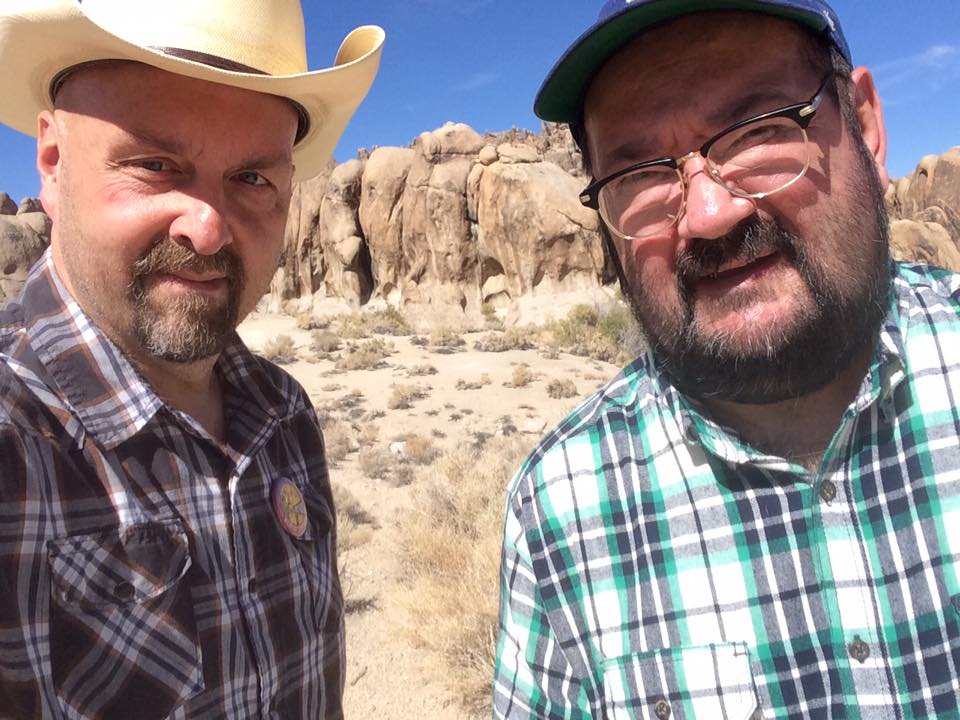 The stark magnificence of Lone Pine and the Alabama Hills seen from Whitney Portal Road, halfway up the drive to Mt. Whitney.

VIP parking on the street outside the screening of 3 Godfathers—that’s William A. Wellman Jr.’s car, we’re guessing! 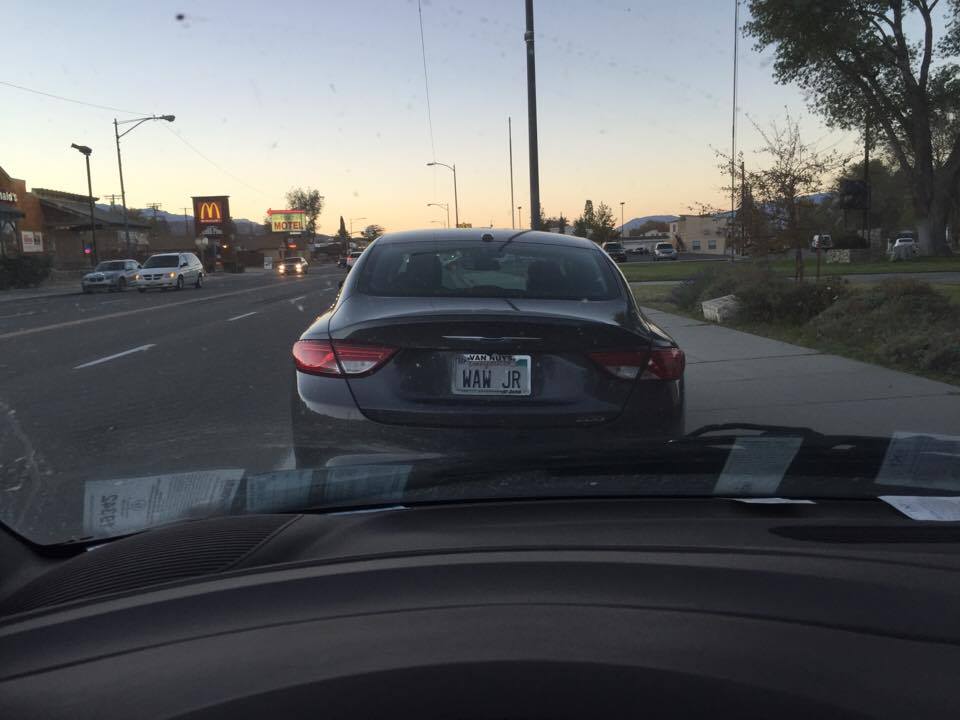 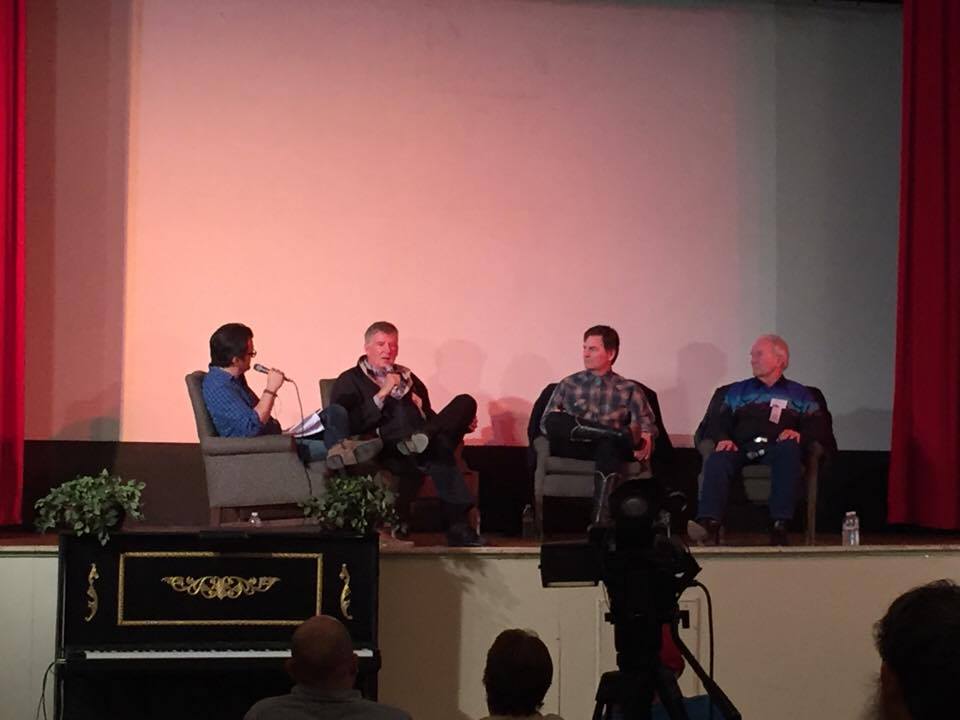 Our campsite alongside Diaz Lake, the site of a peaceful repose during our time at the Lone Pine Film Festival. 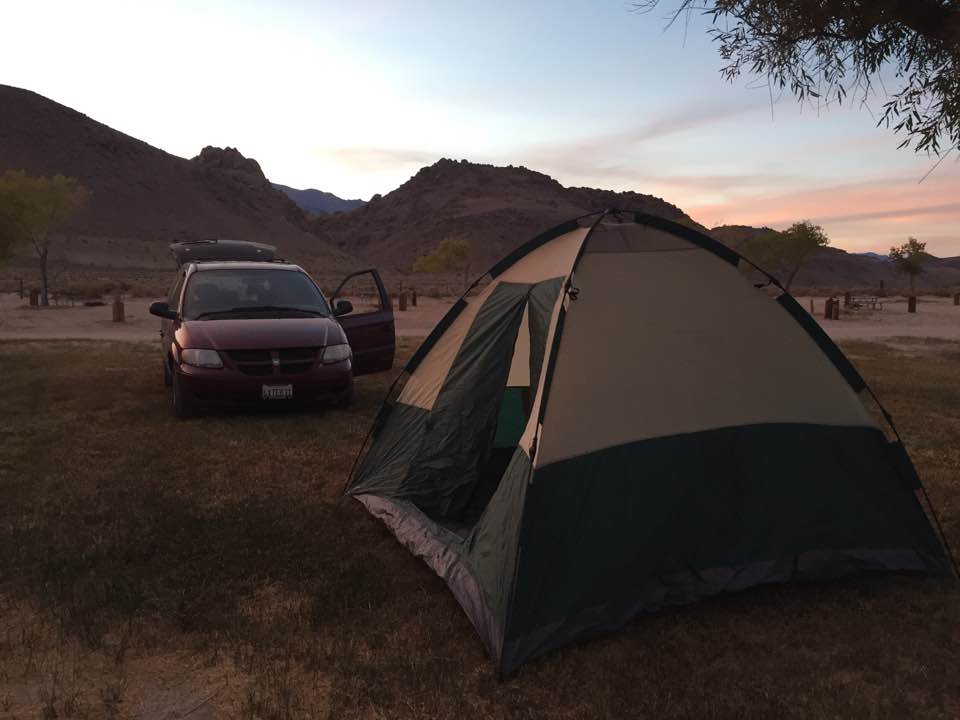