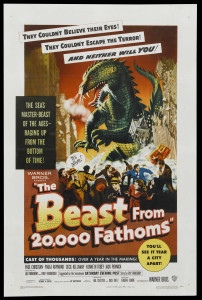 A group of scientists in the Antarctic rig an atomic blast that releases a dinosaur from its icy hibernation. Only one of the explorers, Tom Nesbitt (Paul Christian, Ne, Paul Hubschmid) gets a good look at the beast and he spends thirty or so minutes of the film trying to convince everyone that he’s not crazy. Before he has time to say “I told you so”, the beast has already eaten some of his best friends. Though the creature treats all of New York like the main course, Nesbitt takes the matter personally; The Beast from 20,000 Fathoms is about his efforts to track and destroy the monster.

The Beast is one of Ray Harryhausen’s most satisfying creations, the raging dino seems to tap into the nasty, aggressive part of the great animator’s usually benevolent nature. There’s no sentimentality attached to this monster, no attempt to give him a heart. The beast’s two “human” scenes are his confused attack on the lighthouse (which was derived from the source material, The Foghorn, by Ray Bradbury) and his anguished death throes as the blazing amusement park crashes over him at the finale.

Eugene Lourie’s direction is more than merely competent, it carries the same frenetic drive as the Rhedosaurus as it charges through the streets of Manhattan. Lourie, who also did the production design, always makes sure there’s something interesting to look at, even when the beast is off-screen; the near surreal design of a professor’s “office” with its stand-alone wall separating his desk from a dino skeleton or the pyro-technics and shadow play of the the amusement park inferno. 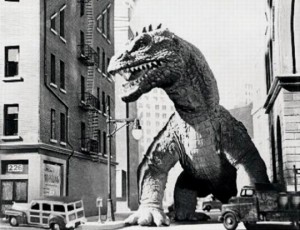 One nagging thought… the nominal hero of the film, the man who has so much trouble convincing people of what he’s seen, is played by Paul Christian… while the late, great Kenneth Tobey stands around in a supporting role. In some respects, it’s probably best for the story… if Kenneth Tobey tells you he’s seen a dinosaur, ya gotta believe him.