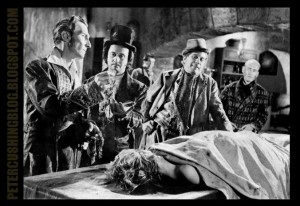 John Gilling’s The Flesh and the Fiends is the story of Burke and Hare, graverobbers who find that murder is a more expedient route to the cadavers they need for their trade. William Burke’s grisly claim to fame is his own entry in the dictionary; to “Burke” is to “… stifle or to execute someone by suffocation so as to leave the body intact and suitable for dissection.”

Moviegoers who entered the theater in 1959 expecting another cheap thrill from the producers Baker and Berman (Blood of the Vampire and Jack the Ripper) must have stumbled out feeling Burked themselves. It’s a completely unsentimental effort that uses exploitation imagery to evoke a bleak Dickens atmosphere, a squalid landscape teeming with the clones of Bill Sikes.

John Gilling’s direction is fluid and intelligent (it makes his Hammer work seem lazy in comparison) but it’s his screenwriting (with Leo Griffith) that is exceptional here. The dialogue contrasts the cold-blooded concerns of both the upper and lower classes with a pitch-perfect ear for slang and malicious ridicule (Peter Cushing’s icy put-downs of some superstitious colleagues are worthy of a 19th century Groucho). The brothel scenes successfully evoke the flesh and the fiends of the title, with tableaus of rumpots and prostitutes that suggest scenes from Oliver Twist painted by Brughel (some of the scenes are actually from David Lean’s 1948 adaptation of the Dickens classic). These scenes are neatly contrasted with the orderly, antiseptic atmosphere of Dr. Knox’ anatomy class (this fiend is compelled to purchase his flesh, too). 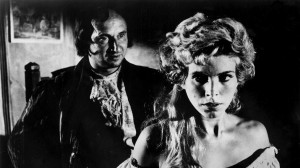 All the main performances are really first rate, but the revelation is George Rose as Burke. He’s a simpleton whose casual violence is born out of a too-common, unfathomable ignorance (“…most of all, beware this child”). He has a monstrously comic countenance (his grotesque buck teeth recall Lampwick, Pinocchio’s wayward chum grown to manhood but still with the teeth of a jackass). In this film, no one’s fate is carefully boxed up and presented as a tidy moral lesson (Rose’s death scene in particular has the comic-grotesque staging of Polanski or Buñuel) … it’s funny how bracing a blast of cold, unforgiving air can be.