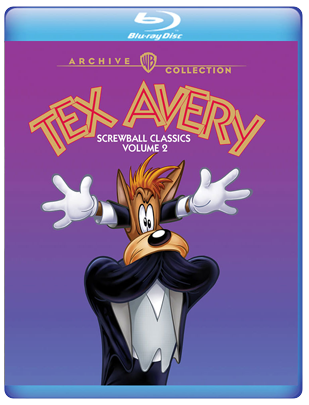 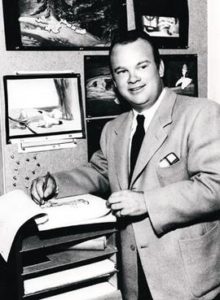 With their bawdy gags and come-hither chorus girls, Tex Avery’s cartoons might seem better suited to the burlesque stage than a movie theater. Your living room is another entertaining alternative and Warner Archive delivers with Tex Avery Screwball Classics Volume 2—their new Blu ray set continues the exploits of the madman of Metro-Goldwyn-Mayer, an artist whose illogical art was produced with mathematical precision and a libido in hyperdrive. Warner has pulled 21 shorts from the vaults for the follow up to their Screwball Classics Vol. 1—it covers roughly the second portion of Avery’s 12 year stint at MGM and though there’s nothing here as explosive as King Size Canary (the ne plus ultra of Avery cartoons) or as groundbreaking as Red Hot Riding Hood, there are a 1,001 laughs to be had—if you can keep up (only one or two episodes per day are recommended). 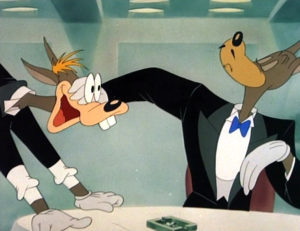 You can count most gags in the Avery canon as the evolution of a previous joke, but considering the repetition, his work is rarely boring—1949’s Little Rural Riding Hood, the sequel to 1943’s Red Hot Riding Hood, actually improves on the original’s premise: a tuxedoed wolf looking for love in the big city (“love” in the loosest sense of the word). This sequel is also more fluidly animated and the graphics more refined (the proportions of that red-headed chanteuse are right on the money). Instead of one wolf we have two; a suave Manhattanite with traces of Ronald Colman and George Sanders (voiced by Daws Butler) and his country bumpkin cousin who makes Disney’s Goofy look like Ricardo Montalbán (not coincidentally he’s voiced by the voice of Goofy, Pinto Colvig). Once again a night on the town is the thread of the plot and a cartoonishly sexy nightclub singer is the main attraction. Avery elaborates on the antics of the turned-on protagonist of Red Hot Riding Hood—still pop-eyed and pre-orgasmic—and the dynamic of the two wolves, one eminently subdued and the other ready to explode, dissects the primal impulses of the typical Don Juan, especially when the bored sophisticate finally loses his cool. 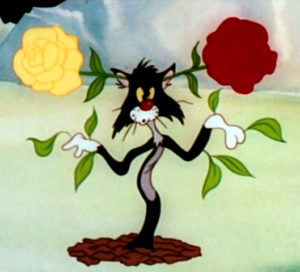 1948’s The Cat who Hated People, about a misanthropic feline who escapes to a bizarro-world of strange creatures, was Avery’s answer to, and appropriation of, Bob Clampett’s Porky in Wackyland—each cartoon is a looney salute to the surrealist movement, in particular the anthropomorphic landscapes of Salvador Dali and Yves Tanguy. Avery’s influences obviously weren’t limited to the art world, movies themselves were always a source for mischief (Avery’s Hollywood Steps Out exemplified his Tinseltown fixation). 1950’s The Cuckoo Clock comes with an Inner Sanctum-like voice-over narrating the tribulations of a paranoid cat and the cuckoo clock that tortures him. 1954’s The Flea Circus is a kissing cousin to It’s In the Bag, a 1945 farce that starred Fred Allen as the frustrated proprietor of a flea circus who inherits a fortune (“Cootie Coach Cops Cash”)—Avery’s not-surprisingly salacious revision centers on the harried impresario of a band of talented bugs that quickly turns into a bedroom farce about two over-sexed insects. 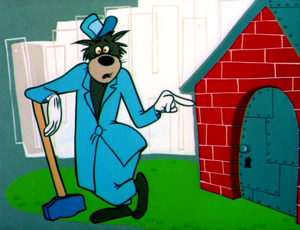 Bill Thompson, the voice for the put-upon pirate Smee in Disney’s Peter Pan, also supplied the vocals for Avery’s Droopy, a deadpan Bassett Hound who made his mark as a dogged sleuth in the manner of Crime and Punishment’s Inspector Porfiry. Droopy is on the case in 1949’s Out-Foxed and 1951’s Droopy’s Double Trouble but The Three Little Pups ignores that formula for a takedown of Disney’s The Three Little Pigs. It’s true to the original plot—Droopy and his two brothers, Snoopy and Loopy, are menaced by a wolf with demolition on his mind, the twist is that this particular intruder is even more laconic than Droopy and would rather watch TV than blow down houses.

The graphics in this 1953 production take on a new dimension too—by avoiding any sense of dimension. The backgrounds (by longtime Tom and Jerry artist Vera Ohman) are minimal and more in keeping with the stylized linear work of UPA than early Disney. Ditto for the character designs which are rendered with broad, dynamic outlines rather than the lush color modulation of the early 40’s shorts. Unfortunately they also make the comedy more abstract and less startling—to see a character’s eyes springing from their sockets, not once, not twice, but three or four or five times, growing bigger with each iteration, feels less subversive in this stripped down environment. 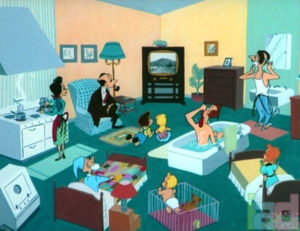 In 1949 Avery launched a series of satires about the technological revolution. The animator was no conventional social critic, he lambasted technology’s infiltration into the body politic on his own uniquely absurdist terms (his take on Naked Lunch would be Naked Brunch). The series focused on a newly automated America beginning with The House of Tomorrow and followed by 1951’s The Car of Tomorrow, each with plenty of light-hearted gags about those inconvenient “conveniences.” But in the third  episode of the series, the subject matter seemed to hit a nerve with the animator.

Avery was certainly familiar with The Human Condition—especially his own—and the burgeoning presence of television was especially threatening to the theater-bound cartoonist; in the spring of 1953 there were few outlets on the boob tube for animation—a typical Saturday morning was made up of live action fare, Rod Brown of the Rocket Rangers, Sky King, and The Merry Mailman (which aired the occasional Crusader Rabbit or ancient Terrytoon cartoon). The rest of the morning was stocked with B Westerns from the 30’s. Avery used those musty oaters to prosecute television’s “vast wasteland” in 1953’s The T.V. of Tomorrow which, featuring narrator Paul Frees at his most stentorian, satirizes the television boom of the early fifties while revealing the movie industry’s fear of the new kid in town. Perched behind gags which land more like warning shots is  Avery as a Paul Revere armed with  a different message for the American family, “Television is coming—head for the movie theaters!” 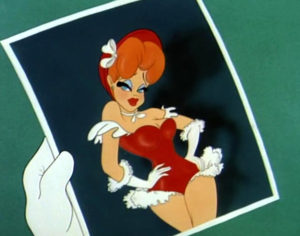 Soon enough Avery’s MGM shorts began to appear on television themselves—usually the worse for wear and at the mercy of a strong station signal. Warner Archive to the rescue—they outdid themselves with the first volume and they’re back with more beautifully rendered transfers. The colors are on the muted side but that may be the effect of Avery’s original palette. There are surely nits to be picked but they shouldn’t prevent any cartoon lover or Avery fan from grabbing this release tout suite. The disc also includes a 1988 documentary from Turner Productions, Tex Avery, The King of Cartoons—apologies to William Marshall, I’m sure.