Still looking sharp 26 years since its premiere, James Cameron’s picture completely masters the mass audience thriller while pushing the effects envelope far beyond the industry’s horizon. Technically slick, conceptually brutal, Cameron’s style is what still prevails in action-based Sci-Fi. All this, and Ah-nold too. 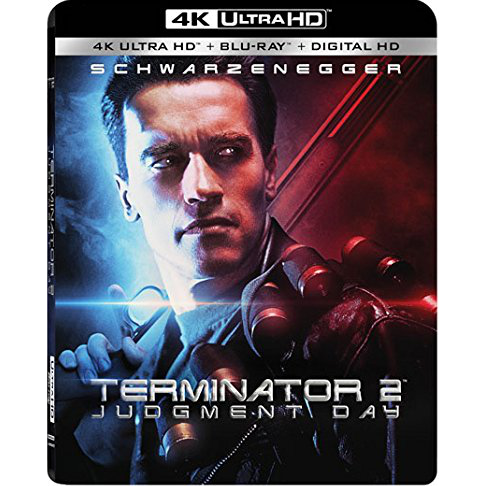 Back again and cleaned up for a new home video format Terminator 2: Judgment Day looks better than ever, showing off the superior effects talents of its demanding producer-director. James Cameron’s career took a giant step forward with each project — one moment he’s pasting together cut-rate effects for Roger Corman, and the next, he’s directing a patchwork sequel to Piranha. He stunned the industry with his 1984 The Terminator, a movie that looks several times more expensive than it was. His 1986 Aliens did the same trick on a much larger scale, firmly interlocking science fiction and violent action into a surefire genre hybrid. Aliens not only respected Sci-Fi traditions, it initiated the ‘action overkill’ technique of drawing the viewer into thrilling, exhausting multiple climaxes. Critics had complained for ten years that movies were becoming roller-coaster rides, but Cameron’s complex attractions left his audiences thoroughly exhilarated.

The Abyss stumbled somewhat because Cameron’s scripting wasn’t good enough to sell the feel-good message in a confusing mix of Sci-Fi and underwater adventure. But The Abyss opened the door on a fantastic new development that would change movies as completely as had sound and widescreen: digitally created visual effects. Cameron was one of the first filmmakers to pull free of the limitations of what could be staged in front of a camera lens.

Best described as ultra-competent, Cameron stepped to the forefront of the industry with Terminator 2: Judgment Day, a vastly complicated violent entertainment machine that could be made only by a mastermind in full control of every technical detail. Already adept at efficient camera storytelling, Cameron gambled with Industrial Light & Magic’s new capacity for creating unique, photographically impossible digital effects. 1991 audiences watched T2 surpass normal technical standards within its first two or three shots — and then proceed into an unbroken string of visual miracles, including the first really successful characters animated through CGI.

T2 brings back Arnold Schwarzenegger as a cyborg assassin, this time programmed to protect Valley Boy John Connor (Edward Furlong) so he can grow up to save the world from a robot uprising. The villain is T-1000 (Robert Patrick), a new-generation bio-robot made of liquid metal that can reconfigure itself into the image of anything or anybody it can touch. It’s The Blob and Invasion of the Body Snatchers combined. The T-1000 oozes through iron bars, forms its arms into steel daggers and disguises itself as a hundred square feet of linoleum tiles. It spends most of its time in the form of a polite, immaculately uniformed police officer — on a one-track pursuit of its prey.

One admires Cameron’s mastery of the building blocks of commercial action cinema, even as his basic cynicism shows through. Imperiled heroine Sarah Connor (Linda Hamilton) is now buffed out like a combat action toy. She’s trained herself to be a one-woman army — and yet she’s supposed to retain our sympathy as a traumatized woman desperately trying to save the world’s children from a nuclear holocaust. Cameron presents emotionally moving images of kiddies on a playground, but his real energy goes toward visualizing an atomic horror more graphic (and sadistic) than anything yet seen. T2 is the ultimate apocalyptic survivalist fantasy: Sarah and friends save the world by embracing guns galore and riding a rising tide of don’t-look-back violence. She’s also quite good at striking wiry-muscled survival-girl poses. It’s Survivalist Chic, all the way.

Cameron and his co-screenwriter William Wisher confect a story overloaded with spectacular, ultra-cool mayhem, most of which is perpetrated by the relentless T-1000. The metallic cop skewers an innocent victim with a finger that grows into a Pinocchio-like stiletto; shotgun blasts blow chrome ‘splash craters’ into its body. All of these wounds heal almost instantaneously. When liquid nitrogen freezes T-1000 into hundreds of ice cubes, he appears to be kaput. But a good thaw allows all the pieces to flow back together like liquid mercury, and the T-1000 is back in business. Since there’s no blood, T-2 is censor-proof. But the surreal visions of the human body being shot, smashed, frozen, melted and splattered is disturbingly gory.

Despite the superior filmmaking, the emphasis on killing technology panders to the crowd looking for exploitative thrills: for all its bemoaning of the fate of humanity, T2 is ‘a little cold around the heart.’ Arnold Schwarzenegger reportedly agreed to repeat his Terminator role only if his character could be made into a Good Guy, a task that Cameron and Wisher accomplish with ease. But the result is guilt-free ‘fun’ violence, and jokes on a killing machine that mock basic human decency. Forbidden from actually killing anyone, The Terminator instead shoots scores of policemen in the knees, a supposedly benign alternative. The sick joke is at the expense of civilized values. I say, go volunteer your services at your local hospital and find out how much fun gunshot wounds really are.

Moral discomfort aside (do people even concern themselves with that any more?) T2 remains a marvel that can exhaust any audience. At about the three-quarter mark I tend to run out of energy, having simply OD’d on non-stop action for the evening. In the next decade or so, the mass audience may rediscover the notion that Less Can Be More, and this kind of thriller will spin off in a different direction.

The cult following for the first two Terminator movies is fascinated by its concept, which blends time travel, apocalypse-avoidance, survivalism and robot-chic into a workable narrative — adapted, as often cited, from earlier movies and TV shows. The storyline resembles some Outer Limits episodes, and is almost identical to an old no-budget Sci-fi turnip called Cyborg 2087. But few people could even sit through all of Cyborg 2087. Frankly, I pay little attention to T2’s time travel aspect, as the freedom engendered by time-travel capability renders normal drama inert. If the future robots failed to kill Sarah Connor in 1984, why the heck did they try again several years later in the timeline, when Sarah knows what’s happening and has had time to prepare? Why not set the Wayback Machine for the week before the first attempt, and snuff her in her sleep? If you don’t believe me, ask Superman: Time Travel means that no mistake is ever final.

Special thanks to Craig Reardon.

Lionsgate’s Ultra HD + Blu-ray + Digital of Terminator 2: Judgment Day is quite a package for the high-end home theater set. It follows up on a successful 2017 reissue in post-created 3-D; after the visual marvel of Cameron’s Avatar, I’d trust that the depth conversion was well done.

By now everyone and his parakeet have seen or purchased multiple editions of this landmark, action thriller. I last reviewed a Blu-ray ‘Skynet’ edition in 2009 that looks quite good, so the appeal of this new release is going to be the boost to UHD, and perhaps the new making of docu, which is an hour in length.

The Ultra HD version is quite spectacular. The new 4K scan is just fine, really presenting the graphic-oriented work of Cameron’s designers and effects folk at its best. Although one can never see a movie ‘for the first time’ twice, UHD gets us close to the sensation. If you remember original 70mm screenings, the feeling of complete immersion in the fantasy is almost the same. There was nothing cheap or limiting about the original effects ($100 million dollars worth) so the added resolution (2160p!) doesn’t reveal flaws we couldn’t see before. The design of the liquid metal title character is still enormously effective, even if the style of the animation is a tiny bit dated.

The UHD disc carries only the 137-minute theatrical version of the picture, and has no extras. Curiously, even though there is no domestic 3-D release for this title, title cards preceding the shows on both formats, mention 3-D. We popped on our glasses just in case, and then remembered that there is no UHD 3-D option . . . one of UHD’s bragging points was that it was replacing 3-D.

The Blu-ray version is not an old encoding, but the same as the UHD. It is said to improve on the 2009 release, which was judged by some having a softened DNR look. I have to say I never noticed, but this looks awfully good. The BD disc carries all three cut versions, the theatrical (137 min.) Special Edition (153 min.) and Extended Special Edition (156 min.) the extended, I believe, simply adds a coda with Linda Hamilton’s Sarah Connor character. Although the theatrical has multiple audio choices, some of the extended scenes are only in English, and the quality drops for them somewhat.

A potential major draw is a new 55-minute making-of docu with new interviews with Cameron, Schwarzengger, Furlong, and others. They talk about a lot more than just how times have changed, and Cameron has clearly kept thinking about the nature of special effects all these years. (By the way, I was told yesterday that Cameron, who is still working on his Avatar sequels, is putting together some kind of docu feature on Science Fiction Directors. Sounds interesting.)

I usually don’t mention money, but from what I see online this disc is really cheap, especially considering the Ultra HD version that’s included. Terminator 2: Judgment Day gave movies the first, biggest push into digital effects. James Cameron is too busy working out ways of submarining and fixing oil spills to make too many movies, but he’s supposed to be knocking us out of our socks with his next offering. I heard something to the effect that he had to wait for the technology to catch up before he could continue? It seems he’s been doing that all along. Some of the more cynical-sadistic aspects of this show turn me off personally, but there’s no denying that it still works like gangbusters. The UHD upgrade is pretty incredible, too.