Aw, this was supposed to be a CineSavant Column entry, but it got way out of hand and became an article. We got a looksee at a horror film that’s been just plain unavailable for at least twenty-five years: out of circulation / MIA / a Dead Parrot. And what did we see in the show but an opportunity for an essentially meaningless but fun photo-comparison feature? Is this a proper activity for an adult?  I’ll be hiding out in motels for the next few nights, so don’t bother trying to corral me with another forcible lifestyle intervention. The cops didn’t find me last time, or the people that went missing! 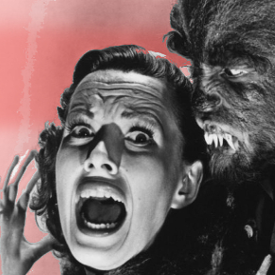 CineSavant self-indulges with a little sub- John Bengtson film location snoopery, which is lots of fun here in Los Angeles. The only problem is that our distinctive neighborhoods and even major public tourist attractions are rarely permitted to stand more than a few years before rabid developers move in with the bulldozers. A friend came to town last year as a tourist. He said he’d memorized the streets in front of Paramount Pictures’ iconic Bronson Gate, from watching William Holden in Sunset Blvd.. But I couldn’t help him retrace the steps of Joe Gillis for a photo, ’cause 25 years ago Paramount bought up the entire block just outside its walls, demolished everything, and incorporated it into the studio’s footprint. And they still don’t have enough parking spaces.

A few days ago I finally got to see the unavailable, out-of-distribution American-International picture I Was a Teenage Werewolf. By luck of he draw, I never saw it back in the day. In fact, I only had peeks at it on TV back in the 1960s, and a two-minute Ken Films 8mm version. I think the last time it screened on TV in Los Angeles was around 1983 or so. 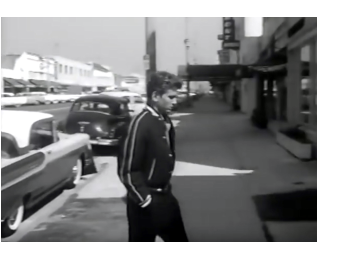 Anyway, there I was enjoying the show, noting writer Aben Kandel’s decent dialogue and the very good direction by the great editor Gene Fowler Jr..  At the 67-minute mark, our unhappy teenage wolfie Michael Landon has just emerged from a night spent in the woods, doing what werewolves do. Landon suddenly gets a lupine desire to phone his cutie-pie girl friend, luscious Yvonne Lime. He starts across the street toward a phone booth, and is called out by a traffic cop, who lets him off with a warning.

Well, right away I realized that this little commercial street is none other than Larchmont Blvd., literally a block away from CineSavant central. The location has been used for many films over the last century. It once had a short streetcar line seen quite a bit in silent movies. Larchmont’s biggest film role that I know of is in Robert Aldrich’s What Ever Happened to Baby Jane? (1962). Bette Davis drives her car halfway down the Blvd., starting at Beverly. We can see the giant sign atop the El Royale building, and then many of the shops on both sides of the street. Baby Jane’s destination is a bank with its own parking lot, a real bank in the middle of the block. It much later became a Blockbuster Video, and then a spin studio.

I Was a Teenage Werewolf was filmed five years earlier, in 1957. It uses the South end of the block, mostly looking North. The Boulevard has changed quite a bit between then and now. Most of the buildings are the same, but large trees have been added and both sides of the street now have parking meters. In the 1957 footage, we can’t see the Hollywood Hills because of morning haze. From what I’ve read, the late ’50s were also peak years for smog in Los Angeles. 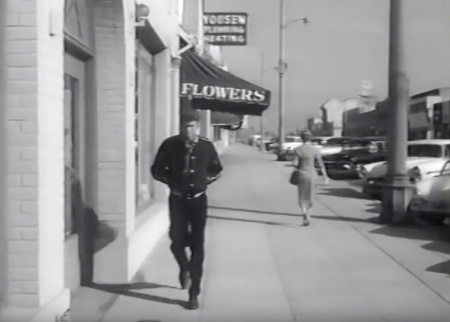 The arch remains although everything else has changed, even the position of street lamps. The sidewalk looks original. 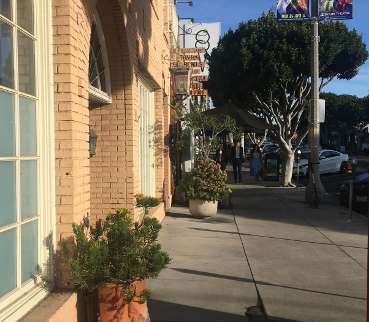 Deep in the background of the B&W movie scene above is a distinctive 3-story building. I’ve enlarged it, just below. Because trees now block the view, I took my comparison photo of the building from a closer vantage point.

Landon prepares to cross the street. 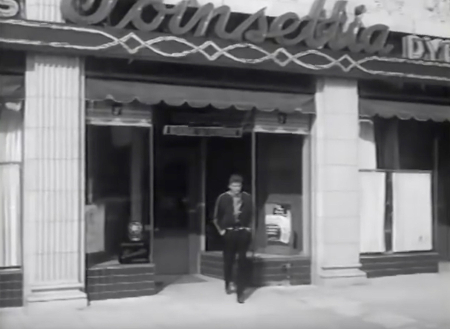 That storefront still has the same grooved pillars on each side, even if most everything else around it is different. 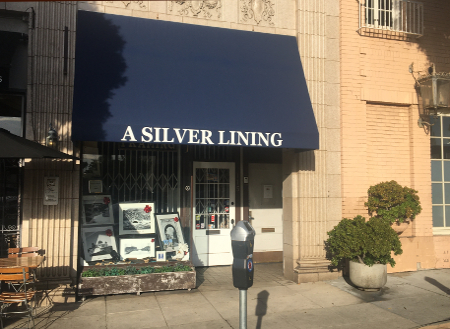 Landon’s view of the other side of the street shows a row of buildings with busy shops. 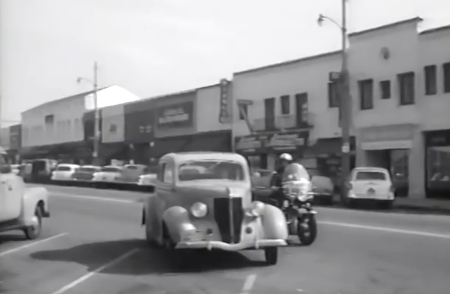 Almost all the shop façades have changed, and the trees keep us from making detailed comparisons. But one building’s matching pattern of windows tells us we’re right where Landon jaywalked. 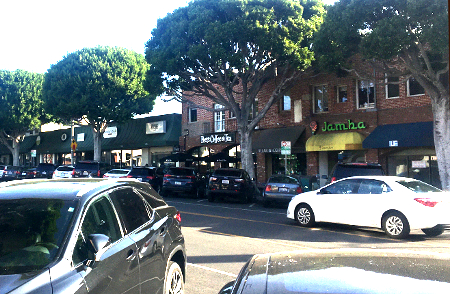 This reverse angle shows another, more distinctive group of storefronts … 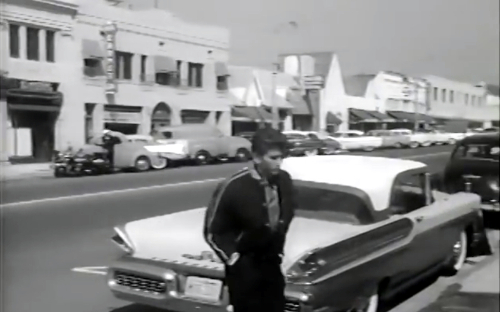 … that have remained mostly the same. That tall triangular storefront barely peeks out from behind a tree. 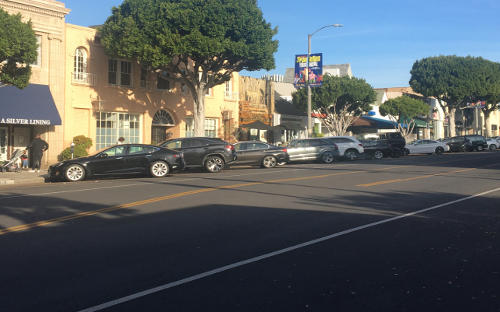 Michael’s destination is this phone booth at a gas station / auto repair shop on the corner of Larchmont and 1st. 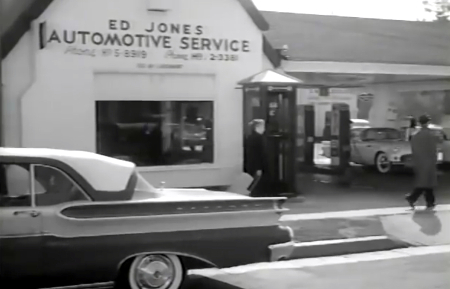 But the auto shop is long gone, and a Bank of America has taken its place. There were once at least three gas stations on Larchmont, now there are none. I’m told that Larchmont also had a little movie theater until the early 1950s. When I arrived in 1973 the street was mostly practical neighborhood shops that enabled me to walk to obtain a lot of basic services: a five & dime, a donut shop, tailors, a full grocery store, a fish market, three little pharmacies, etc. Now it’s all restaurants and boutiques. 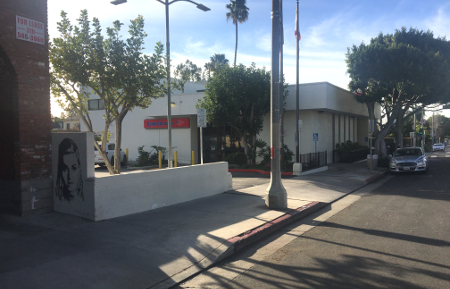 This isn’t meant to be a Chamber of Commerce plug for the Larchmont Business block, where the food is good but the sidewalks are never cleaned. It’s just that I enjoy re-visualizing my neighborhood environs through the time machine of old movies. I’d have posted a Baby Jane comparison a long time ago, but I want to honor a promise to my Warner contacts, not to lift frame grabs from their pictures. It’s fun looking for recognizable locations around my house; I’m hoping that someday I’ll find a movie or TV show where some actor walks or drives right past my door.

Thanks for reading! — Glenn Erickson