Trey Parker and Matt Stone’s ‘outrageous, irreverent’ comedy is a gusher of pointless profanity and smut that will cheer the myriad fans of South Park.  The ultimate message of this cringe-worthy spectacle is that liberals are dupes and traitors, foreigners are either evil or morons, and kicking ass around the world is our national birthright. Go team! 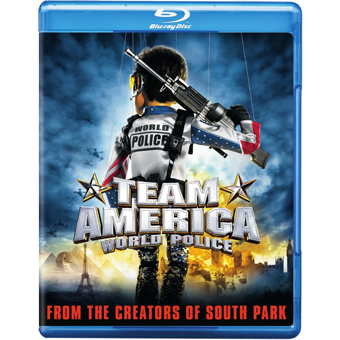 Team America: World Police looks like a show designed for the kids yet it’s too raw for most adults. It is an optimal feature concept for Trey Parker and Matt Stone, the makers of TV’s South Park, as it frees them from working with actors. Parker and Stone do most of the voices, making me wonder if they found a way to collect multiple paychecks.  But I would hope that a lot of actors would choose not to even be associated with the Team America screenplay.

Fans of South Park want precisely the kind of movie Parker and Stone have given them. Shock comedy is just depressing. Who are you trying to shock? Movies like Tropic Thunder turned me off to ‘edgy’ American comedy, where the rule is that anything goes for a laugh. Of course, all I have to do is look the other way. If I were eight years old, however I’d really want to see Team America: World Police. The thought of kids watching this is not pleasant. 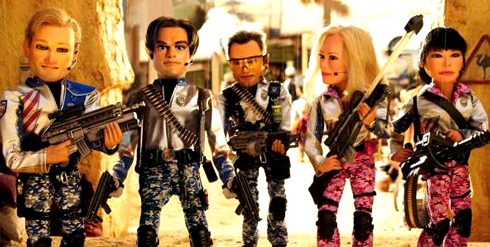 Right in the middle of the Iraq war, the crazy comedy Team America chooses to make light of the War On Terror, through juvenile action cinema. The screenplay posits a scenario in which the evil Kim Jong Il of North Korea is using fanatic Arab terrorists to further his own ends. The only opposition to utter chaos is Team America’s World Police, an invitation-only group of crack pilots and action heroes that can fly across the world in minutes from their secret headquarters in Mount Rushmore. The team recruits Gary Johnston, the star of Lease, a feel-good Broadway musical about AIDS. He has a hard time adjusting to the team, but eventually beds one beautiful member. Another Team America hero hates Gary, who quits after a failed mission. Kim Jong Il manages to capture Team America and wipe out their high tech vehicles. It’s eventually revealed that the evil Korean has enlisted the pacifist wing of the Film Actor’s Guild, or F.A.G., in his nefarious plans. Puppets representing Alec Baldwin, Sean Penn, Matt Damon, etc., distract America with a stupid awards show while Kim’s terrorists plant bombs in every city on the globe. But Gary comes to the rescue in the nick of time, saving the day with his amazing acting skills.

The film is also a musical. Trey Parker and Marc Shaiman wrote most of the new songs. “Everyone Has Aids” is what we see of the Lease stage show. The rousing “America, F**k Yeah” plays whenever the team rolls into action. The Arab terrorists have their own song, Kim Jong Il has a showcase number to wail about being lonely, and action movie training montages are parodied in a tune called “Montage.”

The basic setup is of course a parody of Gerry and Sylvia Anderson’s juvenile Thunderbirds show from ’60s TV, the one in which puppet rescue heroes fly around the world in fantastic toy rockets and super-planes, helping people and fighting various comic strip bad guys — often sneaky Asians and Arabs. The show became a pair of feature films in the late 1960s, and a live-action feature just the year after Team America. 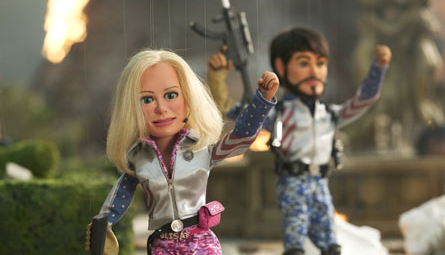 What makes Team America marginally watchable are its marvelous retro effects. Just as South Park reduced the art of flat animation to minimal absurdities, Team America apes the ‘SuperMarionation’ style and technique of Thunderbirds but is far more lavish and inventive. The production designers and Art Directors created dozens of puppets and over a hundred miniature sets. The character puppets are given much more flexible puppet faces. Their static expressions are of course funny, but at times they can mimic actorly performances. No attempt is made to hide the strings, embracing the artifice. They make jokes about everything else, but I don’t remember any humor referencing the visible strings — when two puppets have sex, they don’t get tangled up. The opening joke is a good one.  The movie begins in Paris, with a crude puppet dancing in front of a crude Eiffel Tower.  A camera pullback reveals that it’s a puppet show in the park. A marionette is puppeting a marionette.

Given special billing way down in the credits are the Chiodo Brothers, Charles, Edward and Stephen, terrific artists and cinematic effects problem solvers from way back. Their work directing and supervising the puppets on this picture should have made them stars. Also noted is the late Joe Viscocil, who was one of the original effects gang on Flesh Gordon. Joe was well known to the effects community, especially for his miniature pyrotechnics. This film’s spectacular effects scenes are mix of the classy and the purposely klunky. Trey Parker called it “SupercrappyMation.” Gerry and Sylvia Anderson simply concentrated on the toys, but Team America is directed like a Jerry Bruckheimer or Michael Bay action spectacle. The dialogue scenes overstate every silly dramatic and emotional moment. After a big buildup, Gary’s ‘Arab disguise’ is revealed as a ridiculous mess of glued-on facial hair and caked darkface makeup. 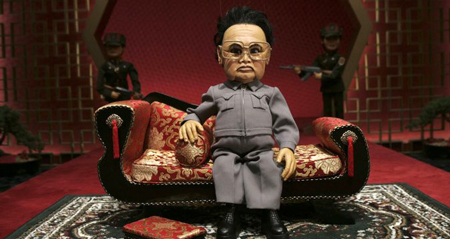 Irreverence and outrageousness has always been Parker and Stone’s whole game plan. These guys have a great sense of humor, pretty much ruined by their compulsion to shout F**k, Pu**y, D**k, S**t and a**hole in a crowded theater, ad infinitum. This appears to be the short cut to instant comedy success, especially when combined with situations that would appeal to a sexually obsessive 14 year-old that gets his comedy cues from Internet porn. Not all the humor is gross. The jokes about the silly relationships of the ‘Thunderbirds’ characters are the most successful. The problem is that Team America reminds me of the sick neighbor kid whose idea of a good time was to strip his sister’s Barbie doll and play obscene games with it. That’s your target audience.

“Well, duh…” Yes, the whole point of this humor is to be silly-stupid and grossly insulting, to everybody, including the audience. This is supposed to be liberating.

In general, I think that making a travesty of world terror politics is not necessarily a bad idea; that’s my particular bias. The mechanism of satire breaks down here because all Parker has going for him is a bag of scattershot political and ethnic slurs. Team America has a real hateful streak. Anybody taking offense is surely a square that doesn’t get the joke: “Irresponsiblity means never having to say you’re sorry.” The movie pretends to critique American action spectaculars but ends up celebrating their values. Team America wipes out Paris to kill a couple of gunmen, destroying several famous landmarks. But the movie places no value on anything. Its depiction of grossly stereotyped Egyptians and Panamanians has definite Bigot Appeal. The excuse, “we’re just playing with stereotypes” doesn’t wash, because the writers have nothing to say. The key is the song “America, F**k Yeah!”  On the surface it critiques the mindless aggression represented by Team America. In action the song is really chanting, “Hooray America, and f**k everybody else” — without irony. Give a movie audience the right anthem, and they’ll become whatever kind of mob you want. I can easily imagine drunken high school thugs singing this song as they beat some foreigner they’ve cornered on the street. The 37 repetitions of the word F**k at least kept the song off the radio — maybe that’s something to be grateful for. 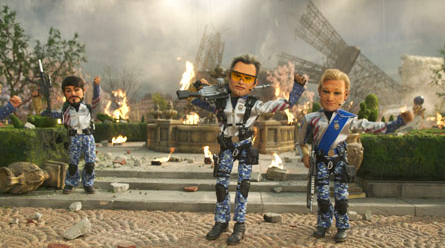 North Korea hacked Sony last year, reportedly outraged over The Interview. I’d have thought that the pointed insults of Team America would have motivated much harsher retaliation, ten years earlier.  America’s answer to this problem of cultural warfare was basically to say “F**k yeah!:  when theaters tried to replace The Interview with Team America, the studio overlords had to intervene.

But the attack on Kim Jong Il is nothing compared to the movie’s onslaught against Hollywood liberals.  No real-life conservative individuals are depicted, but a dozen name Beverly Hills activists are slammed as outright traitors, dupes helping Kim Jong Il conquer the world. Adding injury to insult, the puppets representing the stars are blown to bits in gore scenes. Michael Moore, who I don’t particularly wish to defend, is caricatured as a total jackass. Team America pushes an agenda that the right wing would endorse:  1) kicking butt around the world as Team America is just fine. 2) foreigners are stupid and irrelevant. 3) it’s okay to mercilessly provoke a grotesque, unpredictable tyrant in a foreign country, one who wants to get his hands on nuclear weapons. 4) Hollywood liberals are disloyal phonies selling out to foreign interests. These aren’t minor themes, but solid take-home messages. Assuming that Alt-right folk love hearing obscenities, Team America is right in tune with their values.

Back in 1968, when movies were taking a radical swing to the left — the new ratings system was just in force — a minor French movie was produced called Mr. Freedom. It’s an un-subtle superhero spoof with but one joke — America is a criminal nation, wiping out innocent people around the globe for profit and demanding that countries like France accept its decadent values. Mr. Freedom is a combination sports jock and jet pilot, and he plans to nuke France to save it from the commies. The movie starts out well and soon becomes tiresome — the wit runs out. I resent movies that pander to my outlook, even when I’m sympathetic to the message. Team America: World Police fulfills its goal. It finishes as thoughtless, exploitative, ugly and empty. It’s depressing to see all this talent and creativity go into a show whose ultimate message is, ‘everything is s**t.’ 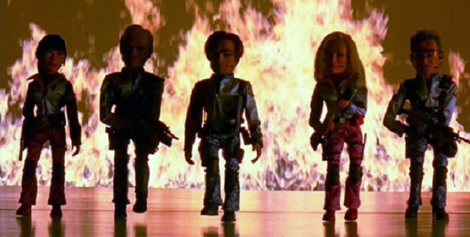 Warner Home Video’s Blu-ray of Paramount’s Team America: World Police is a handsome encoding of this bright and colorful show. Having worked with miniatures, I enjoyed the production team’s impressive achievement — there seems no compromise at all with the limitations of filming miniature sets and puppets 1/3 full size. The audio is excellent as well, with the catchy songs coming across at full strength.

Audio tracks are present in French and Spanish as well. No extras are included. This release is rated “R,” but I’ve heard mention made of an unrated version for video. Is this disc mislabeled, or is there a raunchier version out there?  Perhaps some things we were meant not to know.

I’ve put this under the Warner Archive banner because it’s being sold on the WB Shop page. For about a year now Warners has been distributing some of Paramount’s back catalog of titles, DVDs and Blu-rays. Let’s hope we see Blu-rays of Alfie, Danger: Diabolik and Funeral in Berlin.