What’s the right thing to say about a closeted movie career in an industry that feeds on gossip? There’s plenty to say, if you’re Tab Hunter. The ’50s heartthrob breaks his silence with a remarkably candid and positive account of his astonishing, unique Hollywood experience. 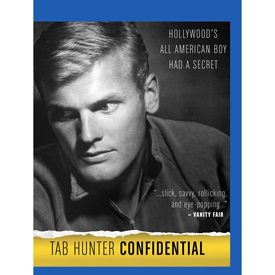 A year or two back I caught part of a documentary on TCM — I’m afraid I don’t remember its title. One sequence was fascinating. A rapid series of selected film clips chose moments from Tab Hunter films in which, out of context, everything Tab does or says seem to be saying, ‘I’m really gay.’  Today’s cynical movie game of detecting coded content gets a heck of a workout, as all of Tab’s innocent smirks, eye-rolls and pauses suddenly take on a second meaning. In one string of similar bits, Tab says he and another guy are going off alone and leaving a woman behind. That’s such a common moment in westerns and war movies, with any and all male stars, that a hilarious compilation might give the impression of an all-encompassing gay universe. I only saw about fifteen minutes of that unidentified docu, but I came away with the feeling that Tab Hunter had been tacked to a board like a butterfly specimen, and was being probed for hidden signals that we moviegoers would have seen a long time ago, were we not so clueless. 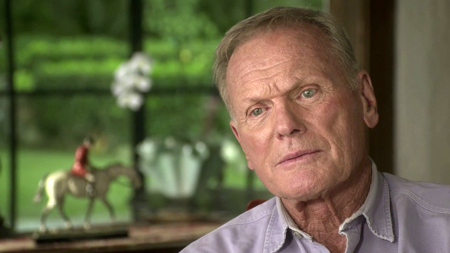 The interview documentary Tab Hunter Confidential has similar moments, but its more rounded approach presents the handsome 1950s movie star as much more than a whisper about his sexuality. Tab Hunter never officially came out, that I can remember; he instead morphed from a plastic teen heartthrob on contract to Warner Bros., to an actor-personality making his way forward without scandal, embarrassment or dishonor. Some of his contemporaries became jokes, or kooks, or self-destructed from Hollywood-related stress. This docu is ‘up close and personal’ but also insightful. Confidential goes for the inside story but also the big picture. We get a fair look at Hollywood politics as well as the men and women in Tab Hunter’s life.

It’s all centered on a long life-story interview with Hunter, which examines his career highs and lows and his love life. The end credits reveal that the film is an inside job co-produced by Hunter’s life partner. With many another actor that would be documentary poison. Just as a home video company will sanitize any less-than-positive content in a ‘docu’ about their product, a docu produced or controlled by a celebrity is almost guaranteed to be self-aggrandizing fluff. Tab Hunter’s personality puts that problem aside immediately. He comes across as a rational, self-critical realist who was never in the dark about the weird contradictions in his Hollywood career, the act he had to play and the separation he had to maintain between his public and private lives. He strikes us as honest and candid. Of his first movie, he says, “My mom said my acting was LOUSY.” And he laughs because he knew he was lousy too. We like him immediately. 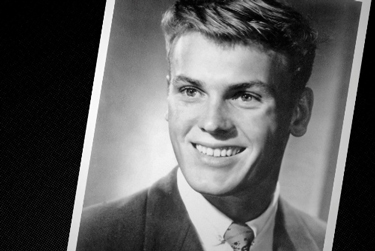 The first five minutes or so of Tab Hunter Confidential do not bode well — it’s a jokey, opportunistic montage of film clips with dialogue that comments on the opening narration. It’s amusing to see clips that seem to say, “I can’t act but doesn’t my hair look great,” or, “Here I’m kissing Sophia Loren but she might as well be a bar of soap.” But that’s only the prologue. When Tab starts to speak on camera the tone jumps to a high level of engagement and stays there for ninety minutes. At eighty-four years old he looks to be in impressive good health. He speaks to the camera with a sincere focus that tells us he’s thinking about what he’s saying. Ask the average bored celebrity a question about one of his movies, and he’ll rattle off the same three tired anecdotes. We get the feeling that Tab wouldn’t do that.

Tab’s story is fascinating. Yes, he was a client of an agent who ‘created’ pretty boy actors of the 1950s, the most successful being Rock Hudson… and he indeed renamed them all with new handles like Rock, Rory and Tab. Yes, Warners became interested in Tab not because of his acting but because his teen idol potential went through the roof. He was a bigger star in fan magazines than he was on the screen, and he had a surprise successful music career as well. The instant popularity of his (awful, awful) teen heartthrob 45rpm song hit convinced Jack Warner to pair him up with Natalie Wood for four so-so but popular pictures. Maybe it came rather easy, but for several years Tab consistently hit the career bulls-eye. 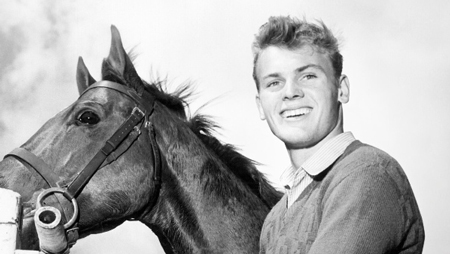 Hunter was caught in a minor scrape with the cops early on, and soon learned to keep his private life completely on the Q.T.. The big fear was the predatory scandal magazines. The studio’s publicity department ran interference for him on that score. A classic Hollywood Bachelor and ‘most eligible guy in town,’ Tab went on dozens of ‘Hollywood dates’ with actresses and starlets and proved a sincere nice guy and respectful date. After the photographers left, he’d take his date home and maybe go see a boyfriend. Tab’s lack of vices and friendly nature gave him an A+ reputation with his peers and employers. And his attitude wasn’t faked. He was enormously thankful that he could be a Hollywood actor. He laughs at the fact that Warners put him in so many roles as soldiers and sailors, but not because he was unsuited for them. He had dropped out of high school to join the Coast Guard.

Hunter had to have his head on straight to keep his double life in balance. He describes double dating with Natalie Wood in a double-beard charade. He wasn’t hiding some secret promiscuous life, and was actually more into long relationships. He met people riding horses and ice-skating. Everybody liked him because he was forthright about his work and his friendships. 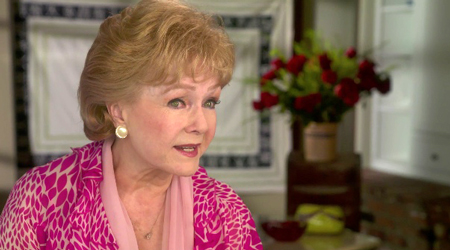 In his interview Tab Hunter projects a thoughtful attitude about his career ups and downs. To bribe Confidential magazine into staying hush-hush over a scoop about Rock Hudson, someone gave the scandal rag the story on Tab’s old police arrest. But his image was so squeaky clean that nothing stuck. A couple of years into his Warners contract, Tab was beginning to show real acting potential. He talks about his good experience in movies like Damn Yankees and Gunman’s Walk. He also tried his hand at live TV, where he did very well.

The personal material in Tab Hunter Confidential stays on a high plane. Hunter’s good performance in a TV play called Fear Strikes Out leads to a section about his relationship with Tony Perkins. They were a secret item for some time, until a breakup partly over what Tab considered a career betrayal. But there was also a basic difference between them. Both men had to be rigorously protective of their private identities, but Perkins seemed fundamentally guilty about his sexual preference and tried to suppress it. How weird could it be for these two, each pursuing a career as a romantic leading man and paired off with some of the world’s most attractive actresses? In the prevailing culture of the 1950s and 1960s, I’d think the stress of maintaining a secret identity while in the public spotlight would turn most people into neurotics. 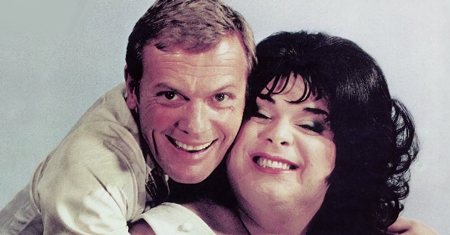 Hunter’s later story after leaving Warners is just as interesting. He talks about being replaced by the cookie-cutter pretty boy Troy Donahue, but without a shred of malice. There were bad film roles and dinner theater, which was profitable but stressful. We see plenty of evidence of Tab’s commitment to his mother and his worship of an older brother, who died in Vietnam. And then there is his discovery in the early ‘eighties by John Waters, an additional film career that he took on with the same pragmatic good humor. Many celebrities with long careers are capable of candid and honest interviews, but Tab Hunter seems especially free of illusions about himself or his life as a movie star. He reserves the right to be selective about what he does and doesn’t make public. The show is not a tell-all, a confession or a moral rant, and what we get is highly entertaining and illuminating.

Director Jeffrey Schwarz comes out of the world of home video added value productions. Of a number of long-form movie-related docus, this is probably his best yet. Tab Hunter’s personality does much of the work but the organization of ideas in the show is excellent. The docu makes use of great stills from Hunter, spread across the years and a million personal appearances and publicity shoots. There is also a judicious use of clips from many movies, and kinescope bits from his TV dramas, most of it new to this reviewer. Tab Hunter acting opposite Jo Van Fleet? Who’d have thunk it? Tab Hunter Confidential is really good — it’s a Hollywood bio and an engrossing personal statement. It’s also the first show I’ve seen that gives a comprehensive, unsensationalized picture of celebrity and sexual preference issues in classic-era Hollywood.

Hunter wrote a book last year with Eddie Muller, but this docu doesn’t play like a tie-in production. 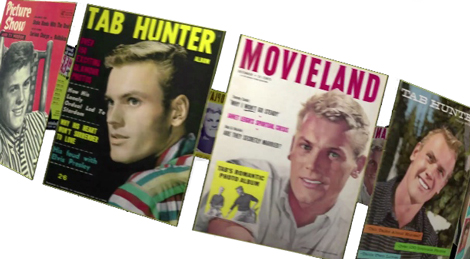 FilmRise’s Blu-ray of Tab Hunter Confidential is an excellent encoding of Jeffrey Schwarz’s overachieving Hollywood bio. The new interviews look great, and many of the stars (the list is above) have thoughtful things to say. We only get a few moments with some personalities — Clint Eastwood acted in a Tab Hunter movie but pointedly restricts his thoughts to Tab’s love of horses. Other celebrities show their love and admiration for Tab, while a selection of former teen fans and contest winners testify to his overpowering appeal.

A few of the video clips of films are soft and dull, which is odd because they all had to be licensed; perhaps the studios wanted to tack on big charges for high quality sources. (This is just a guess, I’ve worked with producers who ran into that problem). Michael Cudahy’s music score is great, except maybe for a sentimental passage at the end that seems out of keeping with Hunter’s warm-but-unfussy personality. I was expecting the film clips to avoid music licensing issues when a piece of  “Whatever Lola Wants” from Damn Yankees showed up. What’s my personal opinion of Tab Hunter’s acting? When he gets a chance to show his sincerity and nice-guy qualities, he’s fine, and in Damn Yankees I think he’s perfect.

The Blu-ray screener I was sent does have one flaw. Hunter had what appears to have been a serious romance with Etchika Choureau, his co-star in Lafayette Escadrille. The producers found Ms. Choreau and have almost a minute of her speaking on-screen, but her French isn’t part of the English subtitles encoded on the disc. Now I have to wait until my wife can watch the docu with me, to see what the French actress has to say about that rascal Tab.

Extras include a trailer, and a large section of uncut interview outtakes.