Just when we thought the world was doomed by the rejection of scientific rationalism, this lecture docu about the theories and discoveries of researcher Lynn Margulis gives us hope again. Formerly denounced as a scientific radical, Margulis’ ideas supplant the established ‘Neo-Darwinism’ notion of natural selection through competition, with the idea of cooperation on the level of cells and bacteria. For those of us educated in the old ways it’s a real eye opener; John Feldman’s fine direction makes these important scientific concepts easy to understand. 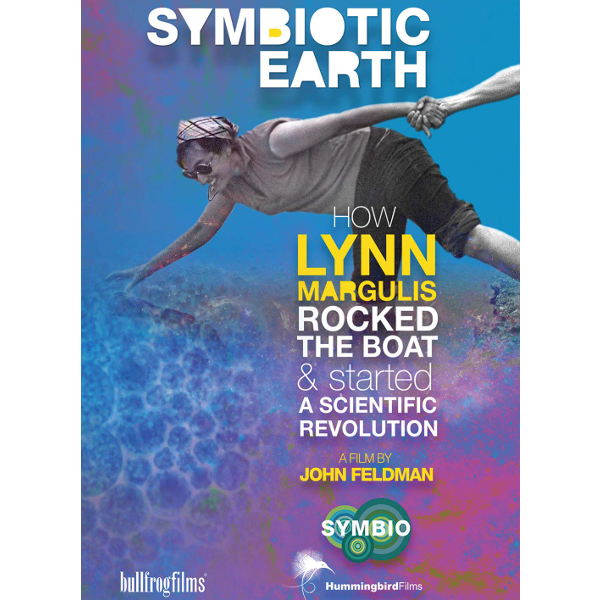 The positive message of this science-oriented attraction doesn’t need a sensational hook to get our attention; it gives hope to the idea that healing science can solve our planetary ecological problems. A typical TV show would sensationalize the subject, giving the impressive Lynn Margulis an ‘attitude’ and presenting her as a feminine firebrand with her fist in the air, come to sweep away the false idols of the male scientific establishment. The lengthy but engrossing scientific essay instead takes its time as it convinces us that Margulis is a revolutionary figure, whose arguments and reasoning comprise an alternative to old school science and inert ‘accepted’ theories.

The first couple of minutes of Symbiotic Earth barely hint at the revelations to come. Filmmaker John Feldman explains why we’re watching what we’re watching in his first chapter, “How Lynn Margulis Coerced me into Making this Film.” By the twenty-minute mark we’re on Feldman’s side, wondering why Ms. Margulis isn’t a household name. Knocking down idols and overturning dogma is for for the bold and the brave, especially in the halls of scientific academia. She was once called ‘Science’s Unruly Earth Mother,’ and not always respectfully.

Ms. Margulis passed away in 2011. In the middle 1960s her ‘Endosymbiosis Theory’ was already proposing that evolutionary changes come through symbiotic cooperation, and not the competitive biological warfare envisioned by the established ‘Neo-Darwinians.’ She cast doubt on the all-importance of DNA in species development and evolution, proposing a more cell-based theory. None of this sat well with the scientific powers-that-be that enforce dogma by regulating what is and is not published in the important scientific journals. Margulis didn’t back away from the fight: she maintained that Neo-Darwinism was the product of a white male scientific establishment that had re-thought the evolutionary process in terms of social and political forces, in her words, “wallow(ing) in their zoological, capitalistic, competitive, cost-benefit interpretation of Darwin.” In conjunction with the major scientific innovator James Lovelock, Margulis expounded the ‘Gaia Principle,’ the idea that Earth’s entire biosphere is a synergistic, self-maintaining organic system that regulates the planet’s ability to maintain life as we know it. We see Margulis dip her hand into a mass of tidepool scum, declaring that the basic building blocks of the system are all right there. Cells and bacteria combine and recombine, borrowing parts and functions from each other in a way that she believes is fundamentally cooperative, not competitive. The neo-Darwinian slogan ‘survival of the fittest’ is an outmoded idea used to support an aggressive, competitive philosophy of human behavior, the notion that Man is the Lord of a conquered natural domain. Envisioning the working of nature as unending bio-warfare, Neo-Darwinism excuses and encourages the selfish exploitation of the environment and the destruction of species. As I in no am way a scientist, a disclaimer is in order. I doubt that my understanding of the above is insightful, or even fully accurate. Symbiotic Earth presents Ms. Margulis’ mind-opening concepts in a logical order, backed by excellent scientific photography and micro-cinematography; the exact cell functions and bacterial behaviors described by Ms. Margulis happen before our eyes. She appears on camera in old filmed and videotaped speeches. We hear quite a lot from her long-time scientific colleague Lovelock. The show even has some bites from Margulis’ critics, even a naysayer or two.

Narrator Feldman takes the time to show how strongly these progressive ideas were resisted by the scientific establishment. Being a woman was an additional barrier in the status quo; some of the most prestigious authorities dismissed her theories as nonsense without even reading her papers. More than one established scientist who later embraced Endosymbiosis and Gaia admits that he did exactly that. We learn that some pundits attempting to discredit Margulis claimed that her unorthodox ideas were Marxist. One attack used fuzzy thinking to declare that her theories sought to upend science in favor of creationism. This sounds like the academic equivalent of being accused of heresy. Ms. Margulis instead comes off as a scientific heroine proposing a new age of human-ecosphere harmony. Symbiotic Earth is broken down into a number of chapters, each clearly marked and indexed. The science revelations come on so strong, that I watched one chapter twice before moving on to the next:

Along the way we learn that Lynn Margulis was married to Carl Sagan in the ’60s and ’70s. In film clips she fronts a polite but dynamic personality, projecting a positive enthusiasm that has motived a generation or two of scientific minds. Symbiotic Earth’s account of her life and ideas is absorbing even to me, a casual science fan with a limited attention span. My son is a working biologist; he thought Symbiotic Earth was excellent in every regard. I was going to give him my review copy when I finished with it, but now I think I will buy him his own.

Bullfrog Films’ DVD of  Symbiotic Earth is an excellent encoding of what I would describe as an extended essay-lecture-lesson in video. The pace is perfect — not too fast and never boring. The archived speeches and presentations are always clear and easy to hear, but some are taken from the kind of ragged video used to record speakers at conferences, in other words, pretty crummy. The examples of micro-cinematography, as I said above, are excellent.

Symbiotic Earth demystifies science and biology. I imagine it could very well inspire students to consider a future in science studies. The show is doubly attractive in that its message is so positive: instead of the expected funeral dirge for a doomed planet, ranting against science crushed by regressive political and social forces, Lynn Margulis’ vision is filled with hope.