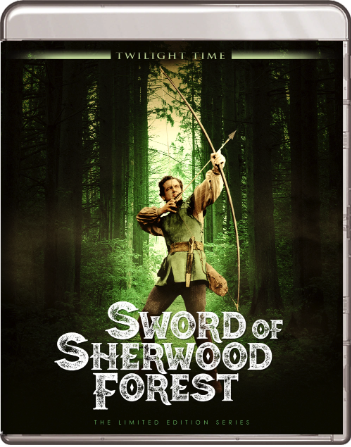 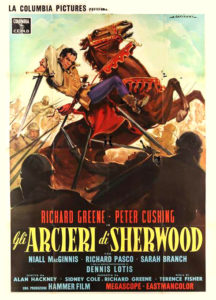 The prime architect for the gothic horror revival of the 50’s, Hammer Studios began the next decade with a revival of the less-than-fashionable swashbuckler genre by setting their sights on the legend of Robin Hood – but even with an audience-friendly runtime of 80 minutes, the lackadaisical Sword of Sherwood Forest may have the most ardent Hammer fan checking their watch.

Fortunately the action, what there is of it, plays out amid the ultra-green backcountry of Ireland’s County Wicklow and there are some very good bad guys lurking there – in particular Peter Cushing as the slippery Sheriff of Nottingham and Oliver Reed as a surly henchman who merely glowers from the sidelines but electrifies every frame he’s in.

Directed by Terence Fisher (sandwiching it between that year’s The Two Faces of Dr. Jekyll and The Curse of the Werewolf), the film was co-produced by its star Richard Greene just off a four year jaunt in The Adventures of Robin Hood, a syndicated TV show produced by Britain’s Sapphire Films and distributed by ITV, a company known for its tilt toward spirited Classics Illustrated fare like Ivanhoe and The Adventures of Sir Lancelot. 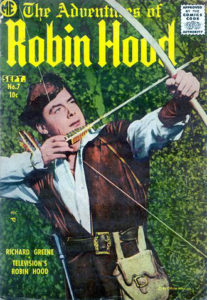 Sapphire Films was founded by Hannah Weinstein, a young activist and journalist who worked on Henry Wallace’s Progressive Party bid before fleeing to England at the Mayday moment of Joe McCarthy’s ascendancy. Happily for Weinstein, her budget-busting notion of a small screen Robin Hood had an enthusiastic supporter in ITV head Lew Grade.

The story of a renegade who robbed from the rich to give to the poor had a natural appeal for the determined expat – she made it a point of honor to hire blacklisted writers like Ring Lardner Jr. and Waldo Salt so they might pepper Robin’s adventures with sly allusions to authoritarian governments and unruly kings.

Though Greene’s Robin Hood found his roots in Weinstein’s defiantly lefty production company (it was co-funded by the Hollywood branch of the American Communist Party), the stalwart chaps of The John Birch Society can rest easy – the merry men of Sword of Sherwood Forest are not coming for our precious bodily fluids.

Save for the class struggle ingrained in any tale of the fugitive Saxon, no such politically-charged subtext is to be found in Alan Hackney‘s script for Fisher’s film – even though the cheeky young satirist would be responsible for one of the most scabrous political diatribes of the early sixties, I’m All Right Jack (starring Peter Sellers as a nasty little shop steward with communist leanings). 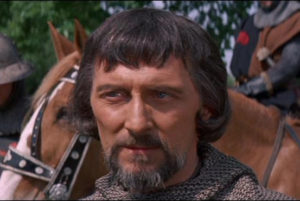 Pity Hackney, or any poor screenwriter, shouldered with the task of reinventing Robin – move the story away from the time-honored fable and risk the ire of the traditionalist, tread too close to the accepted folklore and jaded cineastes cry foul. As it is, Blakeley’s listless plotting is done no favors by Fisher’s colorless direction – the legendary characters are introduced in perfunctory fashion (you won’t find our hero swinging into frame ala Errol Flynn) and the meek storyline, a paper-thin plot to assassinate the Archduke of Canterbury, would be better suited to the TV show. 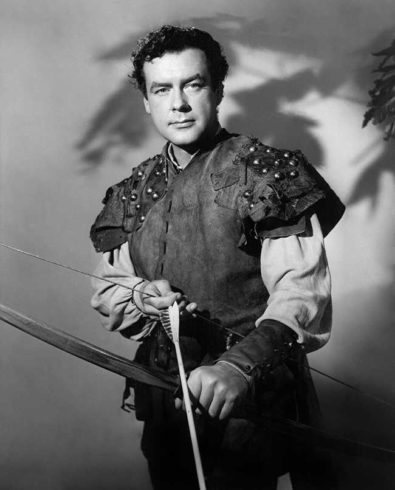 Richard Greene was a dyed-in-the-wool co-star even when he was given top billing – he never quite found the kind of stardom that would ensure a life of leisure until he hit pay dirt with the ITV series. The show, shot on 35mm and featuring a smorgasbord of Britain’s finest actors (including an early turn from director John Schlesinger), was broadcast not only in the UK but Australia, Canada and the United States. Its popularity spawned a near-Davy Crockett level of fan frenzy and merchandising grabs.

Greene’s winning nature, the inherent modesty that muted his presence in films like 1939’s The Hound of the Baskervilles, found its comfort zone on the boob tube – the small screen magnified his heroic profile and minimized his docile persona – for 30 minutes each week he happily conformed to the ideal of innocuous living room  entertainment brought to you by Wildroot Cream-Oil and Johnson & Johnson.

Sword of Sherwood Forest returned Greene to the big screen along with his shortcomings (he still couldn’t carry a movie) – he and his merry men seem more like affable soccer dads than woodland revolutionaries and aren’t particularly coordinated in their rabble-rousing efforts (unlike the stopwatch timing of Flynn’s team) while vivid actors like Nigel Green and Niall MacGinnis (as Little John and Friar Tuck) are but pale versions of their former selves – they nearly disappear into the background.

It’s left to the lingering threat from Cushing and his cohorts to give the film its only spark – though spotting busy Hammer actors like Richard Pasco (the tortured hero of The Gorgon) and Bond’s own “Q”, Desmond Llewelyn (as the mortally wounded gofer who sets the plot in motion) is its own fun. 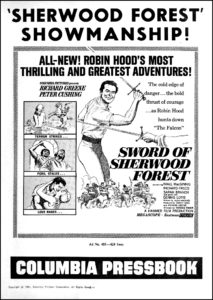 Sword had better than average Saturday matinee success at the bottom of a double bill propping up Carmine Gallone‘s sword and sandal epic, Carthage in Flames. After portraying Nayland Smith for Jess Franco in the soul-draining double-whammy of The Castle of Fu Manchu and The Blood of Fu Manchu, Greene skedaddled back to TV while Hammer would return to the occasional swashbuckler (this time with a sadistic twist) in The Pirates of Blood River, Captain Clegg and The Devil-Ship Pirates.

Twilight Time has come up with another beautiful looking Blu ray (though shoppers beware – the pricey disc comes with just a trailer) and cinematographer Ken Hodges (Peter Medak’s The Ruling Class) work is given a fine transfer.