It’s sweet, all right, not to mention sentimental and corny — as Adeline Schmidt, Irene Dunne leaves her father’s beer garden to sing in New York, where she falls prey to a predatory playboy. Set in nostalgic 1898, this Jerome Kern-Oscar Hammerstein II musical features several unfamiliar but marvelous songs. Dunne shows the film world the voice that brought her fame on Broadway — “Why Was I Born?,”  “Lonely Feet” — supported by Donald Woods, Louis Calhern and Dorothy Dare. Warners’ new restoration makes this a must see for Irene Dunne fans. 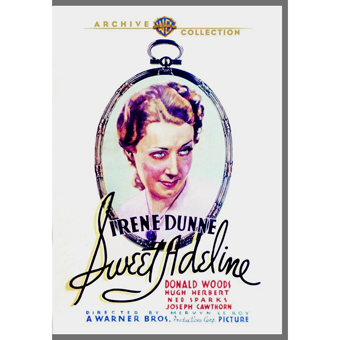 Two months after the Stock Market crash of 1929, New York must have been a grim place for many, but Jerome Kern and Oscar Hammerstein II’s upbeat musical romance Sweet Adeline was a success anyway. A backstage period piece set at the turn of the century, it was not considered in the same league as their earlier smash Show Boat, which had made Irene Dunne a star. The original stage Adeline was the famed singer Helen Morgan. 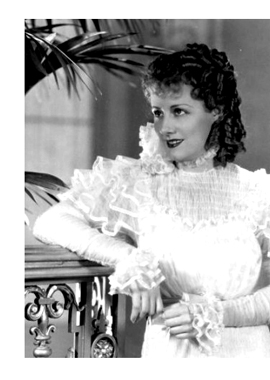 Five years later Warner Bros. adapted Sweet Adeline as a film musical, greatly rewritten and bolstered with several new Kern-Hammerstein songs. The feature didn’t do badly, especially with the popular Irene Dunne in the lead, returning to musical work. But clips from it never appeared in montages of old Hollywood, and the popular Dunne is no longer a household name. This only makes Sweet Adeline a more impressive discovery for fans of vintage musicals.

Back in the early ’90s I thought myself a fan of vintage song and dance movies. I had been exposed to several of the Busby Berkeley greats at UCLA, along with the innovative pictures Applause (Rouben Mamoulian) and Love Me Tonight. But I really hadn’t seen anything yet. When I started cutting video promos for MGM Home Video, I got a peek at impressive shows like The Cat and the Fiddle, where the songs are performed live, not to playback. Sweet Adeline was among them. Having grown up with a set of records of Oklahoma!, I could tell that some of the music sounded very much like that Rodgers and Hammerstein show. 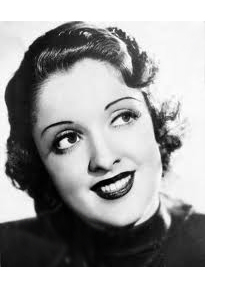 As directed by Mervyn LeRoy, Sweet Adeline is a clutch of show-stopping musical numbers in search of a better book. A couple of the songs will bowl over fans of Irene Dunne and Show Boat. The story is a thudding backstage musical with an espionage subplot (added just for the movie) made into unappealing comedy relief. It’s 1898 and the country is excited about the Spanish-American War. At the popular Hoboken, New Jersey biergarten (beer garden) of Oscar Schmidt (Joseph Cawthorne of White Zombie), the guests eat knackwurst, drink beer and bowl while entertainer Dot (Dorothy Dare) sings “Play Us a Polka Dot.” Schmidt ejects songwriter Sid Barnett (Donald Woods of The Public Enemy) on general principles — he doesn’t want his young daughter Nellie (Nydia Westman) or her older sister Adeline (Irene Dunne) to go to New York. But Nellie (Nydia Westman) sneaks out to the stage show of Dan Herzig (Ned Sparks), and when Adeline follows to retrieve her, Sid talks her into singing the ballad “Why Was I Born?”  Adeline takes the lead in the show, displacing Elysia (Winifred Shaw) and prompting investor Rupert Rockingham (Hugh Herbert) to withdraw his backing. But the gentleman officer and war hero Major Day (Louis Calhern) steps forward to pay the bills. Unfortunately, Day is more of a louse than a gentleman, as he expects Adeline to become his mistress. Sid loves Adeline but must stand aside as she is wooed by the suave Day. Meanwhile, Rockingham’s affections shift from Elysia to the more deserving Nellie. As it turns out Elysia is not only a spy for Spain, she’s insanely jealous, and plots to murder Adeline during a spectacular production number. 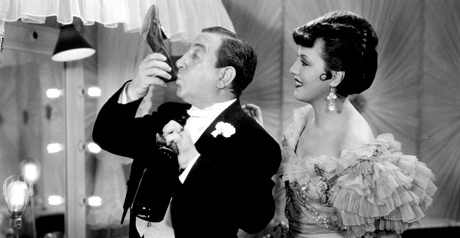 There’s nothing wrong with Sweet Adeline that a little rewriting wouldn’t fix. The comic Hugh Herbert doesn’t wear well at all, and the new spy subplot is underwritten. We can’t always tell when Herbert is trying to be funny. The Elysia character was apparently written to replace a burlesque dancer deemed too racy for this post-Code entertainment – and the name ‘Elysia’ does sounds more suitable for a stripper than a Spanish Mata Hari. The delightful Winifred Shaw has an inimitable singing voice, immortalized in specialty numbers from other movies, “The Lady in Red” and “Lullaby of Broadway.” Here she’s given no real songs and her vocal quality is made the butt of a joke.

The Adeline-Sid-Major Day triangle works much better, although Adeline’s motivations for leaving the beer garden, defecting to Day and continuing to be confused aren’t too clear. But the poised Irene Dunne is always enchanting. Like the young Frances Farmer, she glows with virtue and integrity; she’s how young boys imagine their mothers to have been when young. Dunne’s costumes sell the nostalgia factor, presenting the 1890s as a more innocent, desirable era. Viewers that can get past the B&W images are more likely to appreciate the wealth of talent on view. Dunne is the big star but Dorothy Dare’s film legacy is limited mostly to musical short subjects. She makes a polka seem like great fun. For a moment I thought that Nellie was the actress-comedienne Una Merkel, but no. The perky Nydia Westman is better remembered as an older actress, playing mothers and aunts in ’50s TV shows. 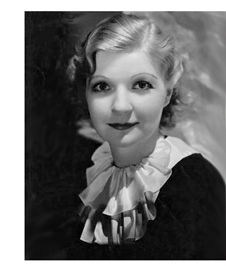 Donald Woods is the idealistic songwriter Sid, who only wants the simple things: fame, fortune, and Adeline’s hand in marriage. They have a nice musical moment when he’s thrown out of the beer garden: Adeline reads his new song “Don’t Ever Leave Me” from the torn pieces he’s left on a table. Louis Calhern’s Major Day is the pompous cad and opportunist. I wonder if his blunt suggestion of an illicit relationship was taken straight in 1934, or meant to be amusing in a nostalgic sense.

Sweet Adeline misses the mark now and then because director LeRoy doesn’t make his intentions entirely clear. The spy subplot comes to very little, as does Elysia’s villainy. One effective bit of LeRoy direction occurs when Sid must watch Adeline make a spectacle of herself at a banquet given by the predatory Major Day. She stands on a table to sing, and then falls / swoons into Day’s arms; Sid’s subjective view of the kiss makes it seem as if Day has already taken her to bed. The moment will strike a chord with anyone who has ever been mortified to see one’s romantic object kissing another man. 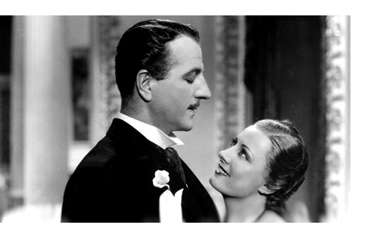 The storyline may be lumpy but most of the songs in Sweet Adeline are marvelous. Only two were part of the original stage show. Dorothy Dare’s “Play Us a Polka Dot” is an earworm novelty tune. Pa Schmidt’s “‘Twas Not So Long Ago”, sung from a moving Central Park hackney, nails the period setting fairly well. Dunne is given several ballads, starting with “Here Am I.” Her solo showstopper  “Why Was I Born?”  is the one song from the score that I’ve heard revived in a later context. Director LeRoy does the right thing and simply holds Dunne in close-up, interrupting for only a few cutaways to witnesses riveted by her emotive voice. Crabby Ned Sparks looks particularly affected.

What’s so special about these songs? I’ve long since stopped listening to pop radio, as all I’ve heard since the ’90s are wailing, melody-challenged power ballads. These love songs aren’t afraid to be sentimental and the lyrics have something to say. I especially like the intro lyric lines, before the main melody comes in. They’re like a little preamble-poem before the singer lets loose his/her full voice. Sure, old musicals have more than their share of lame, unmemorable songs. Sweet Adeline’s are mostly winners, customized for Irene Sunne’s wide vocal range.

The elaborate musical number “Lonely Feet” shows ‘Ensembles Director’ Bobby Connolly almost but not quite reaching Busby Berkeley quality. A mirror trick similar to that in The Fearless Vampire Killers (1967) and identical to one in Peggy Sue Got Married (1986) uses a double to play Dunne’s reflection, so that we can pass through the mirror into a big dance setup. The illusion is almost perfect, but on the way into the mirror world, an inopportune cut prevents the trick from finishing!  The song is impressive and the dance okay, but it never develops as would a Berkeley number — not enough angles, somewhat awkward cutting. One setup favors a water fountain that seems to be squirting up out of Adeline’s head. By 1934 Warners was avoiding outlandish, expensive set piece musical numbers. The emphasis stays on Irene Dunne. Her previous films had given her straight dramatic roles. Sweet Adeline steered her back to singing again, in Roberta and then in Show Boat.

Another song sees Adeline performing while suspended from a high swing, projecting out over the audience like Evelyn Nesbitt in The Girl in the Red Velvet Swing. At least twenty other girls in poofy white dresses (technical term) swing behind her, making pretty patterns in the background. Elysia cuts one of Adeline’s swing ropes when she’s high over the stage, a frightening scene that reminds us of The Phantom of the Opera.

Mervyn LeRoy’s most powerful film is still probably the killer social issue exposé I Am a Fugitive from a Chain Gang. He ends this show in a similar fashion, dropping the lights so that Irene Dunne’s last lyric line “Don’t Ever Leave Me” is heard over a darkened screen. Sweet Adeline may not be a front-rank show, but it’s really not bad, and the songs are marvelous. I recommend it to serious fans of musicals.

The very welcome Warner Archive Collection DVD-R of Sweet Adeline comes after twenty-four years of waiting; I’ve recorded the show from TCM at least five or six times, hoping to see it restored. I can finally get rid of the blurry old VHS tape from 1992. I think the show must have presented some daunting restoration problems, for the image is very good and the sound a tiny bit rough on the louder musical selections. It’s a vast improvement on older copies. We can appreciate Sol Polito’s glowing cinematography, and the orchestrations of the Kern-Hammerstein songs seem much richer.