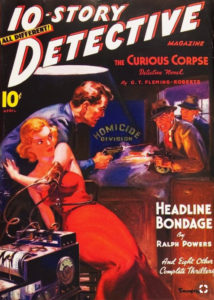 Turn of the century detectives typically dispatched the bad guys with handcuffs or handguns – commonplace but effective best practices. In 1938 the aptly named Action Comics flipped that script with a new kind of crime fighter.

This depression era RoboCop didn’t just brush off bullets – he snatched up getaway cars with one arm while corralling bank robbers in the other. And he flew. Written by Jerry Siegel and illustrated by Joe Shuster, the mysterious crusader was a high profile hero with a low brow reputation – in spite of his Olympian physique and matinee idol looks Hollywood remained dubious until 1941 when Paramount rolled the dice with a series of animated shorts. 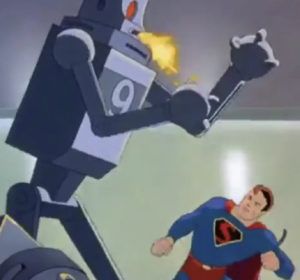 The 17th and final cartoon was released in 1943 – it would be another five years before eager audiences finally set their eyes on a living, breathing Superman. 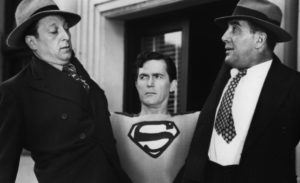 Directed by Thomas Carr and Spencer Gordon Bennet, the Man of Steel’s first live action adventures played out over 15 chapters beginning with the familiar origin story Superman Comes To Earth.

The series starred Noel Neill as reporter Lois Lane, Tommy Bond (the smirking bully Butch of the Our Gang comedies) as eager beaver Jimmy Olson and vaudeville hoofer Kirk Alyn as the self effacing rube who, by the way, could change the course of mighty rivers and bend steel in his bare hands.

Superman was produced by one of the movers and shakers of Hollywood’s poverty row filmmakers,  Sam Katzman – if Roger Corman “made a hundred movies and never lost a dime”, it could be said that Katzman made just as many and never spent one.

He perfected his frugal approach on serials like Shadow of Chinatown and Blake of Scotland Yard before overseeing prime cheese at Monogram like 1943’s The Ape Man starring Bela Lugosi. He joined Columbia in 1944 chaperoning the East Side Kids, Jungle Jim and, as the optimistic ads put it, “The Man of Tomorrow”. 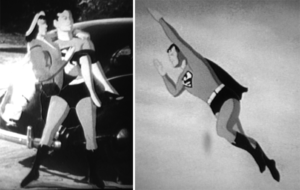 Katzman did have something in common with the Fleischers but it was a matter of economics rather than aesthetics. To cut costs the producer relied on traditional cell animation for Superman’s more super moments – flying sequences, spaceships, tornadoes and other special effects that would have burst the already tiny budget. The result is off-putting, bizarre and weirdly charming – as if Superman suffered a Jekyll/Hyde complex in which he devolved to his comic strip essence.

Alyn plays Kal-El of Krypton whose homeland explodes into a supernova just as his space ship escapes the atmosphere. The infant’s crib-sized craft lands not at Ellis Island but the farm of Ma and Pa Kent who raise young “Clark” to manhood – this wayfaring immigrant, a tiny stranger in a strange land, will soon be synonymous with truth, justice and the American way. 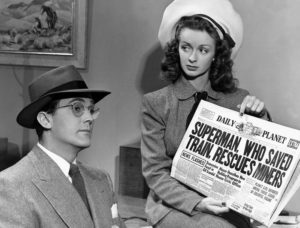 Once in Metropolis the still anonymous “superman” rescues workers in a collapsed mine shaft setting the stage for our hero’s split-level relationship with his secret identity – Superman makes news and Clark reports it.

The gambit leads to full time employment at The Daily Planet, a big city tabloid steered by scenery chewing Perry White, brilliant editor and cosmic blowhard. Across town a slinky villainess known as the Spider Lady is laying out a plot that will make up the bulk of the next 14 cliffhangers of the saga.

The episodes, each around 20 minutes in length, are even more simpleminded than the comics – though nuance was never the point in product meant to be consumed in an air-conditioned theater on a hot Saturday afternoon. Storylines for serials are typically structured as nothing but breathless action – or the prelude to that action – and the usual Hollywood attempts at garden variety movie-making – characterization, lively dialogue or compelling direction – are rarely part of the equation. Superman is no different. 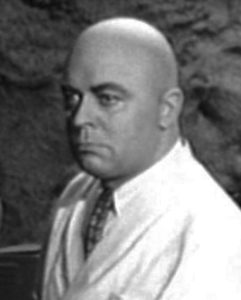 Except it was the most successful serial in movie history, costing $325,000 and netting over 3 million in ticket sales – even so, Superman was made to cool his heels for two years till his next appearance on the big screen.

The mad scientist comes equipped with an invisibility device that any nine year old would covet – any one of the chapter’s titles would hypnotize that same kid to return weekend after weekend – At The Mercy Of Atom Man, Atom Man’s Heat Ray, Atom Man’s Flying Saucers. What boy could resist?

Though Alyn and co-stars continue to struggle with basic emotions, the expressionless (mortified?) Talbot makes for an amusing Luthor, especially in his Atom Man get up, a sparkly Mardi Gras helmet and cape that he dons for literally no good reason (the super villain may need to get in touch with his inner party animal). 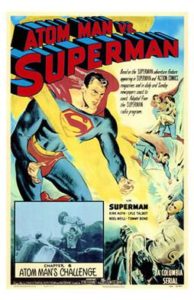 Atom Man  screened throughout the summer of 1950 – the next year George Reeves starred as the Man of Steel in Superman and the Mole Men (where Kal-El showed a band of outcasts the same compassion afforded him as a child). The film was a 58 minute try out for Superman’s TV debut, The Adventures of Superman with Reeves and newcomers Phyllis Coates as Lois and Jack Larson as Jimmy. Reeves’ bright smile and uncomplicated charm – the perfect older brother – eclipsed the memory of Kirk Alyn seemingly overnight.

Warner Archive’s DVD set, Superman Serials – The Complete 1948 & 1950 Collection, featuring both the 1948 and ‘50 serials, has just come back in circulation – the prints are a bit worse for wear and more than a bit grainy but the attraction for these 20 minute vacations from reality might actually be enhanced by their low-fi presentation.

The four disc set includes two short features on the final disc, Saturdays with Superman, a nostalgic look at serial culture, and Look! Up in the Sky!, an excerpt from what is essentially a promotional film for the lumbering Superman Returns.

Caveat Emptor – the non-stop action agenda for the Superman serials can be tiresome to say the least. Best to parcel out these choice bits of nostalgia in the way they were meant to be seen, once a week (and preferably on a Saturday afternoon).