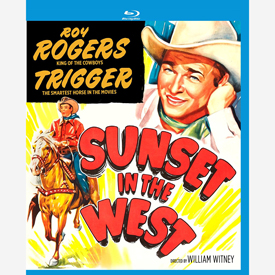 Westerns don’t get any sweeter than this colorful slice of innocence from 1950. Make way for the King of the Cowboys Roy Rogers, in this outing minus his queen, Dale Evans. I first encountered Roy on his ‘fifties TV show, each half-hour of which seemed to have about fourteen minutes of actual story, padded with intros, exits, and his theme song Happy Trails to You (which to me always sounded like an altered ‘Hawaiian’ song). The TV show seemed strange in that everyone dressed and went armed as if were 1880, yet Roy’s ranch had a jeep. I guess the ‘Roy Rogers World’ really takes place in prehistoric times, back “When the NRA Ruled the Earth.” 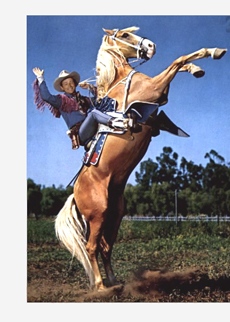 Republic was the happy home of perhaps the best serial westerns, not counting RKO’s Tim Holt and George O’Brien shows, that were in a different class altogether. Republic maintained its own corral of specialized actors and technicians, and had a curious history of swapping out leading stars as they became too popular (John Wayne) or too cantankerous. Roy Rogers, aka Leonard Slye, entered through a singing group called Sons of the Pioneers and by 1938 was a top singing cowboy.

Sunset in the West is a neatly scripted, smartly directed bon-bon of a show: good spirited, not too violent and squeaky-clean. Everyone wears brightly colored quasi-western duds, starched and pressed. Given second billing, Roy’s horse Trigger sports a full blonde mane so silky and soft, it looks as if Veronica Lake has been transformed into a horse. We swear we’re in the old West until somebody uses a telephone. Then we see a car in the background of a shot, and think that it’s a blooper. That explanation is then dashed by a scene that shows a modern truck being used to unload a train car. The setting is California, near the beach and the Mexican border, but the coastline is not at all developed. Is this some kind of Alternate Reality drama?

Roy Rogers plays himself, an affable ex-deputy just trying to get his cattle to market. He’s waiting at the rail siding when his appointed train roars by without stopping. Leaving his cowhands behind — they double as the singing group Riders of the Purple Sage — Roy goes into town to find that his old sheriff Tad (Will Wright) wants to quit because of a series of murders. The train has been hijacked by bad guys unknown. Roy volunteers to help straighten things out. Aiding Roy is Tad’s deputy Splinters, who is also a goofy barber (Gordon Jones), and Tad’s daughter Dixie (Penny Edwards), who smiles a lot and whose shirts are seemingly made from Italian restaurant tablecloths. Tad’s loyal bloodhound Sherlock helps out as well. 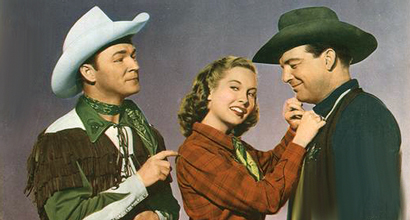 It’s easy to spot the bad guys, who are the only characters that have non-sunny dispositions. Although the off-screen killings seem rather serious, Roy tackles the problem as if everything will be settled before lunch. The script by Gerald Geraghty is actually quite charming. Roy prevails by staying observant and not losing his head. When the bad guys capture him, sheriff Tad shows some maturity and calls off the posse, because Roy might get hurt. The bad guys do the usual bonehead play of ‘killing’ Roy with their backs turned, so he can easily escape. Roy deduces the identity of the ‘Mr. Big’ behind the hijackings in a way that would seem brilliant to an eight-year-old. We knew from the first scene, when we met a superfluous ‘wealthy lawyer’ character. 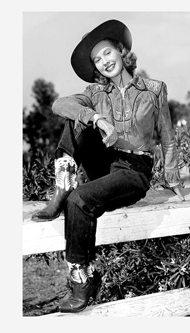 This is no point ‘n’ shoot western, with actors lined up as if for a Brownie snapshot. William Witney does an exceptionally good job blocking his players, moving the camera and energizing the screen across cuts. The fights are not padded or drawn-out, a common failing with Republic serials. Roy’s punch-outs are short and sweet, while the concluding fight sees the bad guys using grenades (?) and dodging dynamite blasts without getting a scratch. Serial westerns are usually 20% riding shots. Brevity helps here as well, along with good angles. That horse Trigger looks great in motion, and the second unit director stages some full-tilt run-bys that are quite dynamic, especially in color. Roy does his own riding in medium shots, and several other stunts, but is doubled for long-lens action.

Sunset in the West is no rush job, but crafted to be wholesome, ultra-safe kid entertainment by the standards of its day. I smiled indulgently at first, and then warmed to the care and effort expended. Director Witney handles the dialogue scenes so well that even the silly comedy relief is charming. ‘Splinters’ seems to get the hiccups every time he wants to shave a customer. The pronounced facial twitch of sniveling bad-guy telegrapher Blinky Adams (Paul E. Burns) is good for some laughs, although I can see it making problems on school playgrounds for similarly afflicted kids. A bad guy hits Tad’s lovable bloodhound Sherlock – and the dog garners more sympathy than any of the film’s gunshot fatalities. The dog pulls through. A fall-down funny scene shows Sherlock limping as he recovers — to make him limp, they’ve tied the bandage so he can’t move one of his legs properly!

Politically the film is neutral-neutral, although we do get a bit of law ‘n’ order rhetoric — the townspeople voice their anger at the sheriff, and the only thing he says is ‘this is an illegal assembly.’ No representatives of the press are depicted, but the newspaper headlines we see are all viciously slanted against the Sheriff, suggesting that newspapers are not on the side of Good. The bad guys are smuggling guns, for what purpose we don’t know. Roy and Tad must handle the crooks on their own, after a government agent (Charles la Torre) is murdered. We’re assured that if the agent’s message had gotten through, plenty of law enforcement back-up would have been on the scene in less than a day. It’s an odd detail in such a casual film, as if Republic had an unwritten mission to do positive PR for Uncle Sam. 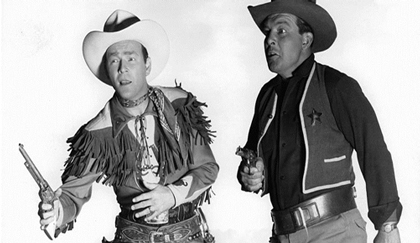 Sure, Roy Rogers is as bland as butter but his act here is very smooth – the screen Roy is always polite, good spirited and slow to be alarmed. He seems forever ready to recite the salute to the flag, with complete sincerity. Roy married Dale Evans in 1947 and she’d already become his co-star; we’re informed that she bowed out of this show because she was pregnant. They kept up the pretense that their western shows were exactly how they lived… I’m not sure that they appeared in public in any but western dress. Leading lady Penny Edwards has a winning smile but the show has no romantic angle, ’cause we’re supposed to think that Dale is still around somewhere. A bright spot on the cast list is third-billed Estelita Rodriguez, who plays the energetic, excitable dance hall hostess Carmelita. She regularly snitches to the Sheriff brings needed information to help Tad and Roy. Rodriguez is excellent, with a toned-down Lupe Veléz manner that’s not at all stereotypically offensive. Everyone plays to the bigger-than-life, slightly juvenile tone, enriching their roles. Gordon Jones has the slapstick part and is the only one whose shtick becomes borderline- tiresome. Ten years before, Jones played Britt Reid in Universal’s serial of The Green Hornet.

The title Sunset in the West sounds like a thematic statement, but it’s only a pleasant ballad sung two or three times in the picture. With or without Roy, the Riders of the Purple Sage just strike up a song now and then, as when they feel like singing while riding in a box car. Even more than Gene Autry’s movies, the Rogers films at this time convey an escapist feeling of postwar calm and complacency. Victory is ours, the rest of the world doesn’t exist and there are no problems except those caused by a few greedy individual bad guys, who apparently do what they do just because they’re bad. That attitude more or less stayed in effect through the 1950s, especially on TV. Sunset in the West may not be a cutting edge cultural statement, but it definitely expresses where America’s head was at in those days. It definitely makes me feel nostalgic for my sheltered childhood where everything seemed to be 100% secure. 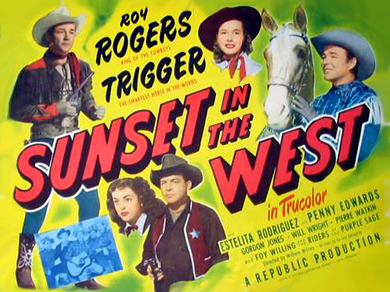 The KL Studio Classics Blu-ray of Sunset in the West looks really good. The elements are in fine shape, with only occasional shots apparently sourced from a slightly less perfect film element. The bright hues come via Trucolor, Republic’s in-house attempt to beat Eastmancolor to the market. According to expert Bob Furmnank, it’s in first-phase Trucolor, the three-color system. I’m no expert but I see no bright greens, and facial tones all look a little tweaked, as with Europe’s Agfacolor.  Since Sunset in the West is packed with bright clothing, a spiffy steam train, Roy Rogers’ blue eyes and that great-looking horse Trigger, we really appreciate cinematographer Jack Marta’s attractive images.

Kino offers a string of western trailers but none for Sunset. Quite welcome is a commentary by Toby Roan, who at first offers easy IMDB info, but he’s soon zipping off actor and crew bios that show a great deal more familiarity and insight with Republic westerns. He offers extensive background about the studio history and talks about the obscure actors as if he knew them personally. From what we hear, Estelita Rodriguez’s high billing may have been due to her relationship with the owner of the studio. As for Roy Rogers, we learn that he was a failed farmer who in the deeps of the Depression took a break from picking fruit to enter a singing contest. Practical and realistic about his career, and realizing that his popularity was marketable, Rogers seems like quite a reasonable guy. Roan’s appreciative words for director William Witney are also welcome. I know Witney mostly from the rather stiffly directed A.I.P. fantasy Master of the World, but this show is directed almost as well as a Joseph H. Lewis picture. Roan reminds us that Quentin Tarantino was a big fan of the director, and dedicated one of his movies to him.

I had to bow out before the finale but it didn’t sound as if Roan was going to explain how this film and the John Wayne picture Dakota (just out as well) ended as Kino discs, when almost all of Republic’s output has been released on Olive Films.