Here’s a real gem — a ‘classic’ Chekhov story turned into a compelling tale of lust and murder. George Sanders and Linda Darnell shine as a judge and the peasant girl who intrigues him; Edward Everett Horton is excellent cast against type in a dramatic role. 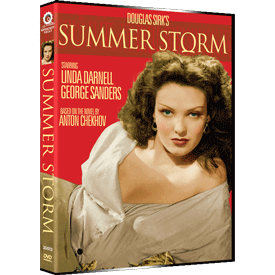 Douglas Sirk, born Hans Detlef Sierck, had a pretty amazing career. He’s an oft- overlooked refugee from Hitler’s Germany, who came late but landed on his feet and found an even better career in Hollywood. He was one of the first directors to be honored by the auteur theorists — I remember grad student Janey Place carrying Jon Halliday’s interview book with Sirk into Howard Suber’s class, around 1972.

With impressive stage experience and credits and credits on films with top German stars, Sirk came to Hollywood on one of the last boats out of Europe, thanks to a year’s contract from Warners to remake one of his German movies. Always a practical man, when no film assignment arose and Pearl Harbor scotched his plan to direct an opera in San Francisco, Sirk bought a chicken farm in the San Fernando Valley, to wait out the war. Two years, later, expatriate producer Seymour Nebenzal, a former German mogul at Nero Films and the producer of Fritz Lang’s classic “M”, was stuck making cheap movies at the little Producer’s Releasing Corporation (PRC). He hired Sirk to direct Hitler’s Madman, which proved a genuine miracle picture. MGM liked it so much that they bought it outright and brought Sirk along to direct additional scenes — giving him an immediate pass to the directing fast lane.

That success led immediately to Summer Storm, Nebenzal’s production through United Artists. The beautifully acted and directed film is a adaptation of a famous Chekhov story, shifted from the 19th century to the period immediately before and after the Russian revolution. It has a great role for George Sanders, as good as the parts Sanders was getting from producer-director Albert Lewin (The Moon and Sixpence, The Picture of Dorian Gray). And it gives a stunning starring role to Linda Darnell, a part very similar to that in her later Forever Amber. 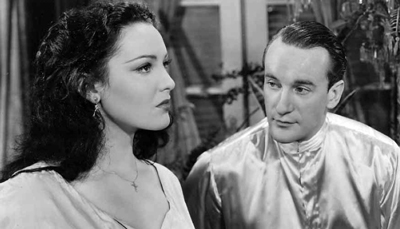 In Russia before the revoution, bored rural judge Fedor Petroff (George Sanders) and the shifty, selfish Count Volsky (Edward Everett Horton) while away their time chasing women. Both become obsessed with Olga (Linda Darnell), a schemer who twists them both around her finger, and continues to do so even after she has been married off to the peasant sharecropper Anton Urbenin (Hugo Haas). By dallying with Olga, Fedor loses his engagement to the fine, potentially loyal Nadena Kalenin (Anna Lee). Olga continues to pressure Fedor to run away with her to America, while also toying with the foolish Count, who she calls Piggy. With Urbenin’s marriage unconsummated and Olga philandering with one noble bachelor while stringing another along, something has to give.

Sirk, Nebenzal and co-writer Rowland Leigh pull off a minor miracle, turning a piece of classic Russian literature into a sexy potboiler without dishonoring the source. Judging by the posters displaying Linda Darnell’s legs, the picture was sold as a substitute for Howard Hawks’ suppressed The Outlaw, yet viewers discovered a compelling and satisfying story of interlocked desires. It even has a flashback structure: the story is told from a point after the Romanoffs have fallen. Having lost everything, Piggy and Fedor are starving in a cheap apartment. Piggy steals Fedor’s manuscript for a book and takes it to a publisher — Nadena Kalenin, who has never gotten over Fedor. The movie proper sees Fedor’s memoirs, which amount to a confession of murder, read by a very interested party. 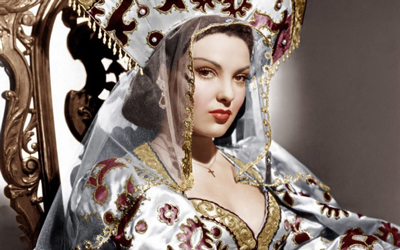 For a wartime independent, Summer Storm somehow creates a convincing period Russia, mostly on impressive interior sets. We see Piggy, a true fool, inviting the low-born Kuzma (Sig Rumann) to a dinner party, which leads to a scandalized walkout by another guest (Val Lewton’s statuesque Elizabeth Russell of The Cat People and The Seventh Victim). Before the war, Douglas Sirk had been asked to finish Jean Renoir’s French film A Day in the Country; here he tries to re-create a similar country picnic on a sound stage. Linda Darnell is treated as a dangerous erotic object, but without the emphasis on cleavage Howard Hughes gave Jane Russell. Although Summer Storm is a B&W movie, magazines carried glorious color images of Darnell in costume, looking alternately like a Ukranian princess, and a girl ready for fun in a hayloft. 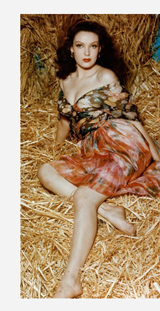 Called out for unanimous praise was Edward Everett Horton, a specialist in silly-ass characters in some of the best comedies of the ’30s and ’40s. Although he’s called Piggy and treated as a fool, Horton’s character is a serious lecher, a dishonest friend and the kind of snob that takes advantage of his high station in the Czar’s society. Horton was grateful for the chance to play something different, and he’s excellent. Sirk prided himself on casting against type now and then… his best known quote on Summer Storm, from the Halliday interview, is that Fedor and Piggy exemplify the reason a revolution was necessary.

Pulling supporting duty is Anna Lee, as usual shining in a thankless role. Hugo Haas had directed movies back in Czechoslovakia. Escaping to America, he got a foothold in Hollywood by smuggling out his film Skeleton on Horseback, a morbid allegory that presents Nazi-ism as an uncontrollable disease. Haas’ role in Summer Storm as an older man married to a younger, unsatisfied wife, would recur in a score of low-budget movies he’d direct himself in later in the 1950s, usually acting alongside Cleo Moore or Beverly Michaels. In Summer Storm the sight of Haas seated next to the suddenly regal-looking Linda Darnell makes their union seem all the more impossible.

Most interestingly, Summer Storm presents an ambiguous, amoral hero with whom we can still identify. George Sanders attracted kudos for his starring roles in the Lewin pictures, where he played cruel, selfish and ruthless men with a sardonic glee. For his two Douglas Sirk movies Sanders’ characters are flawed but likeable. Their next collaboration A Scandal in Paris is an even more ambitious, lighter romantic thriller about the famous Vidocq, the thief- turned detective.

It’s true that Sirk tried to write Summer Storm with James M. Cain, but gave up when Cain ‘Americanized everything.’ He chose instead the ‘very English’ Roland Leigh, who had contributed to Warners’ The Charge of the Light Brigade. Some accounts say that Anna Lee’s publishing office, set after the revolution, originally had photos on the wall of Lenin or Stalin, but they were taken out at the last minute. 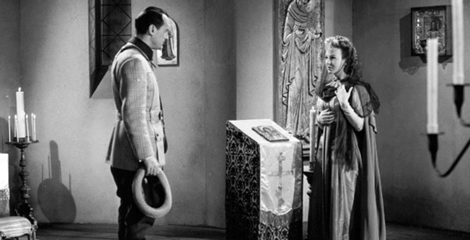 At this time Douglas Sirk could do no wrong. He did well with other non-celebrity German expatriates. At PRC, with the surprise of Hitler’s Madman, he caught the brass ring missed by the equally talented Edgar G. Ulmer. His excellent A Scandal in Paris was made with the independent producer Arnold Pressburger, who had just had success with Fritz Lang’s Hangmen Also Die!  Sirk would bounce around Hollywood, and go back to Germany for a season before returning to a modest contract at Universal. He finessed that studio relationship, and his collaboration with various producers, into a very successful ten-year run without ever becoming a ‘name’ director. The Universal years culminated in the intense soap operas that now seem so politically honest, the ones that are copied by directors like Todd Haynes in Far from Heaven and Carol. Without being a rebel, Sirk was able to make films his way. “Of course,” he said, “I have to go by the rules, avoid experiments, stick to ‘family fare,’ have ‘happy endings’ and so on.” But nobody said anything about subtextural subterfuge. 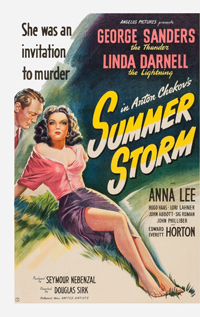 Sprocket Vault’s DVD of Summer Storm is a good transfer of this escapee from the Public Domain, now secured by Kit Parker. The titles look a little dull but most of the rest of the picture is in fine shape — I haven’t seen a better copy anywhere, and the transfer allows us to appreciate the fine work of cameraman Eugen Shüfftan, a refugee locked out of the Hollywood Guilds. There are still dozens of films originally released by United Artists in the 1940s, many of them ‘artistic’ efforts, and we have to be happy when their printing elements are safeguarded.

Toiling-in-the-trenches composer Karl Hajos did the film’s music, and was rewarded with an Oscar nomination. It’s something of a sight to behold George Sanders singing a lusty Russian song, with English lyrics.

For extras we’re given a trailer and an audio interview. Joel Blumberg interviews author Bernard Dick, who more or less lectures on the basic subject of Douglas Sirk. Dick is opinionated but thorough.

The disc is released by Sprocket Vault, but it carries the same logos, etc., as the older VCI release from 2009 — so I’m guessing it’s the same exact pressing.