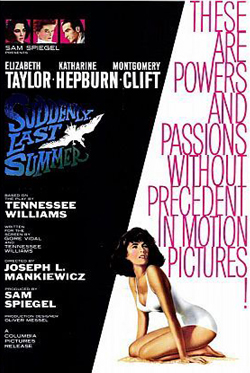 Katharine Hepburn wants niece Elizabeth Taylor to get a lobotomy to protect the reputation of her dead son. A troubled production denounced by screenwriter Gore Vidal and author of the original one-act play Tennessee Williams, Joseph L. Mankiewicz’s baroque Southern Gothic was a surprisingly potent boxoffice attraction due to the stars and a somewhat salacious ad campaign. Given the restrictions of the production code, the Catholic Church gave a surprising pass to the intimations of homosexuality interwoven throughout the film’s two hour running time.