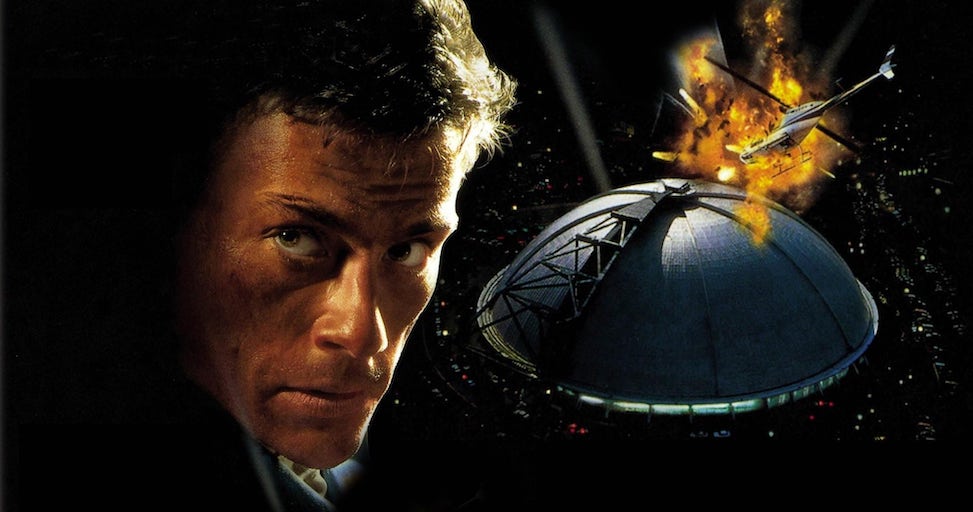 A homicidal hockey mascot. A firefighter-turned-fire marshal-turned-Stanley Cup Finals goalie. Lethal gym equipment. A magnificent helicopter escape plan. Lots and lots of roundhouse kicks. All of these elements and more make Sudden Death, released on this date in 1995, the most glorious action extravaganza of superstar Jean-Claude Van Damme’s career.

Essentially Die Hard At A Hockey Game, Sudden Death tells the tale of divorced former firefighter Darren McCord (JCVD), who, after a workplace tragedy, has become a fire marshal at Pittsburgh Civic Arena. For his young son Tyler (Ross Malinger)’s birthday, Darren is bringing Tyler and daughter Emily (Whittni Wright) to the office. The occasion? Game 7 of the 1995 Stanley Cup Finals, an imagined rematch of the 1992 Stanley Cup Finals bout between the Chicago Blackhawks and the Pittsburgh Penguins. Vice President Daniel Binder (Raymond J. Barry) is in attendance with a prestigious entourage in a skybox.

Of course, it wouldn’t be much of a Die Hard scenario without a slick heist, and this one’s a doozy. Cultured, brilliant ex-CIA operative Joshua Foss (Powers Boothe) leads a distinctive gang of mercenaries in holding the VP and 17,181 rabid hockey fans hostage with a series of bombs set to detonate at the end of regulation in this final game of the season, unless Binder can have the federal government wire Foss oodles of cash that his team will then offload to a series of offshore bank accounts until they become impossible to trace. What Foss hasn’t count on is… the game going to a sudden death overtime period!

Foss’s ruthless lieutenants execute a series of complicated schemes accounting for almost every eventuality — save for the resilience of a certain peskily death-averse fire marshal. Soon, much as John McClane did before him, McCord is coordinating his efforts with a team of good guys on the outside — this time, it’s the Vice President’s Secret Service detail and local police. McCord creatively maneuvers his way through most of the mercenaries’ best-laid plans. When young Emily is taken hostage and plopped into the vice president’s luxury suite, the action really kicks into high gear, and we are treated to the aforementioned set pieces involving killer workout paraphernalia, a certain ex-high school goalie being inadvertently called into action for the Stanley Cup Finals, and of course a bloodthirsty Iceburgh the Penguin during an outrageously fun culinary showdown.

The action in this movie takes the Die Hard blueprint and peppers in the zany inventiveness of a good Looney Tunes short, while employing Home Alone levels of cleverly violent applications for previously banal everyday items (you’ll never look at a deep fryer or a chicken bone the same way again, for example).

Sudden Death, directed by the versatile Peter Hyams (also responsible for Timecop, 2010: The Year We Make Contact, and Relic), is perhaps the ultimate JCVD movie, simultaneously simple yet expertly executed. It moves at a ferociously delightful tempo, and cheerfully checks off every possible box for an over-the-top thriller of its era. Gene Quintano’s original screenplay for the film was adapted from a concept by Karen Elise Baldwin, the wife of then-Penguins owner Howard Baldwin, who co-produced the project. So, naturally, the Penguins are the home team. 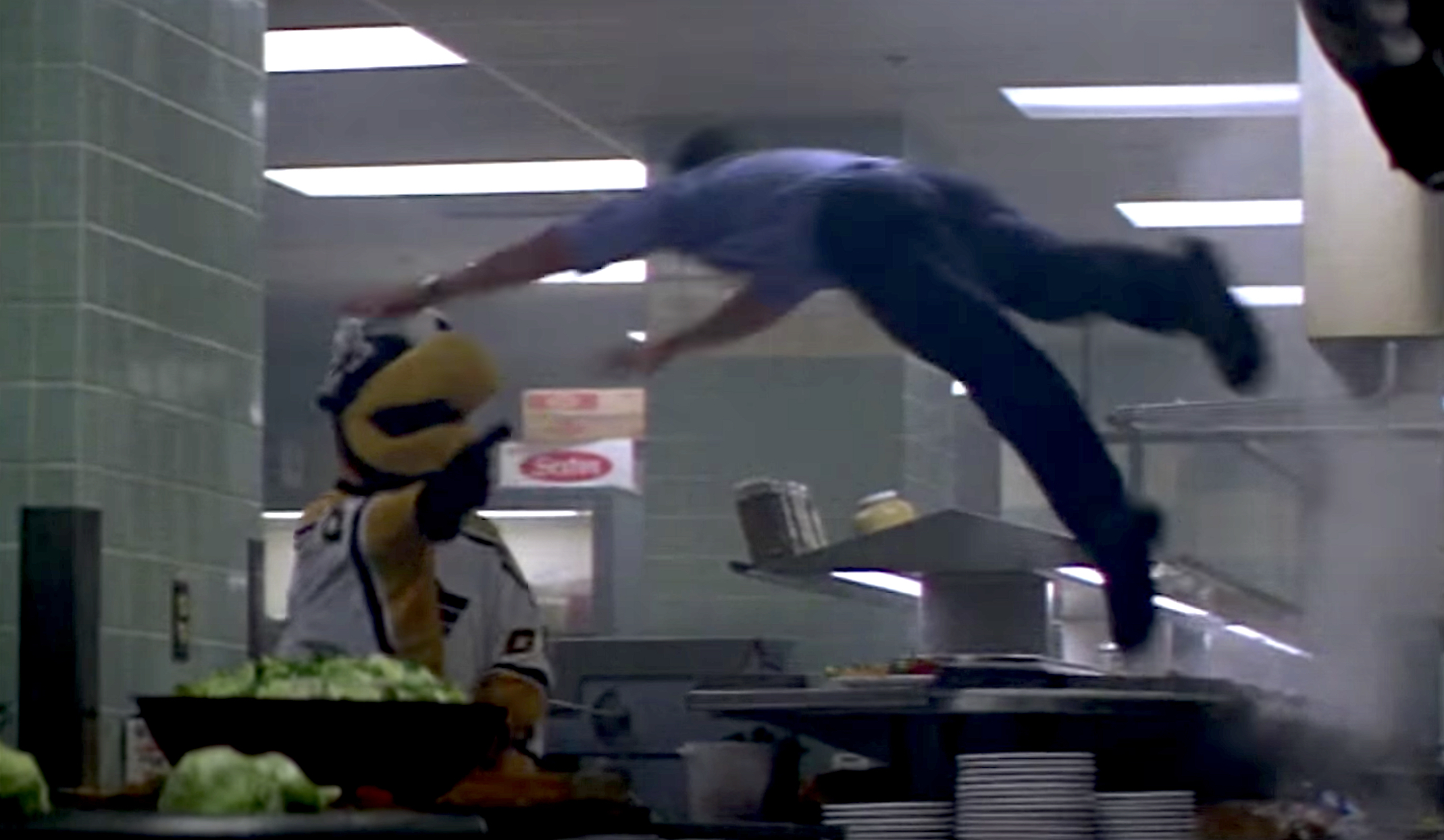 Universal’s home video production wing, Universal 1440, released a sequel/pseudo-remake, Welcome To Sudden Death starring Michael Jai White, to VOD and streaming platforms earlier this year. The action here is transferred to a basketball opening night game with a fake team (the Phoenix Falcons — with the Atlanta Falcons’ logo) from a Stanley Cup Finals Game 7. As in the original, a heroic arena security guard has to save his kids and some political bigwigs — this time joined by the new team owner —  from a jilted former operative holding everyone hostage in a greedy act of retribution. The only downside to this is that, unlike hockey, games that are tied at the end of regulation don’t go into sudden death penalties, they go into overtime. Sudden Death: Overtime would have sounded pretty weird as a moniker, though.

Michael Jai White is typically awesome, and there are some nice grisly kills (as in the original Sudden Death, fitness accoutrements are used to brutally devastating effect). Though Sudden Death was a theatrical flop, it has clearly developed enough of a following via home video and endless cable re-runs to warrant the VOD sequel treatment. A mid-credits scene reveals that one of our main villain Alpha’s henchman survived a locker room beat-down from White’s security guard Jesse. This fan’s fingers are crossed that Universal will treat us to an MJW-JCVD team-up for Sudden Death: 10th Inning, before either of them can stop doling out roundhouse kicks to bad guys.