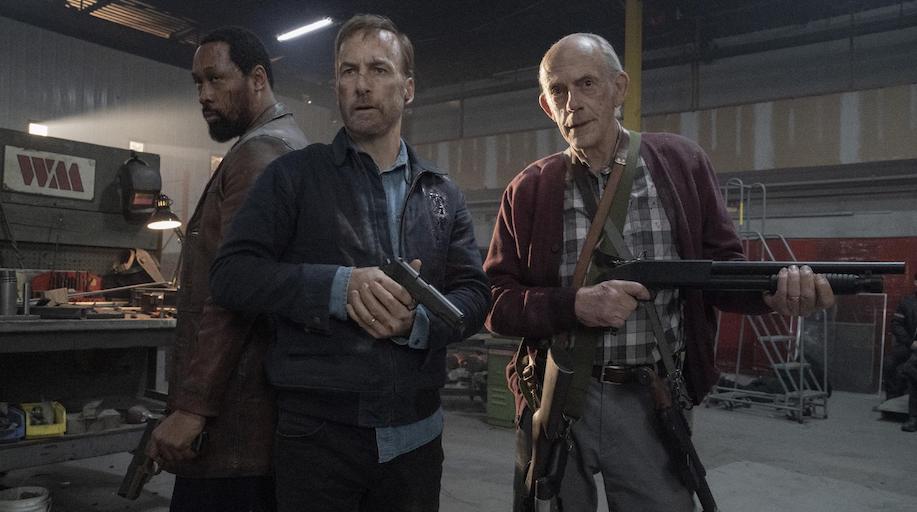 Welcome to the scintillating final chapter of our 2021 Streaming Wars saga! Check out the prior chapters here, here, and here. Thanks to our pals at JustWatch, we now have in our possession some insights into the fourth-quarter activities of all streaming platforms stateside, covering October through December of 2021, based primarily on JustWatch user engagement.

Will there be a 2022 Streaming Wars? Time will tell.

Netflix continues to ultimately reign supreme above all other streamers, but even across the past calendar year we’ve seen its market share among all Streaming Video On Demand (SVOD) avenues significantly shrink. 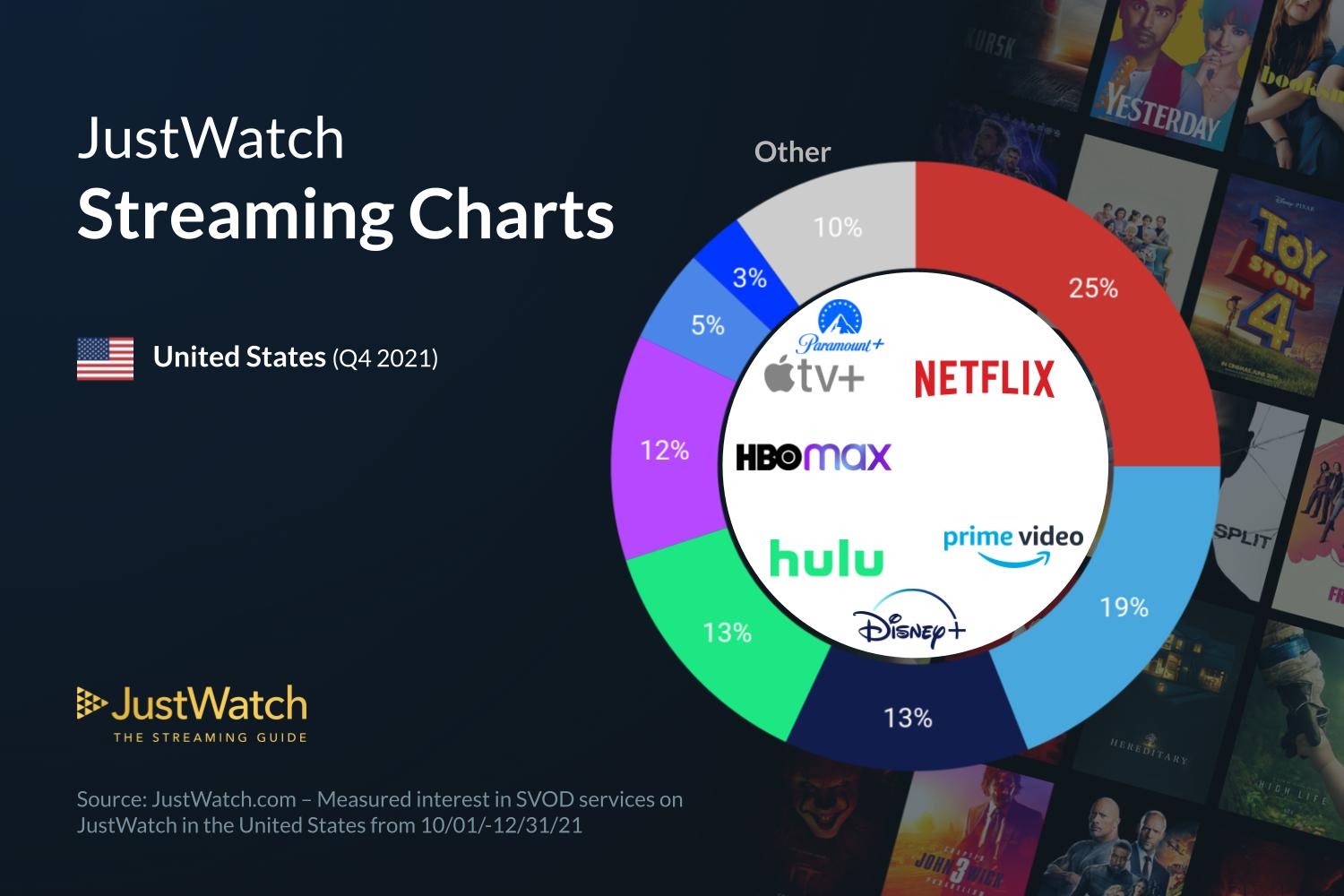 In the first edition of our Streaming Wars appraisal, Netflix enjoyed a 31% market share. That number (its ownership of all streaming subscriber eyeballs) continued to depreciate throughout 2021. In the fourth quarter of the year, the trend continued. Netflix had cornered “just” 25% of the market by year’s end, still more than anyone else, but a bit of a slide from its more-dominant 31% share to start the year. It maintained the same 6% edge of market share that it enjoyed over its closest competitor, Amazon Prime, during the year’s third quarter. Amazon Prime’s SVOD market ownership slid from 21% in the third quarter of 2021 to 19% in the fourth.

The top five streamers for the end of 2021 were rounded out by Disney+ (13%), Hulu (13% — now mostly owned by Disney), and HBO Max (12%). HBO Max posted the biggest quarter-over-quarter gains, growing by 2% of overall market share. It seems destined to overtake at least Hulu at some point in 2022 if this trend continues, though Disney+ always seems to have some kind of clever IP reboot up its sleeves that keeps audiences in its thrall.

Beyond the top five, Apple TV+ gained 1% in market share from the third quarter and concluded 2021 with its current most robust percentage of the market to date (per JustWatch), 5%, finishing sixth among streamers. Capturing 3% of the total market, Paramount+ also increased by 1% this past quarter.

HBO Max acquired a whopping 5% in increased market share over the course of 2021, making it the biggest gainer overall among all the streamers during the past year. Parent company WarnerMedia’s controversial decision to release its slate of theatrical features in day-and-date tandem on the streamer certainly could have had something to do with that big uptick in audience interest. 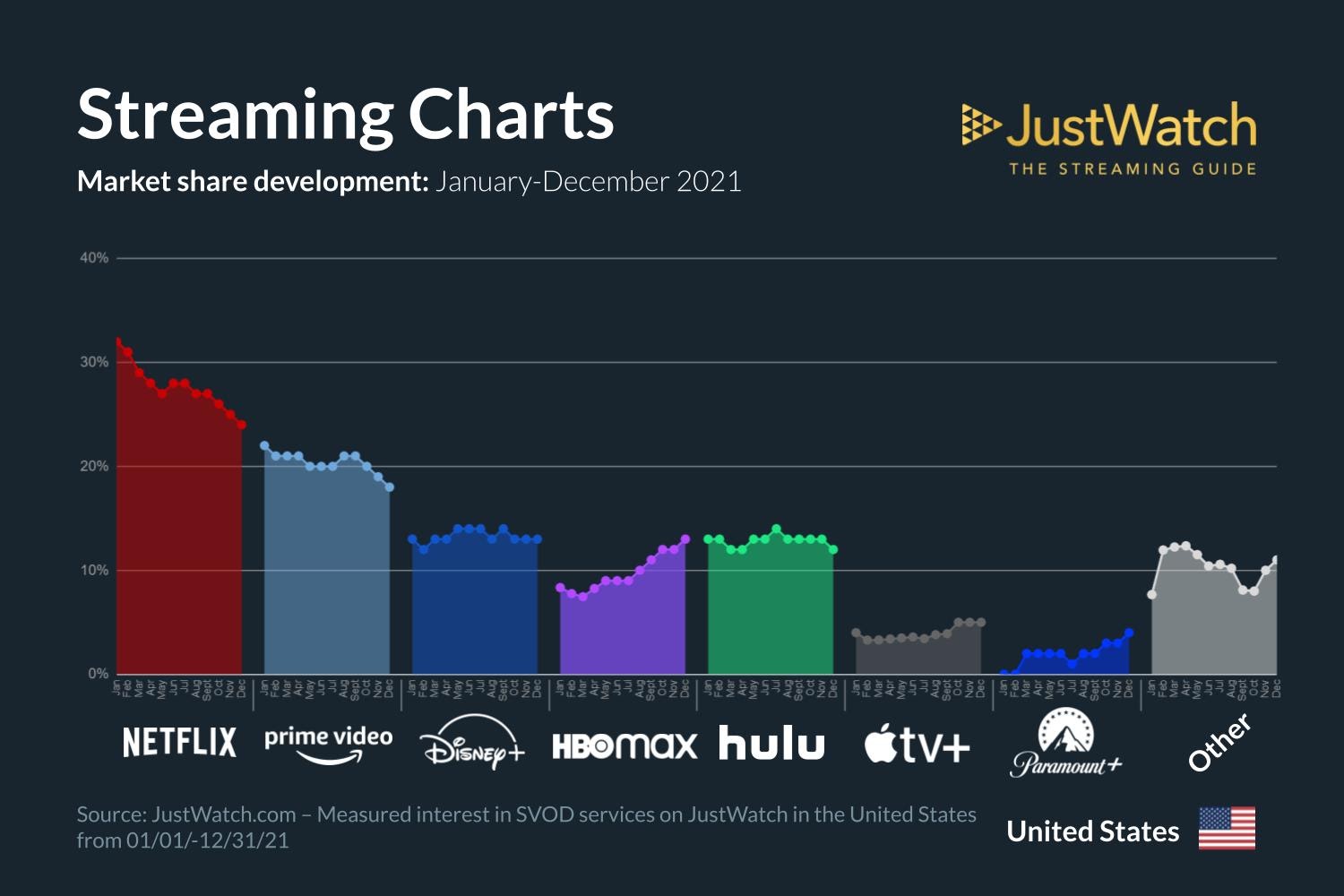 Big hits like Dune and Zack Snyder’s Justice League, plus 2020 holdovers like Wonder Woman 1984, Tenet and Promising Young Woman, all helped draw eyeballs to the HBO Max cause. HBO Max was also home to plenty of beloved evergreen TV titles, including South Park, The Sopranos, and of course Friends. Per JustWatch, HBO Max boasted four of the top most-popular film titles of the year stateside. A big caveat: JustWatch’s stats are predicated on these titles’ JustWatch popularity scores, and may not be reflective of actual streams. 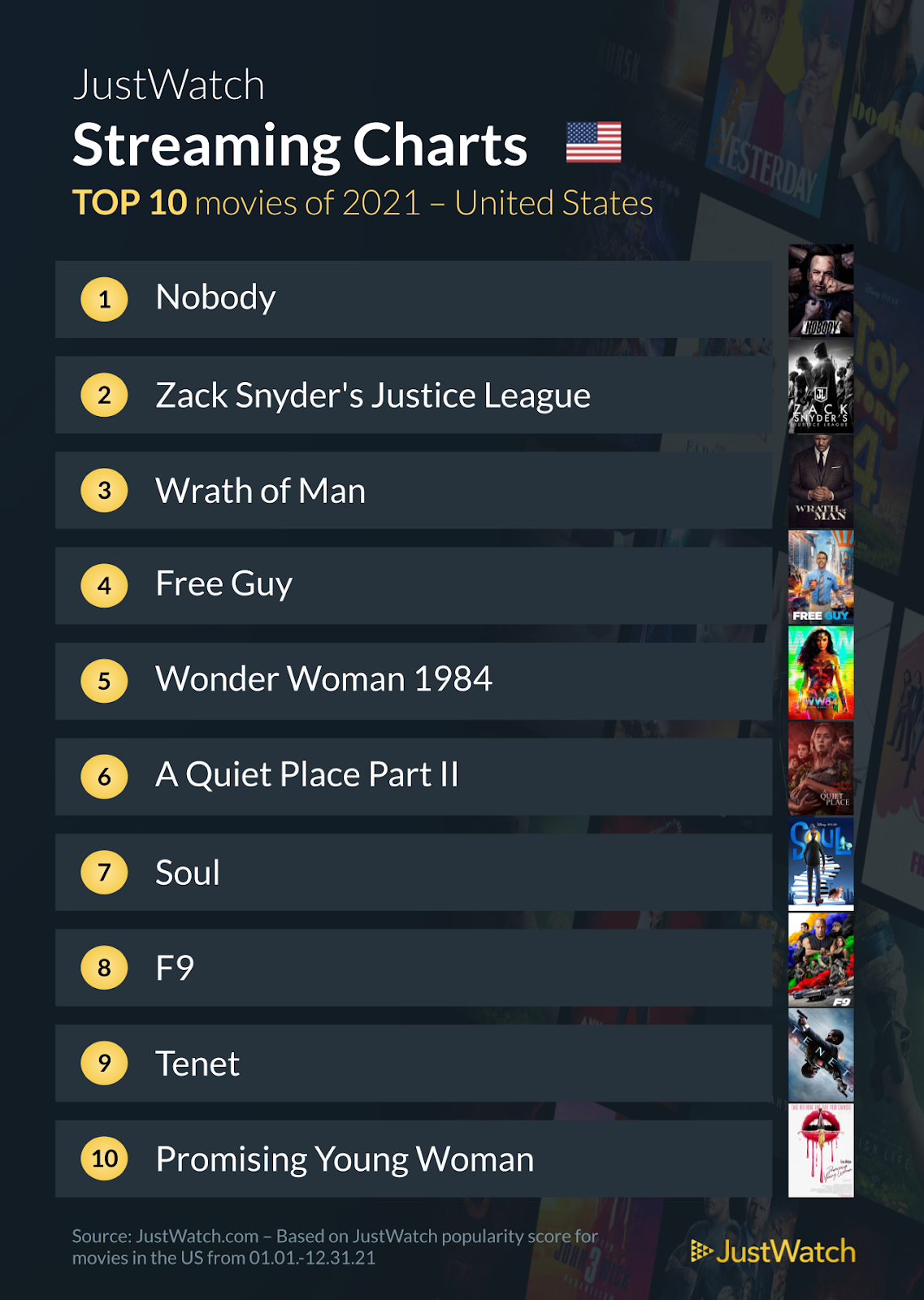 It’s a bit surprising to see just one Disney title, Soul, make the cut here. No Netflix originals make the cut here either. Incidentally, Ilya Naishuller, the director of the top-ranked picture listed, Nobody, was a guest on our Trailers From Hell podcast, The Movies That Made Me, around the time of the film’s release. Check out his episode here.