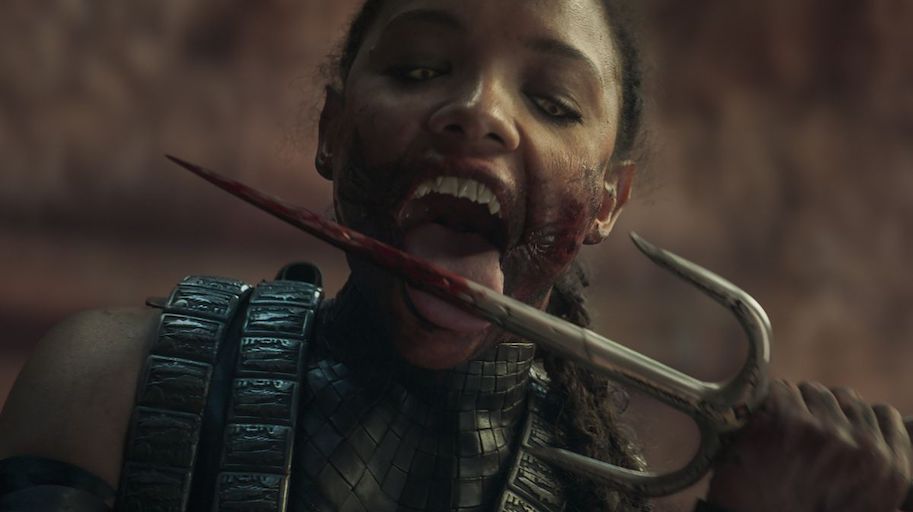 Today, we present the follow-up to our examination of the fraught battle between the big-money streaming sites, which covered the first quarter of the year, from January 1st-March 30th, 2021. Let’s take a look at the market shares of the various, still-expanding streaming services in the United States for the second quarter of 2021, covering April 1st-June 30th. Our friends at JustWatch have provided the research for this report, measured mostly through JustWatch user engagement.

Netflix continues to lead the streaming market by 8%, with a 28% share. Amazon Prime Video remains the second-biggest streamer, possessing a 20% hold of the market. Disney+, meanwhile, is gaining fast, having now overtaken its sister streamer Hulu to be third-most-streamed site of the second quarter (14% vs. 13%).

Relatively new upstarts like Disney+ and HBO Max, from WarnerMedia (soon to be re-branded as Warner Bros. Discovery), have effectively diluted the market dominance of long-lasting streamers Netflix, Prime Video and Hulu (mostly owned and fully controlled by Disney, with NBCUniversal’s parent company Comcast holding a third of the company that can be sold off in 2024). Not all the newbies have been as successful, however. Apple TV+ offered a free trial to goose its streaming numbers, but Apple TV+ (4% of the market) and Peacock Premium (3%), from NBCUniversal, both lag significantly behind HBO Max (9%), which appears to be gaining ground on Hulu itself. 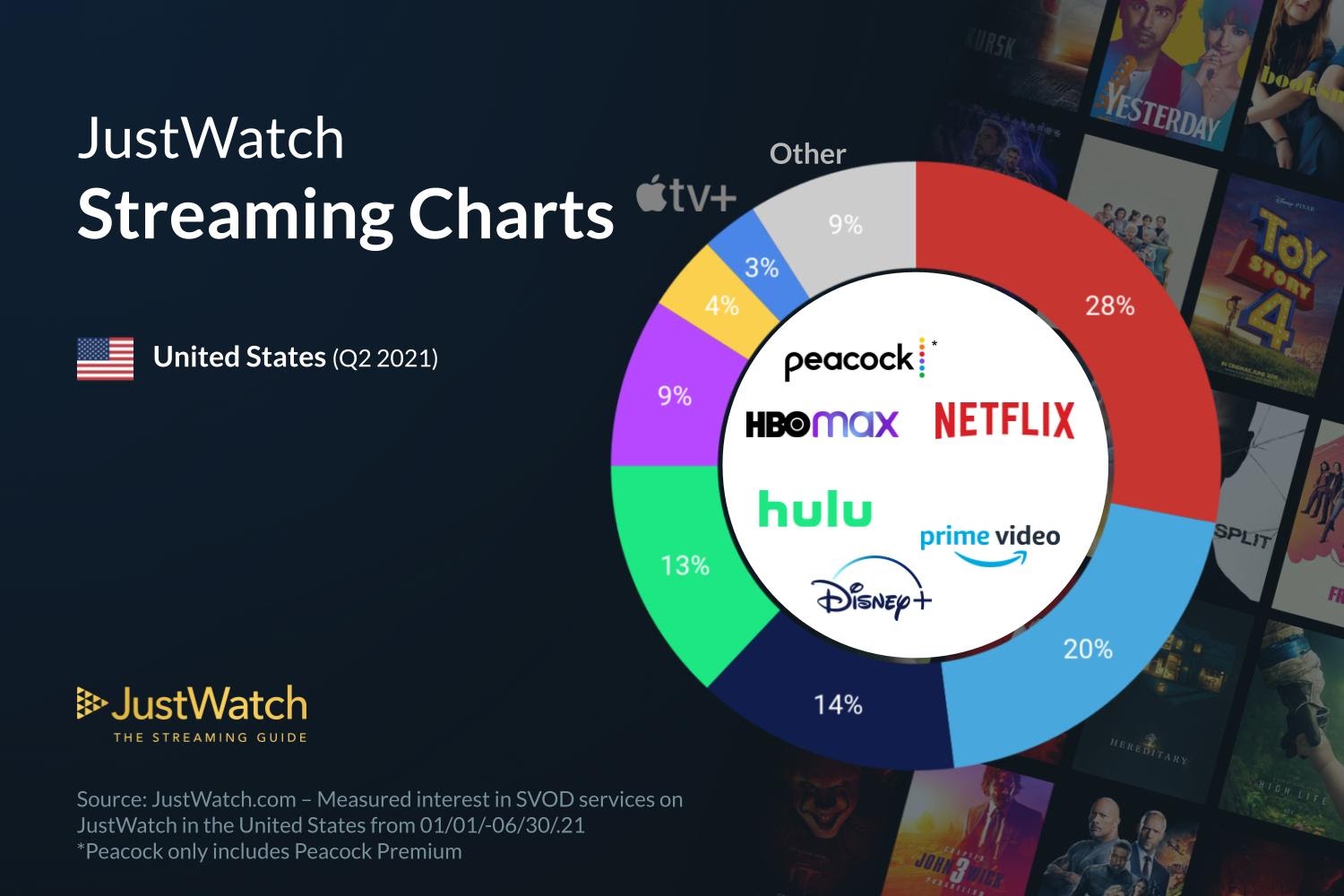 Thanks to research from our JustWatch comrades, some trends have emerged in the development of streamers’ market shares in this second quarter. Disney+ and HBO Max were the only two streaming sites (Streaming Video On Demand, or SVODs) to actually post increases in their market share (+1% each) through the quarter. Netflix and Prime Video took big hits, with Netflix losing 3% of the market and Prime losing 1%.

As a bonus list per JustWatch, here were the top 10 most-streamed films during the second quarter of 2021: 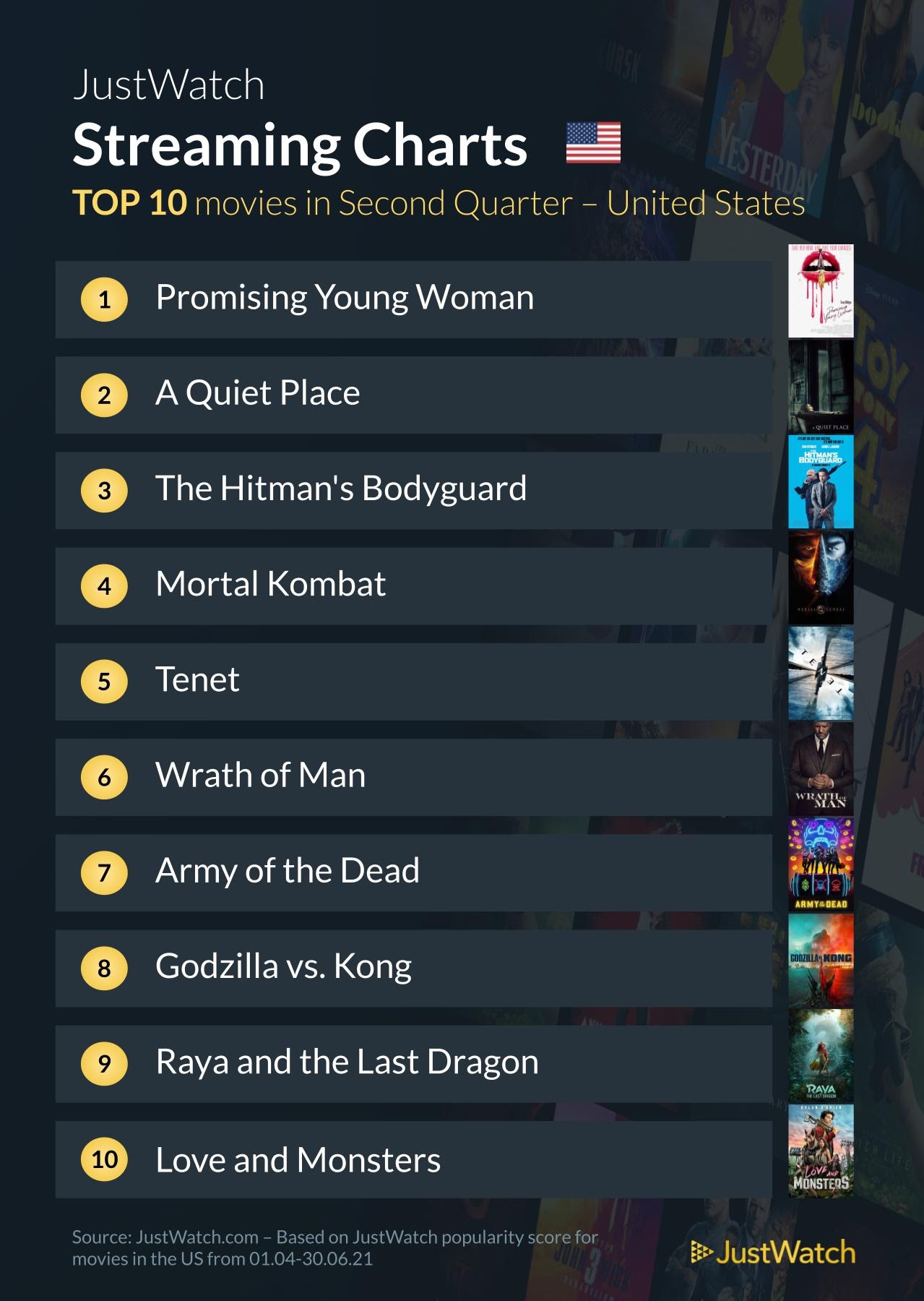 Two films helmed by actors, Emerald Fennell’s Promising Young Woman (2020) and the original John Krasinski-helmed A Quiet Place (2018), top the list as tops among the American cinematic options streamed the most during the second quarter of the calendar year. Clearly, audiences were excited to prep for A Quiet Place Part II (2021), which brought in $155.3 million domestically, a very lucrative haul in the post-vaccine era.