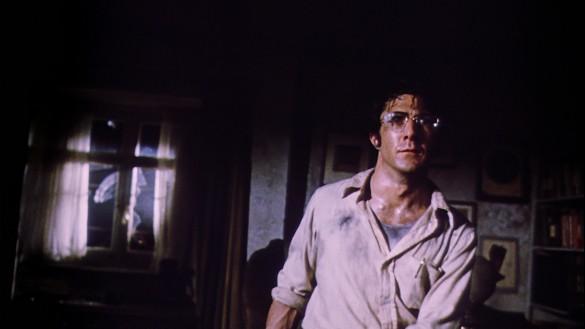 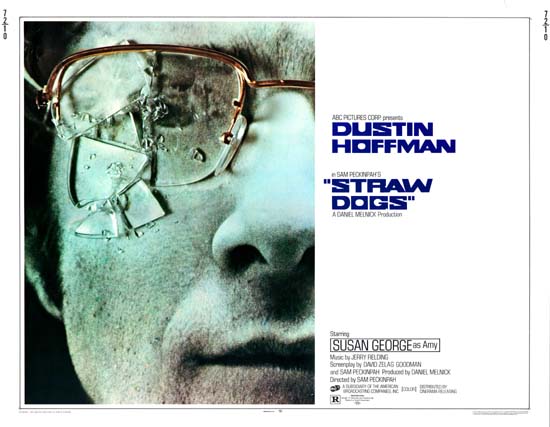 Dustin Hoffman defends his home against murderous thugs in strong, violent melodrama with appeal to both discriminating trades and the blood- and-guts fans. Rating: R.

Director Sam Peckinpah’s fascination with violence as man’s most basic instinct finds new and disturbing expression in STRAW DOGS, a difficult, harrowing film which is in essence a long, slow-burning fuse leading to an explosion of bloodshed. On the whole, the ABC Pictures Corp. production possesses a nightmare intensity few horror films could match, and this should be a factor in drawing both serious filmgoers and the mayhem-minded masses. As an action entry, the Cinerama release has the requisite sex and brutality to pull them in, while Dustin Hoffman’s presence an the lead assures the interest if not the wholehearted enthusiasm of the general market trades, who may be put off by tile unsympathetic, even cowardly nature of his role. Gordon Williams’ novel THE SIEGE OF TRENCHER S FARM has been heavily re-structured by Peckinpah and writer David Z. Goodman to provide a vehicle for Peckinpah’s primal thesis. His direction is forceful, assured and unwavering in its emphasis on the more alarming aspects of human behavior.

Hoffman is a meek American mathematician who moves with sprightly English wife Susan George to her isolated farm on the Cornish seacoast, where life will hopefully be less demanding and the marriage will go a bit smoother. Hard-drinking local rubes who covet the sexy Miss George think Hoffman a despicable weakling and treat him accordingly. Incredible tension develops as their demeanor becomes more and more threatening. The couple find their cat strangled, hanging in a closet, but Hoffman does nothing. The locals entice him out hunting, and steal back to rape his wife while he’s gone. Though humiliated, Hoffman still takes no action. After village idiot David Warner (unbilled) accidentally strangles a flirtatious teenager, he runs into Hoffman’s car and is taken to the house. The girl’s hulking, murderous father (Peter Vaughan) leads a drunken crowd trying to wrest Warner from the house and kill him. Only then does Hoffman assert himself, declaring “I will not allow violence against my house.” During the pitched battle that follows, a couple of people are shotgunned, one is beaten with a poker, another’s foot is shot off, and one more is dispatched in the giant jaws of an antique trap. In the end, Hoffman is transformed into a killer fully as bestial as his attackers, and enjoys it. Such, says Peckinpah, is the way of man.

The point is blunted, however, by the effect of the “siege” itself, which though not without some inherent shock value, is simply not, in fact, violent enough to provide the catharsis the film has so carefully built toward (much of this may be due to the domestic cutting imposed to avoid an X rating). The result is a nasty and rather unsatisfying experience. Hoffman evolves from whining egghead to mass murderer, leaving the film without a hero, but the performances are otherwise good. Johnny Coquillon’s location photography and Jerry Fielding’s music are top-notch.