Small thief and parolee Max Dembo is pinned in a parole system that all but guarantees he’ll go back to robbing banks and jewelry stores. Dustin Hoffman has one of his best and most unusual roles, taken from the story of a real bank robber. Directed by Ulu Grosbard, the docu-drama look at the seedy side of Los Angeles is graced with a perfect cast: Theresa Russell, Gary Busey, Harry Dean Stanton, M. Emmet Walsh, and Kathy Bates. Sure, the rotten parole officer drives Dembo back to crime, but pulling jobs is in his blood. It’s one of the best portraits of a criminal ever. 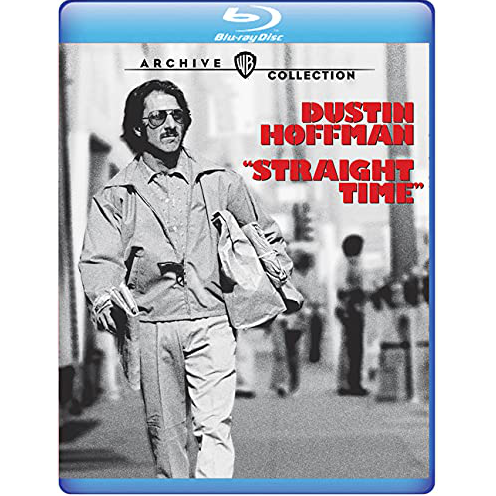 Moviegoers have always loved crime films. Criminal behavior attracts us whether the thieves be smart, dumb, rich, poor, sophisticated or crude. It hasn’t mattered if the movie is realistic or fanciful, funny or serious.

Few crime thrillers become monster hits are not big hits, but the best keep their good reputations forever. Critics hailed director Ulu Grosbard’s Straight Time as a winner right away, but the crowds didn’t come. It was an ‘acting prestige’ picture for the big star Dustin Hoffman. In 1978 Straight Time was an unusually un-glamorous look at life in the larcenous lane.

The underappreciated Ulu Grosbard (The Subject Was Roses, True Confessions) presents an insightful study of petty criminality derived from a novel by Edward Bunker, a real bank robber who also contributed to Runaway Train. Dustin Hoffman gives one of his best performances as the burglar Max Dembo, a wholly untrustworthy but by no means villainous man. Presented in a low-key manner on real Los Angeles locations, the show dramatizes the forces that steer parolee Dembo right back to the criminal life. 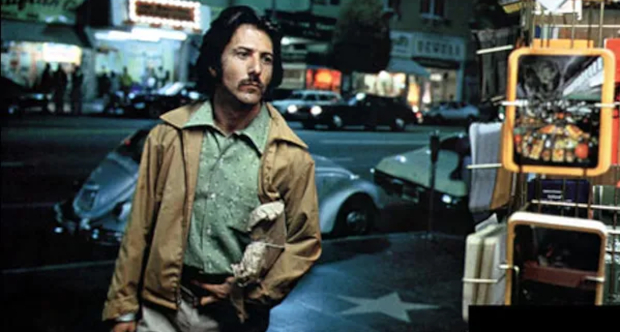 Convicted armed robber Max Dembo (Dustin Hoffman) finishes a six-year stint in San Quentin and considers going stright, but the public servant in charge of supervising him makes that all but impossible. Parole officer Earl Frank (M. Emmett Walsh of Blood simple) is a power freak who delights in humiliating and dominating Dembo, who is powerless to do anything except submit. Max takes a job in a can factory and initiates an affair with Jenny Mercer (Theresa Russell), a woman from an employment agency.

Dembo can’t resist violating his parole by looking up his old cohort Willy Darin (Gary Busey), a heroin addict. Darin uses Dembo’s room to shoot up, and when searching Frank finds a burned matchbook. Dismissing Max’s protests, he has him booked for suspicion. When Frank announces his intention to exert more control, Dembo revolts and jumps bail. Teaming up with his old associate Jerry Schue (Harry Dean Stanton), Dembo embarks on a new string of violent robberies. The bank and jewelry store heists are fairly well planned, except that the unstable Max has developed an unwise habit — he continues to grab up loot way beyond the ‘safe time limit’ when the cops can be expected to arrive. 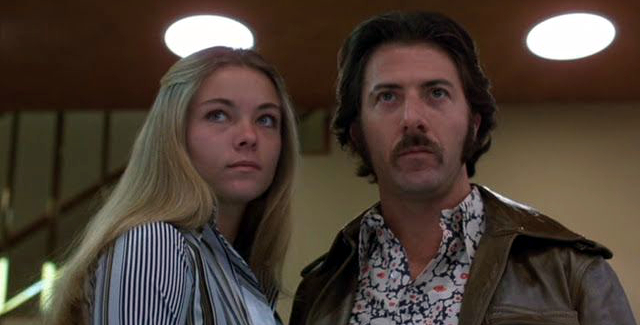 The last time I looked Dustin Hoffman wasn’t weathering the #MeToo storm very well. But Hoffman was a top screen talent, no question. He was once associated with performances based on tricks and gimmicks, like his limping, heavily-accented Ratzo Rizzo in Midnight Cowboy. To my mind he’s better when he relaxes into straight character roles, as in Kramer vs. Kramer. Hoffman underplays the ‘undeserving’ loser Max Dembo beautifully. Max is grateful for Jenny’s affection but not above using her apartment as a headquarters for his criminal activities. He takes her to a fancy restaurant and then suggests that they should just walk out on the check. He visits the obviously unstable Willy Darin and is crushed when Darin’s wife Selma (a very young Kathy Bates) asks him to stay away; Willy has no defense against bad influences.

Max is an intelligent guy crushed by his time in jail but too proud to take the abuse of his parole officer Earl Frank, who seemingly wants Max to revert to crooked form. Frank acts like it’s no big deal to stick Max in jail for a week, even after a negative drug test. Frank then pressures Max to rat on Darin with the threat of sending him to strict supervision in a halfway house. That’s too much to bear for Dembo, who doesn’t want to lose the relationship he’s formed with the understanding Jenny Mercer. He runs Frank’s car off the road, handcuffs him to a chain-link fence with his pants pulled down, and leaps headlong back into serious crime. 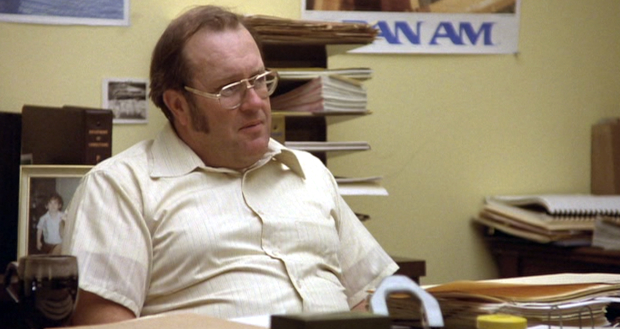 That key scene with actor Walsh with his pants down appears to have been shot off the cuff in a familiar downtown Los Angeles location, in full view of the public. Director Grosbard and cameran Owen Roizman (The French Connection) create a convincing docu-drama look, often using long lenses so that Max appears to be ‘spied on’ from afar.

Max has difficulty finding reliable associates, and chooses to rob a convenience store and burglarize a pawnshop on his own. A connection in a bar (played by author Bunker) finds him one good partner in thievery, but the man is never available. We then see Max at a backyard barbecue with ex-crook Jerry Schue. Schue’s cute wife Carol (Rita Taggart) serves burgers and makes small talk about her husband’s happy reformation, but as soon as she’s gone Jerry looks to Max and yelps, “Get me out of here!”  Jerry’s going nuts in straight suburbia and wants to return to the robbery racket. Max and Jerry have developed a need for criminal action. 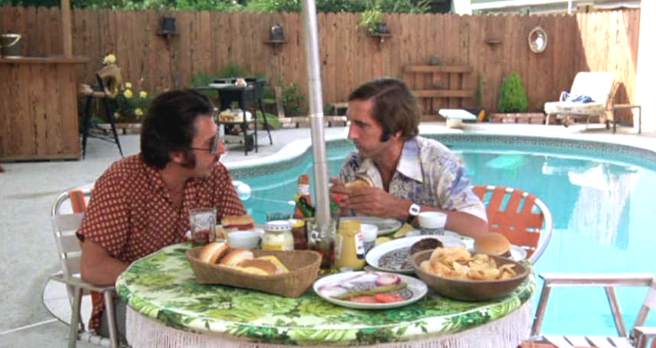 Dembo and Schue leap into a predictably ragged crime spree, and Straight Time spirals toward a logical conclusion. Previously efficient and smart, Max can no longer discipline himself during his robberies. While Jerry wails that their time is up and the cops will catch them, the stubborn Dembo keeps emptying teller’s drawers. Grosbard and Hoffman really ratchet up the tension in these scenes.

During the robbery of a Beverly Hills jewelry store Max again overstays his welcome, and the getaway driver chickens out under the strain. In just a few seconds everything goes to hell. Max is able to blow town with Jenny, but realizes that his capture is only a matter of time — his messy crime has made too big of a splash. His bundle of stolen jewels is now too hot, a liability. He can’t even give Jenny a fancy watch without dragging her in as an accomplice.

The emphasis on unglamorized havoc and the inevitability of failure is what distinguishes Straight Time from clever or gimmicky escapist thrillers, the kind in which crooks have a fine time running wild, even if they’re soon caught. Dreams of perfect crimes evaporate under the bright light of reality, where nobody’s plans every go off just as predicted. The story of Max Dembo feels real: the same personality factors that make Max a good crook, also combine to guarantee dismal failure. 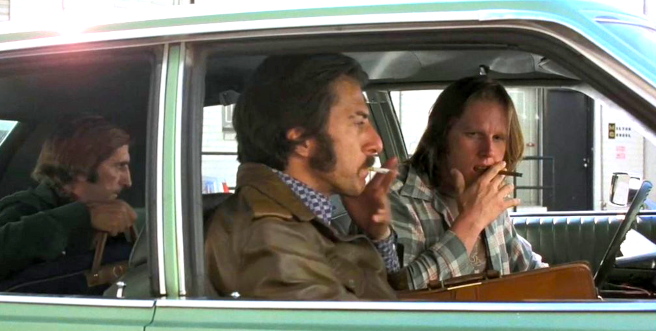 The show qualifies as a solid neo-noir in the semi-docu style. The film delivers scenes of nail-biting tension, but instead of a violent action set piece, the finish comes when we understand Max’s predicament, and see his hopes fade away. We can see the glaze forming on his eyes as he realizes that he’s run out of options.

Straight Time is a great place to observe a fine cast being used especially well. The cult figure Harry Dean Stanton is as his very best, along with the always-mysterious Theresa Russell and the almost unrecognizable Kathy Bates. It’s also an early opportunity to appreciate M. Emmett Walsh before he became so memorable working with Joel and Ethan Coen.

Hollywood wants upbeat endings, which in crime films usually play as false no matter how well confected. Honest movies about garden-variety crimes have to end badly — everybody suffers, especially people compromised by the criminal’s activities. Straight Time works because it involves us deeply in Max Dembo’s situation. He’s neither a martyr to the system nor a generic bad man. Dembo just is, and Hoffman’s rich character portrait is satisfying in itself.

The Warner Archive Collection Blu-ray of Straight Time accurately reproduces Owen Roizman’s just-the-facts images, capturing accurately the sunny California ambience in factories, cheap apartments, office blocks and the oppressive police and prison systems. The dingy room that Dembo must live in while monitored by his sadistic parole officer is enough to make anyone rebel. When you see the film’s vision of dirty city streets and hazy roadways crammed with utility lines and advertsing, all we Los Angeleons ask is that you try to believe that much of the city is very attractive.

The extras come directly from the old DVD. A vintage making-of featurette shows author Edward Bunker and other ex- bank robbers serving as on-set consultants to nail down the film’s technical details.

Director Grosbard and Dustin Hoffman provide an entertaining audio commentary, talking separately about the production. This time Hoffman had a big hand in developing the movie, so it’s easier to take his suggestions that his creative role extended into writing and directing as well. Hoffman cast the film before Grosbard came on board and says he would have directed it too if video playback had been available.

The star’s account of his preparation for the role is good listening, as is his probing of author Edward Bunker’s skewed ideas about personal responsibility and criminal conduct. Hoffman asked if he would feel responsible if a stray bullet from one of his bank holdups killed an innocent child, and Bunker said no. He reasoned that, because people know that banks can be robbed the mother of the child would be responsible. She should have kept her child safely away.